The Far Out Ones: Tim Durtschi

Tim Durtschi is probably best known for bringing big tricks to the backcountry. But for him, skiing is a whole lot more than that. Having been around since the dawn of freeskiing, Durtschi has just about seen it all. Over the years, his career has taken him from the X-Games, competing alongside the likes of slopestyle and halfpipe legends Simon Dumont and TJ Schiller, to pioneering booters like Utah’s Chad’s Gap, to finally skiing big lines all over the world on the silver screen. In 2013, he even won the coveted Best Male Performance at the Powder Awards for his segment in the TGR’s Way of Life. These days, not much has changed. Durtschi is skiing stronger than ever before, cementing a legacy as one the most creative backcountry skiers ever. This year, after exploring gnarly terrain in Europe, he packed up his sled and set out to the tiny town of Terrace, BC to see what the pillow hype was all about. The powder bender continued as he returned to Jackson to finish up a segment with Kai Jones, then finished out his season doing what he does best: teaching the next generation the ways of a true skiing ninja. We caught up with Tim and chatted about the season, filming, Tim Horton’s, and what goes through his mind on top of a gnarly line deep in the backcountry. Be sure to check out his skiing in TGR’s upcoming film Far Out, Presented by REI.

Tell us a little about your history. Where did it all get started?

I grew up in Alaska, and started skiing when I was 2 years old, thanks Mom and Dad! I was inspired by JP Auclair and the new Canadian Air Force and the new events like X-Games and the US Open. Living so far away from all the action going on in the ski world, my heart was set on moving to Oregon and qualifying for those slopestyle and halfpipe events. There were so many people to look up to in the early 2000’s!

I was most inspired by people who didn’t do contests, like Sage Cattabriga-Alosa, but there was so much progression going on in the contest world that it was really where I wanted to be.

What do you count as the biggest breakthrough moment in your career?

Looking back it is hard to point out a specific turning point or moment that I would consider a breakthrough. I guess I got lucky getting to meet the filmers at Rage Films, who then introduced me to the guys at Poor Boyz, who then introduced me to the TGR crew. For me, it was always about getting as many progressive and unique shots in a season. I was lucky enough to always have the best filmers with me capturing that footage and always having the drive and motivation to get that next banger shot. 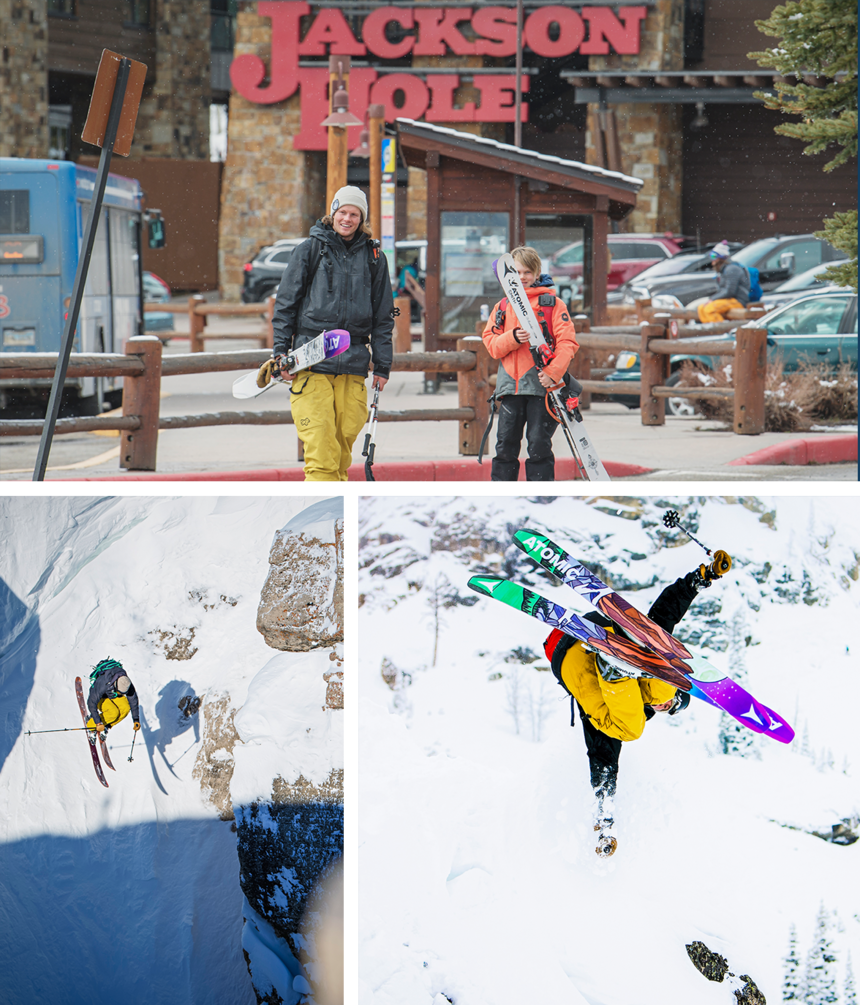 A series of images from this season pay tribute to what Durtschi loves most about skiing. Cliffs, spins, and mentoring the next generation of rippers.

How about a low point? Any sort of injuries or major setbacks you have had to overcome?

Crashing on Chads and waking up in the hospital was a crazy scenario. I was lucky to have my friends there to tell me what happened, I mean I have some faint memories of skiing down Grizzly Gulch with the first responders. Once I got to the bottom it was just being super dizzy and getting into the ambulance. That was a physical experience that was extremely hard, but the thing people don’t talk about as often is the mental side of skiing. The mental game can cause setbacks and low points just as much a a physical injury.

Skiing for a living is crazy. Even just as a lifestyle, there is a lot of stress. I have taken a step back and tried not to be so hard on myself, like if I don’t land a bigger, better trick than I did before, I realize that’s ok.

I used to beat myself up over little things like that. You don’t have to triple backflip every day to be a pro skier! For the hard-charging side of my brain, that’s been something that is hard for me to accept. I want to share the experience of skiing and share the value of being safe in the backcountry with people. It has been so hard losing heroes and friends literally doing the exact same thing I am doing.

This year, seeing Bryce Newcomb moments before his accident was so hard. We were out in Cody bowl, on a sparkling bluebird powder day, out there having the best day of the season and ya know, bad things can happen even when you are managing the risks and using all your knowledge to be safe. Losing JP Auclair was also so hard for me. He gave me an opportunity to heli ski in Alaska, I will never forget that invitation. But most of all, he taught me that giving back to the next generation of skiers is more rewarding than anything else. 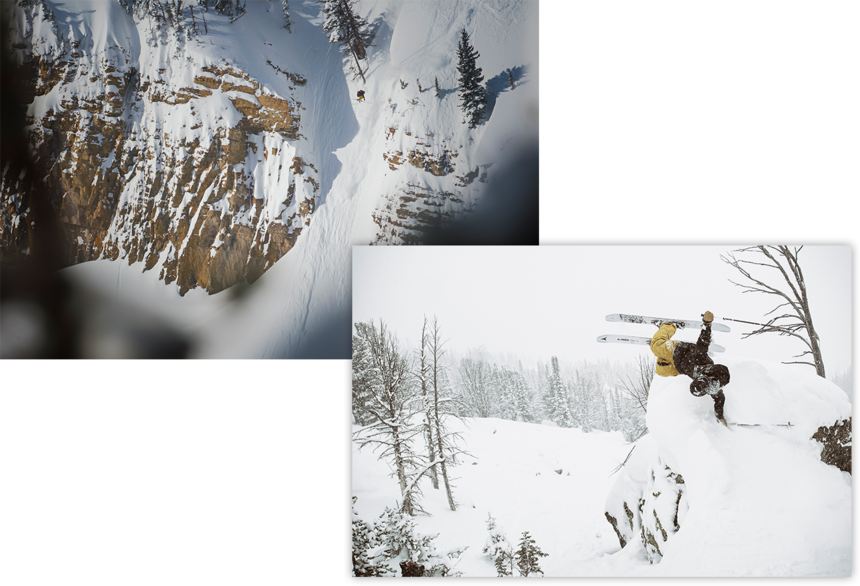 Whether it was jibbing pillows in Terrace or sending classic Jackson Hole airs, Durtschi loved every second of this season.

Tell us a little about filming for Far Out. This year, you joined Parkin Costain and Colter Hinchliffe in Terrace, BC. What keeps drawing you back up there, and what went down up there this winter?

Terrace was super new to me. I knew there were mountains between Whistler and Alaska, but I just had no idea until really looking into it what was out there. I have driven the Alaska Highway before so I knew there was a lot of terrain out there, but when you’re road tripping like that there is not really time to really look around. Colter and Parkin were good adventure partners to have because there was not much stress the first few days of exploring. We just had a feeling, that with enough time on the sleds, we would find some 5-star zones. The sled zones were pretty rugged, lots of logging trails with dead ends, it was trial and error most mornings, flipping coins at road junctions and turning the sleds around.

There was a lot of love for the mountains in Terrace and we felt truly lucky to be able to experience it.

Colter did a lot of researching before the trip and found a guy named Brad Zeerip that posted a bunch of Gopro videos around Terrace. We reached out to him online and he invited us over to zoom in and out of Google Earth maps at his fishing lodge on the Skeena River. He was super supportive of our goals and was excited to share some of his favorite ski locations (while still keeping a few of them secret). We even invited him out on location, and spoiler alert, he will have some of the best reaction shots in the movie this year! Looking back on the trip we would have felt pretty lost if it were not for Brad, so a huge thanks to Colter for putting in the extra effort to try and meet some local Terrace powder hounds.

Ski mountaineering has also made its way into your portfolio. We saw some big spring missions this year, but what draws you to these kinds of lines over a big booter or a pillow line?

Ski mountaineering is something that I have gotten more into lately, I love the challenge and if I am going to put in a ton of effort to climb up something I want to be able to ski down, simple as that! One line Colter and I skied called Temple crag was definitely the most challenging thing I have done so far. We took off our ski boots mid line and climbed up 5.7 rock with skis on our back! That was something new for both of us and we both were really excited to attempt it and be successful. To be honest, we thought we were a little crazy for thinking it was doable. Another new experience for me on that line was being on such a steep face that I was too scared to hop turn. It was, steep, icy and 100% a no-fall zone. I was clutching my ice ax and Colter had to assure me that it was possible (he had just done the section). My biggest fear was binding failure, I was wishing my skis were shorter, haha but that was one of the scariest moments I have had on skis, and working my way through that fear was one of the greatest joys I have had from skiing.

When you are so deep in the backcountry, what's your mindset like? What goes through your head when your standing on top of a potentially dangerous feature miles away from any help?

I definitely had that feeling this year in Terrace. We were on a mission where we took the sleds out to camp and then were a few hours from the sleds where we were actually skiing. I think the one thing that kept me grounded was standing up there with my buddy Colter. Snow conditions were weird, and being able to talk out loud to someone about that is incredibly valuable. If you are all alone, you are going to get in your head and maybe ski that line with all sorts of negative thoughts. Being in the backcountry with a solid crew is the key to a safe film shoot and everyone out there knows what to do if there is an emergency. 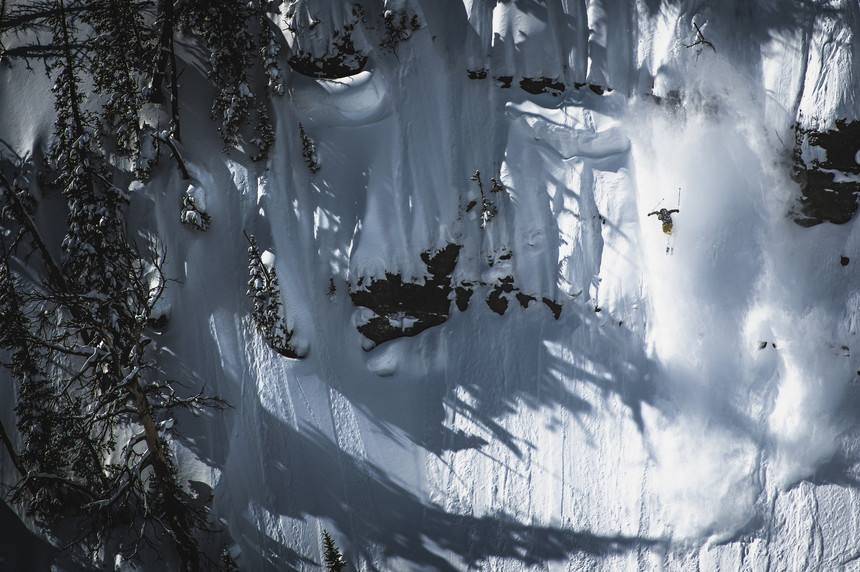 These days, you seem to be a bit of a mentor for the younger generation and spend a ton of time coaching and mentoring the next group of rippers. You skied with Kai Jones in Jackson and at Windells, what’s it like skiing with the groms these days?

Man! Skiing with Kai was so fun, he has so many goals for being so young it really was impressive to see him throw down. My favorite thing about skiing with Kai at Jackson was that we would do some filming in the morning and then he would just want to lap the tram until it closed. It is just so much fun to be around people with so much enthusiasm and drive to ski every minute they can. Kai was on spring break and there was absolutely no way he was going to take a day off from skiing because he had to go back to school so he had to take advantage of every moment.

Windells was great, I learned so many tricks over there when I was younger so it was inspiring to see Kai do the same. Camp is six days and some kids take a day off to skateboard or go river rafting but, again, there was no way Kai was taking a day off. We skied hard and he learned a bunch of rail tricks and some new flips. It’s exciting to ski with Kai cause he loves every aspect of skiing, he’s not going to skip the rails cause he does big mountain comps, he just wants to do it all!

What direction do you see yourself taking in the future? What's next?

There’s really not much more to say than this! I want to keep skiing professionally and when I am too old to film, find a way to give back to skiing and the future of the sport, because I love it and it has given me the best life 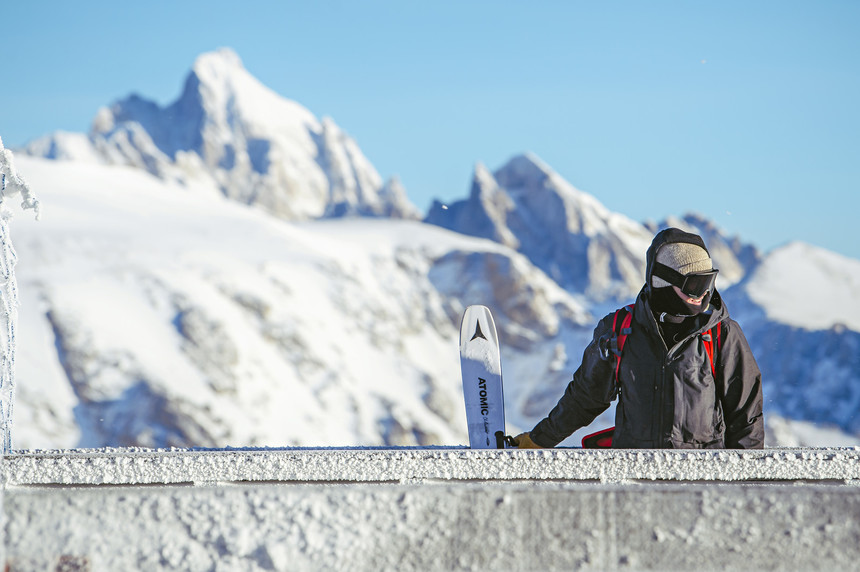