This mom of three broke into mountain biking after having a family...and she's bringing her three kids along for the ride!

A bright magenta full-face helmet is bobbing through the tall grass next to the Crabapple hits at the Whistler Bike Park. It belongs to the six-year-old Alora Gibb, who greets me with a mischievous smile underneath her constellation of freckles as she walks towards me. “When is mom going to go,” she says, impatiently glancing towards a daunting set of jumps. I get a text from Kaylee Gibb alerting me that she’s ready, and I grab Alora’s hand as we scurry to the safe zone on the side of the jump.

I don’t need to be warned that Kaylee’s coming. I can hear her. She yips with glee as she soars over the four pack. Her cheers are matched by Alora’s, who giggles and claps her hands while watching her mom fly through the air. When Kaylee pushes her bike back up the hill she’s eager to session the sequence again, so I can photograph from a different angle. Alora happily plops down in the dirt next to me. After all, this is all part of their usual family routine when they’re up.

“It takes some zeal to bike, but the reward is insane”

It starts with loading their bikes—Kaylee’s Pivot and Alora’s hot pink Norco—down at the Fitzsimmons high-speed quad. “She’s my mini-me,” Kaylee tells me while adjusting her daughter’s helmet on the lift. Alora’s still getting the hang of mountain biking, and despite the occasional crashes she picks herself and gets back on the saddle. “It takes some zeal to bike, but the reward is insane,” Kaylee says. And that feeling is what keeps her going.

Once unloaded they take Alora’s favorite route through the bike park, Easy Does It. Along the way we take a mandatory pit stop for huckleberries. Most Whistler riders fly by these treats at mach speeds, but when Kaylee spots them, we immediately veer off onto the shoulder to start picking. Quicker than most black bears, they fill their palms to the brim with the little blue gems in mere seconds. It takes them half as long to consume them. Bellies full and hands smeared with purple and blue stains, we return to the bikes to continue along. We eventually approach a fork in the road with small side trails known as Rod or Todd. Kaylee lets Alora lead the way until it’s time to cut over to the Crabapple hits. Watching Kaylee catch some air is always Alora’s favorite part and a staple of their mom and daughter date.

Hike a bike can be a team effort. Katie Lozancich Photo.

I first met Kaylee a few days prior at the annual Crankworx Liv Ladies A-Line event, during which Whistler’s most iconic trail is opened to 150 female mountain bikers for a private 3-hour shred fest. I’m perched underneath the opening drop and waiting to photograph the oncoming participants. I watched as Kaylee came tearing through. Her red hair billowed behind her like a lion’s mane as she confidently cleared the feature. As I photographed each notable hit on Whistler’s most recognizable jump trail, I felt her presence. Sometimes she was riding solo and other times she led the charge for a lady train of young rippers.

After the riding wrapped up for the day I spotted Kaylee in the crowd at the GLC enjoying some celebratory pizzas. She wasn’t originally going to ride today because it was a Sunday, a day she usually reserves for church or time off. But the inclusivity and positivity of this event were too important to pass up. 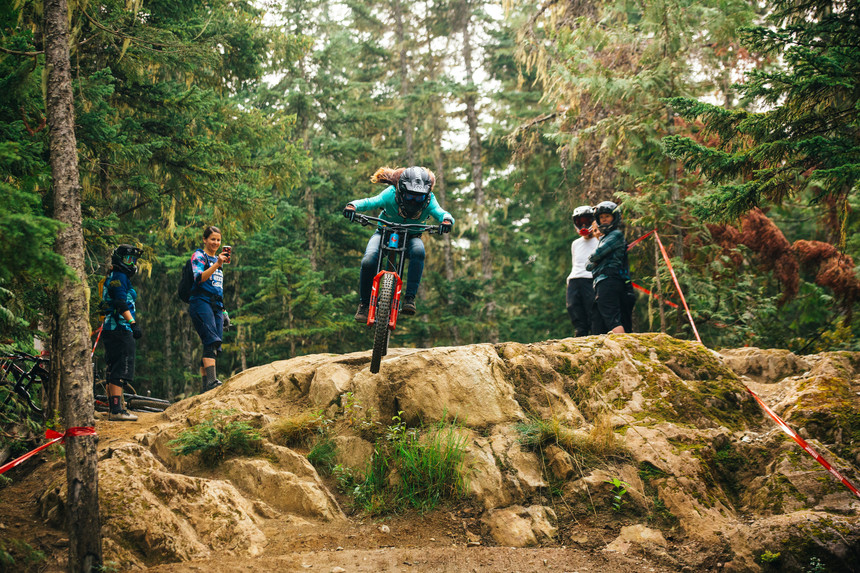 “There’s a lot of women who ride who aren’t super confident but want to be,” she explains, and as someone who can clean A-Line with poise, she wants to help fuel the stoke for the other gals. “I had two people come up to me and thank me for the encouragement I gave them on the jumps,” she says. For her, encouraging others pushes her to ride, because not too long ago she was finding her own footing in the sport.

“I was deathly afraid of biking,” she explains while reflecting on the first time she touched a mountain bike in 2004. As a girl who grew up in the middle of Iowa, mountain biking wasn’t exactly accessible during her youth. Instead, she first discovered it while on a trip to watch Red Bull Rampage with friends. The following summer, her future husband Ryan Gibb, whom she met at Rampage, whisked her up to Kamloops. They rode iconic local spots like Rosehill, and Kaylee was hooked.

“I was blown away immediately by how much confidence and skill she had,” Ryan explains. That was high praise coming from a director who worked with the likes of Cam McCaul and Brandon Semenuk in his acclaimed bike film Life Cycles. “After that one ride, I just kept thinking that this girl needs to get into mountain biking.” He recognized her aptitude in moments like when Kaylee took a hard fall and ended up tearing up her knee. Most beginners would be deterred by a crash like that, but Kaylee tenaciously grabbed her bike and went back uphill. She knew she could ride the line out—and she did. The more she invested in the sport, the more the idea of making a career out of it enticed her. But there was something she wanted to do first: have a family.

Choosing not to sacrifice, Kaylee became the mother to three energetic children. According to her it continues to be one of the most fulfilling and best decisions she’s ever made. She’s ecstatic about being a mom. But since she and Ryan decided that they weren’t going to have any more kids, Kaylee has shifted her attention back to her bike. They moved their family to the mountain biking mecca of Whistler, and riding came back to her naturally. In no time Kaylee was eyeing the Crabapple hits and other prominent lines.

During that seven weeks of calling Whistler their home, she progressed quickly, to the point that the notion of going professional didn’t seem so crazy. Plus, as a 33-year-old mother, riding her bike would teach her children one important lesson: It’s never too late to pursue your dreams. 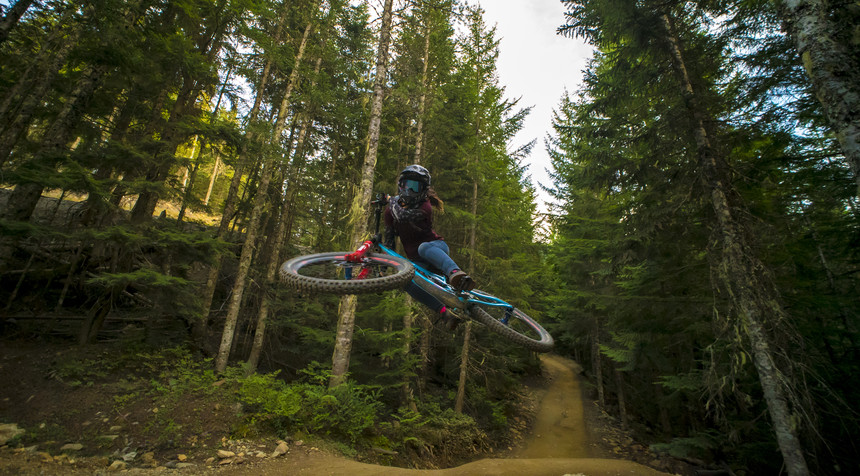 “My daughter is already bragging she’ll be better than mom,” Ryan says. “It’s amazing. It’s made my [2-year-old] son wants to ride his bike more since he’s always watching mom.”

One particular dream she had was getting inverted. It was actually her goal to do it by the time she was 30, but having kids changed that timeline. Ryan was on board, and they scooped up an airbag from California. At this point, they had relocated to Utah to chase warmer temps and desert riding. With the airbag in her backyard, Kaylee would spend hours honing her backflip as the sun dipped into the horizon. Practice varied from successful landings to a few nasty crashes—one of which seriously sprained her ankle. In fact, some of her worst injuries have come from sessioning on the bag.

“My daughter is already bragging she’ll be better than mom,” Ryan says.

After countless hours of practice, Kaylee and Ryan packed their things for Virgin, Utah to attempt the trick at none other than the old Red Bull Rampage site. She had her sights set on a big step that was 27 feet from the take off to the landing. It only took her three attempts to land her first ever backflip on two wheels. “I had nothing to lose,” she says reflecting on her transition to full-time riding. “I would’ve had something to lose had I not tried—there would have always been those what-ifs.”

It’s been months since Kaylee and I connected in Whistler, and with the 2019 bike season quickly approaching she’s got her hands full. As we catch up on the phone she can’t help but exhale a deep sigh. It’s spring break for the little ones, meaning that Kaylee’s extra busy with the kids at home. They’re at a climbing gym where she hopes they can expend some of their energy.

“People with young kids can still mountain bike, it’s just a matter of how bad you want it.”

“There’s a lot of pressure when it comes to photoshoots, timing, babysitting—it’s a lot.” Still, despite all the juggling, it takes to manage her family alongside Ryan, she thinks it’s worth it. “I feel that we as adults take on too much pressure and we don’t do the things we love anymore—which makes us miserable.” That’s not a lesson she wants to teach her kids- instead, they’re following along with her journey. Currently, that journey includes renovating an RV for the family to live out of full time so they can situate themselves next to a bike park and ride as much as they want.

“It’s nothing special for them—because they’re young,” Kaylee explains with a chuckle. Her six-year-old doesn’t realize that there are only a handful of women out there who can backflip their bike, and that’s okay with Kaylee. She wants the idea of other women riding to not feel like such an oddity—especially if they’re also a mother. If anything it’s only inspired her kids. Alora is starting to get jealous and has even mentioned learning a backflip herself.

“It’s what we create that’s our normal,” she says. She’s learned that it’s easy to make excuses, but doors are never completely closed. “People with young kids can still mountain bike, it’s just a matter of how bad you want it.” Her advice: start small...and bring your kids along.

Huckleberries are a necessary addition to any mountain bike ride. Katie Lozancich Photo.