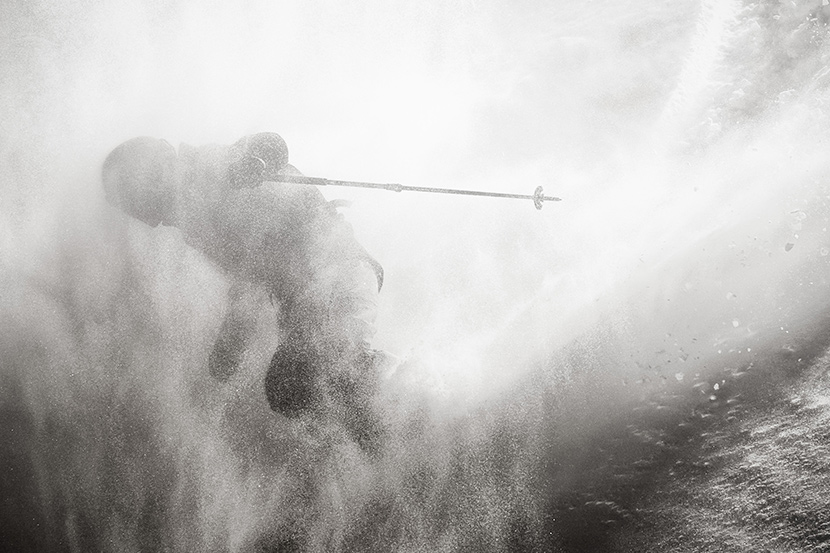 New snow almost always puts skiers on high alert. Sticking to gentle, low angle slopes after a significant storm is common practice in the backcountry, but it's easy to get lulled into a false sense of security come springtime—especially in a continental snowpack.

Warm temperatures increase moisture in an otherwise extremely dry snowpack, and snow crystals bond together in a process called sintering, strengthening and consolidating the snowpack. Steep, threatening couloirs that taunt skiers all winter start to become more friendly once spring rolls around. But that doesn't mean it's always good to go.

Last May, Griffin Post and two partners set out to ski the Ford-Stettner couloir on the Grand Teton, an iconic North American classic that's lured plenty of mountaineers onto its flanks. A late spring storm cycle had dumped over two feet of snow up high a few days prior, with rain down low and high temperatures in the valley. "We definitely didn't want to go out right away," Post recalls, "but we knew if we gave it a bit of time in the heat the snow would settle, and we'd basically be skiing corn top to bottom."

After waiting about a day and half, the crew headed up to harvest what they hoped would be 5,000 feet of smooth springtime corn. The Ford-Stettner descent connects the Ford, Chevy, and Stettner Couloirs down to the Teepee Glacier, a steep southeast-facing linkup. It's a beauty of a line but it's no walk in the park—successfully sending this route involves ice climbing, high-consequence jump turns, and up to five rappels depending on the time of year. 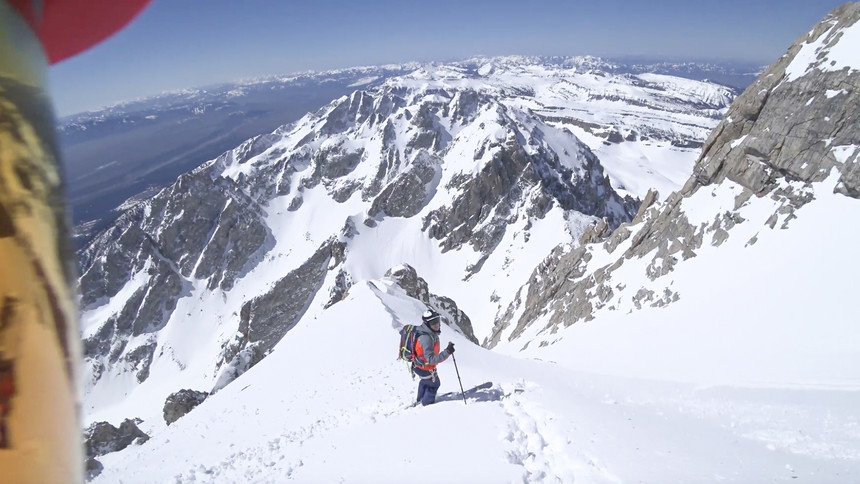 Warm spring temps were forecasted in the alpine, but the three agreed that if they started early enough and got off the mountain quickly, they'd be ahead of it. Two of the three skiers had already skied the line a handful of times and were confident they could ascend relatively quickly. At 12:30 a.m. Post and his two partners left the trailhead with the silhouette of the dark, craggly peak looming above.

After a few hours of solid progress, they started to notice that the snowpack wasn’t reacting the way they'd expected. "At about 10,000 feet it became pretty apparent that the snow had only seen a little heat. There was a bit of a crust, but under the crust was still up to two feet of really light powder" he remembers. It began to dawn on them that they had a much shorter window than they had expected.

"The hiking was pretty horrible" Post noted. The unconsolidated snow made for tough bootpacking, slowing them down about an hour behind their intended schedule. They carried on, aware that they needed to move quickly in order to avoid long exposure in the quickly approaching sun. Surface conditions were still relatively cold while they cruised up the last 1,000 feet to the summit, but they knew the solar aspects they were planning to ski would only get worse with time. 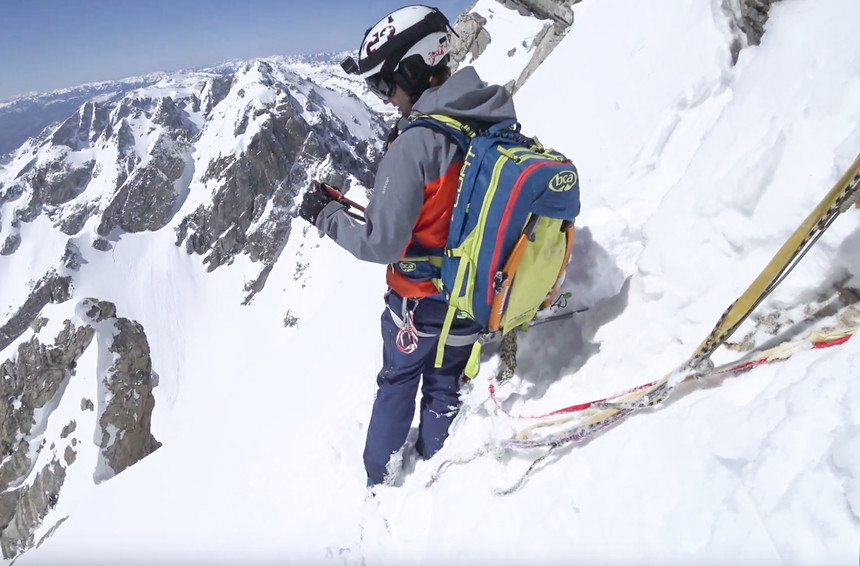 "We knew with the heat the mountain would start to shed, but we still thought we were a little ahead of it. All we had to do was move fast."

The trio transitioned quickly at the top at around 10:30 a.m. and dropped into the gut of the Ford, a steep no-fall zone that tips the scale at 50 degrees. It was immediately clear that the mountain planned to show no mercy. "After each turn we began to kick off these big, wet slides gaining more and more momentum as we went. It happened much quicker than any of us had expected."

While the three skiers picked their way down to the rappels, they ran into another party on their way up. They chatted for a bit and suggested that it may be too hot to continue to the summit. Despite obvious signs of the mountain beginning to shed the weight of its snowy blanket, the party decide to continue, confident in their abilities.

The two parties waved goodbye, and Post's crew began the rappels down. By this time is was clear that avalanche activity was in full swing. Sloughs were cascading all around them as they made their way down the five rappels that wound down the Chevy.

We were really lucky 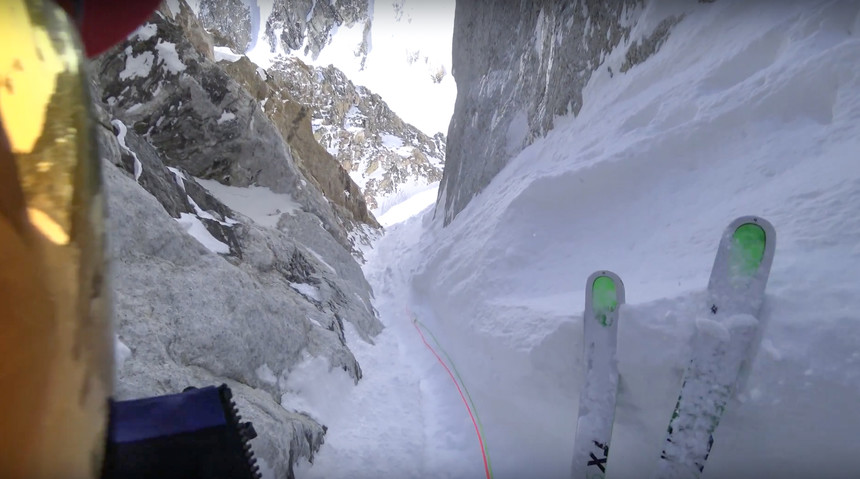 "I remember thinking we had to slow down at that point. It was kind of counterintuitive because we were trying to get off the mountain as quickly as possible, but in situations like that you can't panic. It's easy to make mistakes when you rush, and taking those extra moments to do everything carefully is more important."

After the last rappel they found a safe zone and hunkered down as the mountain poured down around them. "We were in this spot that was pretty blind so you couldn't see where they were coming from but you'd hear these freight train avalanches for like 15 seconds" Post vividly remembers, "then all the sudden they'd come cascading off one of the cliffs to the left of us."

They waited for about a half hour, silenced by the chorus of massive rivers of snow cascading down the slopes all around them. When the crashes began to subside they knew they had to act. With 5,000 feet of descending still to go the crew pushed off and skied out as fast as possible. As they hopped between safe zones Post remembers each turn kicking off big destructive chunks all the way down. Just before 1 p.m., over 12 hours later, they made it back to the trailhead, shaken but unhurt. 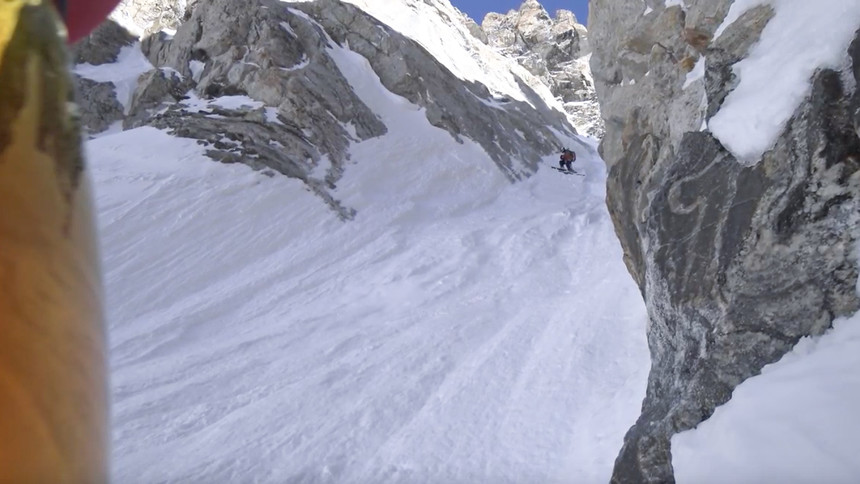 "We were really lucky" says Post, "we were definitely right on the cusp of something going really wrong—if we had been even a half hour later it would have been a totally different story." As it turns out, the skiers they had run into up high had topped out way too late, hung out for a bit trying to wait for the mountain to flush, but ended up rappelling the summer climbing route. They didn't get off the mountain until after 8 p.m. "I don't like to tell people how to do their business in the mountains" Post looks back, "but I'll admit that maybe we should have been a little more stern in that situation."

Reflecting on the day's events, Post admits that they didn't give themselves much of a backup plan. Confined almost exclusively to solar aspects, they had isolated themselves in the line of fire. The Ford-Stettner is a committing line without much of a bail out option, so in this case it wasn't possible to retreat to safer terrain.

Post's crew was lucky, but it's a sobering reminder that in the backcountry we are always at the mercy of the mountains.