The Far Out Ones: Clayton Vila

Possessing raw talent is pretty much a given for TGR’s roster, but few combine athletic ability with savant-like creativity quite like filmmaker Clayton Vila. The artistic mind behind the award-winning 2015 urban ski film, for lack of better, Vila is no stranger to making something from nothing, evading the cops and seeing lines where all others see a trip to the hospital. This year, the double-threat is back by popular demand — in front, and behind the lens — directing his old partner in crime, Sean Jordan, in Crested Butte, and throwing down some sends of his own amidst the urban decay of forgotten Russia. Recently, we caught up with Vila to learn more about his side passions, how he reconciles the glamour of social media with the inevitable grind of real life, and of course, all the gritty details behind his contributions to this year’s TGR film, Far Out, presented by REI.

You’re known for your work as a skier and filmmaker, but you also have a deeper passion for the ocean. Tell us a little about that.

Well, I grew up on an island and I was totally a beach boy. We were like SoCal kids, only on the East Coast. We lived by a beach and we’d walk around barefoot all summer and fall, surfing as much as we possibly could. That was my lifestyle growing up. I surfed before anything — that was my biggest action sport growing up, just due to proximity.

But yeah, I totally wanted to be a pro surfer growing up, but the waves weren’t good enough, and I wasn’t really good enough. But I knew I wanted to be a pro athlete, whether it was skateboarding, or surfing, or, I guess skiing? But at that point, I was only skiing for about a week per year. My parents were skiers, so that was the only sport that made sense to them and they could tell I really had potential, so they guided me in that direction. Once I was introduced into an environment where I could actually pursue my dream of becoming a professional action-sports athlete, I didn’t give a shit what it actually was.

You currently live in Los Angeles. Why was that the right place for you to settle and how does that interface with your lifestyle as a skier?

As I said, I grew up on a beach, that was my lifestyle … I need that in my life. Later on, I was uncomfortable being landlocked, so I made a change by relocating to Southern California. Now, I’m in a place where I have an awesome setup with my skiing.

It doesn’t really matter where I am. There’s a season to it and you go travel.

That’s why we have travel budgets, plus, I live near the airport — that’s just how I operate. It’s a balance that, for me, is very important. Obviously, the bonus is that I’m also a film director, and this is the place to do that. 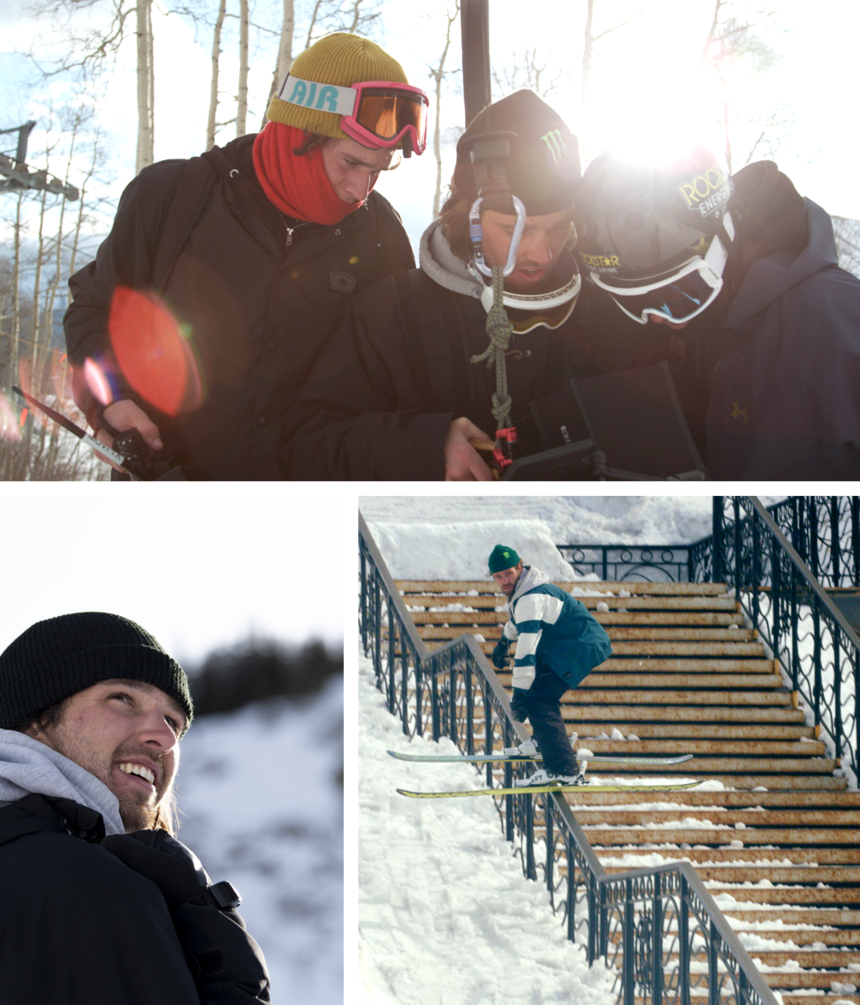 Were your parents doubtful about your desire to pursue action sports as a career?

My school growing up was so small that there was zero opportunity for pursuing any traditional sports. There was no way. We played soccer on a field with hills on it. And it got to the point where I was fucking MVP of everything — that was just my personality type. But what I actually enjoyed most was action sports. That’s what I wanted to do.

It got to the point where everyone in my town was like, “This kid is crazy.” So it wasn’t a tough sell. … But yeah, it’s kinda weird as shit, I became a pro skier on an island — I expect questions from time to time.

Do you ever plan to revisit the world of surfing as a filmmaker?

No, I left surfing as something that I did in my childhood, and that’s probably why I love it so much. Skiing is something that I got really competitive with, but it’s not what I grew up loving in my blood — I didn’t grow up in the mountains.

I grew up as an infant — it’s in my blood — to be in the ocean, and I think that that really does make a difference as far as the track of a pro athletes’ career.

There are guys like Tanner Hall, who, no matter what — even if he were to lose every one of his sponsors — he’ll continue to ski … that’s what he is.

I’m not saying that skiing is just a job to me, or something like that. It’s simply that I can’t live my life doing nothing but skiing because there’s just more to me — that’s not who I am. I left surfing as something that I’m not competitive with; I’m still always trying to get better, but it’s not something that I have any aspirations on a professional level with, and it’s important to me that I keep it that way.

What originally drove the pivot from ski competition to filmmaking? Was it an insurance policy for the future?

Yeah, people love pointing out that skiing and action sports are a young man’s game, but for me it was never about playing it safe.

I can’t stand when that’s the first thing that someone assumes, like: “Oh yeah, it’s great you’re [filmmaking], because you can’t ski forever.”

The truth is, I simply fell in love with filmmaking, and now it’s a part of my life. If I hadn’t found that, I wouldn’t be figuring out a plan B right now, I’d be doing what I love. I call myself a nonprofit — I do what I love to do, but that said, I’m a crazy person about it and I give it everything I have.

What is the genesis of your filmmaking? How did you fall in love with that craft?

It all started when I was making surf movies as a kid. That’s an interesting parallel: Having the pipe dream of being a pro surfer, just surfing my ass off. It was a small town, so there were only three of us in the water most of the time. I took it upon myself to make a surf movie out of it because I loved all the Volcom movies. I was doing it at the time because I wanted footage of me and my buddies surfing. It was cool and fun and we were pretending to be pros.

At the time, I thought it was all about surfing, but in hindsight, it turns out that was me making a movie — that was me directing. I didn’t even know what directing was and had no idea it could be a legitimate career path. Art class was painting, and everyone knew you weren’t going to make a living doing it. It literally never occurred to me that it was a craft worth building an identity around. 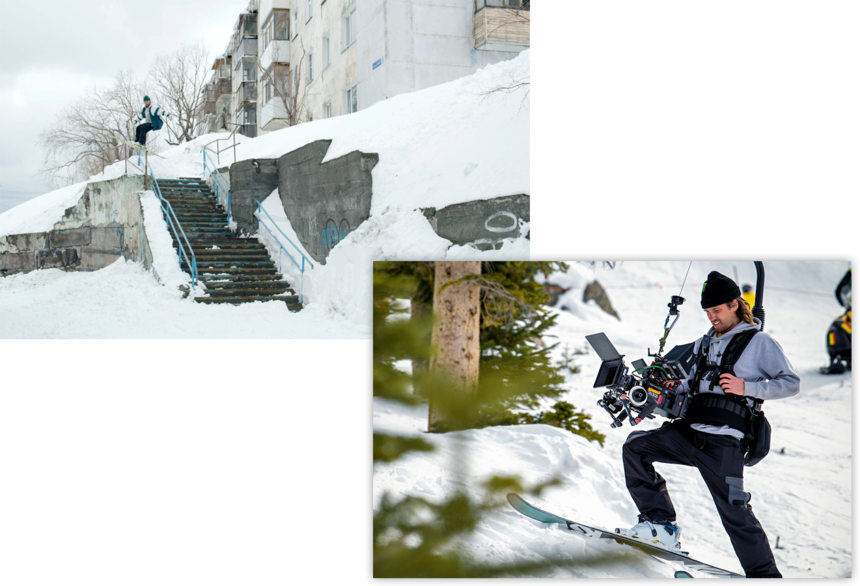 Vila is dedicated to the process behind his work, whether it be skiing or directing.

That’s what got me stoked on the whole process. And eventually, I started competing in skiing and I fell back into directing again. I was like, “Oh yeah, I know how to do this, I know how to spend a year gathering footage, making a segment and editing my own parts.”

But it was never a sales pitch. It just comes back to me giving a shit about what I do so much. I was never going to let some random jackass editor that I had never met screw my segment up. Some people might not notice, but I wouldn’t be able to sleep if someone edited my shit, just the sightly wrong pace, wrong song, wrong color grade — I care about all that stuff.

Tell us about the Crested Butte segment you filmed with Sean Jordan for Far Out.

There was no snow, so that put pressure on me a little bit. We went out and scouted it and the lack of snow obviously spooked us. But it became more about the creative element as opposed to the stunts we were trying to pull off. So yeah, we had fun with it — it’s the Wild West out there.

And luckily, the features worked out. Sean — bless his heart — he didn’t redefine jumping in the segment, but every cork 7 he did was death-defying, even though it doesn’t seem like it. Conditions were just crud, I mean … no snow. It was sketchy, for sure. That’s why we brought Sean in. I told Todd [Jones], “I’ve got this buddy who’s used to flying over concrete, and he’s as talented as anybody.”

We made the call. Sean came in. He crushed it.

Give us the debrief on your trip to Russia. What was that like?

Russia was insane! That place is crazy — it’s not like anything I imagined was happening on this planet, that’s for sure. Such a culture shock. It was a really fun trip, because it was so difficult. Even just eating meals was a struggle there because it’s so different. It’s like … the produce section at the grocery store has five rotting tomatoes and a banana.

No one spoke any english. It took 60 hours to get out there. It’s an irrational place to travel. But it was a blast. … We had good people on it — that was the saving grace of the whole thing. To be fair, it’s frightening when you’re in a place that’s that different; it’s not a third-world country, but it was a lot more like that than we expected. All the buildings were decaying and, yeah, it was nothing like what we expected.

Was the quality of the urban features different because of that decaying vibe?

Totally! It was like finding your dream world, but you wouldn’t actually want to live in it. We didn’t use a bungie, or a winch, or anything — not even once. Everything is natural. It might not sound that impressive to non-urban skiers, but that’s crazy and almost never happens. It was unbelievably perfect for our craft.

How do reconcile the glamour of filming a segment with the reality of being in a rough, challenging place, like Russia?

Let’s just say, it makes me post on social less, hahaha. But honestly, that goes so much deeper than the trip to Russia. You can never explain what someone’s life is really like.

Ultimately, being a professional street skier is nothing glorious — and that’s for damn sure, no matter where you are. But we don’t sit around complaining about it, because that would be ridiculous — it’s our decision. But like most things, it’s not what everyone thinks it is. They don’t realize how much hard work it is — how non-lavish it is.

Generally speaking, in urban skiing, we’re looking for the shittiest parts of cities we can find because that’s where we get away with all of it, and that’s where nobody cares.

But you can’t really portray the reality of what you’re doing with social media, so the best you can do is understand that everyone else’s social medias are just the most glorified versions of what they do. 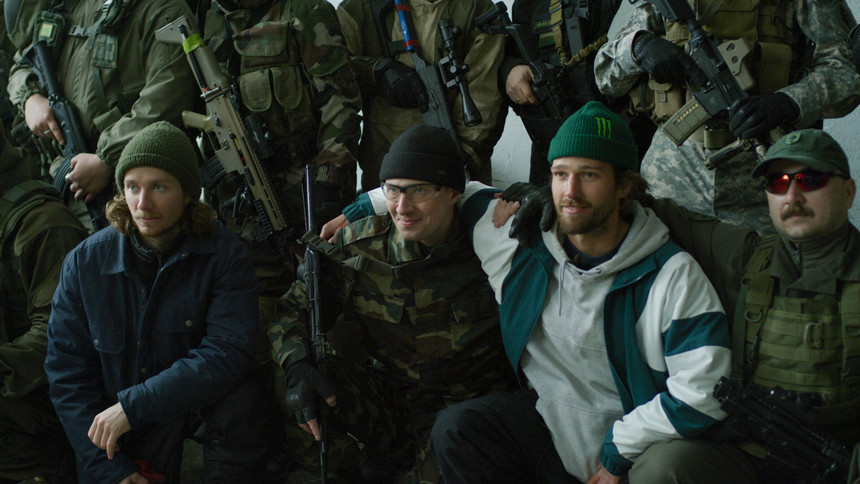 How did the Russian people receive your skiing?

They didn’t really give a shit. I don’t want to make it out like there were no redeeming qualities. The locals we worked with were amazing and we had a blast at the end of the day. It was one of those situations where you’re like, “Wow, this sucks so much that it’s fun!” We made the best of it.

When I first showed up I was like, “Oh my god, get me out of here,” but by the end you’re used to it. It was really difficult to execute, but everyone helped us, and by the end of it, it was really, really fun. Plus we got a lot of really good footage, and that’s why we were there, so it was a success!