The Far Out Ones: Fabian Lentsch

No two athletes in Far Out are the same, but Fabian Lentsch sure stands out from the crowd. He might be the new guy on the team, but the young Austrian sure shows he has what it takes to ski in the wildest places on the planet. Like so many of his friends, Lentsch started off on the competition circuit, but the free-thinking individual quickly decided to take a much more independent approach to his skiing. He quit the FWT and started roadtripping. Remember, this is Europe we’re talking about, and #vanlife hadn’t quite caught up to the levels we are used to seeing in North America, but Lentsch forged his own path ahead anyway. After spending nearly a year building out a custom-built RV, he packed it full of skis and friends, and headed East on a trip into the unknown. Over the next few seasons, what became known as the Snowmads crew ended up skiing some of the wildest places on the planet, but of course, Lentsch always wanted more. This year, he took some time off the road to film for Far Out, Presented by REI, joining Angel Collinson, Johnny Collinson, and Nick McNutt to explore the mountains of Albania. Check out his part in TGR’s upcoming ski and snowboard film, and hear what he has to say about pushing the limits in all corners of the globe.

Fabian, your rise in the international skiing world has been pretty incredible. Tell us some detail about your journey to becoming a pro skier. Where are you from, when did you fall in love with skiing, and what has it taken to get where you are today?


Like many other Austrians I started skiing when I was three years old and according to my parents stories I loved it from day one. Growing up in Innsbruck gave me an incredible surrounding for skiing. My dad took me powder skiing starting when I was 6, but I used to ski race too. At the age of 11, the racing routine started to challenge my freethinking personality so I decided to stop and wanted to become a big mountain skier. To be honest, I can’t really tell why I chose big mountain skiing. It might have been watching some of those old TGR movies. So soon after that, I managed to drop all the big cliffs in my favorite resort and always tried to go down lines as fast as possible. Freestyle skiing didn’t interest me at all, I was all about big lines and powder. A couple of years later a group of older guys who studied in Innsbruck took me skiing and I soon realised that I’m pretty good at freeriding, even compared to guys who are much older than me. So, when I was 15 years old I entered two competitions. One was a backcountry freestyle comp and the other a proper big mountain competition. The minimum age limit was 16, but I think that I annoyed the organizers so much that in the end they allowed me to compete if my dad joined. I won both competitions and this was the springboard for my career as a freeskier. 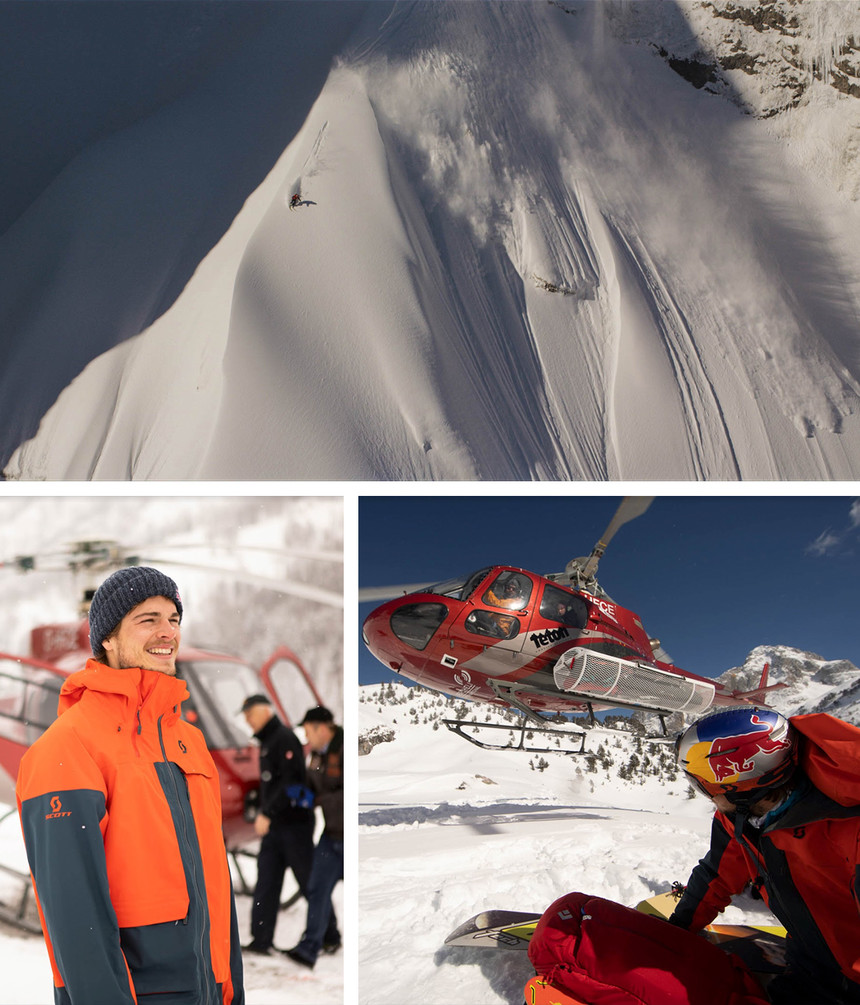 This season, Fabian Lentsch took a break from the roadtrip life to explore the wilds of Albania with TGR. Chris Bezamat photo bottom.

Tell us a little bit about the freeride community in Innsbruck. What does it mean for you to be a part of it, and what makes it so special? Maybe share a quick story about an epic day riding in the area.

The freeride community in Innsbruck is huge! In winter it’s all about shredding powder and I consider myself really lucky that I grew up here...

First of all, we can choose out of 80+ ski resorts within our season pass which is pretty epic. So once you figured out the weather science there are plenty of options to find lots of powder after a dump. Usually, I spend my days shredding in small and fairly unknown family resorts to avoid the crowds in some of the overrated places.

Who are some of your favorite people to ride with out there?

Around Innsbruck that would be Markus Ascher, Jochen Mesle, Neil Williman, Raphi Webhofer, Joi Hoffmann and many more. I also love to shred with Tom Leitner, my old mentor Roman Rohrmoser and Spanish ripper Aymar Navarro.

Usually I spend my days shredding in small and fairly unknown family resorts to avoid the crowds in some of the overrated places.

You are probably best known for your work on your Snowmads web series. What motivates you to travel to obscure places all over the world and look for skiing? Do you like skiing on the road better than at home?

Snowmads resulted out of a road trip from Austria to Kyrgyzstan in the Summer of 2013. We used a standard RV for this journey which barely made it back home since it wasn’t really off-road friendly. I loved the lifestyle of being on the road and exploring new places so I decided to build a proper expedition truck, which is able to get us anywhere no matter if it’s summer or winter. On the first Snowmads trip we drove four months through Turkey, Iran and Georgia, skied in amazing places but also got in close contact with locals. That’s what drives me the most, to combine great skiing with actual traveling. The Snowmads Truck is the ideal tool for that. Our philosophy is to fill up the truck with a bunch of adventurous and open-minded people and start exploring. Last year this brought us to Greece in winter where we stayed for two months. But home, man, skiing at home in between big journeys and knowing the terrain by heart, that’s amazing too!

Outside of skiing, what are your favorite things to get into? It seems like flying has become a new hobby? How did that get started, and where do you see it taking you?

I started flying or to be more exact speedflying about five years ago on this trip to Kyrgyzstan. A few months before our departure my friend Domi had a big smile on his face and told me: “Fabi, I just organized some speedgliders for our trip, it’s time to teach you how to fly!” Being able to fly lines in summer, similar to the speed and difficulties of skiing lines in winter, is just amazing. By now, I also love to use bigger cross-country wings to climb up in thermals and light miniwings to get down proper summits. So yeah flying definitely became a big hobby of mine but as of now, I don’t see it taking me anywhere specific. I just love doing it whenever I can and especially while traveling. I also love riding bikes, mountaineering, surfing and recently I started with freediving and spearfishing.

Being able to fly lines in summer, similar to the speed and difficulties of skiing lines in winter, is just amazing.

This year, you got involved with TGR. How did that happen? Being young and from another country, you are definitely our favorite wild card on the TGR roster!

Yeah, this was really surprising for me. During a meeting with my Scott athlete manager last summer he asked me if I would be interested in filming with TGR that winter. Of course, I told him that I’m interested but somehow I didn’t really think that it would happen. Suddenly in the beginning of January, my trip to Albania was confirmed and I also got sent down there to fly over a certain mountain range to take terrain pictures prior to our trip without knowing anyone from TGR. Apparently, they saw me skiing spinewalls in Georgia in our first Snowmads movie A Journey Towards Eastern Suns and figured that I would fit into the crew and that I could handle the recon flight. Once I met the crew it all turned out great and I really enjoyed spending time with them. 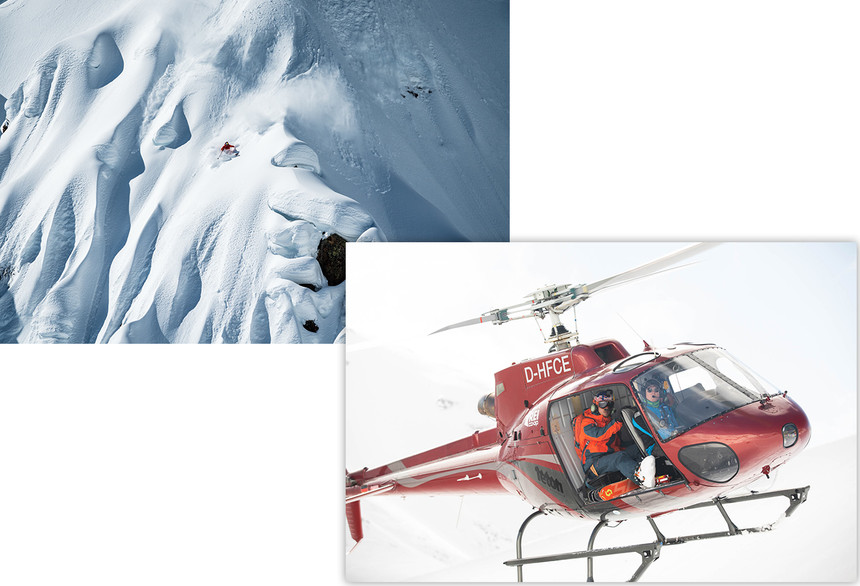 Whether it's blasting down big spine faces, or hanging out the side of a heli, Lentsch knows the ropes. Chris Bezamat photo bottom right.

What did you get into filming for Far Out? What were the highs and lows? Tell us the story of what it took to ski your favorite line for the film this year, and about the trip as a whole.

Albania was really challenging. Our helicopters arrived a bit later than expected and once they landed in the valley it got warm and it rained for over 10 days. The mountains were super wild and huge and had lots of rock faces. There were no straightforward AK lines with smooth outruns. We knew that from my pictures but actually standing on the bottom of some of those lines was pretty intimidating and the snow conditions were quite variable. So it took us a while to get into the right mindset and scored some really sick skiing in the last three days with great snow. On a snapshot out of the helicopter I discovered a gnarly line with a challenging outrun and decided to go for it. It turned out that the sun was just in there for 45 minutes each day which explained the incredible snow conditions. That line took lots of commitment and a can-do attitude. Check it out in the film! 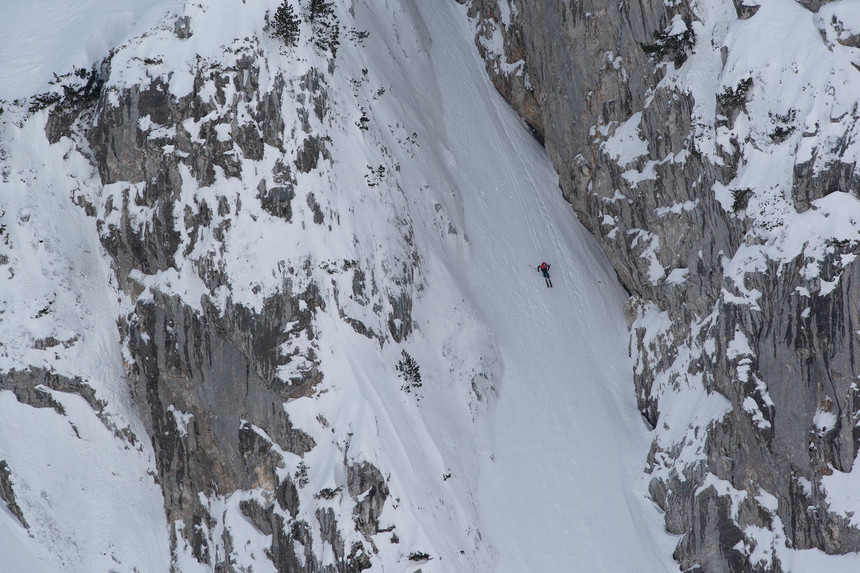 How would you describe your particular style of skiing?

That one is pretty simple! I love to ski huge lines, go as fast as possible and drop big cliffs. I think you guys would call it big mountain skiing! In reality, I enjoy ski mountaineering just as much as using uphill transport.

So, what's next for you?

Long term, I’m working towards a really big road-trip around the world which will take several years with the Snowmads truck. That journey won’t start before 2021 though. Before that I’ll spend about a year in Iran for a movie project and this coming season I decided to ski at home for most of the winter but also hope to be involved in some more trips with TGR. 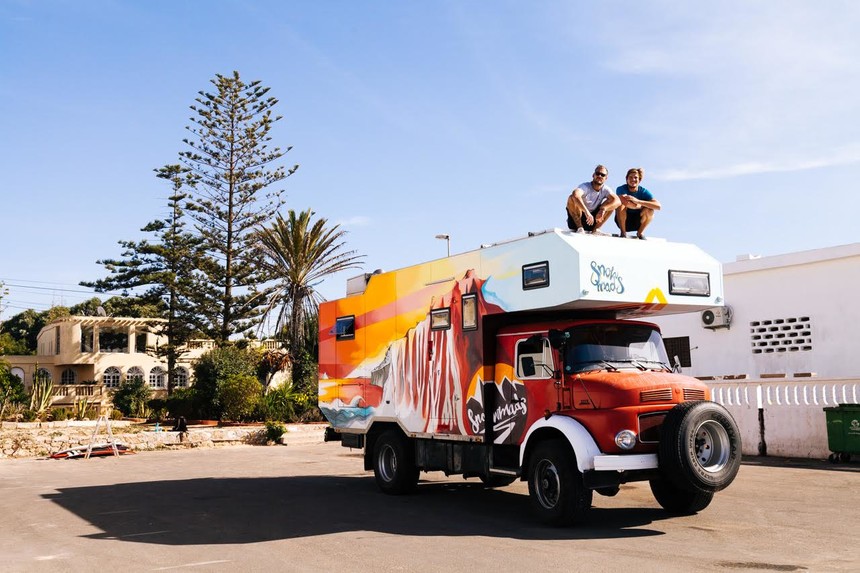