The Far Out Ones: Robin Van Gyn

Over the past decade, Robin Van Gyn has been one of the world's most influential snowboarders. From countless video parts and contest results, she is always looking towards the horizon for new progression and innovation. She has released a stacked segment in the all-female snowboard film Full Moon, filmed with Standard Films, Peep Show, Runway, and earned multiple Video Part of the Year Awards. Simply put, Robin is a badass whose work ethic has turned her into a force to be reckoned with. This year she linked up with TGR for their new film Far Out presented by REI. We caught up with her to hear about her year and learn more about a winter on the road.

It was awesome. It was nice to work with a new crew this winter and meet new people. It’s a new thing for me to work with skiers, but it’s really interesting because of the different perspectives they bring to the mountains. We work in different ways and it allows us to get creative on how we move. It was really refreshing. Everyone on the production side is a super pro and I really appreciate that a lot. It was kind of a step up from some of the things I’ve done in the past. I’ve worked with a couple of super pro crews in the past so it’s really nice to have that again.

RELATED STORY: TGR Sits Down with Robin Van Gyn to Discuss the Future of Snowboarding

Elyse Saugstad and I talked about it. For her, she looks at the terrain and says I want to ride the alpine and hit cliffs. I want to do that, but I’m also looking for more of the freestyle element. I’m always looking for a pillow popper or something like that. I think for me watching her go down the mountain, it’s so gnarly how she gravitates towards the alpine. It’s different from how I ride so it’s really interesting to have that perspective. I would push her to build a little backflip jump or hit a pillow. I would encourage her to do that and she tried her first backflip on film on that Slovenia trip. That was a product of us looking at each for creativity and inspiration. 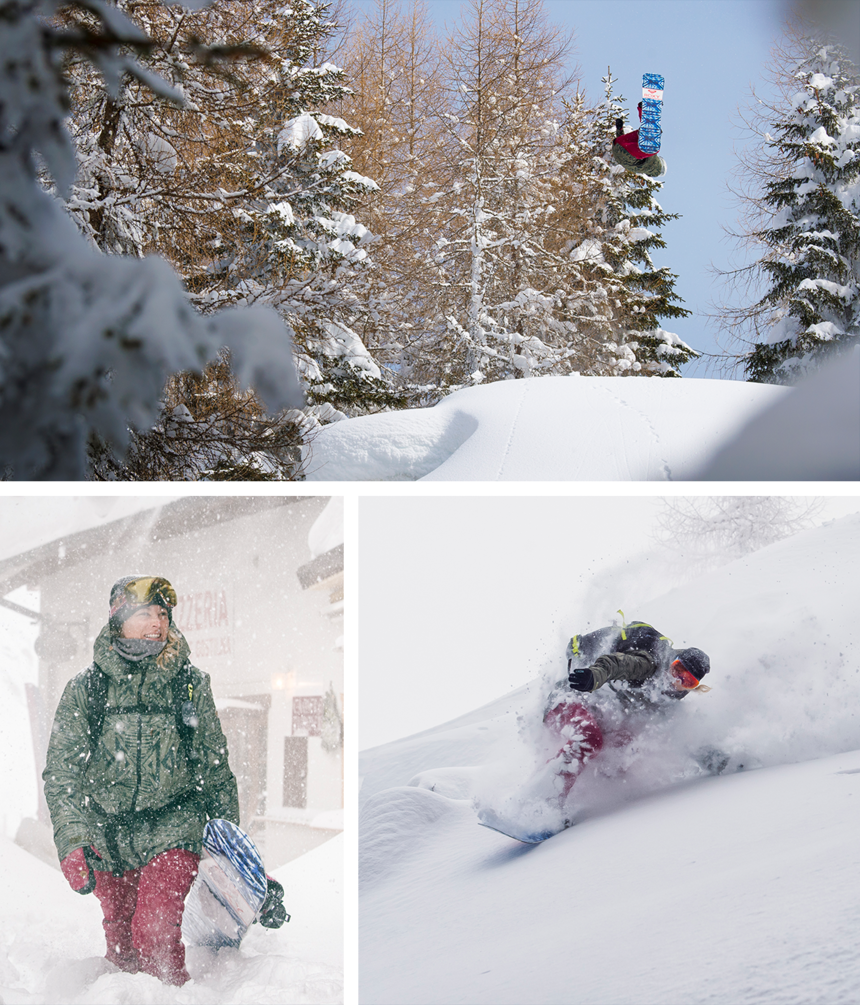 Robin's first trip with TGR was to Slovenia with skiers Griffin Post and Elyse Saugstad.

What was it like shooting in the Crazy Mountains in Montana?

Going into that trip it was really secretive. I had no idea where we were going. I was stopping at gas stations in Montana and they have these maps on the walls. I would ask the person working where is the Crazy Mountains? They had no idea what I was talking about. Nobody seemed to know where we were going. It was pretty crazy because it was just an island of mountains in of the middle of nowhere. You just kind of drove up on it and there it was.

What were your expectations going into that trip?

I knew I had a lot to learn on that trip. I knew that I would be riding and hiking in terrain that I wasn’t familiar with. I had never really winter camped for more than two nights, so I was pretty nervous. I was thinking I hope I have everything. I don’t want to be cold. I don’t want to bring too much. There is a fine line between being over-prepared and having the right amount of equipment. It was definitely a new experience for me.

I would ask the person working where are the Crazy Mountains? They had no idea what I was talking about.

The winter camping ending up being pretty easy. I’ve camped quite a bit in other seasons. It was just a couple more layers of clothing and being conscious about keeping things dry and drying out.

Have you worked with Mark Carter or Jeremy Jones before?

I had never worked with either of them. I had met Mark so I knew it was going to be awesome because the guy is non-stop comedy. I had never really met Jeremy before but knew him from his Deeper, Further, Higher trilogy. My impression of Jeremy was that the kind of terrain he rides is so beyond what is normal for me. His level of risk tolerance is much different than mine.

In the first day or two was pretty relaxing. We didn’t have a lot of snow. We woke up on the third day and it was absolute Snowmageddon. The kitchen, everything, was buried. From that moment on, we realized that we needed to make a hangout zone and a kitchen. We ended up building this wall around a tree so it was a fully enclosed half igloo where we could cook and hang. 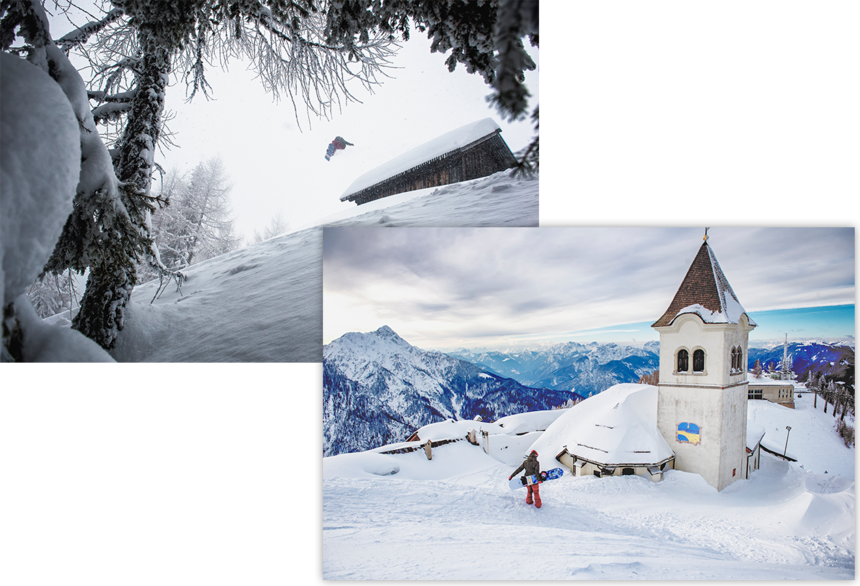 The terrain is really different. It’s stuff that I’m not used to. I’m usually snowboarding in British Columbia where there's a super thick snowpack. This was much rockier and more continental then I’m used too but with that, you get a lot more access to the top of the mountains. What I’m used to is finding a face and seeing how I can get on it. This was summiting the entire mountain and riding down the most prominent face. It was just very different for me, bit more gnarly getting onto stuff.

I’ve never used crampons before and I found out there that there are two types of crampons and of course I had the wrong ones. When somebody says crampons on the gear list I thought, “I have those for my splitboard.” I didn’t know there were boot crampons. I actually ended up using cinematographer’s Nick Kalisz’s crampons the whole time.

Had any other trips prepared you for this type of riding?

I spent a long time in Argentina and it’s actually really similar terrain. Earlier in my career, I did a lot more chute riding and hiking. The snow isn’t super fat down there, so you are riding on a combination of snow and rock with cliffs. Argentina is quite similar and in some cases can be even shallower. 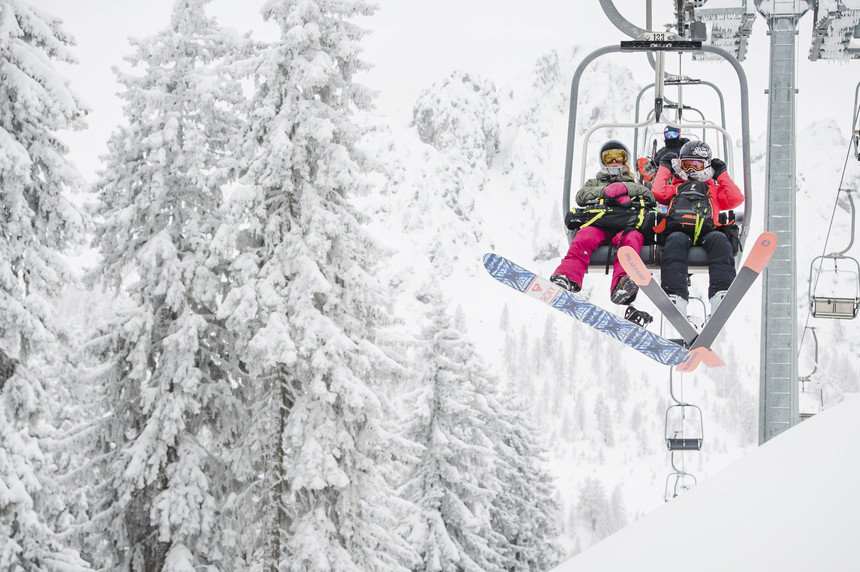 What was the highlight of the trip to the Crazies?

There was one face that we called Vision Quest. It was something that we had actually been out to once before but never got to ride because we lost light. It was a big mountain peak, that took us quite a while to get to the top. We had to traverse on the way out there and in total it was probably a 5-6 hour mission.

Do you have a different mindset when you are hiking these big lines?

It’s a real examination of the terrain. It’s more like you are with the mountain than you are on it.

It’s great and really cool because you go out there and get to take your time with it. You look at it from afar, you get closer, hike up the face of it, you get to feel the snow and the heat, experience how everything is changing. You get to the top and you are pretty much dialed because you have had so much time to look and study the face. You are with the mountain quite a bit longer before you ride down it. I don’t know exactly how to explain that but it’s a little bit more of a deeper connection. It’s not just getting dropped off by a heli, then ride down, and get picked up. It’s a real examination of the terrain. It’s more like you are with the mountain than you are on it. 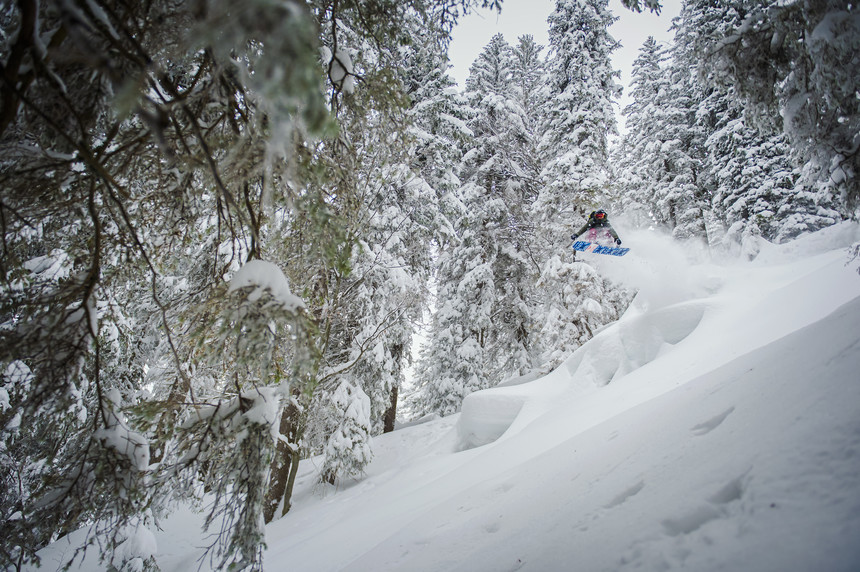 What surprised you about the experience?

I didn’t expect everyone to work together so well. We had quite a few people, a ten-person crew. Everybody did there part and it was a really well-oiled machine. When Jeremy had objectives that I wasn’t okay with or Mark wasn’t okay with, we stood down. Having a crew that was able to trust their own instincts was really incredible. The clear decision making throughout the entire crew, and having them trust their intuition, I loved that.

I saw you were posting journal entries from this trip. Do you always keep a journal?

I’m pretty much always writing on trips. I don’t keep a journal the entire time, I just write quick notes. On this trip particularly there were no distractions and I was really diligent about it. I think one of the days I wrote about my limits being tested and knowing where the limit for you lies. You find your own level of gnar. It’s a cool thing to realize. It’s good to know where you stand and limits for exposure and risk and know that it’s not the same for everybody else. Jeremy has a different level of risk tolerance than I do. I’m not there yet because he has much more experience in the mountains than I do. It was an interesting day for me to write because it was more of a reflection of a general feeling.