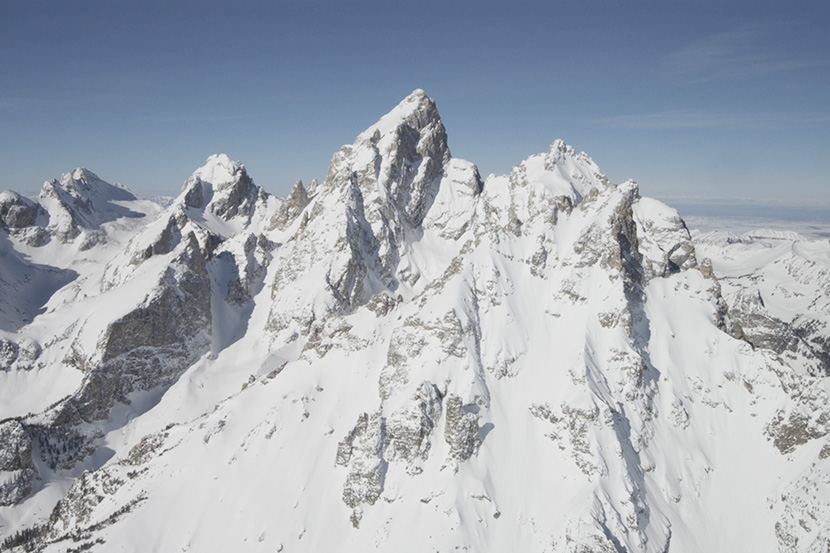 Rapid heating can be one of the most unpredictable and dangerous weather phenomena in the mountains. While easy to spot, once detected, it’s already too late. It is common in spring snowpacks when the snow gets blasted by the sun.

In April 2011, snowboarders Jeremy Jones and Xavier De Le Rue and skier Jimmy Chin were involved in an avalanche accident in the Tetons directly caused by rapidly rising temperatures that nearly claimed their lives. It was not only the stuff of nightmares, but the trio admits it could have been easily avoided by paying attention to several clues the mountain threw at them.

That morning, Jones, Chin and De Le Rue headed up into Wyoming’s Grand Teton National Park to ride a line for a film project. The narrow couloir dubbed the Sliver, lies high atop Nez Perce peak, slicing a perfect line through the sky just below the Grand Teton.

Jones recalls the decision making process that day: “We had been really focused on this steep chute that we were going to ride, talking a lot about the top of the chute being wind-loaded and there being some storm snow issues. Before I get into the mountains every day I like to try and think about what is going to potentially turn me around. So I'm very comfortable going, ‘Alright man, this is sketchy for me,’ which actually happens a lot.”

The crew successfully climbed and ridden the couloir that morning, encountering stellar snow conditions and checking off the shots they needed for the film. There were no obvious avalanche issues on the Sliver, and the Teton snowpack had been setting up nicely for several weeks. The crew was in full production mode, and after riding the line, it was nothing but high fives all around. 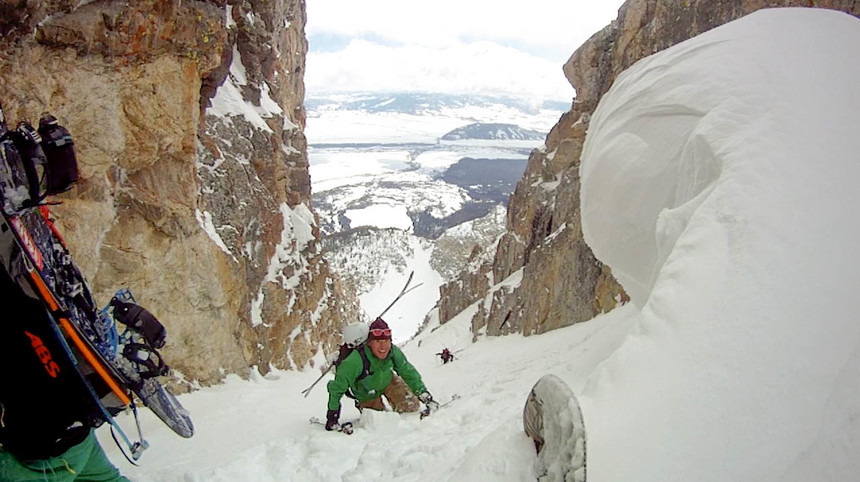 At this point, Jones recalls standing on the saddle between Nez Perce and its neighboring mountain Shadow Peak, re-assessing the conditions. The day had started off cold and clear, but he started to notice little slabs breaking off and Cinnabon-style pinwheels starting to roll down the snow surface on steep slopes as the temperatures soared. While waiting for the camera crew to finish shooting an interview with Chin, Jones hiked up a mini-line at the bottom of the Nez Perce, ultimately backing off because it seemed too unstable to ride.

Reconnecting with the rest of the crew, Jones voiced his concerns on the snowpack and the temperature, indicating that he thought they should ride back down their skin track on a northeast facing slope that was shaded and in the trees. Chin and De Le Rue wanted to split off from the production crew and finish their day riding a second steep couloir that split the south face of Shadow Peak. The line runs 2000 feet at a consistent 40 degrees, often dubbed the Four-Hour Couloir. They recognized the danger that the temperature rise presented, but felt that the line was easily manageable with some ski cuts and carefully selected islands of safety. 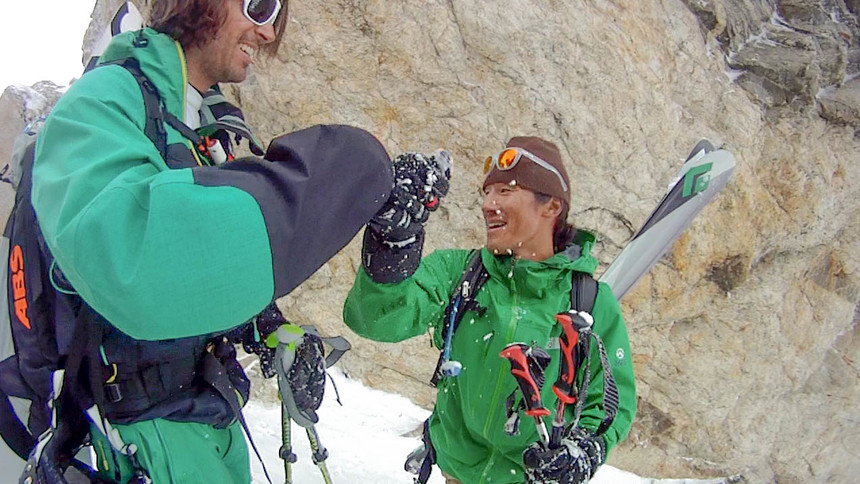 Jones vividly remembers their reasoning: “So Jimmy and Xav are kind of like: it's so simple right now. You just cut it, flush it, cut it, flush it. Just make sure no one's in the gut, one at a time and the three of us can safely pick our way down that.” He did not put up a fight with their decision making, instead giving in and trusting that they could make it work as a team of some of the most experienced riders in the world.

The three riders stood atop their line, and De Le Rue dropped in first. He made several turns before pulling into an island of safety. Jones dropped second and rode further down the chute. Pulling off below De Le Rue, he watched the snow move lethargically down the line, rollerballing and pinwheeling as expected. It was not avalanching, but felt heavy and uncomfortable to ride.

Chin dropped last, riding a few feet rider’s right of Jones’ tracks and broke off a tiny slab on top of a convex roll. Jones remembers the slab being very small, but since the hot snow was incredibly thick and gooey it soon propagated into something much larger and more dangerous: “In a normal winter snow scenario it wouldn’t be a dramatic thing, it was really just a tiny pocket. I've never seen a scenario where a slab formed when it's that hot. So Jimmy fights like hell to get out of this thing, towards where I’m standing, but in doing so he gets sent into the gut. There's no place for him to go, really. At that point I knew he's going for a ride.”

Watching Chin caught in the ever-growing avalanche, Jones realized there was nothing he could do. Concerned about his own safety while riding, he had chosen to stop in an island of safety atop a defined prow overlooking the line, keeping him out of harms way. The mass of snow kept growing larger and larger as it accelerated down the gut of the chute, with Chin trapped right in the middle.

this is fucking bad 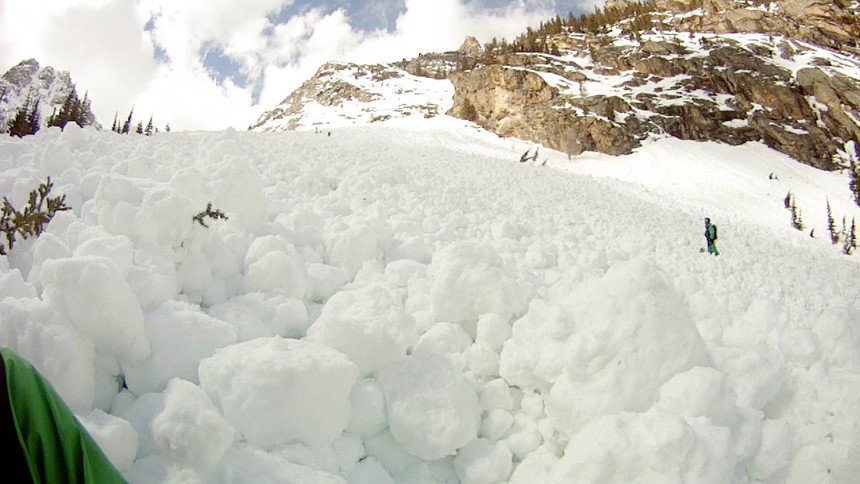 Jones immediately knew he had to keep an eye on his partner, but Chin was dropping out of sight at an alarming rate. He yelled “avalanche” to De Le Rue, still higher on the line, and dropped in to follow the slide. “I switched to receive right away, and I started moving down this thing really fast, basically falling down the chute, transceiver in hand, thinking ‘this is fucking bad, does he have an airbag?’”

Riding up to the section he last saw Chin, Jones got a faint beacon signal, but it seemed to be coming from the plethora of electronics he was carrying on his person. At this point, De le Rue had made down to the same spot and Jones told him to keep going down, as he was going to double-check the pocket to make sure Chin was not buried deep beneath it.

Watching De le Rue ride down, Jones recalls: “Xavier is truly the fastest snowboarder in the world, he's absolutely mobbing down the gnarly avalanche debris towards the bottom, beacon in hand.” After about 30 seconds of zig-zagging across the slope, Jones decided that Chin was not in the pocket and followed his friend down. The snow had stopped moving and started to settle into the heaviest, thickest, concrete-like slab any of them had ever seen, enough to physically crush a human body.

The chute bends near the bottom, so De le Rue and the toe of the avalanche debris were out of Jones’s sight. There was still no sign of Chin.

Coming around the bend, Jones saw De Le Rue at the toe of the debris next to Chin, alive and well, but extremely rattled and missing a ski.

Jimmy Chin had just survived a 2000-foot slide in one of the most violent avalanches any of them had ever seen, miraculously ending up on top with no injuries. He was not wearing an airbag, but credits sheer luck and his strength training for an upcoming Himalayan expedition with his survival and ability to fight and swim his way to the top of the moving snow. 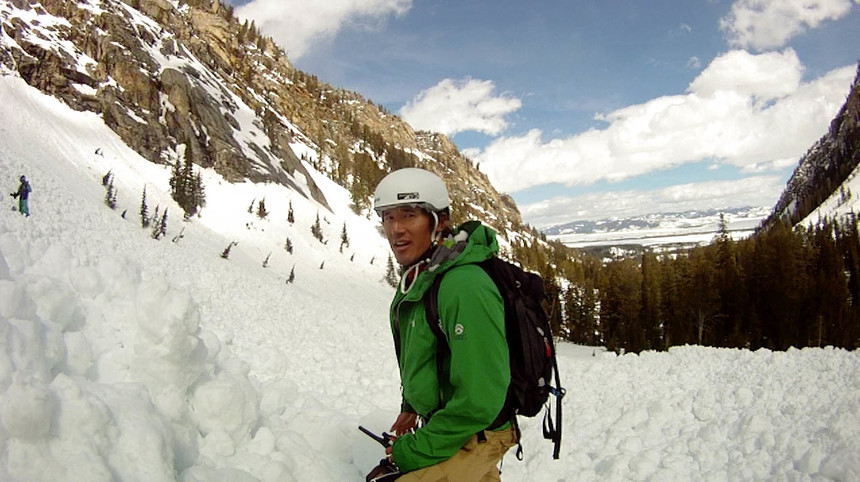 “I think 99 percent of people in the world are probably snapped in half at that point, losing consciousness and not fighting their way to the top, but Jimmy just climbed himself out of that thing,” recalls Jones, “I look at these situations and say, I take a ride in the Himalaya and survive it 100 out 100 times, maybe with some injuries. I look at Jimmy’s slide and say he takes that ride 1000 times and survives once. The average person takes it 1000 times and never survives.”

After an emotional debrief at the bottom of the line, all three riders made it home safely, picking their way through some incredibly hot snow to the parking lot.

What could they have done differently? The crew admit to taking the obvious red flag of heating into stride much too easily. Incorrectly believing that they could manage the sleeping avalanche dragon on a relatively high-consequence line is what got them into trouble. To Jones, his experience has taught him two things: Trust your intuition when you see the mountain’s warnings, and don’t try to outsmart the avalanche scenario. You may get lucky once, but the mountain is always more powerful.