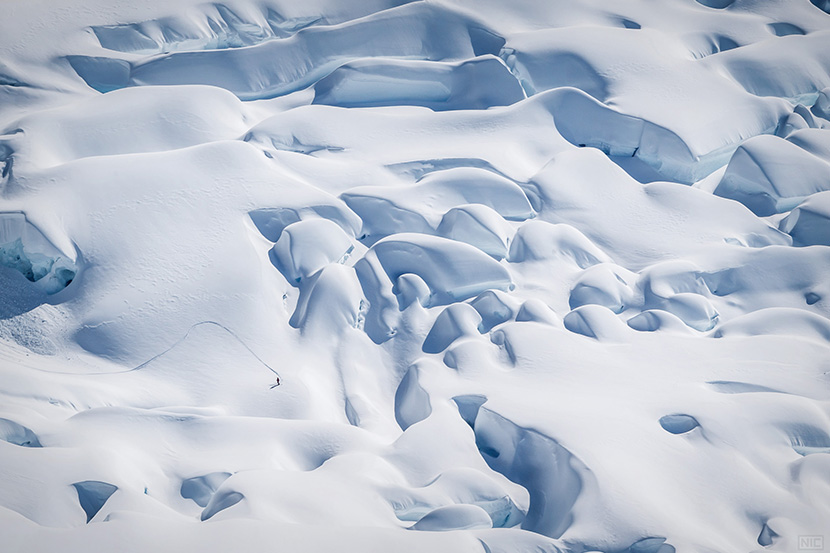 The wind is a powerful force in the mountains, and transports snow to form dangerous wind slabs on leeward slopes. These are easily triggered and can take you for a ride.

Last winter, Ian McIntosh, Griffin Post and Dane Tudor–along with a TGR production team–were part of an avalanche incident while camping in a remote part of the Coastal Range in British Columbia. The goal of the trip was to hike and ride zones that rarely see skiers of this caliber (or anyone else, for that matter). Two integral parts of the team and this story are guide Zahan Billimoria and cinematographer Ben Dann. Zahan is TGR's go-to guide and has been leading our athletes safely through some of the world's most challenging terrain for years. Ben Dann is a talented ski cinematographer who was raised in the shadow of the Tetons and has devoted himself to capturing life in the mountains.

Late in the trip, stormy weather and gray skies inhibited the group’s ability to realize the full potential of the shoot. With a weather window on the horizon, Zahan realized that it was time to focus the team on a single objective: Mt. Sampson. Sampson, a large peak, would require perfect teamwork in order to complete the mission and ski it safely. To get a better idea of what they were expecting, the team decided to spend a day scouting the lower part of the mountain–no member of the group could have predicted that this day would become one of the most memorable of the season. Zahan breaks down the morning of that fateful day below.

“This was a recon mission day and we had heavy cloud cover, which had become pretty standard for our first ten days in camp. We have this one day to go scout the line–I don't think we left camp until about 10 am because of the weather. What we thought we would do is climb to a ridge then traverse to get a better idea of the snow.”

Once the team started ascending the ridge, Zahan made note of an updraft wind coming from the valley floor. “What we noticed as soon as we started moving up was that there was a very strong southerly valley bottom wind. It was loading things in a cross-loading way.”

During the previous 48-hour period, it had stormed consistently at camp and the whole team had observed graupel accumulating around them. Graupel is a type of snow formed when supercooled water droplets collect on falling snowflakes, creating round balls about 2-5mm in diameter that essentially look like white ball bearings. When Zahan saw the graupel, he made the following observation: “One of the particulars about the distribution of graupel–because it's a little ball type of feature–is that it tends to roll. It often accumulates, not on the high peaks, but will roll down to where the angle lessens sufficiently to where it can settle.”

straight lining was my only way out 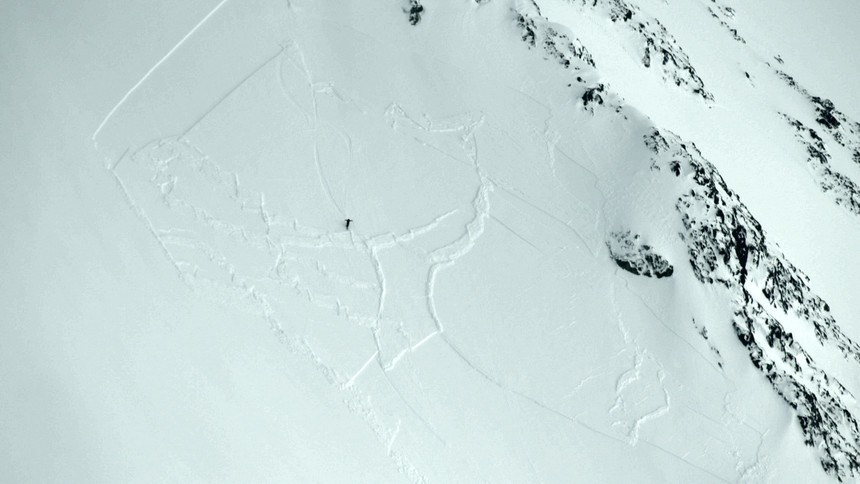 Fast-forward to the recon mission: the team observed that Zahan’s instinct was correct and there was a large accumulation of graupel at the base of the ridge that they wanted to hike.

“We were digging a pit and had a brief conversation. We found that the graupel was reactive on this newly deposited, cross-loading wind slide. The propagation was alarming, but it was a fairly easy problem to manage by just walking on the windward side of the ridge. There were these very defined rock ribs, so you could just step beyond the right side.”

This is where a guide of Zahan’s caliber admitted to his first small oversight of the day:

“What I should have done then, and didn't do, was really make a notable mental note of that problem for later, because we had to come back down the same way. We proceeded to the top of the line to ski down, and by the time we got to the top, clouds had rolled in. We acknowledged and talked about the graupel down low. As we got up to the upper two-thirds of the mountain, we were digging pits and nothing was reacting, so we felt good about it as we skied. By the time you're down in that bottom third of the mountain, your brain tells you to just keep going.”

This is where we hand the storytelling over to Ben Dann. Ben’s job as a ski cinematographer requires moving efficiently through the mountains while capturing every moment for our enjoyment at home. One could argue that this job is more difficult and complex than any other on the shoot. To be successful, it requires an artistic eye, mountain sense, and solid ski skills.

Fortunately, Ben excels at all three. Like Zahan and the rest of the team, Ben had observed the reactive graupel layer, but it wasn’t at the front of his mind. “This was my opportunity to shoot the hike part of Sampson. We were focused so much on the ascent and planning for the next day that this descent was the least of our worries.” 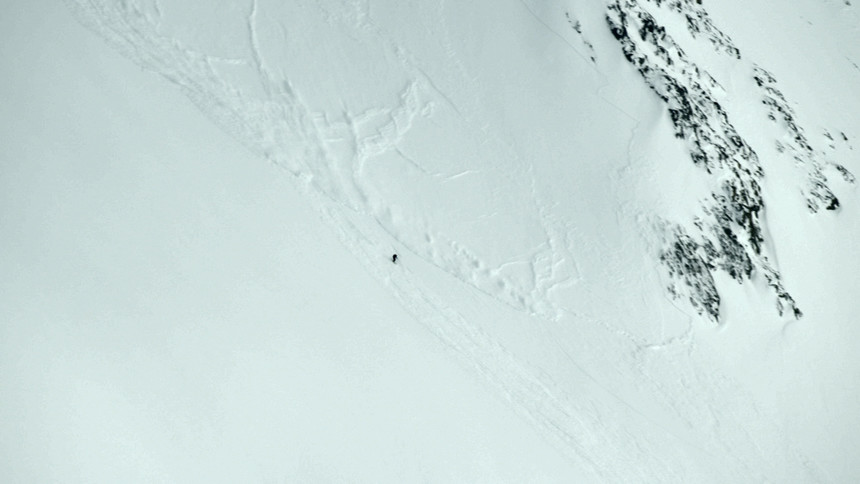 With the recon complete, Zahan let the group–Ben, Dane and Ian–ski down the line. The group quickly leapfrogged the top part of the route, skiing small chutes into a little bench, which opened up into a large snowfield about three-quarters down the run. “Dane went first and we heard him call avalanche over the radio. From where I was standing, all I could see was the toe of the debris pile and it looked tiny. It looked like a tiny slough; it didn’t register as a big deal to me, especially because Mac dropped right after me to the same line. Mac had no problems, so I figured it was okay.”

This is where the group being spread out on a couple pitches of mountains heavily impacted their decision-making process. Ben’s assumptions of the safety of the pitch proved to be incorrect; the wind slab formed by the valley updraft propagated on the weak graupel layer. “I dropped in and made a few turns and right over the crest was where it popped. Looking back on it now, Dane had just taken the foot out from the avalanche. It was a hangfire situation and there was a lot–probably a couple hundred of feet–of hang fire.”

From here Ben, had to make a quick decision as the slab propagated on either side of him. “I made another turn on the slab and it shot out so far from me that I knew there was no way to make it out to the side, but I could see the bottom of the break. I figured straight lining was my only way out. I have never been on a slide before, so I had never seen the snow bind up. It created these rollers that I had to tuck up and go over. It was like taking compression when you’re going over a roller on race skis. I was going super fast and wanted to make it back over to the left, but in order to get there, I had to go over Dane’s debris, which wasn’t soft at all. Once I got out in front of it, the avalanche did creep up to me, which I saw–and it scared me, because if it hit my tails, it would have taken me out. The crown wasn’t that deep–less than a foot–so it wouldn’t have buried me, but I probably would have been pretty beat up if I had fallen going that fast with my heavy camera pack on.”

It was a close call exacerbated by the fact the Ben was skiing with a heavy pack with his full camera kit, small drone, batteries and lenses in addition to all of his touring and mountaineering equipment. The group was lucky that it wasn’t a more serious incident, and it became a valuable learning experience for the rest of the trip and for the team’s future missions.

At the end of the day, the lack of communication solidified the importance of having stronger systems in place when the team went out to complete the Sampson mission. A couple of small assumptions led to this incident and Zahan agreed that there was no way that it should have gone down.

Our team’s close call showcases the complexity of the game that we play in the mountains. Pro or weekend warrior, the value of continuing your avalanche education is completely priceless–and no matter who you are, communicating with your partners or team is of the utmost importance.