The Far Out Ones: Kai Jones

Who’s that little kid on the big screen sending with the big dogs? 12-year-old Kai Jones’s season was one of superlatives. Even though he might not even know what that word means (actually he does, we checked), he certainly knows what big mountain skiing means. Growing up in the Tetons is certainly a way to jumpstart a ski career, and Kai took off and ran with it this season. When the snow seemed like it would never stop falling at Jackson Hole, he squeezed every last day out of his spring break to tee off huge airs and rip classic out of bounds lines. Come spring, he put those hard-learned skills to the test in the backcountry, ticking off some classic spring descents in the big mountains. Check out his ode to youth in this year’s TGR ski and snowboard film Far Out, presented by REI.

Kai, now that it’s fall you’re back in school again, did you have a good summer?

[laughs] Yeah, it’s a bummer, but at least that means we’re getting closer to winter! My summer was really fun, I’ve done a lot of biking and some traveling to ski in Oregon. I also got to go to some of the premieres of the film, like Park City where I got to hit the water ramps and the airbag at the Olympic center and learned a bunch of new tricks like a double backflip and a rodeo 7. Biking was super fun though, I got to race the enduro at Grand Targhee which was something new!

What’s it like to see yourself in a big film for the first time?

I thought it was a really good experience, because it’s always been a goal to be up there on the big screen. It’s a really cool feeling to know that all that hard work throughout the winter actually paid off, and now thousands of people are enjoying it. 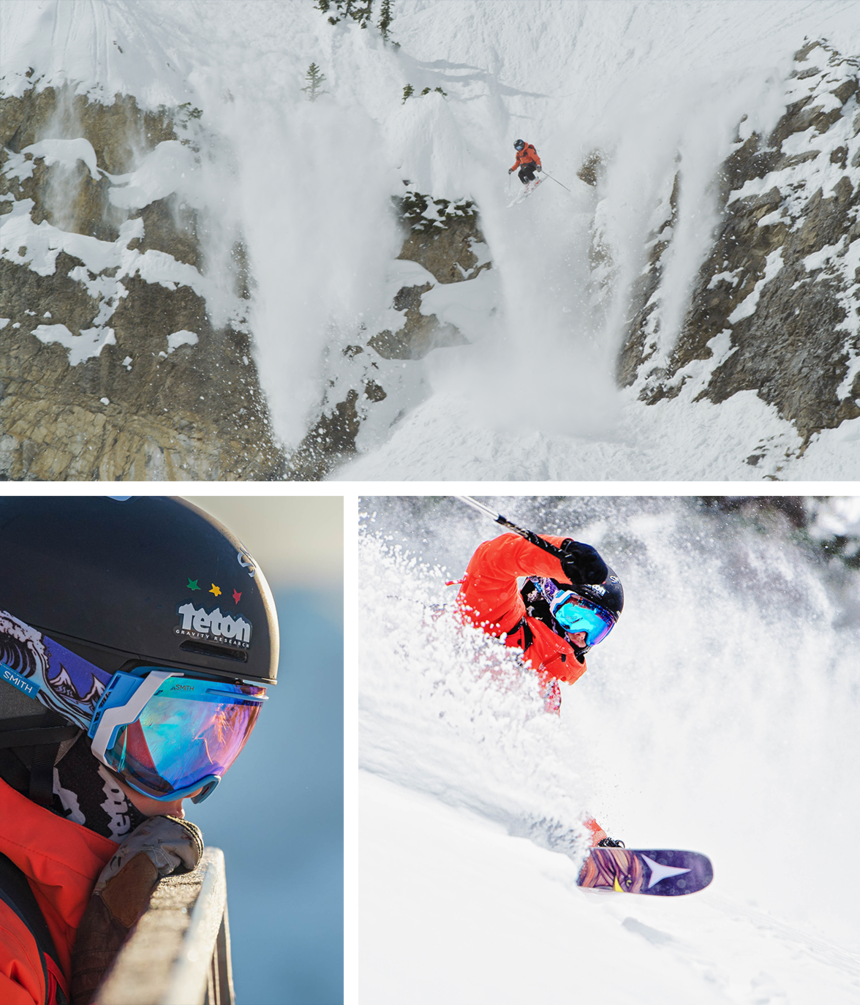 Whether it's dropping cliffs or getting faceshots, Kai Jones knows what's good in life.

How does it feel to be standing in front of the crowd at the premiere, knowing you are part of the team now?

It’s pretty cool to be standing up there in front of hundreds of people, they get to see how small I actually am compared to all the other athletes! I haven’t gotten too many questions or comments from the audience yet, but I can definitely see it on their faces that they are like “Huh, I wonder what he’s doing up there?” Most of my friends were at a soccer tournament during the World Premiere in Jackson, but some of them skipped just to come see the movie, so it was great to see some of them in the crowd at the home premiere.

With winter right around the corner, what have you been doing to prepare?

Right now, during the school year I’m pretty busy playing soccer, which is probably my favorite sport outside skiing. Last weekend, we went to the Idaho District Championships and took home second place, so I’m pretty proud of our team. Soccer and skiing aren’t really that similar, but the competitive aspect and the fitness really help. I’m also doing dryland training, I rock climb, and I'm spending as much time on my trampoline as possible. Climbing is really good to build strength, and it helps me be patient while I’m out there filming. Outside of that, I draw a lot of pictures of skiing, which really helps me visualize lines.

Last winter, you started taking backcountry skiing pretty seriously. We went on that tour in the park, which was your first real ski touring mission. Tell us a little more about that.

Yeah, last winter I went on my first real ski tour, back in January in the Park, and I thought that was a really cool and eye-opening experience to be out in the mountains with such great people. I learned a lot about pacing myself on skins and techniques for moving through the mountains. We definitely had a fun run down, but I took more out of the tour part of it.

When it came time for the rappel that day, I was definitely pretty nervous, but once I was actually hanging I got pretty comfortable.

After that day, were you pretty hooked on the whole backcountry skiing thing?

I think that day really made me like it. After that day, I actually went straight to California to ski with Chris Benchetler for a video piece with Atomic. We did a lot of touring there, something like five hours a day for three days straight. Skiing with Benchetler was awesome, he’s so cool! It was the first time I ever met him, and he’s definitely one of my idols because he’s such a positive person and always safe in the backcountry. 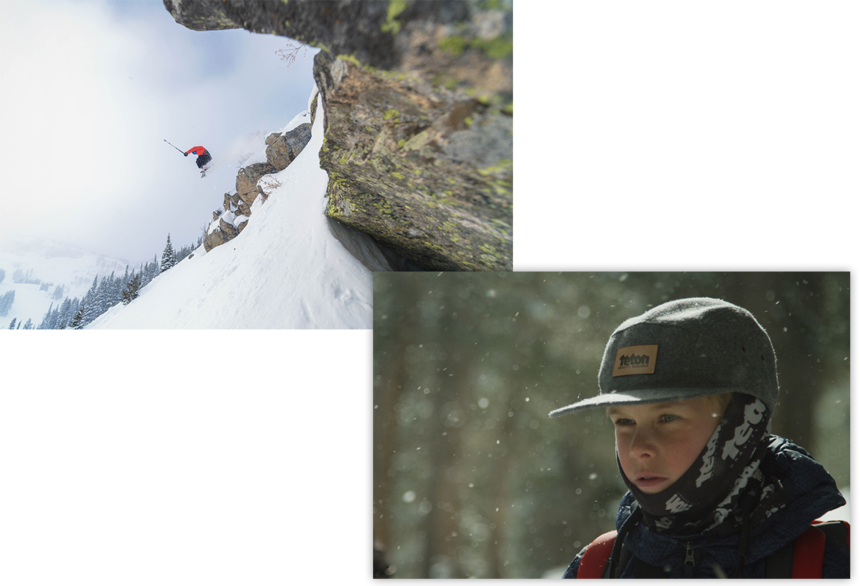 This past season, Kai Jones moved his skills to the backcountry, gaining a newfound appreciation for the mountains along the way.

That’s a busy season, how did you balance it with school throughout all that traveling? How many kids in your school ski?

Yeah! I mean I have to travel mostly on vacations and weekends, and then I have a tutor to help me catch up on things when I’m gone. Surprisingly enough, there’s not really that many kids who ski that much in my school. We have this school thing called Winter Sports, and that’s really the only time I see a lot of them ski. There’s probably like five of my friends that ski every day they can, and then maybe 100 kids that ski once a year.

So school breaks are when it all goes down. It looked like your Spring Break was one for the ages, you teamed up with Tim Durtschi and took Jackson Hole by storm. How was that?

Spring break was a really big filming opportunity, it snowed a bunch and everything was really filled in. We kind of picked out what we wanted to do, and everything pretty much went as planned. I hit a bunch of really big stuff like Smart Bastard and Picket Line, Once is Enough, and Alta Zero. Really just a bunch of the Jackson classics, all in one week!

When I first found out about it, I was like “are you crazy?” and kept studying it until it finally happened.

Smart Bastard is a healthy-sized air, and such a classic. Tell me about how it went down.

I thought that was a super good experience because I had been thinking about it for so long. When I first found out about it, I was like “are you crazy?” and kept studying it until it finally happened. It was awesome to just bring it to life. I was up there with Tim Durtschi that day, who did a huge three off it. We woke up really early and got early tram, then got released by ski patrol. Tim and I separated from the camera crew and Tim took me up the hike to the top of the cliff. I was definitely very nervous, more because I had thought about it too much. I wasn’t scared that I was going to hurt myself, but I was a little afraid about not committing, so I really just had to point it off the lip and trust my instincts from there. 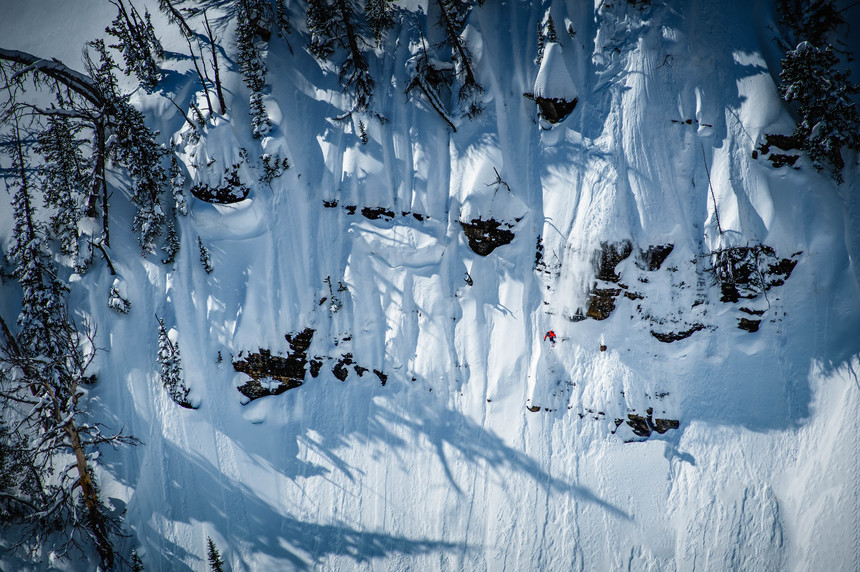 Spring Break was one for the history books. Kai Jones takes a sizable Jackson Hole air.

Overall, was that the highlight of your season?

I think the highlights of my season were two things: Smart Bastard and winning the North American Freeskiing Championships. I think that was an even bigger highlight because it was such a buildup, and I had a tough season leading up to the finals. I crashed a lot. Before finals, I had two wins under my belt and needed a tenth place to qualify in the comp before at Targhee. I went way too big and crashed again, but luckily there were only 13 kids in the comp and three of them crashed, so I got a ninth place and made it to finals and I was stoked! During finals in Snowbird, I chose one of the biggest lines that day and it ended up working out.

Do you think skiing in competition influences your skiing for the camera?

I think comp skiing influences my film skiing a lot, because now I know how to link things up and actually ski longer lines in one go. That helped with things like skiing Alta Zero in Jackson this year, it’s a long chute with a mandatory air.

At that point, I already had that mindset for actually skiing lines through, rather than just standing on top of a cliff and hitting it.

I think that was one of the biggest things I learned last season, before that I was often too nervous to even ski into gnarly lines, but now I feel good with it. Just keeping myself moving is important.

I want to hit some big lines here at home like Hoop’s Gap, right under Thunder Chair. It’s weird because it’s a double that you can clear as one big cliff. I also want to hit Smart Bastard again and do a grab off it, and spin and flip off some other airs in Jackson and Targhee. There’s some zones that I sessioned a lot last year that I think I can take some bigger tricks like sevens to this season.

I want to keep a good balance between competition and filming, so I definitely want to compete a lot too to defend my title. Beyond that, I really want to go to Alaska and I’m hoping that everything comes into play for a film project up there!