The Gear Jeremy Jones Trusts In Ode To Muir

Through years of experience traveling the world with his snowboard, Jeremy Jones has become a master of the sport and an artist in the eyes of many.

Throughout a career that has taken him from the spines of Alaska to the icy slopes of the Himalaya - crossing just about every major mountain range in between - Jeremy Jones has gained a wealth of experience. However, safely navigating treacherous terrain in the greater ranges of the world takes not just experience and skill, but also a keen eye for what equipment to take (or leave behind). Last spring, Jones teamed up with Elena Hight on a formidable mission even by his standards: a fully foot-powered expedition following the footsteps of naturalist John Muir through the Sierra Range. The adventure was chronicled in TGR’s newest film Ode to Muir. While close to home, the trip pitted the self-supported team against the elements for over a week as they climbed, rode, and camped beneath a dozen epic lines.

On their expedition retracing the footsteps of John Muir, Jeremy Jones and Elena Hight climbed and snowboarded an average of 5000 feet per day.

Explore the gear that made Jones and Hight’s expedition not just possible, but comfortable, and learn some valuable lessons about what it takes to spend 10 days in the mountains chasing big lines on splitboards.

Before setting out on any backcountry trip, whether it be a quick few laps outside the resort, or a month in the Himalaya, proper prep is essential. For Jones, that prep starts long before any trip, in the form of keeping his body and mind in proper shape for spending long days hauling heavy loads. He admits it is often the hardest part of any adventure. As Jones and Hight left the trailhead, he shared some wisdom with her.

“By the end you're going to be a lean and mean hiking machine. Life's about to get a lot simpler. Food, shelter, water, snow. See what the mountains are giving us. We have a lot of food, a lot of time and no real plan. Happy to get out of the trailhead. The crux is behind us!”

Planning a route through mountains unknown is often the make-it-or-break-it moment for an expedition, but for the Ode to Muir adventure, the whole point for Jones and Hight was to not have a real plan. However, organizing logistics to safely travel through the mountains was still a necessity and presented a challenge. The team needed to how much food to bring, the location of water sources, and where and when to organize a pick up on the far side of the range. 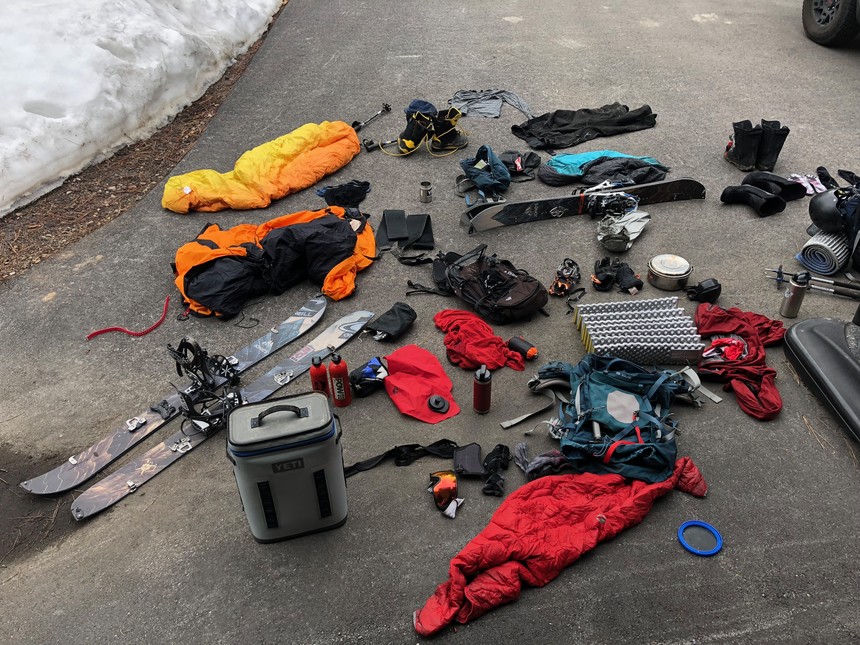 Somehow, Jeremy Jones made all of this fit into one pack - and carried it all for nine days.

Once that was figured out, it was time to head to the trailhead. While the mission was to disconnect and find unexplored places, getting there meant spending some quality time in the car. To keep food and beverages cold for the trip, Jones and Hight packed up their Yeti Hopper, a soft-sided cooler perfect for throwing in the trunk of car on the way to the mountain. The secret 21+ ingredient inside the cooler? A few six-packs of Sierra Nevada Pale Ales.

Jones is no stranger to walking long distances to go snowboarding. However, the granite giants of the Sierra adventure brought that to a new level. Over the course of nine days, the crew covered over 40 miles, rode 12 big lines, and climbed an average of 5000 vertical feet a day, all without the support of chairlift, snowmobile, or helicopter. Of course, that many vertical feet requires the fuel to back it up, and proper gear to ensure safety and efficiency on the ups. Through years of experience, Jones has developed a pacing strategy that allows him to walk for days at a time. His advice is to keep it in second gear all day long, moving dawn to dusk, and take extended breaks in pretty places.

“Oh, dude, this is the good stuff, waking up, blank canvas, beautiful mountains, no one around, have everything we need, and yeah, I'm gonna go play in some tall mountains today. Price of admission, lots of calories, lots of food, lots of water, and a lot of walking.”

In terms of how many calories, Jones reckons by a simple rule: eat a lot. "I sometimes think it's funny that people swear by rules like eat X amount of calories per 1000 feet, but I just eat as much as possible every day, with lots of water," he says. His favorite mountain snack comes in convenient packaging and has never left him hungry in the mountains: Clif Shot Blocks.

When moving through wintry mountains, that beautiful white surface we seek out comes with a hidden danger: reflected sunlight hurts our eyes far more than we often expect. The need for proper eye protection is paramount, and Jones turns to POC’s DID sunglasses for a stylish and protective pair of shades. 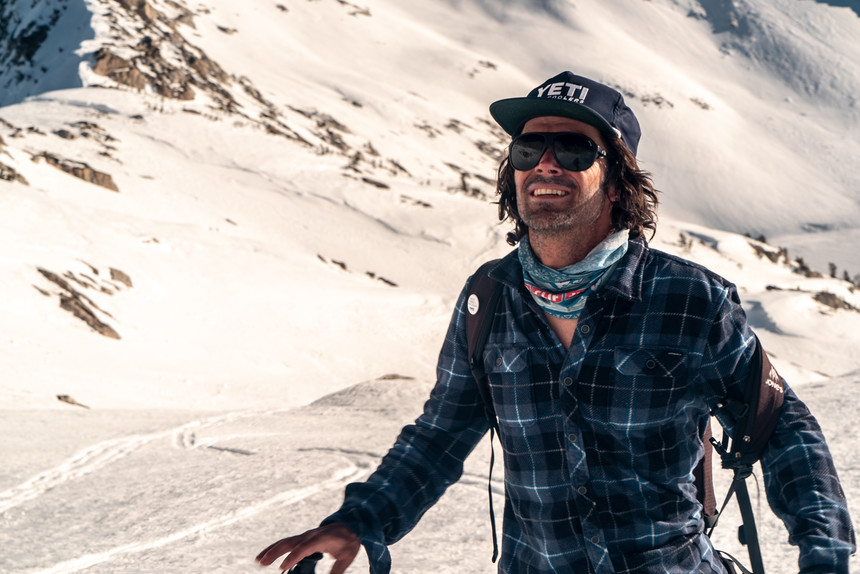 Eye protection is crucial in the harsh light of springtime mountains, and Jeremy Jones turns to a trusted hat and sunglass combo.

Of course, Jones wouldn’t be going into the mountains in the first place if it wasn’t for his snowboard. After years of testing, riding, and refining, the Jones Solution splitboard is still Jones’s go-to board for long backcountry missions. Its light weight coupled with a stable yet surfy ride style make it perfect for foot-powered freeriding. To make the machine go uphill, Jones uses the Jones Nomad Pro Skins and a pair of Jones Explorer Carbon Poles.

On long trips through the backcountry, the time spent doing nothing at all is often the most rewarding. It allows the mind to slow down and appreciate the little things, bringing into focus the bigger picture, like realizing the purpose of their mission. Setting up camp after a long day of walking and riding allowed the team to settle down, unwind, and take in their surroundings, making memories that last a lifetime.

“My wife will attest that I forget simple things every day, a loaf of bread, a gallon of milk, but when it comes to mountains I can recall the finest detail of something I walked up and snowboarded down 10 years ago, 20 years ago. Vivid detail of every camp I've ever had. Every night under the stars. I guess that's clogging my brain.”

When out in the mountains, getting a comfortable night’s sleep is paramount to success. No sleepie, no walkie. However, leaving some of the luxuries behind is half the fun, and besides, who wants to carry all that weight? For eight nights in the Sierra, Jones opted to make his home in the MSR Advance Pro 4-season tent, a lightweight and weatherproof solution to winter camping. Inside (and often outside) the tent, Jones slept on a Thermarest Z-Lite sleeping pad. Words of wisdom: "If your inflatable pad gets a hole, you're pretty much hosed in the backcountry."

Part of camping is an epic campfire, right? Well, not when winter camping in the mountains. However, the team needed to fuel up, and delicious dinners were cooked thanks to the MSR Whisperlite stove. The powerful and efficient liquid fuel stove has been a go-to for mountaineers and backcountry travelers thanks to its ease of us and easy field maintenance. After eating some hearty meals, the crew would hang out watching the sunset fall across the peaks with a hot cup of tea in hand, held warm thanks to their Yeti Mugs.

Setting up camp every night became a ritual, and Jones looked forward to spending cozy nights in his tent.

Even with the advent of canister fuel stoves, Jones insists on a liquid fuel stove like the Whisperlite. "Canisters are convenient for mid-day coffee breaks, but when you want to cook a meal day after day, nothing beats the reliability of a bottle of liquid fuel and a high-power stove like the Whisperlite. I've been using mine for years and it never seems to let up."

Over the course of the Ode to Muir expedition, the team rode 12 big lines, ranging from pinner couloirs to wide open faces peppered with features like cliffs and natural airs. The springtime Sierra snowpack proved stable for this kind of riding, but safety was always a priority, especially since being so remote compounds any consequences of a fall.

As a lifelong rider and now a husband and father, Jones knows the importance of proper safety gear. Of course, he always travels with necessary safety equipment like a beacon, shovel, and probe, but Jones also likes to remind riders that the most important piece of equipment they can carry is their brain. Protecting that vital piece of equipment is important, so Jones always wears a helmet, especially when riding big terrain. His choice? The POC Fornix Backcountry helmet. 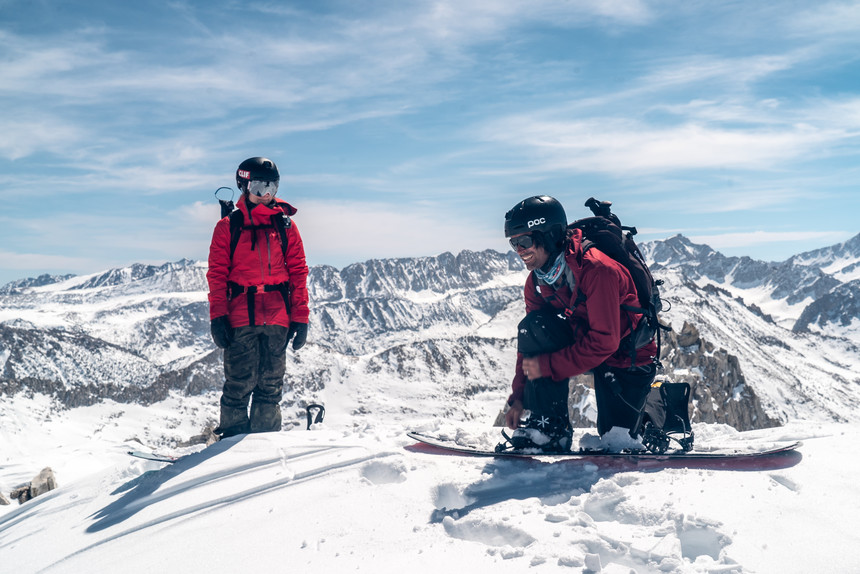 At the top of every line, the team underwent the same process to get ready to drop in ready to shred.

When it comes time to drop into the line of his choice Jones trusts his feet to his signature snowboarding footwear, the Thirty-Two Jones MTB boot. The snowboard-mountaineering oriented boot offers a comfortable fit, a huge range of motion for skinning and climbing, crampon compatibility (a huge plus in his book) and a just-right flex for charging big mountain terrain. One thing Jones learned in the Sierra was that these boots offer superior moisture management, leaving his feet much drier and more comfortable than expected. 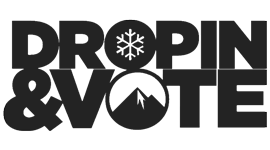