The Far Out Ones: Colter Hinchliffe

While Colter Hinchliffe is no longer a young gun on the TGR roster, it seems he grows up less and less each year. To be honest, that’s not a bad thing. The Coloradan’s youthful enthusiasm in the mountains, whether its skiing, rock climbing (or both at the same time) never gets old. In years past, that has taken him all over the world with TGR. What started with 2012’s The Dream Factory, led to a high-energy edit from 2013’s Co-Lab, morphing into banger film segments in Austria, Japan and Alaska. Personifying the mantra that the journey is as important as the destination, Colter Hinchliffe scored big in Terrace, British Columbia this winter. Sharing the segment with his brother-from-another-mother, Tim Durtschi, and young buck, Parkin Costain, Hinchliffe embarked on a road-trip odyssey to discover unexplored zones and whispered-of basins that remain mostly untouched by all but the most hearty of BC locals. Upon arriving in Terrace, the trio were unsure of where to find the goods, but luckily, everyone told them to get in touch with the same guy, Brad. Hinchliffe looked him up and messaged him on Facebook, and before long the TGR crew made their way to a lodge on the Skeena River, where they met and befriended Terrace local Brad Zeerip. Brad knew all about the local terrain, how to avoid the wind-scoured zones, and eventually persuaded the boys to ditch their sleds and commit to foot-powered travel. Zeerip spent many days guiding the TGR team around his favorite stashes — always getting some powder laps in for himself — while hooting, hollering and pointing Colter to the more extreme aspects and features. For a better understanding of what this year’s sessions in Terrace were all about, check out TGR’s Far Out, presented by REI.

Tell us about your early life. Where did you like to ski?


I was born in Aspen, Colorado, but I was raised in a small town 30 miles away called Basalt. It was a little ranching community that transformed as a I grew up into a commuting town for Aspen. It had a high hispanic population, which was cool because I got to experience another culture as I was growing up.

I was continually making the trek to Aspen to ski as often as I could and tailored my schedule in high school to be able to ski every other day. I was always just a freeskier; I never did any race programs or anything like that. I’d go to the hill with my friends and ski wherever I felt like skiing that day. The park scene hit pretty hard when I was a teenager. People were trying tricks — it wasn’t so technical with dub corks and double grabs and all this crazy shit. It was just people trying flairs and backflips and all these classic tricks — it was pretty fun to watch and be a part of that and also get a little bag of tricks of my own. But I would always get back to skiing all over the mountain. That’s what I’ve always loved — the soft landings and adventure. 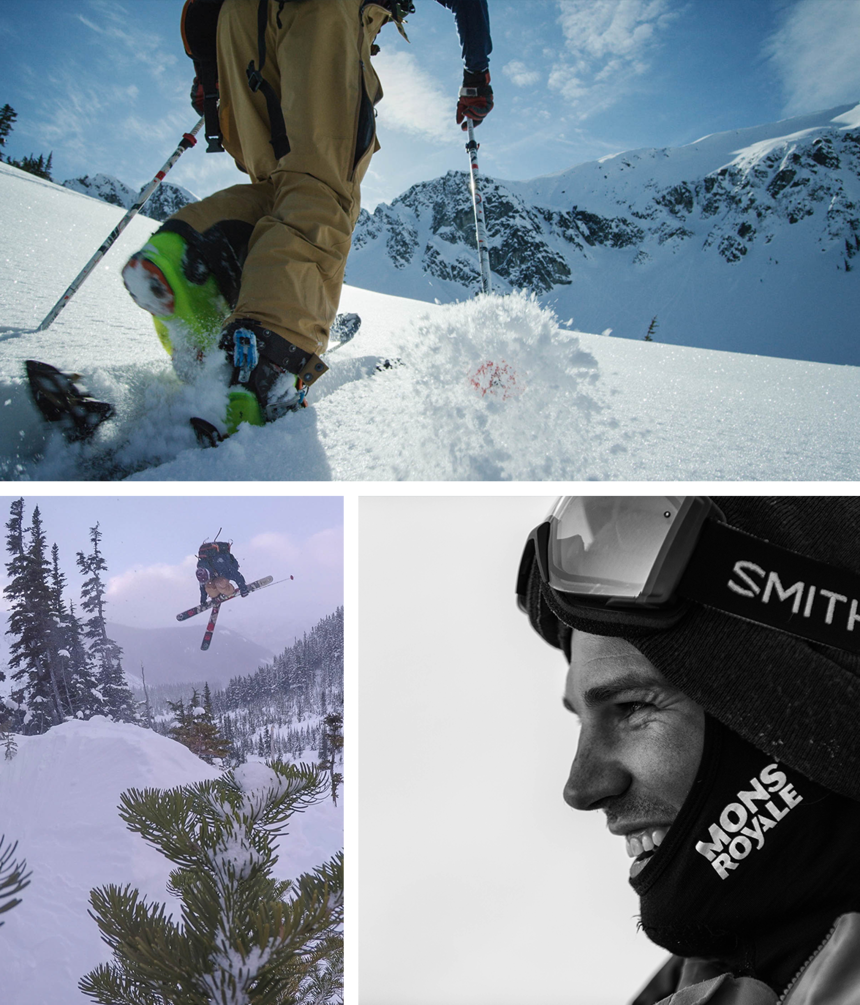 At 18, I went down to college in Grand Junction, but I quickly realized I was wasting my time as I was sitting in class in February. I came to the conclusion that I could not go to school and should be skiing instead. Mesa State was a kind of a tough mix of people: a whole bunch of Republicans, a whole bunch of old people, a whole bunch of meth heads — I didn’t do well there.

What do you like to do when you’re not skiing? What are your side passions?

Besides skiing, I love climbing and fly fishing, which I actually just started doing this summer. It’s been fun to progress in that sport and see the rivers from a different vantage point and connect with nature in a new way. But other than that, I really love rock climbing — that’s my jam!

Climbing is a good sport because it’s an open-ended progression. Other sports, like skiing, seem to have a plateau where you get better, you get better, you get better, then you’re kinda as good as you’re gonna be. Because, if you go any harder you’ll probably hurt yourself. Climbing isn’t quite like that, because you can always climb something harder and get stronger. If you fall, the rope’s going to catch you, so it’s a pretty safe sport. As long as you tie your knot correctly and have a good belayer, you can really push your limits, which I really love, plus the fitness and mental aspect of it.

Also, all three of those sports allow me to travel and see areas from a different vantage point. I think that’s the best way to see places, the best way to connect with places, you know, you go skiing and you get to connect with locals because they’re fired up to ski and they’ll show you something. And it’s the same way with climbing. I’m currently in Bozeman, and we climbed an amazing route yesterday in Gallatin Canyon where we were way above the river. It’s just a special way to experience a place. 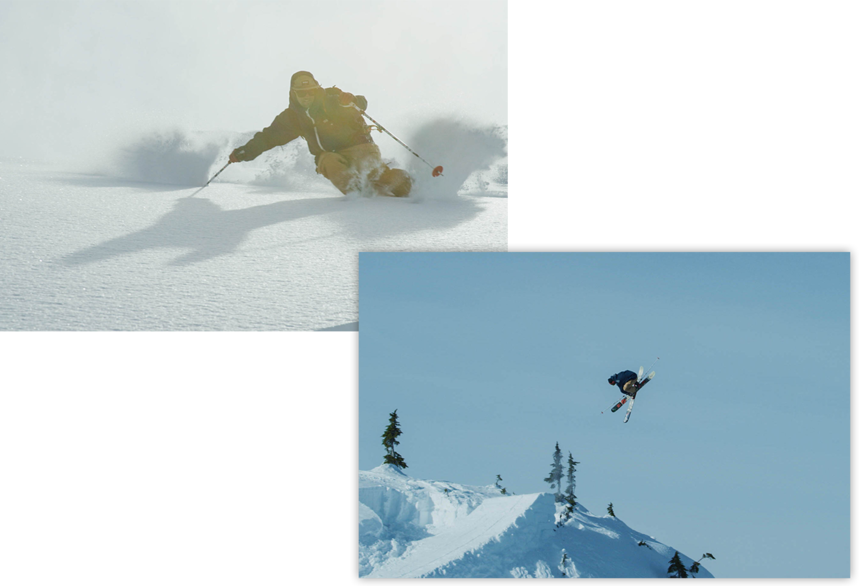 What are your favorite destinations and why?

Every time I go somewhere, I compare it to Aspen because I grew up there and I’m still there. You’re always looking for another spot to potentially go. Ultimately I want to be somewhere that has all the things I’m looking for: skiing, climbing and fishing. Bozeman’s nice. Bend, Oregon has potential. Europe is great. I don’t know man, I just don’t like anywhere as much as I love Aspen, to be honest. It’s got everything I want.

I don’t know man, I just don’t like anywhere as much as I love Aspen, to be honest. It’s got everything I want.

I was in Bariloche a few weeks ago, and I really love that place. It’s super beautiful. It has tons of mountains, the skiing’s really good — and the climbing looked amazing. I really want to go back down there with my climbing stuff and do some skiing and climbing, just a multi-sport mission. I think that would be a really fun way to experience that place. Plus, the rivers have fish in them as well, so that’s an area that’s high on my list to return.

My ultimate powder session would be on one of the few chairs that I love riding in the world, like Wildcat at Alta, Deep Temerity at Highlands, or the gondola at Ajax. Just a free-refills, snowing-hard, nobody-there type of day, with a handful of friends.

That sleeper pow day feeling where there’s not a big hustle. You don’t feel like your line is gonna get skied — or maybe you already skied it twice — but it’s just filling up, and every run gets better and better.

Those are the days I live for.

What about filming Far Out this year? You joined Tim Durtschi and Parkin Costain in Terrace, BC. How did that go?

We drove super far north. It was one of the burliest drives I’ve ever done. I was really dreading it, but it was not so bad to be honest. It was a 40+ hour drive for me, from Aspen, to Terrace, British Columbia.

We didn’t know anything about what we were getting into, which made it really challenging

We didn’t know anything about what we were getting into, which made it really challenging. We spent a lot of time sledding into new zones just to find out there wasn’t much there. It made it difficult for us to get a whole ton of action shots, but the whole experience was really awesome — I love that adventure.

So, it was an adventure-filled, logistical puzzle the whole time. But we got to meet some locals that way because we were always scratching around for knowledge. We met this legend of a guy named Brad who took us in, brought us into his home, fed us and shared some of his favorite secrets. We ended up having a great time skiing in some of these zones that he showed us and got some cool shots that way. 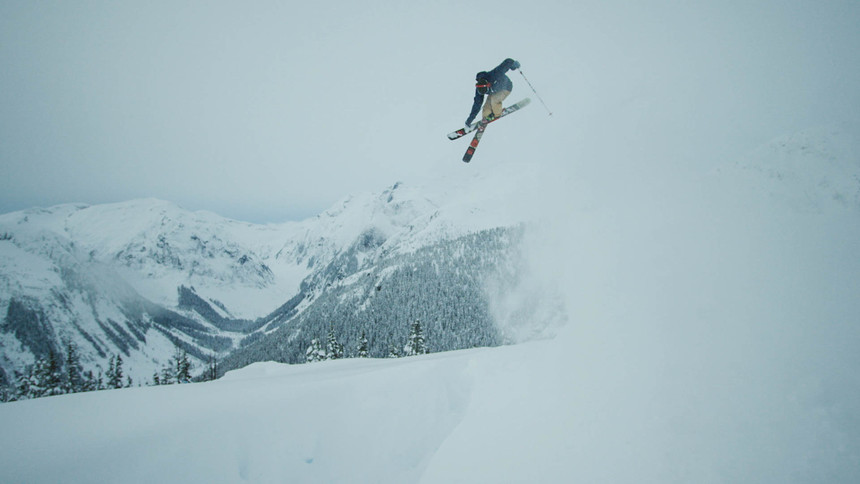 Brad gradually persuaded us to do more touring, and less of what he called “sled-fuckery”. He has a sled, but he was just all about touring the side country off of the local ski hill. The inbounds was very tame, but the surrounding backcountry was really epic and I’d actually like to go back and explore it more.

And that was all due to his push to do less “sled-fuckery” and more ski touring.

Plus, there were a couple areas similar to that where the sled would get us into the zone, then we would dump the sleds and start skinning from there. So with Brad, we ended up doing more sled-assisted ski touring. And that was all due to his push to do less “sled-fuckery” and more ski touring.

How did you find Brad?

We were just asking around pretty shamelessly. … Locals would be talking to us and the name Brad kept coming up. People kept saying: “You gotta talk to Brad!!” Everyone we asked kept pointing us in his direction. I ended up looking him up and messaging him on Facebook. He got back to us pretty quickly and invited us over to his house, which is a lodge on the Skeena River. That was just the beginning — we ended up spending quite a few days with him getting out into the mountains. I’m very thankful that we met him.

We’ll probably be friends for life! 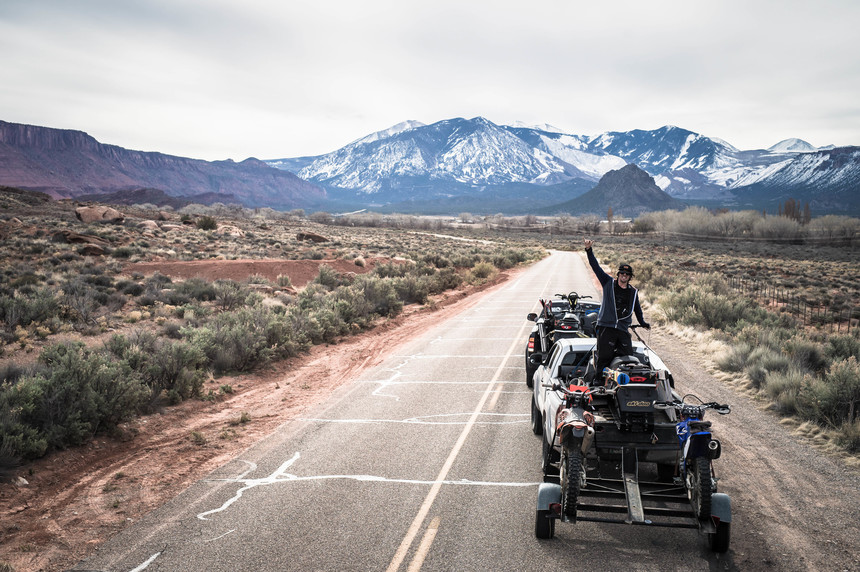