The Far Out Ones: Dane Tudor

If Dane Tudor were an animal, he would be a wolverine. His strength is unmatched, and he can often be found in solitude, building jumps or constructing a live-in trailer. But what makes him most like a wolverine is how he moves in the snow. Dane Tudor comes alive in the winter. Whether he’s ski racing, competing in big mountain comps, hitting park jumps, or on a foot-powered mission deep in the mountains, Dane excels at his craft. With ten years of filming - ten years of constant progression - it would seem as if there’s nothing left for Dane to do. But last season he put together yet another impressive segment in TGR's FAR OUT. I caught up with Dane this summer to hear about his history and his future.

Can you talk about being “Far Out” in Canada this season?

The thing about the Canada trip and camping in general is that I really enjoy being out in the mountains, removing myself from society. I enjoy adapting to the wilderness environment, sleeping in the tent, dealing with weather conditions, ski touring. I feel like an animal in the natural world, that’s what it’s all about for me.

This is your third camping trip with TGR. But originally you were a contest skier, trick oriented. Talk about the evolution of your career.

Overall in life, I feel you can follow any path you choose.

As for skiing it’s been an evolution of my approach to the mountains and growing as a person. I grew up skiing at Red Mountain, a great place for powder pillows and tree skiing. I feel as if the hill raised me, in the skiing sense that is. I skied in the Nancy Greene ski league as a youngster and later raced with the Red Mountain racers. I feel ski racing had a huge impact on my technique and how I ski the mountains today. Between ski racing and shredding the hill I also competed in big mountain contests, I traveled around BC and attended the Crested Butte Freeskiing Championships for about 4 or 5 years. I was a strong competitor and placed 1st or podiumed at every event.

I loved watching ski movies as a kid, I think that’s where my interest in tricks and filming came from.

When I started filming as a youngster, all I wanted to do was tricks in the backcountry.

As things progressed and I started filming with Jeff Thomas at Theory-3 I started realizing a lot of my backcountry trick dreams and found the park a great place to practice new tricks. This sent me into the world of park contests and practicing tricks to bring to the backcountry. That phase of my career lasted about five years, all the while staying focused on skiing big mountains in Alaska. 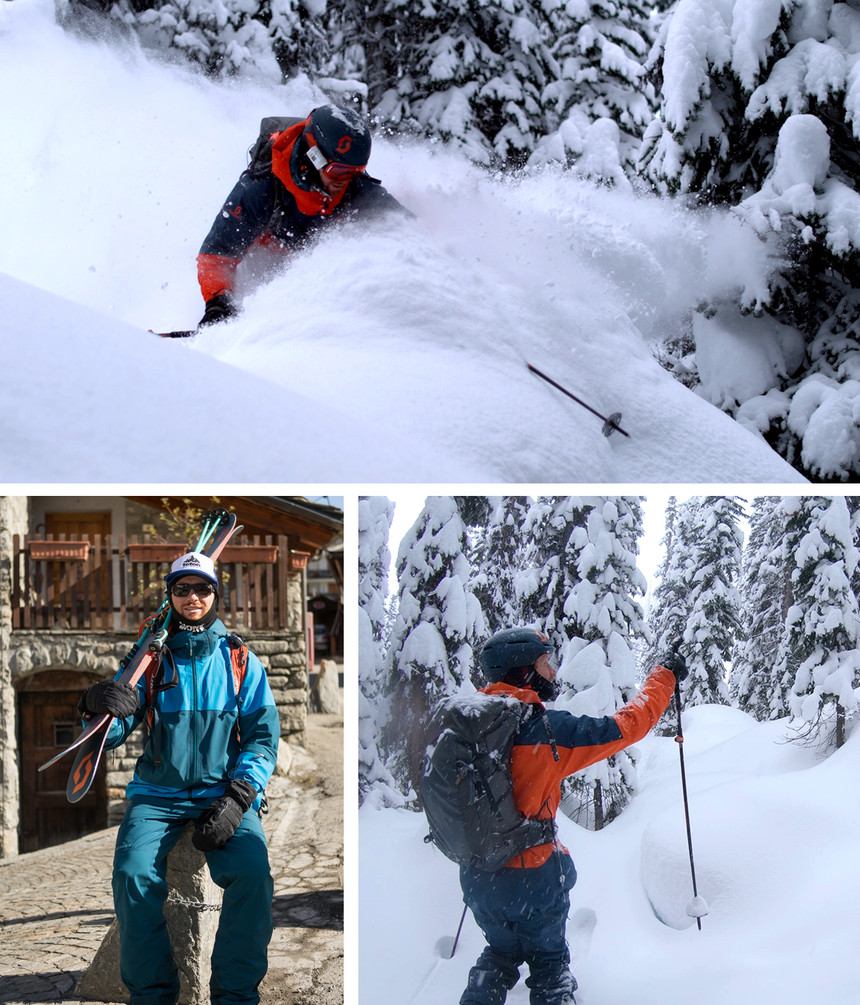 I like tricks, but straight shredding is really my main background and the core focus of my skiing today. When the opportunity first came about to go camping with Ian McIntosh and Griffin Post, (actually sage was slated for the trip, but I kept peppering the producer at the time Greg Epstien that I really wanted to go), so when Sage opted to go on the heli trip instead, I got my chance.

I had watched the Jeremy Jones movies and thought they were awesome but never thought that’s what I’d get into, I think my skiing evolution just took me there. I had accomplished everything I had wanted to in skiing up to that point, so the opportunity to camp, climb and ski in Alaska was an exciting direction to pursue.

What characteristic do you think you have that’s allowed you to stay in the game, at a really high success rate, this long while constantly reaching your goals?

I’ve been skiing in front of the camera since I was a kid and have been a professional film skier for ten years. It’s actually amazing how fast that time has passed.

Since I’ve had that freedom to follow my dreams from a young age, it’s enabled me to progress constantly and work through different goals and stay fluid, to keep things interesting.

I’ve explored many aspects of skiing and have learned from my mistakes. I continue to expand on my riding through a methodical process that I’ve developed over the years of film skiing, the key is knowing when everything has aligned and the timing is right for the type of skiing and footage I’d like to produce. It’s about skiing smarter not harder. I always get in this bar argument with people that there is no such thing as natural talent. That everything is learned. Do you agree with that?

Hmmmm it’s funny. Everything is definitely learned, but you have to have talent. Maybe I’m a naturally talented person who likes to learn different things. Or maybe i’ve just acquired all those skills over a lifetime and they appear in different forms or talents. Maybe it’s a mixture of both.

Where do you think your confidence comes from?

You know some days I feel confident and some days I don't. It all depends on my energy levels and what’s happening on any given day.

Do you think there’s anything that holds you back in your career.

Probably the fact that I really enjoy trips when I’m on them, but have a hard time committing to them. Sometimes I feel like I can be a bit tentative-but at the end of the day that keeps me safe. I want to stay safe while pushing the boundaries. 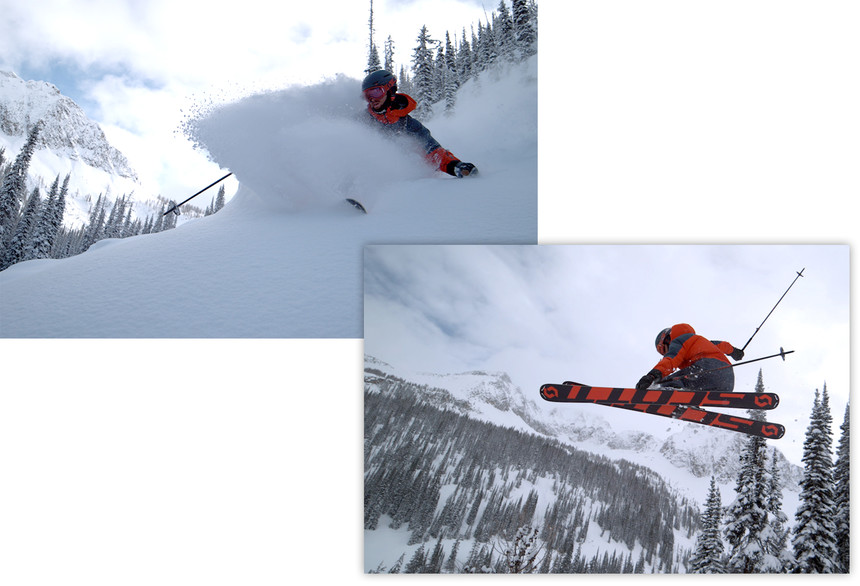 The wild wolverine, aka Dane Tudor in his natural habitat.

Has your relationship with risk changed over the years?

It’s changed in the sense that I understand the risk and have learned a lot about my body. For me it’s really important to be injury free, this thinking has made me more in tune to my mental and physical state.

I’d like to say that I’ve become more conservative, but the reality is I still ski crazy lines at certain moments.

It’s about understanding and knowing yourself and recognizing those perfect moments-when the snow and light is perfect, your in the zone, that’s when you can perform at a really high level with higher risks. But if one of those elements is off, the risk is higher and the game is changed.

Growing has given me the most knowledge. In doing my best to sustain this career has taught me a lot. When I was in my early 20’s I was just so stoked and my focus was on winning skier of the year and having the best segments. Now, I’m still stoked and love skiing, but it’s become more important to make my career sustainable-stay injury free and be professional about how I go about doing it. I want to ski well, get great footage, and not feel the pressure to push the content every year, rather achieve my goals while staying safe. It’s more about beautiful footage.

Do you have a formal goal setting process?

I write down goals here and there and do my best to pursue them all while letting the season guide me and ski what is presented.

How do you see your career go from here?

I’d like to make it to 40 as a professional skier.

That would be amazing-20 years of film skiing. I’m going to keep on riding and enjoying the dream and see where the evolution takes me.

After filming for 10 years, I imagine that you’ve had so many different partners in the mountains. What does that partnership look like to you?

Working with TGR has been fun, I originally joined on because TGR’s heli segments were so strong and I was looking to ski with Ian Mac and Sage in Alaska. I also appreciated TGR’s dedication to safety with the creation of IPRW, a mountain rescue and training course where we train together in terms of group safety. I knew I’d be out with an experienced crew that had the proper safety protocols in place.

Yeah, I mean as humans it seems like we have this unsatiated appetite for progression. Which is awesome, but you wonder sometimes if it’s too much. Especially when career growth in a mountain sport comes with a lot of risk. Take someone like Alex Honnold for example. After he free soloed El Cap, people still asked him what he was going to do next. I mean the guy just accomplished the feat of a lifetime, how about nothing is next? So when I look at your ski career, you’ve done so many incredible, incredible things on skis. I mean we don’t ask the insurance agent at the end of his year-what’s next. This is your job, and there’s an interesting intersection between sustainability and progression.

It’s interesting once you’ve gotten to a point where you’ve done most of the things that you’ve wanted to do, so then it becomes the question of what do I do, what dreams do I have? Other than just simply skiing in front of the camera, how do you keep progressing as an athlete?

I love the lifestyle that skiing gives and figuring out how to continue that path is my goal.

For me, it’s about the freedom to pursue my passions and dreams, on skis and also in life.