The Far Out Ones: Parkin Costain

Parkin Costain first burst on the TGR scene when he won the 2015 #TGRgrom Contest. Even at the age of sixteen, he was riding big mountain lines with the confidence and poise usually reserved for much more experienced skiers. In the years that have followed, Parkin has progressed into one of skiing's most electric young talents and is ready for a breakout year. This winter the Whitefish, Montana local joined TGR in Terrace, British Columbia to film a segment for our new film Far Out, presented by REI. We caught up with Parkin to talk about the trip, hear about the rest of the winter, and find out what inspires his life in the mountains.

This was your first year filming with TGR. What was that like?

I had grown up my entire life with a very supportive family and my dad was always the guy out in the backcountry with me. There was a ramp that eventually escalated into working with TGR. It was definitely a goal all my life and it’s wild to finally achieve that. It started off with the TGR Grom Contest, entering that twice and then winning it the second year. After that, I was able to win the YG Quicksilver Contest. People started to take notice and I locked on with TGR.

I got the opportunity to go up to Terrace and was welcomed into the family for the first time ever without really meeting any of the crew. They brought showed me their ways and was able to have a great first trip.

What was your mindset going into that trip?

I definitely went into the winter open-minded and wanted to make the best of it. I had goals but wanted to make sure everything went as smoothly as it could.

There were some nerves on the whole drive up to Terrace, but I know that I’m capable and I’ve always loved skiing. I just had to trust that it was going to come out great. 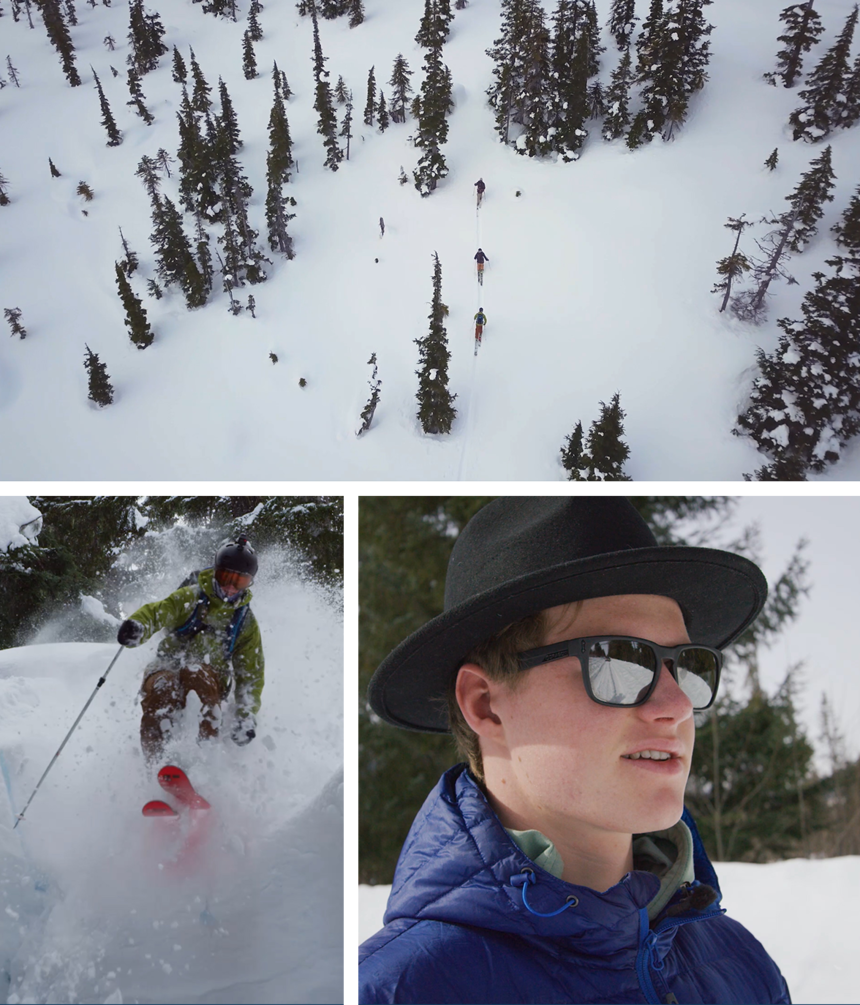 Who was up there with you?

I was with Tim Durtschi and Colter Hinchliffe, along with a super talented production crew. I don’t think there was a day where we didn’t just laugh 24/7. I could never get over the wittiness of Colter and Tim and all the antics that they would get into. Sometimes it felt like I was the oldest guy, but all we did was have a good time. Everyone worked really well together and made it super fun.

I think this winter I kept describing them as grown up four-year-olds. There are so many memories I have like Colter hanging from an excavator bucket while Tim swings it around. We had randomly run across this big piece of machinery in the middle of the woods. There was a lot of fun bickering with each other every day but in reality, they are just trying to help succeed.

It was really cool to be in a new zone that no one in the crew had been to. I got to witness what everyone gravitated toward in the backcountry. Every day we would go out and explore on our sleds. We never went back to the same zone twice. If we found something we like we would stay there for the day and then find a new place the following day.

Tim and Colter were pretty sick to ski with. Tim has a large trick repertoire and was able to throw down a couple of dubs and huge steezy cork 7s. I was really looking up to that, I hope I can be that steezy one day! With Colter, there was a huge jump we built over a knoll that he had a sick dub flat and a couple sick pillow poppers. Skiing that type of terrain wasn’t the main goal of the trip, but with the snow conditions we were presented with, we weren’t able to get into the high alpine. We just made it work in lower elevation stuff.

What was your most memorable moment of the trip?

There was this one booter that we built in this zone with a bunch of jumps. There was a super obvious spot with a steep takeoff and landing that no one had built yet. We knew we had to hit that. We spent five hours building this huge tombstone kicker, which ended up being my first double of the trip. It was kind of the perfect jump. It had such a steep a landing that when you hit the ground it never felt like you took off. That a highlight for everyone to hit that jump after a few days of struggling to figure out what to do and finding that was pretty sweet. 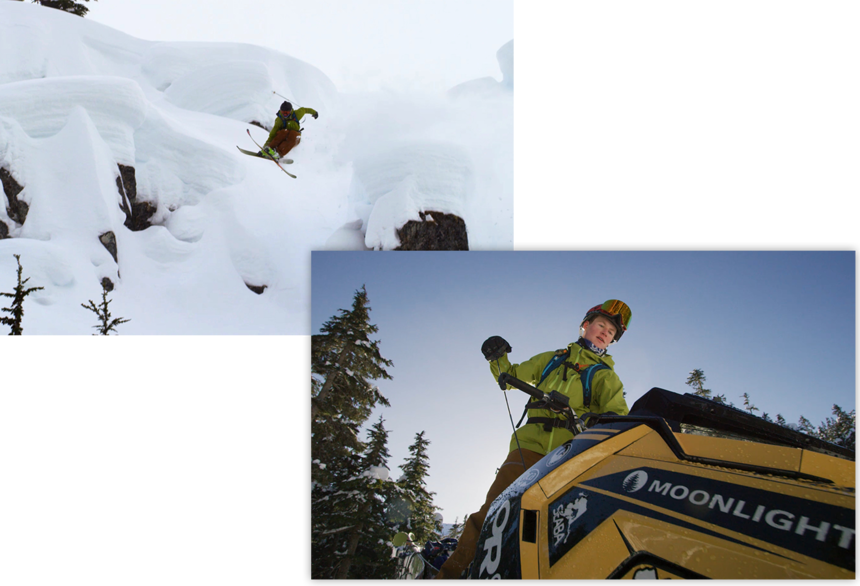 Parkin Costain sending in Terrace while filming for TGR's new film Far Out presented by REI.

You ended up in Haines, Alaska this year. What was going on up there?

This was my third year up in Haines. My first year I was just client skiing with my dad. It was sweet but you know there is so much out there if you are out with a production crew. Two years ago, when I won the Quiksilver contest and I partnered with the  SEABA Heli company. That was my first production year and one of the sickest times of my life. To be in Haines on my own, with a heli, with filmers was awesome. This year was my third up there and everyone was even more dialed than in the past. I got to spend a month up there and it was crazy what I was able to ski. 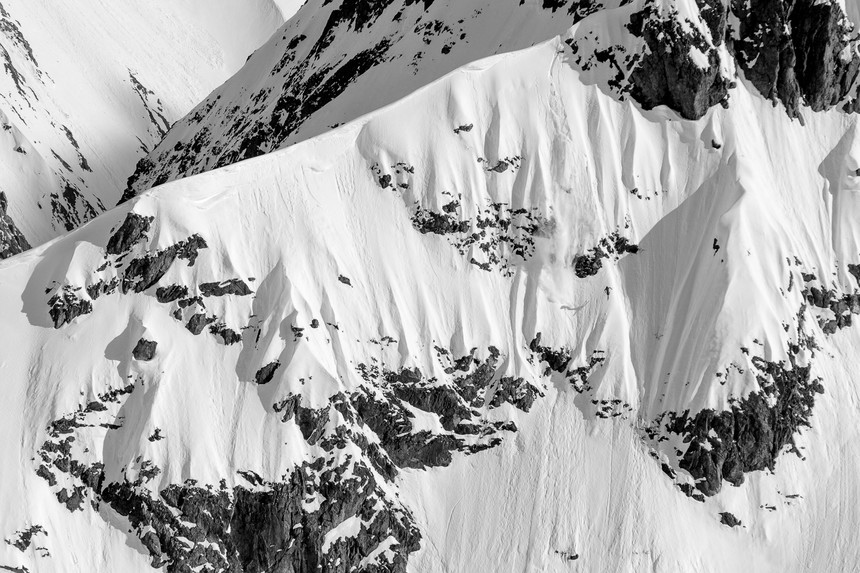 Since it had a lower snow year up there it just made everything look more treacherous and better on film. A line that is usually pretty mellow to ski and is normally all covered with snow would turn into a super sharky rock face but with a thick spine on it. We were fortunate to get some top coats of snow so it turned into some big mountain gnarly lines type of trip. It’s definitely Alaska so everything is cool.

For a week of that trip Tanner Hall and Henrik Harlaut showed up. I met those guys for the first time on the heli and to shred with them for a week was unreal. Tanner is from the same area of Montana as me and started skiing on the same stuff. That connection was really cool, just knowing we are both from the same town and getting the chance to ski together was incredible. He is just a legend. Henrik is such an all-around shredder and his freestyle skiing is the best in the world. It’s just amazing to witness him throwing down these massive freestyle moves in Alaska. 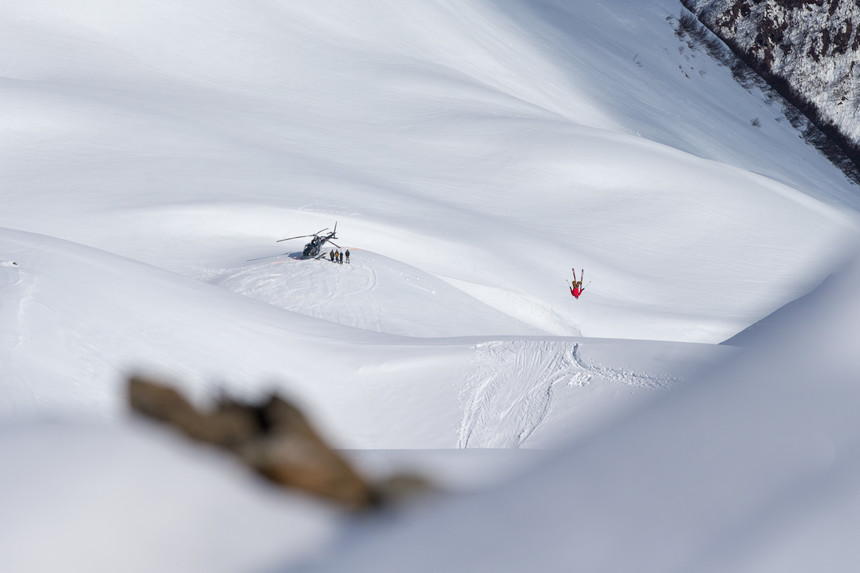 What's it like to be in the mountains with Tanner and Henrik?

Tanner is definitely a hype man. The whole time we were up there he was never down regardless if he was landing tricks or if the snow was bad. He was always positive. When the snow wasn't good he found this natural quarterpipe to hit. He is always moving a thousand miles an hour and just so stoked to be able to do with living his life and shred every day.

What skiers have you looked up to?

Even as a younger kid I always looked up to Sean Pettit. He freestyle in the backcountry is so rad along with some of his bigger mountain riding, no one has ever ridden mountains like him. In recent days Tanner has made such an awesome comeback in the mountains. I really look up to the way he shreds and how much content he has coming out and his high energy. It’s inspiring to see what he does.

Recently I've just been inspired by anyone who follows their dreams and works hard. I’ve always just looked up to people who worked hard. I never try to surround myself with negativity and the people I’ve been around the past few years have been incredible. No matter if it’s business or skiing, or mountain biking, or anything at life all of it has been an inspiration.