The Far Out Ones: Jeremy Jones

Jeremy Jones is a man who needs little introduction. His professional snowboarding career spans decades. His list of snowboarding first descents is easily the longest. His vision peers beyond next season and into winter for generations with the Protect Our Winters organization. He’s ushered alpinism and mountaineering into the snowboarding world. But while sitting at the forefront he’s always remained true to snowboarding. Jeremy is no stranger to far off places. He’s explored obscure mountains in the Himalayas, Alaska and even close to home in California’s Sierra Nevada. This year, Jeremy joined snowboarders Robin Van Gyn and Mark Carter on an adventure in Montana’s Crazy Mountains. Little was known about riding here, but the spring camp out revealed plenty. A few days into the trip, the crew was walloped with a storm that brought perfect powder conditions that soon turned into a highlight of the trip. Jeremy has become an expert on winter camp outs and foot-driven missions. Fresh off a self-supported ten-day trip in the Sierra, the Crazies were plush, with a longtime friend as a personal chef and no shortage of food or drink. Nine days in the range brought everything from powerful storms to skin-searing spring days, snaky couloirs to massive steep faces. Here’s Jeremy’s take on the matter, and check out the action in Far Out, Presented by REI.

What does the phrase ‘far out’ mean to you?

It has a couple meanings to me. One is a mindset of just thinking far out, a real open mind or different perspective on life. And then there’s the far out like getting literally far out in the mountains, which I like to do.

Do you think it’s getting increasingly harder to get far out?

I do not think it’s getting increasing harder to get far out, specifically speaking for the snow term. There’s no question the front country is seeing way more traffic. Yeah we’ve kind of lost that ‘I can park my car and hike two hours and ride pristine powder straight back to my car a week after a storm.’ That easy, low-hanging fruit is gone. But if you’re willing to go out for a full day in the mountains you can pretty quickly get away from people and tracks. And then if you’re willing to spend a night or two in the mountains you’re really getting away from tracks and people.

How did the Crazy Mountains trip come to fruition?

Well originally it was two-fold. Mark Carter, who has been exploring all these obscure ranges that I’d heard of but hadn’t really heard of people being there, was fired up to do a mission together. I’ve also looked at a great book called Select Peaks of Greater Yellowstone and it’s really opened my eyes. There are like twelve mountain ranges in that book and it really shines light on how much stuff is out there in Montana and Wyoming. So I’m like never heard of it, sounds cool, I’m down. And as we started digging into that trip there were some permit issue and things of that nature, but I’d heard Montana had been having a great winter, too. The Crazies had been in the back of my mind since I drove by them one summer when my brother got married. They just looked white and stacked. 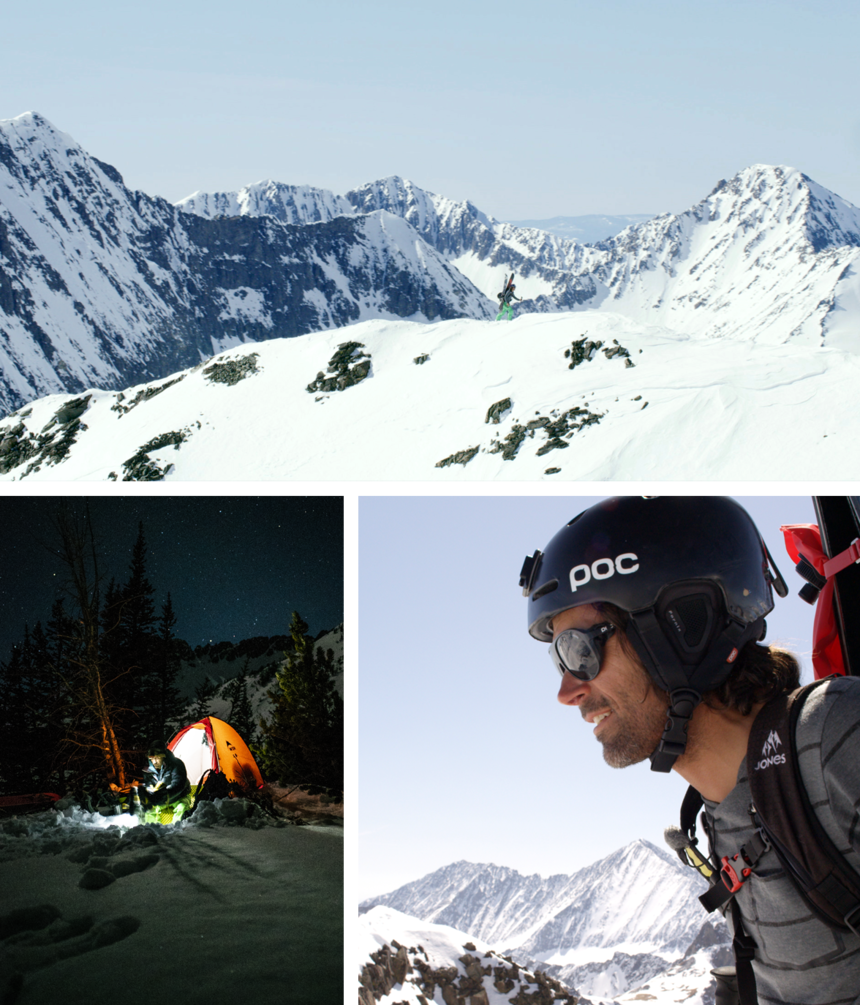 After countless years spent in the mountains honing his craft, Jeremy Jones has become synonymous with epic foot powered missions.

Tell me what you learned about private land use in Montana on this trip.

It was really eye-opening to look at the biggest mountain in the range and be told we can’t go there because someone owns it and we didn’t get permission.

That’s just bullshit to me.

The thought of the über rich owning mountain ranges and not doing anything with them and blocking people from getting to them and deep wilderness does not sit well with me. I respect if someone has a house in the woods or a ranch or whatever and those boundaries of one’s personal house, but as far as deep wilderness and high peaks that no one ever goes to where they are monitoring tracks to them seems really sad. I mean I have a gateway that connects my property with the other neighborhood. I took the fence down so people could use it for mountain biking or hiking or whatever. Otherwise they have to ride around on this super crowded road. It’s a hundred feet from my house. Then there are people that are blocking access to vast mountains and are worried about people who are going to have a wilderness experience. I mean how greedy is that?

How was the terrain and topography of The Crazies unique?

Ninety-percent of my snowboarding has been in the high sierra, which is this super vast place. It’s been a solid ten years of exploring there and I’m still going to major drainages for the first time.

So in that context The Crazies are this small, stacked, square range.

But what stands out with them is how tightly stacked they were, we could move through them pretty quickly and get on some pretty big peaks and aspects. In the Sierras you’re lucky to climb a peak in a day.

This being your only journey for the film, did it make you push harder or seek more lines?

I go out and just do the snowboarding I want to do. There’s logistics of cameras, but at the heart of it I’m a snowboarder that wants to go ride a bunch of fun stuff. What I did on this trip I would have approached it the same with or without cameras. That’s the approach I’ve always taken with filming. 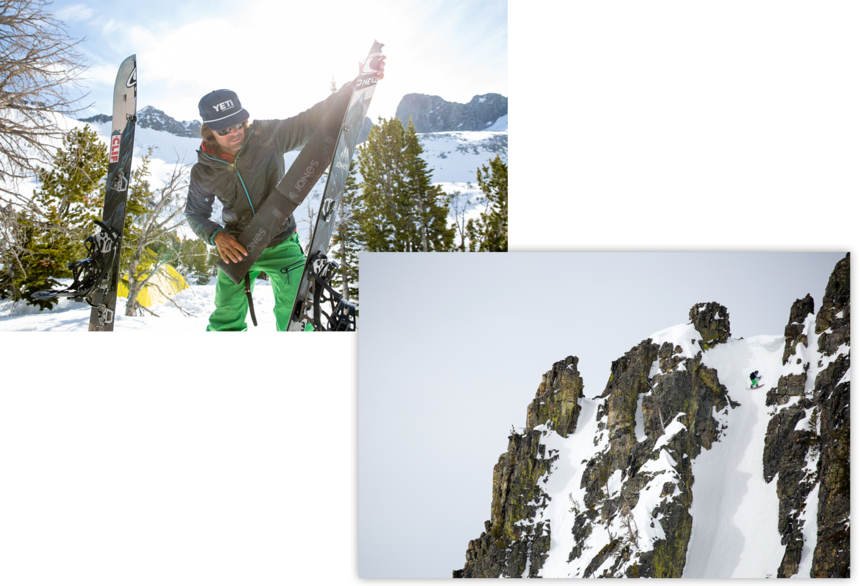 Last year the Crazies had a record breaking amount of snowfall, which was one of the main catalysts for venturing into the zone.  Ben Gavelda photos.

What did you learn from this trip, and from this past season?

Well, my snowboarding is really based around riding new things. I’ve had my head down trying to figure out these blank spots on the map in the Sierra, and it was cool to go to a new mountain range with that same approach I have at home and just see how effective it is. The fact that you can tour and tent high up in the mountains and be comfortable enough to stay out for days allows for some really amazing snowboarding. This focus that I’ve had is really working and I’m finding it travels well to other ranges.

The dream to go into a range that I’d only seen from a distance and get epic riding was the highlight of the winter.

It left me feeling like it’s time to take this approach to different ranges across the west.

What are the crucial things you’ve learned from snowcamping over the years?

Figuring out exactly what you need and what you don’t need in terms of gear. And the key to it all is you have to be well fed and be able to sleep through the night. Being warm and comfortable at night so you can get a good night sleep is huge, and you can’t be starving out there either. If you can do these two things you can wake up every day feeling pretty fresh and ready to charge and repeat day after day after day. 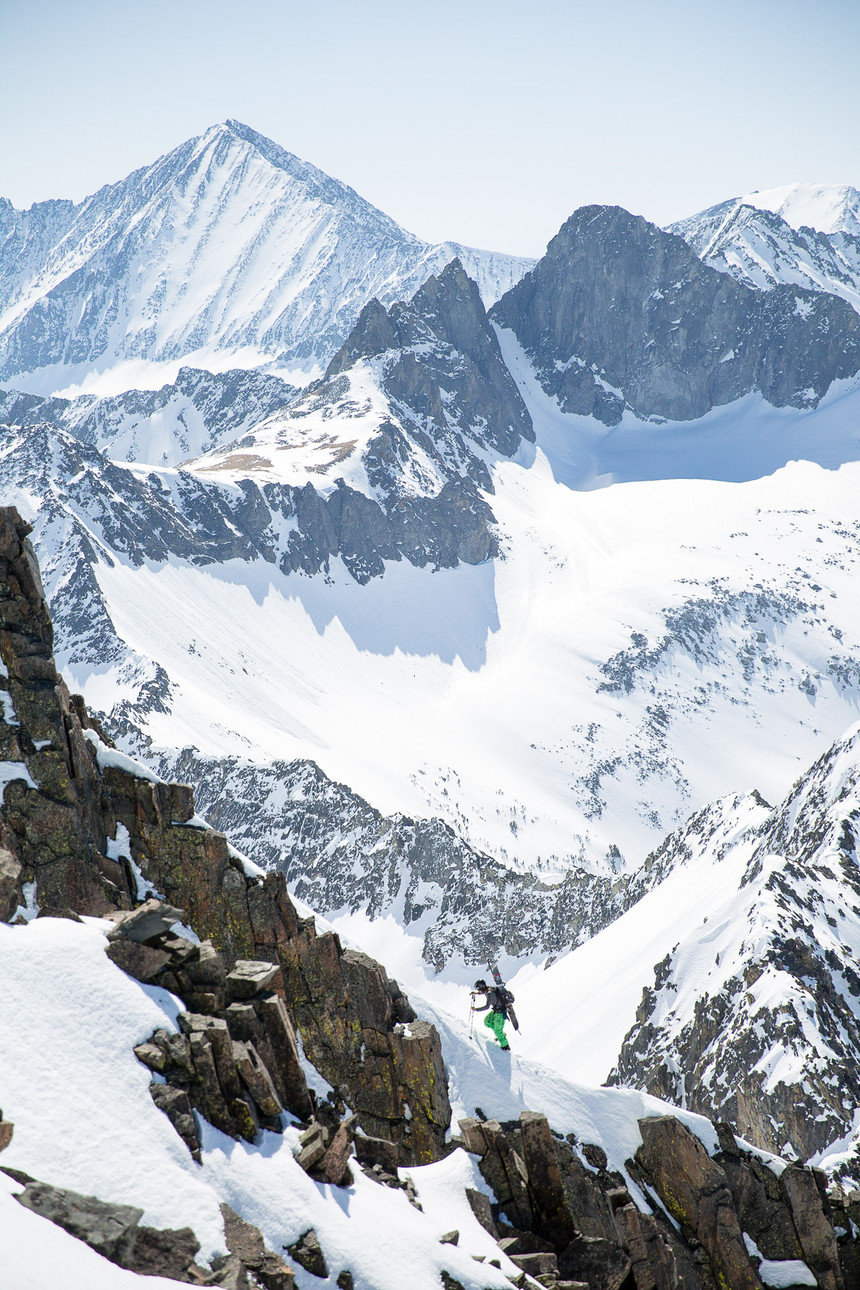 Why is spring riding the Super Bowl for you?

The spring is what I consider the “super bowl” because it’s when the days are longer, you’re generally dealing with a simpler snowpack, and trying to catch these spring squalls of 10-12 inches of snow so it’s a way safer scenario. It’s a time to get deeper into these mountains and get on bigger faces. To do that in December, January or February the snowpack is so complex and so dangerous that I don’t really look at big lines at that time of year. Occasionally you get an incredible snow cycle where some things can happen. But the only way to get all-day strong, like dark-to-dark strong, is through all winter of putting in long days. Come spring legs are strong, days are long and there’s simpler snowpack.

What’s it like being in a film with your nephew?

It surreal and it’s awesome. It’s really cool watching this next generation, whether it’s my kids or my brother’s kids, come up and it’s been pretty natural. In terms of Kai we knew really early that this kid had a special love for skiing. Obviously he’s a great athlete, but at the heart of it is this love for skiing. Every year I spend Christmas break with my brothers and their families so I’ve been with Kai ever since he first got on snow and have watched him progress. It’s been a real natural progression. Its been wild to watch, but also really natural. The hype is real, the kid is gifted and he’s driven and committed to it. I'm saying what was more bizarre was being in an avalanche class with him. He read all the books and was really on point with all that stuff. It’s really happening and I see it with my kids.

It’s gone quickly from just taking the kids to the mountain to them becoming my riding partners.