This BMX racer turned mountain biker podiumed at every stop of her first full Crankworx tour. Learn how Kialani Hines is quickly becoming a force in the bike world.

Local Kiwis are arriving 30 minutes prior to the start of the Crankworx Pump Track event to secure a coveted spot to watch. As they spread out on to the hills, athletes are rapidly taking their practice runs through the course. The sun is dipping below the horizon, which cues the illumination of the giant floodlights above us. There’s a buzz in the air—particularly for the female racers.

Jill Kintner - the four-time Queen of Crankworx - is not here tonight. Kintner cherished Pump Track and consistently won the gold medal time after time. Now that the queen has stepped away to pursue EWS, it’s causing quite a stir. Tonight is anyone’s game. As I wait in the media pit alongside the course, I’m passed by one racer who’s vying to fill that void: Kialani Hines. I catch her eye as she’s pushing her bike back to the start gate. She flashes me a smile as I wish her good luck. If she is nervous, she does a good job of hiding it. 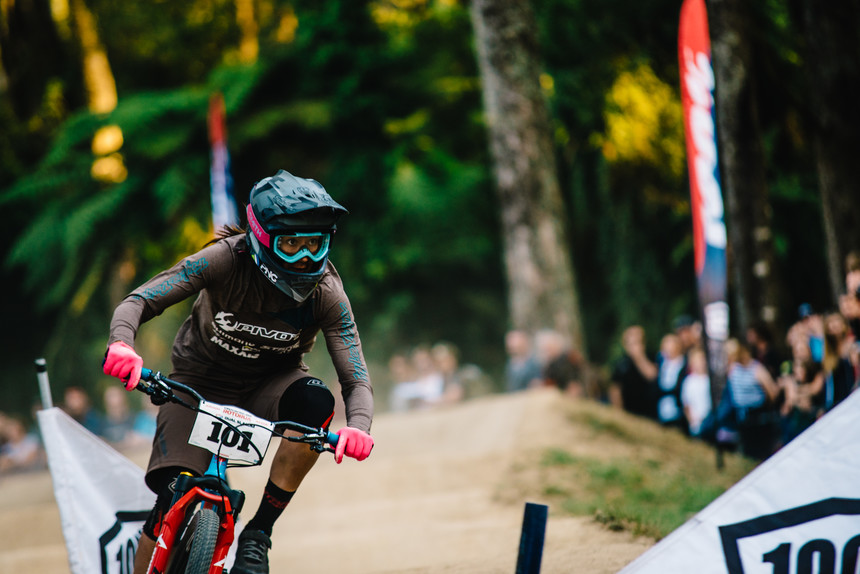 Kialani keeps her eyes focused on the next gate at the Dual Slalom event in Rotorua. Katie Lozancich Photo.

That’s because out of all the events she’s competing in this week, Pump Track is Hines’ favorite. “It’s where I’m comfortable,” she told me the day before with a big smile that lit up her bright brown eyes. Kialani is a stereotypical Crankworx athlete with an atypical path to the tour. She’s a multi-threat who’s only been competing at the bike festival for the past three years. A BMX racer turned mountain biker, the 21-year-old caught everyone’s attention at Whistler Crankworx in 2017. She appeared out of nowhere and was nipping at the heels of seasoned veterans and Olympians like Caroline Buchanan and Kintner. The next year, her first full Crankworx tour, she stood on top of a podium at every event she competed in.

This year in Rotorua she has Dual Slalom, Air DH, and Pump Track on her list. When she’s not racing at Crankworx, Kialani is competing on the pro GRT tour. She can’t help but grit her teeth at the thought of being absent from New Zealand’s downhill track—which looks like a fun time. But succeeding at Crankworx requires a certain degree of strategy, and Kialani wanted nothing to compromise her performance on the pump track. Last year Kintner nabbed the win from her by a margin of 0.38 seconds. Now that the reigning Queen of Crankworx is absent, the pressure has increased tenfold. With Vaea Verbeeck, Tahnee Seagrave, Shania Rawson, and more joining her on the starting mound, there’s no room for error. Everyone is hungry to win tonight.

A Decade of BMX

Kialani was a stubborn kid growing up. When her brother started racing BMX, her parents thought it would be a good idea to have her try as well. She said no and remained adamant. They had to resort to motivating her with an eight-year old’s kryptonite: a Happy Meal. “My mom took advantage of my love of food,” she said with a laugh. The bribe did its job and Kialani was soon scooting around on two wheels.

BMX became her life over the next decade. She dabbled in volleyball and baseball prior to cycling but was ultimately hooked by the individual sport on two wheels. Her excitement showed in her riding.

By the age of 17, she was frequently competing at national competitions—22 in that year alone. But it started to take its toll. BMX requires tenacity, and after 10 years of intense training, traveling, and competing, Kialani could feel herself becoming restless. Questions of whether to continue on bounced around her head as she headed to Grands that year. A lot of her friends were out racing in the woods on big bikes, and it looked pretty enticing. “It’s hard not to like mountain biking once you do it—I was hooked right away,” she said.

Still, she wanted to finish the season strong. But things snapped—specifically, her collarbone - into two pieces. A nasty crash at Grands would do more than prematurely end her season, it solidified her gut feeling. She put her BMX bike into storage, and a downhill bike took its place.

Taking the Big Bike Out 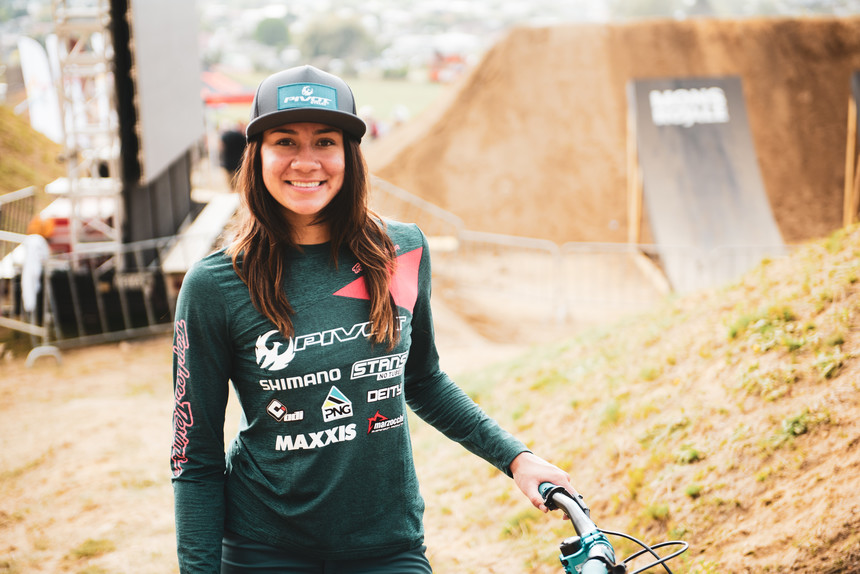 "If I ever come to a point where I am not enjoying racing anymore, or feel I could be doing more. I will walk away happy, knowing I did what I wanted to do and no one stopped me," she wrote on Instagram. Katie Lozancich Photo.

While Kialani’s journey into mountain biking was not clear cut, she’s had no problem keeping pace. Instead of easing into the discipline, she dove in head first. Her background in BMX, while different from gravity racing, wasn’t a hindrance. In fact, it taught her important bike-handling skills that transferred seamlessly into mountain biking. Plus, she had plenty of role models to look to during this change. Many successful mountain bikers—from Jill Kintner to Darren Berrecloth—were once BMXers who transitioned.

“It’s not like I didn’t know how to ride a bike, but mountain biking is really different,” she said, and I’m still learning day by day.

Everything about mountain biking was a breath of fresh air. She began her career with the local Northwest Cup series and ProGRTs. She quickly got a real taste of all aspects of the sport—even the less forgiving parts. At the Mammoth Nationals, she clipped a tree and snapped her tib-fib on her right leg, an automatic three months off the bike. After a period of rest to let it heal, the x-ray at her final checkup showed a gap in what was supposed to be a fully healed bone. It added another three months of recovery. Despite being unable to race for half a year, Kialani picked up where she left off. Once fully healed she decided to expand past downhill. She’d been watching Kintner over the years race in Crankworx’s Pump Track event. It looked so fun that in 2017 she gave it a try. The taste was enough to convince her to do the full Crankworx tour in 2018: Rotorua, Les Gets, Innsbruck, and Whistler.

“Last year, Rotorua was my first time abroad,” she said. It was a whirlwind and a huge step in her career. And to make the experience even more memorable, she returned home with some special souvenirs: two silver medals. “I almost missed the podium because I was telling my mom about it,” she reflected fondly. After that event she kept gracing the podium stop after stop. In Europe, she nabbed bronze and silver medals, before ending the season with a bronze at Whistler—pulling it off with a cracked rib.

Learning One Day at a Time 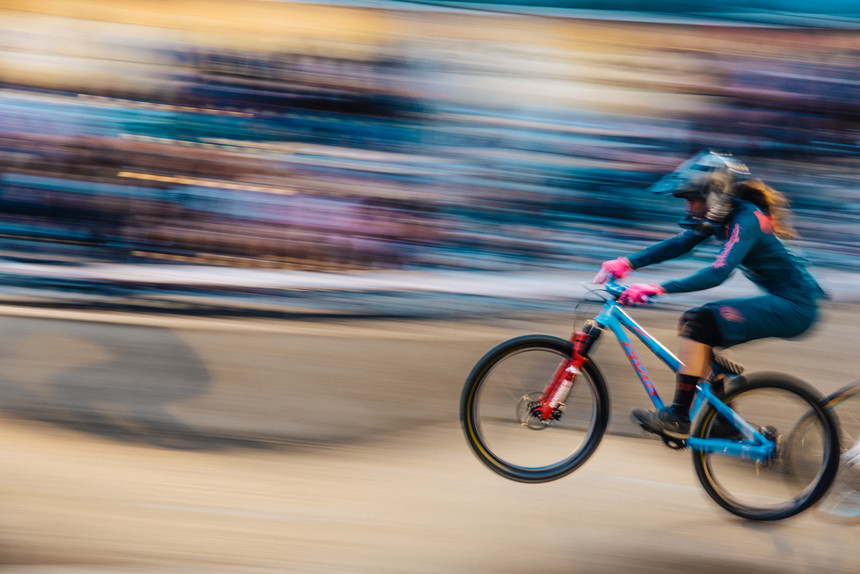 Look closely and you'll notice no chain—Kialani is completely generating her own speed. Katie Lozancich Photo.

Shiny hardware aside, these achievements encouraged her to make racing a full-time commitment. “I watched Caroline and JIll compete in BMX in the Olympics when I was younger, so just to be on the gate with these women gave me a lot of confidence. That validated my feelings of wanting to pursue [racing],” she said. Breaking into Crankworx pushed her in the best way possible. It diversified her skill set and caught the attention of the rest of the community.

“I have been so impressed with Lani's dedication. She really pushed herself this offseason with more endurance rides, gate practice, DH laps, and improving her recovery through a healthier diet,” fellow rider Rachel Strait says.

Strait, an EWS racer and staple on the Crankworx tour, admired Kialani’s effortless style at a private pump track event in 2017. While Kialani is a focused and dedicated athlete, she doesn’t let that become a barrier between her and the women she races with. Now they train together when Kialani is down in California chasing warmer weather. Both women come from completely different backgrounds—Strait is a former cross country racer—but they both enjoy learning from each other’s unique skills.

“I have been so impressed with Lani's dedication." - Rachel Strait

Now that Kialani has established her rhythm, she doesn’t want to lose it. When she’s not racing she’s at home in Seattle, Washington working for her parents. It’s how she facilitates her mountain biking career - and it takes some serious balance. Travel, training, and competing are time-consuming—and by no means cheap. In the end though, she thinks it’s all worth it. “[Biking] is just what I know and what I’m comfortable with. Right now I’m in this zone where I don’t see anything else.” Her goal is to be a contender for the coveted Queen of Crankworx, which isn’t too far fetched considering her rapid success.

More than a Bridesmaid

In other Crankworx races, the margin between athletes can be boiled down to seconds. Tonight at the pump track event in Rotorua, winning and losing hangs on tenths to hundredths of a second. It’s down to local Kiwi Shania Rawson and Kialani in the final. Throughout the whole night, Kialani has been riding smoothly, consistently winning the eight rounds leading to the final. Still, that’s no reason to back off. Rawson, who also has 12 years of BMX racing under her belt, can easily give her a run for her money.

Round one of the finals is about to commence. They’re up on their bikes. It’s silent. Then the gates drop with a thud and pitch of the buzzer. Rawson rushes ahead, but Kialani doesn’t let her keep the lead for long. She’s able to pull ahead and win the first round of two.

Earlier in the evening, broadcaster Micayla Gatto asked Kialani about the toughest aspect of the course. “It’s kind of obvious—that big roll over,” she said still catching her breath from the heat. It’s a burly course design that’s kept everyone on their toes. But now one run stands between her and her first gold medal on the Crankworx tour. She’s been a bridesmaid for the last year.

After a few men’s heats, Kialani and Rawson are back in the starting gates. When they’re given the cue, it’s neck and neck. Flying through the turns, it’s impossible to discern a leader until the last big berm. Kialani is pulling ahead, and Rawson can’t catch her. When she crosses the finish line, she’s done it—she’s no longer the bridesmaid but tonight’s champion. Her usually quiet and calculated demeanor is replaced with a beaming smile. Her excitement is on full display as she pumps her hands into the air in celebration. When Gatto reconvenes with her for a post-event interview, Kialani is still trembling with joy.

“I just tell myself to ride smooth, not fast,” she says. Kialani’s victory will resonate with her beyond tonight because it means more than cracking the podium. It shows that through the combination of passion and determination, a newcomer like herself has a place with the pros.

It wouldn't be a proper victory without champagne