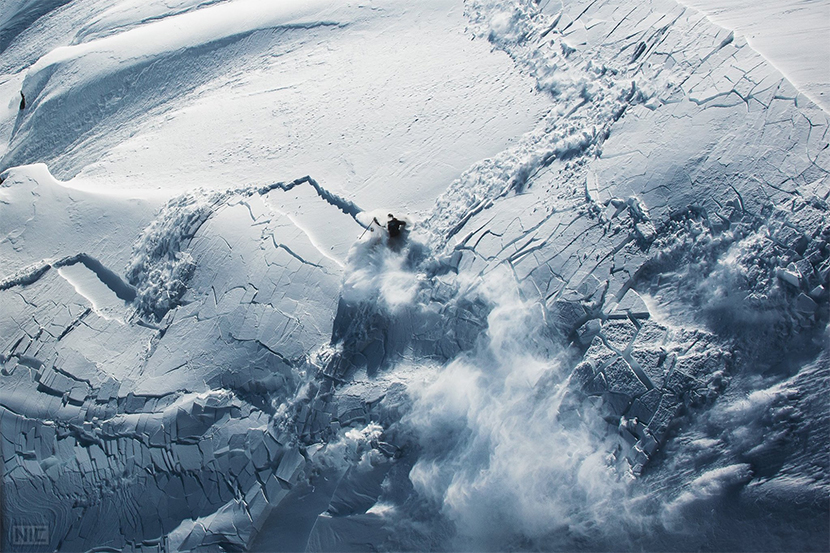 Shooting cracks, blocks breaking off beneath your skis, loud noises coming from the snowpack: these are all signs of instability and a really good reason to get off a slope immediately.

In Spring 2016, Nick McNutt was filming in Alaska for TGR’s Tight Loose with fellow skiers, Angel and John Collinson, and Sammy Luebke, when he was caught in a large avalanche while skiing his line. McNutt came out of the avalanche uninjured and ok, but he was very lucky. Below is a recap of the day with a focus on what went wrong and what everybody in the group could have done differently. It is meant so that others might learn from it so please be respectful as you read and assess this event.

It was a sunny, cold, morning in Alaska and Nick McNutt was the last skier to pick his line. He and a crew of skiers and filmers had been in AK for a few weeks stacking shots for Teton Gravity Research’s film, Tight Loose. The crew’s guide, Kent Scheler, had performed a stability test on a similar slope and aspect earlier in the morning and the snowpack had appeared stable. As McNutt looked up at the wall of potential ski lines, he chose one he thought would be interesting—a steep face far away from the rest of the tracks on the mountain that led into some spines and cliffs. He told Scheler where he was headed, Scheler told him to go ahead with his line selection, and McNutt got into the helicopter and went to the top. 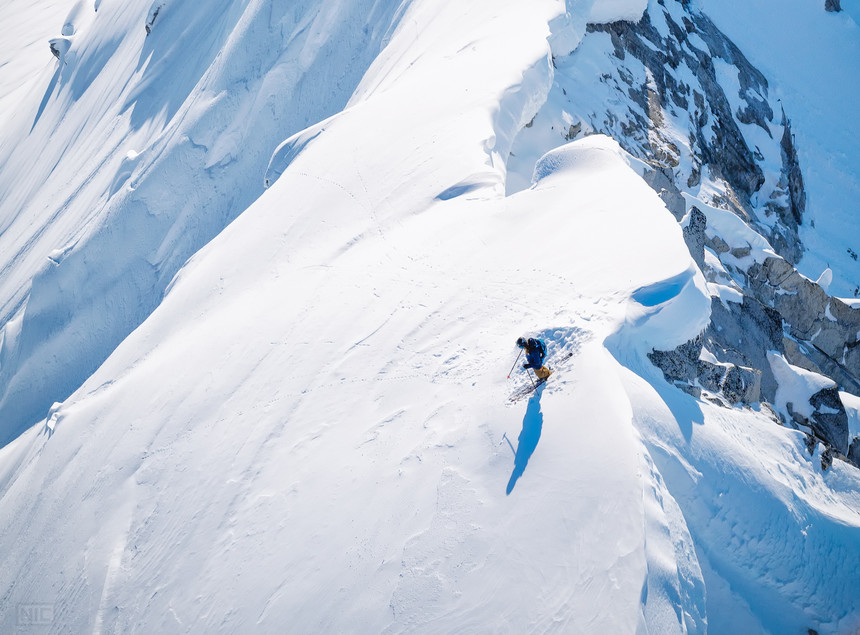 Angel Collinson and Sammy Luebke were the first to drop in and they both skied without incident. McNutt was next. Checking out his line for the first time from above, he could now see that part of the slope he planned to ski looked wind affected. He performed a ski cut before dropping in and nothing moved so he began to ski down. He made three flowing and fast turns before the slope cracked above him, turning into what looked like a sheet of shattered glass. McNutt was caught in a hard wind slab which started funneling him down the face. Almost immediately it carried him over the side of a cliff where he landed and continued to tumble down. He was wearing an airbag but his hands were stuck in his pole straps making it impossible for him to reach the handle. After the longest 30 seconds of his life, the avalanche settled and McNutt stopped.

“I thought I was getting buried while it was happening,” McNutt says. “I was cartwheeling and every time my head would come back up I would get taken over by another wave of snow. And it felt like I was getting pushed deeper and deeper into the snow. Both my skis came off so I was able to swim to kind of get to the surface. I had my pole straps on and I was trying to get rid of the poles to get to the ABS handle on my avalanche pack but by the time I got to the handle and was about to pull the bag it was kind of over. It just ended.” Amazingly, McNutt wasn’t hurt and was buried only up to his knees. 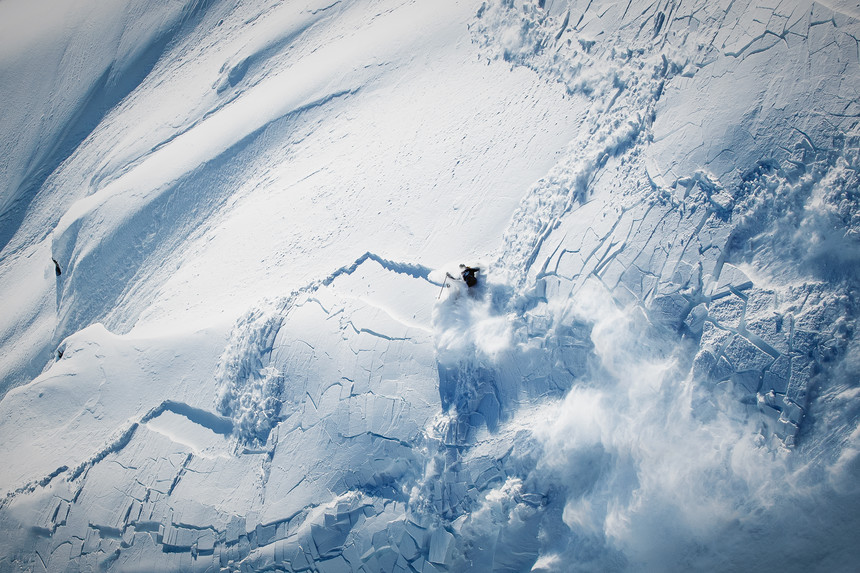 A helicopter came in to pick him up because his skis were nowhere to be found. John Collinson skied his line and then the group pow-wowed to talk about what happened. They agreed that the snow was not as stable as they had thought on the face they wanted to ski. Scheler said he had misinterpreted where the crew was planning on going and McNutt admitted that he rushed the process of communication. In fact, the whole team acknowledged they had been rushing a little bit because they were on a tight schedule before they had to go back to camp for the afternoon. “When I chose my line I basically picked something that was away from the other skier’s tracks that I thought could have been cool,” McNutt says. “The general feature I was going to was pretty obvious but the way in was maybe less ideal than the guide would have liked. And it was just a matter of, me again, maybe a little bit of rushing, and not paying close enough attention to a pretty obvious red flag.”

I went back to square one 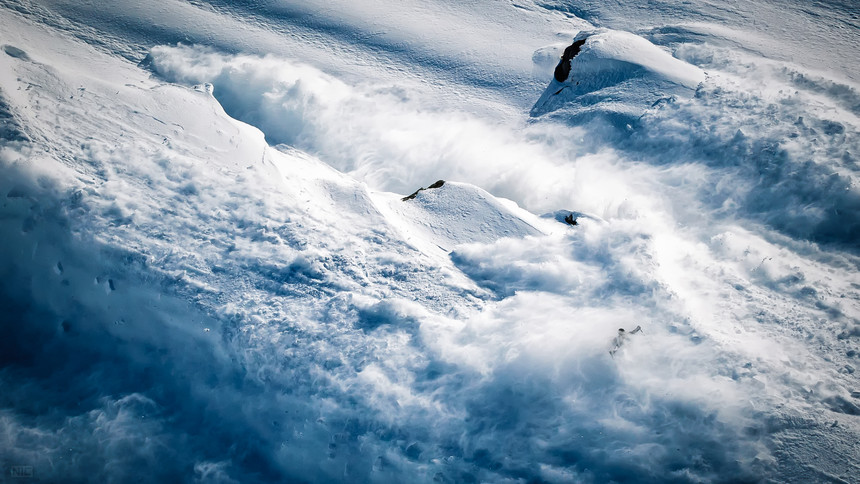 The crew then flew back to basecamp for lunch. McNutt grabbed a different pair of skis for the evening session but reeled in the charging mentality. “I went back to square one as far as confidence.”

McNutt and the rest of the crew would be the first ones to say they made mistakes that day. McNutt noticed that he was rushing and wasn’t taking the wind-affected slope serious enough. He learned how important it is to slow down and more accurately communicate where he plans to ski with his guide. He also learned that when he notices something wrong, like a wind-loaded slope, he should listen to his gut rather than say, “Well nobody else has said anything about this yet so it must be fine.” The team learned that McNutt should have picked a plan B line from the ground so there would be no pressure to back out at the top of his first choice. And that even though a pit might not show any obvious instability, that doesn’t account for isolated things like wind slabs. 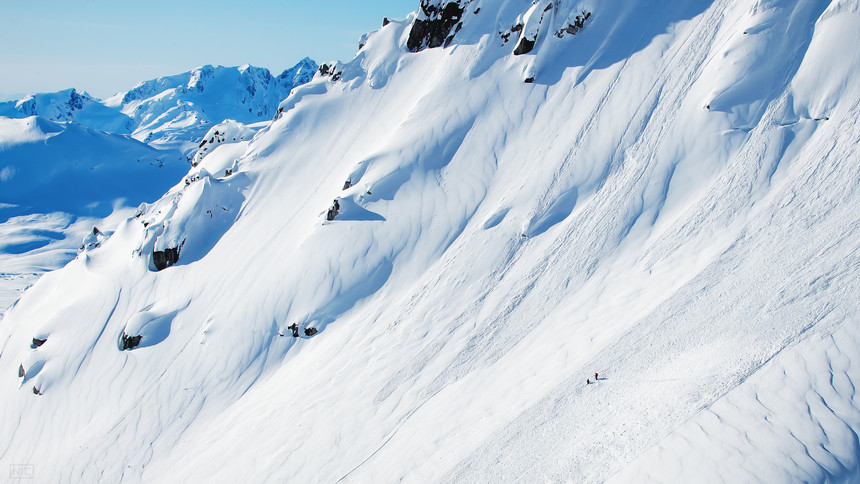 In retrospect, all of these signs seem obvious. A wind loaded slope, right out there in the open for everyone—the athletes, the camera operators, and the guides—to see. It’s easy for us to sit back on our high horses and rap off a bunch of reasons why McNutt shouldn’t have dropped in. But in the moment so much is going on, especially when somebody’s entire career relies on how fast and well they can perform on these lines, that it is easy to rush and overlook things. McNutt wasn’t the only one out there that day, he had a whole crew of professionals there with him and nobody said anything. And that could be the biggest takeaway of all.