The Far Out Ones: Cam Riley

A cornerstone of the legendary Stept Productions crew, Cam Riley has made a career of seeing what other skiers don’t even notice. As a young buck, the street savant and visionary filmmaker cut his teeth in the Northeast, first getting on a pair of skis well before he’d graduated from kindergarten. Equipped with a handicam and a taste for going fast, as a preteen Riley started filming his skating, biking and skiing exploits and quickly caught the artistic bug. Those grainy home videos eventually led to him establishing Stept Studios with his childhood friends Clayton Vila and Sean Jordan — the same trio behind 2015’s award-winning street-skiing documentary, for lack of better. Riley is the kind of skier who will jump off just about anything, whether a massive handrail or a five-story parking garage in the middle of a Boston snowstorm. Putting together segments like this year after year takes a lot more than just guts, it takes a keen eye in a busy urban environment, which has led him to cities all over the country. So, when it came time to send crew to one of the roughest of Russian backwaters to film an urban segment, Cam and the boys were the first ones on TGR’s shortlist. For a taste of just how strange and out there a street session can get, be sure to check out Riley’s segment in TGR’s Far Out, presented by REI.

Tell us about your early life. Where did you learn to ski?

I grew up in Massachusetts in the Boston area. So early on, I was mostly skiing New England, Vermont, Maine and New Hampshire — various ski areas around there — mainly Loon and Waterville. My folks taught me to ski at a pretty young age. They had me on snow when I was three or four years old. I showed a lot of natural talent, so eventually I became involved with some of the progression programs at those places; a lot of park, cruising around, doing contests.

I had a little handicam and I loved to film skateboarding, biking and all different kinds of stuff, and skiing was just one of those activities. So, around 14, while that was all going on, I was honing my craft and learning how to make movies with a few of my buddies that I now have a production company with: Stept Studios. That slowly turned into making a ski film every year. From there, my focus gradually shifted toward that. 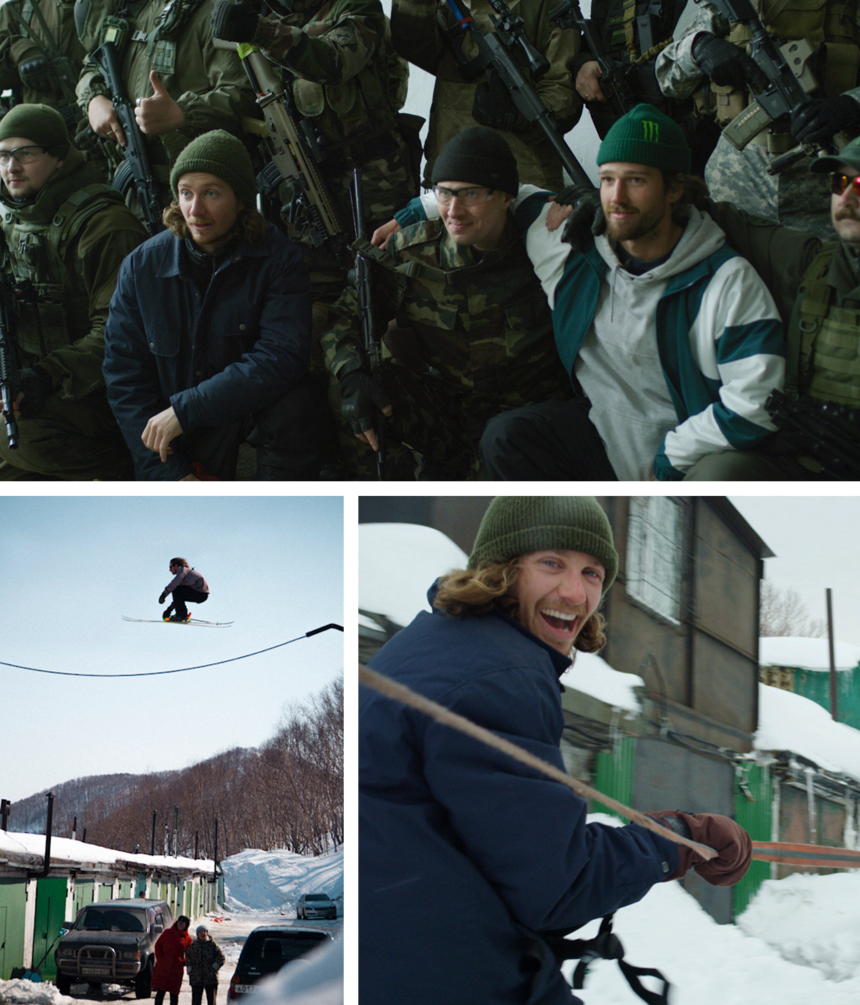 The bold street skier has a knack for interpreting an urban environment into incredible street ski segments.

You, Sean and Clayton all put the hammer down in Far Out this year. You guys — as the Stept crew — also made for lack of better. What was filming that project like?

It was an interesting phase in our careers. A lot of our surrounding crew had left the game due to injury or moving on to different stuff, so it was kinda just the three of us left in it at that point.

We decided we wanted to go out and do something a little bit different — something that hadn’t been done before.

We wanted to give a little more insight into the creative process behind what we do and explain to a broader community what goes into making an urban ski film. 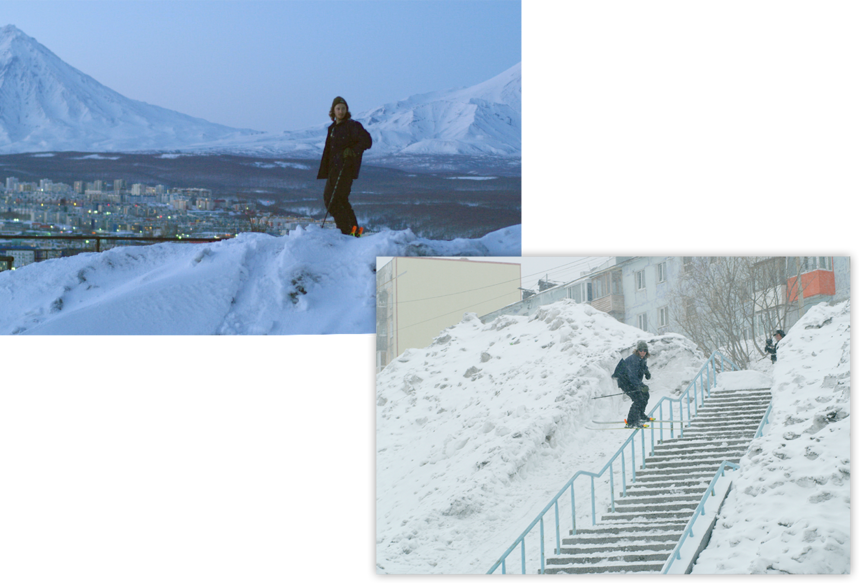 Through the combination of filmmaking and skiing, Cam has gotten to where he is today.

It was definitely a whirlwind before that. Everyone was just going as hard as they could and it was pretty crazy. A lot of our friends couldn’t do it anymore because of knee injuries, so at that point we came up with the idea to tell the story of why we’re so into [urban skiing]. In the process, we actually stepped back and asked ourselves why we were doing it and simply tried to translate that into the film.

What are your passions beside skiing? Reading, pog collecting, Pokemon Go?

To be honest, I actually don’t even get to ski that much anymore. This is probably going to be the first year that I don’t buy a season pass. I got one last year, but barely used it. At this point, I try to stay active anyway I can. I’ve got a couple motorcycles, I like riding dirt bikes and cruising around on the Harley. Just other ways to keep you moving fast!

But my biggest passion is filmmaking.

I make a lot of commercials and documentary films — it’s where my big focus is.

I like cameras and enjoy that side of things a lot, the technical aspect of filmmaking and cinematography.

How do you spend your last hour awake before going to bed?

What are your favorite travel destinations?

Another standout spot — I love Barcelona — that city is just fucking awesome! Go there with a skateboard and just cruise around all day. Those are some of the best times. The culture around there is pretty cool, you can see the skateboarding influence on it and it’s pretty widely accepted. It’s a lot different from a lot of places around here. But generally, I like to have an activity in mind when I travel — that makes it way more worth it for me.

Walk us through the trajectory of your career.

I started out passionate about skiing as a teenager around 13 or 14 years old. I fell in love with the sport and couldn’t get enough of it. I decided I needed to figure out a way to ski every day, or almost every day. And through that passion, combined with a camera, I developed my skills as a filmmaker.

Stept’s films started taking off, and before long we were making a feature every year. Pretty soon that turned into an actual career in filmmaking, and I’ve sort of transitioned from 70% skiing and 30% filming, to now more like 30% skiing and 70% filmmaking. It’s my livelihood at this point.

I make commercials. I make films. So yeah, no complaints. I don’t necessarily prefer being in front of or behind the lens — both have their advantages. It depends on the situation: I like filming people do things better than anyone else in the world, and I like getting filmed doing stuff if I think I can perform that activity at a high level.

It just depends on the situation, but I find a lot of enjoyment on both sides of the camera.

Tell us about filming Far Out?

Over the past few years, myself, Sean and Clayton have developed a relationship with the TGR crew, and we’ve been working with those guys for a long time. But the way it works with us now is Clayton and I — both being filmmakers in our own right — we try to work with TGR to come up with an idea each year to include as a segment. We create the idea, go direct it, and in the past we’ve sort of produced and whatnot, so it’s this collaborative effort that we have, and we’re kinda independent from the production of the rest of the film given that we’re the only people skiing street usually.

With a premise like in Far Out, it seemed like an awesome opportunity to go and ski somewhere strange, so, it was sort of a no-brainer for Todd and for us to come up with a location. So we started searching the globe for somewhere pretty out there, and we decided on Kamchatka. Up until that point, I didn't even realize that part of Russia existed.

What does your perfect day of skiing look like?

At this point, the most fun I have still — in a day, in general — is going and skiing park. Jumping, hitting rails and cruising fun park laps. I don’t do anything too crazy these days or push it too hard, but it’s so much fun to me. My body’s still relatively healthy, so I can be comfortable on my skis and it’s the most fun I can think of.

In terms of location, I lived out in Colorado for about eight years before moving to LA, and those parks out there are some of the best in the world. I love skiing at Keystone or Breck and just ripping park laps there. It’s a good crew around and it’s always a good time.