Guided by an unyielding passion for biking, this self-taught rider built his first downhill bike from junkyard parts. Now the guide/racer hopes to make Nepal known as a world-class biking destination.

A rusted stub of plumbing pipe, a coil spring from a scooter, two frames melted together all assembled with bolts, random parts and unrelenting drive. This is Nepalese professional mountain biker Rajesh “RJ Ripper” Magar’s first mountain bike, one he created when he was just a teenager. More remarkable than a bike crafted from junkyard parts is the way he rode it. Road gaps, doubles, berms and fast singletrack—RJ pushed this bike and himself to the limits. Powering it all was a magnetic draw towards biking, one that distracted him from school, studies and traditional work. That pull has panned out. The now professional rider, guide and mechanic supports his family through a life revolving around his passion.

Rajesh grew up in the small town of Lalitpur, on the outskirts of Kathmandu, Nepal, on the rim of the world’s biggest mountains. Poverty runs deep here, yet the human spirit flows deeper. Raised in a land where foot and hoof traffic are the primary means of transport, the flash of bikes quickly caught the young boy’s eye. But luxuries like these are not easy to come by. Rajesh was able to buy his first bike for $25—a fortune for a Nepalese child—but it quickly disappeared. His mom sold it for a mere $0.90 of scrap metal when she saw how riding impacted his schooling. Undeterred, he sought to build one all of his own. And he did. He honed his skills on that Franken-bike. Later, a chance encounter introduced him to H+I Adventures Operator and now mentor Mandil Pradhan, and RJ’s bike quest accelerated. With the help of Mandil, RJ went on to win three out of four national downhill titles—on proper bikes. He was named National Geographic’s’ Adventurer of the Year in 2018 and shoved to fame through Joey Schusler’s beautiful film RJ Ripper. 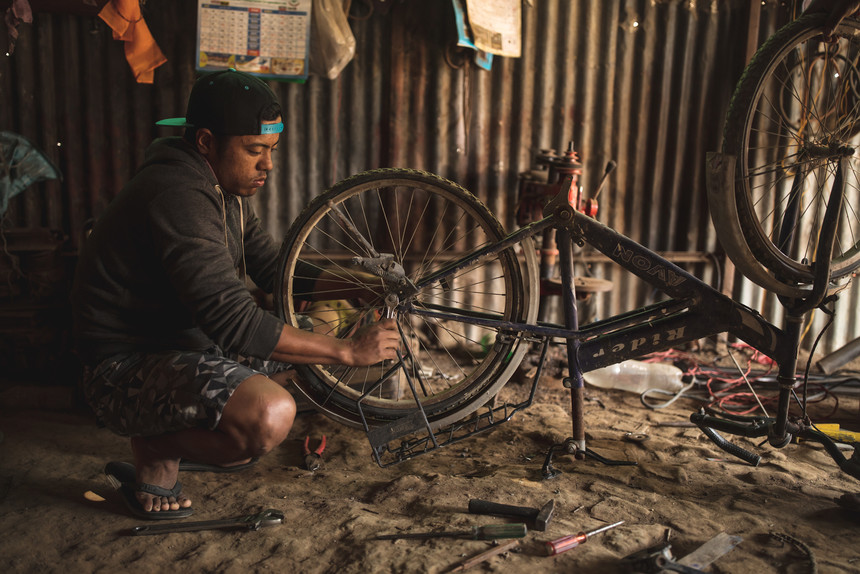 With a life that revolves around cycling, you can usually find RJ tinkering with some kind of bike Joey Schusler Photo.

Rajesh is young, yet he already has an incredible story to tell. His mountain biking career is in its infancy, and the riding in Nepal is just coming to light as he and friends continue to pioneer many of the routes here. RJ’s current focus is to expand from racing in Asia to the global stage of the Enduro World Series. He also wishes to make Nepal known to the world and expose its emerging mountain biking scene, rich with riders and trails. It’s morning in Kathmandu as RJ’s tale spills through Mandil’s translation from a scratchy speakerphone on my desk as the sun goes down in the Tetons. 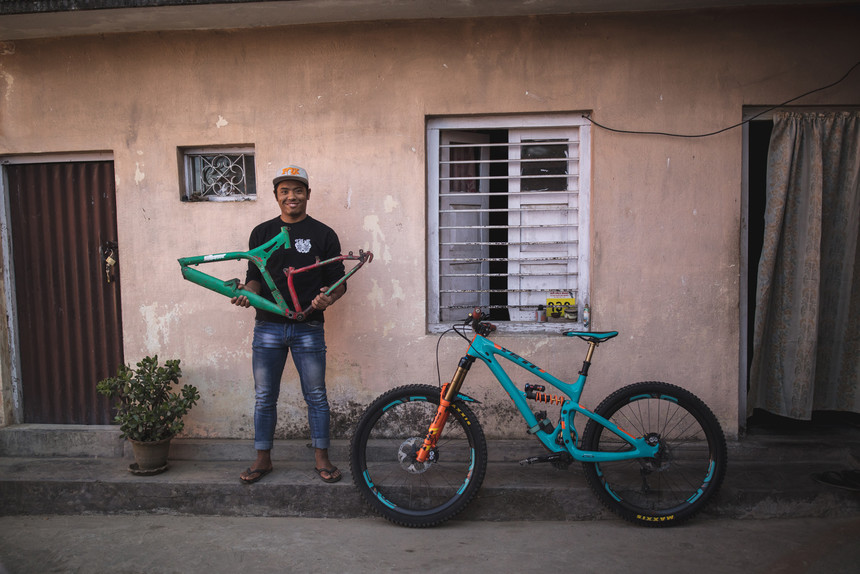 What attracted you to the bike?

RJ: I would see a lot of people riding the bike, just watching the wheels go. My mom was a housemaid and sometimes she would take me to work. One of the houses where she worked the boy who lived there had a bike and I saw that and dreamt of having one.

You have a pretty tragic tale of finally getting your first bike, then your mom selling it. Can you tell us about this story?

RJ: I did chores and lots of little jobs to save money for a long time. For a kid, $25 in Nepal is a lot of money. When I had $25 I bought a bike from a friend. It was a dream come true for me to have a bike to ride. But the culture, society and most parents here are very school-focused here, especially in the lower socioeconomic classes. I spent so much time on my bike that my neighbors and people would tell my mother that I was riding the bike too much and I was going to suffer in school and my future would be bad. My mom took my bike to the metal recycling and got $0.90 for it. I was super sad, I was devastated. It was the one thing that I could look forward to and I was just heartbroken when it was gone.

This led to something new. Tell me about creating your first homemade mountain bike?

RJ: After my mom sold my first bike all I did was go on YouTube and watch videos of people riding bikes after school. It made me really want a mountain bike. I was walking to school one day and walked past a scrap yard and saw a bunch of bicycle frames lying there. And that is when I thought I could buy one of these junkyard frames and then sort of make a bike. And at that point it wasn’t about performing like a mountain bike, it just really needed to look like one. And that is how I basically got the idea of making it.

Instead of paying attention in class I had daydreams about how I wanted to build this bike. I went to the junkyard and found motorcycle parts. I cut off the head tube and put on a motorcycle fork with some plumbing pipe. Then I cut two frames and made parts to fasten them together. There was a metal shop across the street from where I lived and I would hang out at there and help out. That is how I formed a relationship with the guys. They helped me and I also learned how to weld.

So you learned to engineer and weld by learning by watching and doing?

Mandil: The character that RJ is…he’s very good at engineering stuff. He’s able to reverse engineer bikes and forks and dropper posts. He has always been like that. So I guess he watches and learns and takes it apart and puts it back together.

I was wondering how he got so proficient at working on bikes.

Mandil: Yeah just reverse engineering. Also, he has broken a lot of stuff, which I guess is part of learning. But also just watching lots of YouTube videos. He spends hours just looking on YouTube….just watching and learning and doing it. Here in Nepal when you don’t have the ability to replace something that is broken, you have to fix it. There is no option to throw it away.

Where did you first start riding, RJ?

RJ: There was a bike at the house where my mom worked at and I tried to ride that bike and I fell straight away. When the owner of the house saw me falling they said ‘if I don’t know how to ride it then I shouldn’t’. So, I went back home and I borrowed my neighbor’s bike to learn how to ride it on my own. When I returned back to the house I would borrow that bike and ride it around the neighborhood. There were a lot of open fields and I would just play around in the field and jump on some dirt jumps and ride it around the streets and off bumps and things.

How did your riding progress into mountain biking and racing?

RJ: The area where I live is on the outskirts of Kathmandu and there are hills and trails all around. I would see mountain bikers go by. Once I built my bike I tried to go wherever these guys went, but I would stick to the main dirt roads and paths. One day one of my friends told me there was a mountain bike race nearby and we should go watch it. It was a downhill race and the guys were doing these jumps and berms. It got me really excited. So, I went back to that track and started riding it.

You grew up in a beautiful place surrounded by mountains. How did growing up in Nepal influence your riding?

RJ: Cycling is my way of transportation so I ride every day, about 30 miles a day commuting for work. A lot of the trails are not maintained for bikes, they are busy walking trails and they are full of surprises and can be very technical. I think this helps with instincts and reflexes because every time I ride them they are different. Riding more the natural trails we have here challenges me and when I go to a maintained trail it seems easier.

What makes the riding in Nepal unique?

RJ: You get to explore these amazing areas and ride through villages where the locals are so happy and very friendly because nobody ever passes through many of them. And obviously, they are in the backdrop of the world’s highest mountains. It’s a very special people and place. 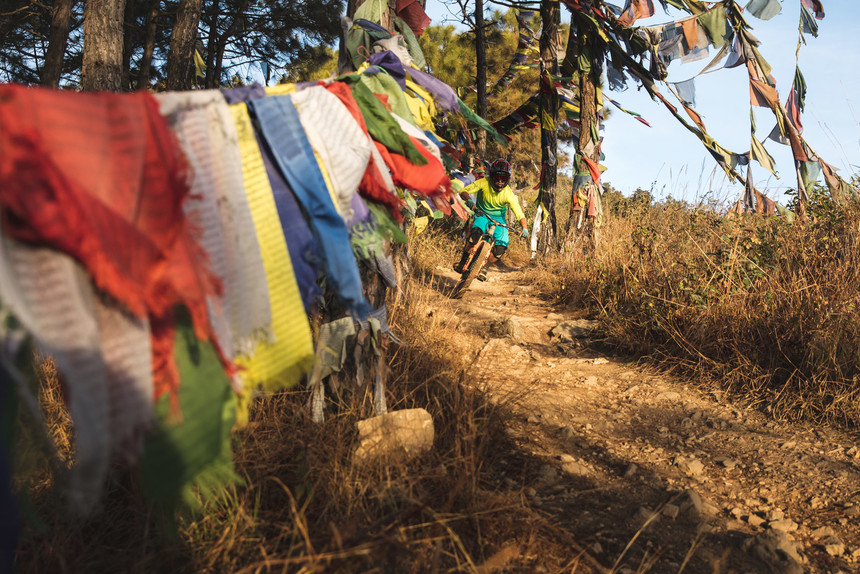 Mountain biking is still a young sport in Nepal—but it's got plenty of room to grow. Joey Schulser Photo.

How does mountain biking connect you to the landscape?

RJ: My love for the mountains came when I became a more serious mountain biker. Before that, I didn’t really know the importance or significance of these mountains. When you are in Kathmandu you aren’t really in the mountains, it is mostly hills. Growing up I was always told not to go these jungles and stuff because it is dangerous or whatever. So I grew up not going into the hills or into the forest. Now I love the mountains and I understand how lucky I am to live in a place like this. When I mountain bike and explore all of these amazing areas it is very satisfying to see all of these beautiful places where few have been. Exploring never ridden trails is a big part of what I am doing right now. It gives me a lot of satisfaction because my friends and I are some of the first people to ride them. So in that way it has had a tremendous amount of influence on me. Before I was riding, the landscape didn’t even matter to me.

You speak of mountain biking in such spiritual terms. Can you describe the feelings, thoughts, and emotions that riding a bike in the mountains gives you?

RJ: Mountain biking for me is related to my soul, I dream about it and when I wake up I see the bicycle in front of me, when I go to sleep the bicycle is next to me. On the bike, it’s a sort of meditation. I leave all of my issues or worries behind. It is a very freeing experience. I also feel really lucky that I can make a living riding mountain bikes. It is very rewarding for me. My life is all about mountain biking, whatever mountain biking has given me no other job would have given me. My bike is so close to my heart. 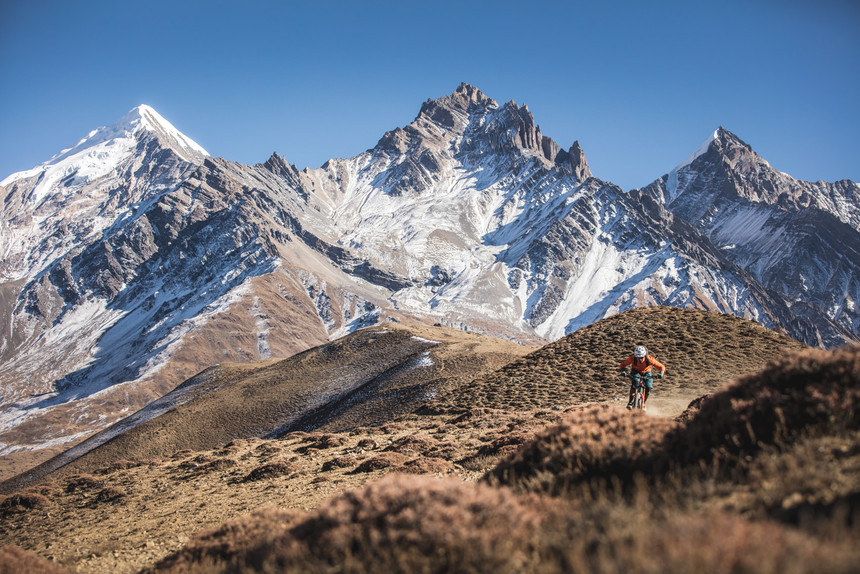 RJ hopes that by racing in the EWS he can show the world what Nepal has to offer. Joey Schusler Photo.