When many of the steps required for success happen out of the public eye, it sometimes makes it difficult for an artist's work to be recognized and their hard work validated. Jackson local Haley Badenhop has taken a long and winding path to receive the feedback she does now: strangers in coffee shops commenting on her murals, clients sending pleased photos of themselves posed in front of her commissions, strangers recognizing her and her artwork from all corners of the globe. This life of hers came together slowly, somewhat unexpectedly, as most good things in life tend to do, and she’s excited to continue pursuing the life plan that she laid out for herself at ten years old.

“I call it the Picasso moose,” he says as he brushes by me, wafting ribbons of coffee steam in his wake. The unnamed man just received an impromptu two-hour-long rundown of Haley Badenhop’s entire life path and the artistic journey that led to said moose mural’s creation in Jackson, Wyoming’s Town Square. “You’re getting a real art lesson today!” Badenhop jokes, scooching her bar stool out of his way.

A delicate ding as the man swings open the heavy wooden door to leave Cowboy Coffee.

The animal’s starry eyes float their gaze across the street at us. As the kind stranger alluded to, the mural is a dance of shapes and lines that eventually meander their way into a moose: buffalo running across the back, deer and elk prancing on the shoulder, a cougar coiling on the brow. If the subject matter full of mountains and wildlife represent Badenhop’s life now, then the wild lines bounding around the mural might represent her artistic journey until this point: never stopping for too long in one place, seemingly sporadic and yet always following one unifying impetus. That impetus began as her goal to pursue art and later combined with her unexpected love of mountain life.

Badenhop always knew she wanted to be an artist. "I would because I like to draw. I would have my studio. And when I got bored I would go somewhere and draw what I see. When I'd have enough pictures drawn I would sell them,” said Badenhop when she was child, now memorialized on her website. This drive to pursue all things art has steered many of her life decisions, making a younger her proud. She has her very own studio in her house. When she gets bored, she goes somewhere and draws what she sees. Now that she has enough paintings, she sells them, but to people all over the world. 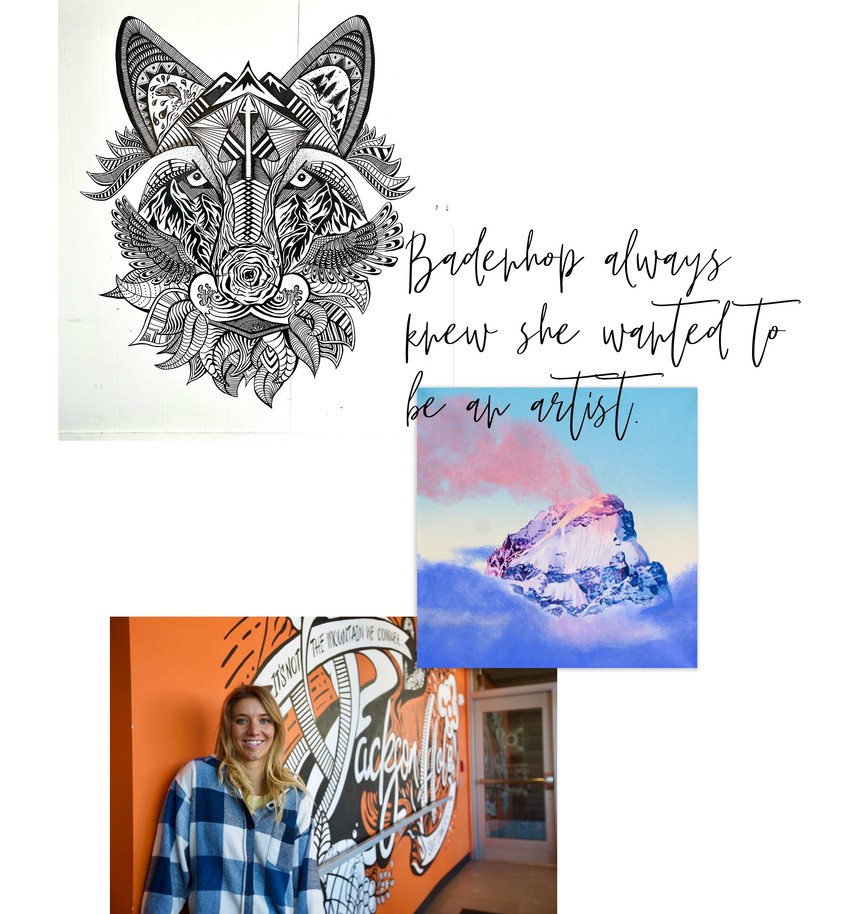 Art took her from fashion design school to an internship in California. Along the way, she ate a particularly delicious muffin in Vail, Colorado that would introduce her to all of the accolades of mountain town living, which she had yet to experience: endless active opportunities, a certain breed of people, and ceaseless inspiration to go somewhere and draw what she sees. She moved from a graphic design job in Vail to helping people with disabilities ski in Aspen to a job driving 15 to 20 international tourists around all the national parks for weeks at a time.

One stop was often in Grand Teton National Park, a place she had thus far only heard tales of. She recalls turning to her bus and announcing, “I think I’m going to move here.” She only planned to live here for a year, but as it goes with the black hole of Jackson, in Jackson she remains. 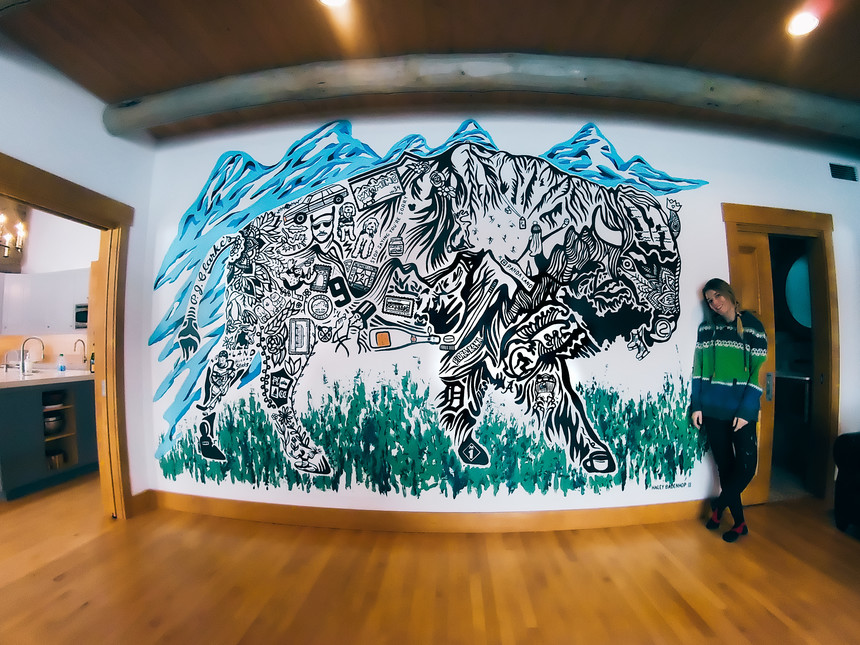 Now Jackson has become one of Badenhop's favorite sources of creative inspiration.

It was here that she fully developed into the wildly talented international muralist that we all know and love. You can see her art scattered around town: the wiley blue moose in town square, the red moose statue in Teton Village, and until very recently, an acrylics installation in the public library. Many people now enjoy her art all over the world as well. She has completed murals in Orangetheory Fitness Gyms in Shanghai, New York City, Jackson, and Mexico City, Tiffany & Co. in Shanghai, as well as countless private murals and commissioned works in private homes.

“Whenever I tell people I’m an artist, they ask what gallery I’m in, and I’ve never even attempted to be in a gallery,” she says. These x plus y equals z thought processes often rule art and its associated careers. You’re an artist, therefore you must be in a gallery. On the contrary, Badenhop maintains that the best way tends to be the simplest. It’s also a piece of advice we’ve all heard countless times before: just do what makes you happy. Find the part of the process that you’re most passionate about and pursue it, whether it’s the marketing, the business,the psychology of selling, or art for the sake of art. 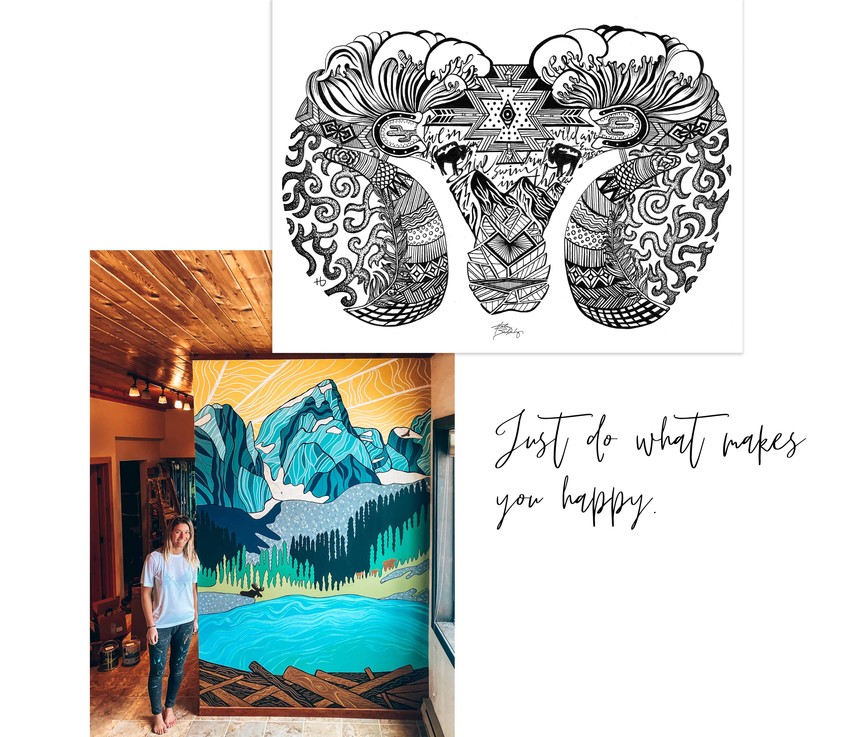 Entering into a creative career, much like the ski industry, is an intimidating endeavor, and Badenhop knows exactly how that feels. “Instead of looking at all the possibilities, you’re looking at how hard it is or how many people are doing it,” she says, gesturing to another artist’s work hung around the cafe we’re sitting in for proof. “But it really is possible to do exactly what you love and it’s usually possible in a way shorter time than you think... if I’m not where I want to be, I just haven’t done enough work to get there.” The work she’s put in thus far has taken vigilance and many years of hard, dedicated work: travelling, painting, networking, painting, putting herself out there in a world replete with other creatives. It’s taken her a long time to arrive at the place she’s always dreamt of being, and she doesn’t pretend that living a life of art doesn’t take work, much of which happens behind the scenes. 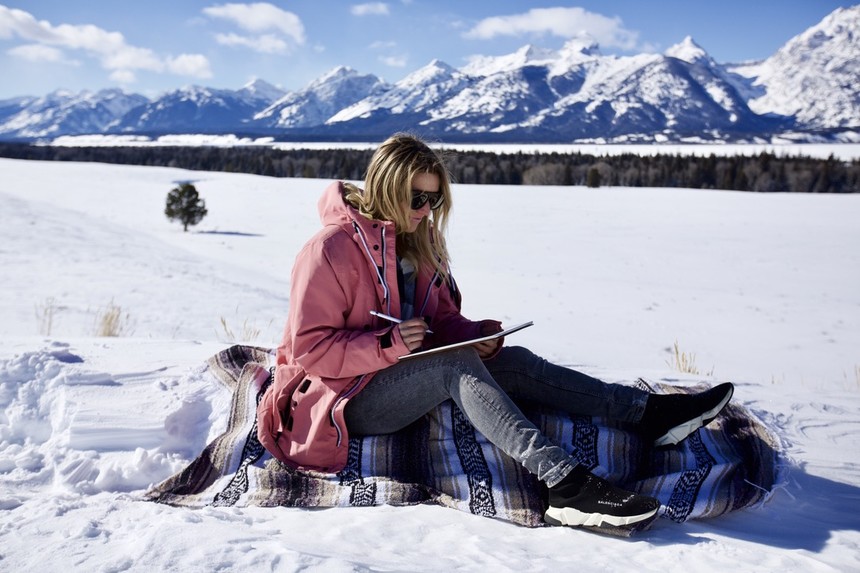 When many of the steps required for success happen out of the public eye, it sometimes makes it difficult for an artists’ work to be recognized and their hard work validated. Badenhop has taken a long and winding path to receive the feedback she does now: the man in this coffee shop commenting on the moose mural, clients sending pleased photos of themselves posed in front of her commissions, strangers recognizing her and her artwork from all corners of the globe. This life of hers came together slowly, somewhat unexpectedly, as most good things in life tend to do, and she’s excited to continue pursuing the life plan that she laid out for herself at ten-years-old.