The day started off like every other trail ride: packing up in the morning in an attempt to beat the heat. Water, snack bars, bike tools, and loads of sunscreen went into the packs. Plus a few things extra: long sleeved shirts, jeans, heavy gloves, and work boots. Luckily, all the heavy equipment was already five miles up Baxter Gulch, shuttled over the top by motorcycle weeks before.

We set off around 8:30 A.M., pacing ourselves for the brutal five-mile climb to tree line, high above the Crested Butte, knowing that a big day of work lay ahead. The goal was to finish connecting the existing Baxter Gulch singletrack with the Carbon Creek Trail, which climbed up a different canyon on the far side of Whetstone Mountain. It would serve as a sort of capstone project for this crew and would act as a missing link to complete a massive trail network south of town.

I remember what Crested Butte Mountain Bike Association’s Executive Director Dave Ochs told me a few days before, “Our big goal is to create a network.” And by that, he meant plugging all the holes in the already nearly 400 miles of trail that exist in Colorado’s Elk Mountains. 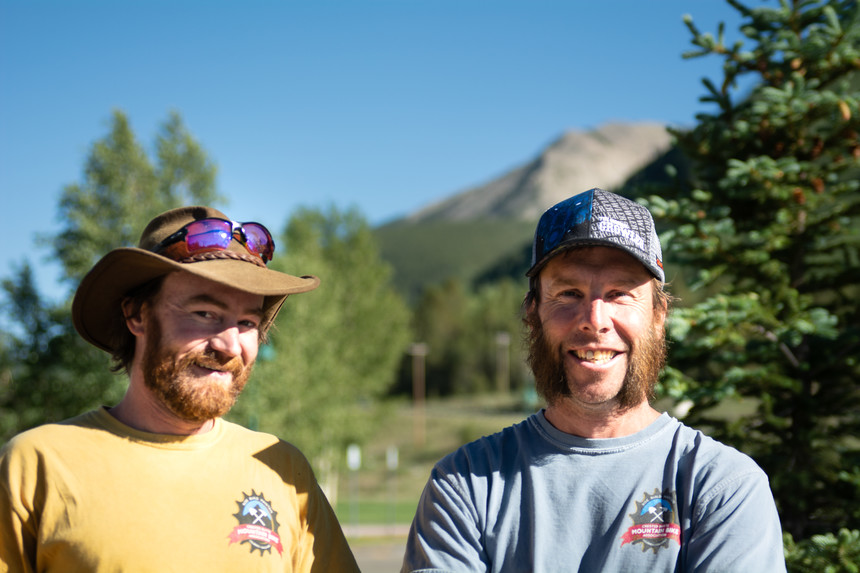 Plugging holes was exactly what the crew of three trailbuilders I was following into the woods was doing. Ryan Sullivan, Heather Bradford, and Ryan Maddux do this exact thing three times a week: pedal out into the middle of nowhere, park their bikes, and put their trail construction skills to use. They build berms and rollers, move rocks and dirt, and use the landscape to create playgrounds in the woods. As the working arm of the  CBMBA, the crew known as the Crested Butte Conservation Corps seeks to build and rebuild trail to minimize environmental impact, protect resources, and steward trail for all kinds of user group.

The silliness of what we were doing crossed my mind a few times that day: pedaling three hours up a hill to extend a century-old trail a few hundred feet to another. It was brutal work, especially in the dry summer heat. But without exactly this kind of hard work, these trails would go nowhere, and Crested Butte’s trail network wouldn’t really be a network, just a series of (while awesome) dead-end, out-and-back trails. And now who wants that? 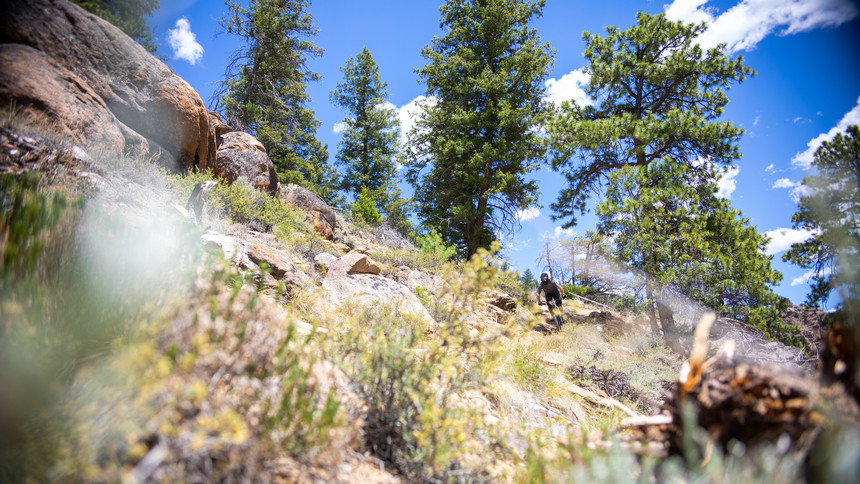 As I crested the final climb with the crew, I saw that what lay ahead was still very much a pile of rocks and dirt. Luckily, the end was literally in sight, as the Carbon Creek Trail came into view a few hundred feet ahead. Crested Butte hadn’t seen rain in over a week, and the drought was apparent, even at nearly 11,000 feet. The dirt was essentially dust, and our tires slipped out every chance they got. Even more reason to build sustainable, smart trail up high on this mountain.

Working together with the US Forest Service, which managed this particular piece of land, the trail crew had determined that a reinforced rock berm was the most effective way to flow traffic through the open field. Over the years, a social trail had formed that ran straight up and down the hill, but Maddux noted that it was really only rideable in one direction, which didn’t align with the overall goals of the trail.

The crew laid down their bikes and started getting to work. A pile of tools lay under a tarp a few feet off the trail. It included everything from shovels, pickaxes, a chainsaw, and Mcleods (a hoe/rake combo indispensable to wildland firefighters and trail builders). Each crew member picked up a tool and got to work.A general plan was already laid out as to where the trail would go, but the art of trail building lies in improvisation. “There is no way to know beforehand where every rock or tree will be,” says Sullivan “so when we are out here, our plan is pretty loose as where exactly the trail flows.” This rang especially true out here, with more than enough open space to work with, and a decidedly rugged, hand-crafted nature to the trails.

The big rock berm was nearing completion, but still needed its finishing touches. While Maddux and Sullivan shoveled dirt into buckets from a hole they dug next to the trail and carried them up to the berm, Bradford got to work picking up big rocks and moving them by hand to reinforce the wall. All the while, the crew cracked jokes and talked shit about each another. Classic trail chatter.

Moving dirt is something trailbuilders Ryan Maddux and Ryan Sullivan look forward to on the daily. | Jake Fojtik photo.

As the only female who works full-time on a trail crew in the area, Bradford feels comfortable hanging out in what can be seen as a boy’s club. She grew up ski racing and now works as a ski patroller at Crested Butte Mountain Resort and says summer trail work serves as a perfect counterpart to her winter activities. “Without someone doing it, we wouldn’t be able to ride out here,” Bradford says, “and besides it’s a pretty good way to get paid to ride my bike.”

As a crew leader, Maddux has been spearheading projects in the area for two years. Working with this particular crew, he has been able to lay down four miles of new trail this season already. Each crew member brought very specific skills to the table, his came from an environmental and project planning background, Sullivan’s from a background of building bike parks, and Bradford’s from her all-around badass mountain sense. 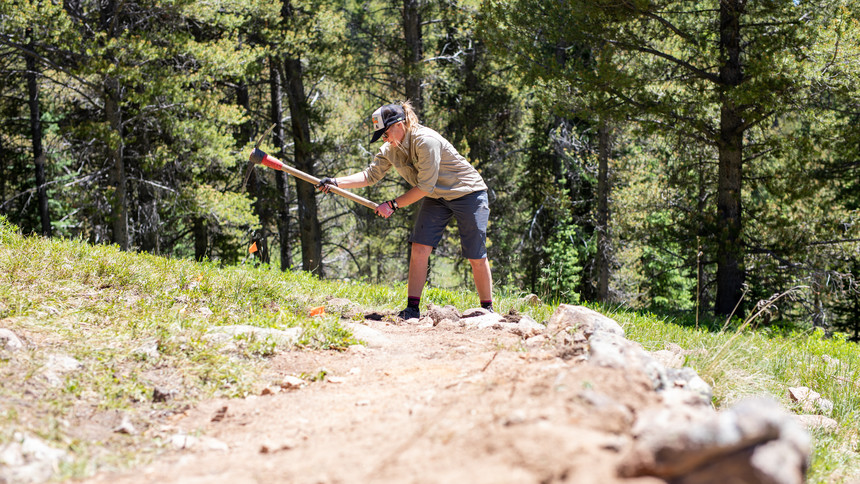 Heather Bradford is the only full-time female trailbuilder in the Crested Butte area, but to her, it's just another beautiful day in the mountains. | Jake Fojtik photo.

Founded in 1983, CBMBA exists as one of the oldest mountain bike groups in the world. The current generation of Crested Butte residents grew up concurrently with mountain biking, quite literally. As two-wheeled recreation became a thing in the late 70’s, Crested Butte became the beating heart of the young sport. What started in Marin County, California, as a rebellious activity quickly spread to this mountain community in Western Colorado.

Learning from mistakes is a big part of mountain biking, so of course learning from the struggles of Marin led to a bigger push elsewhere. Soon after the Marin phenomenon, Crested Butte watched an independently-fueled boom in mountain biking erupt.

Unlike Marin’s seaside hills, the Elk Mountains surrounding Colorado’s last true mountain town provided a very different arena. Don Cook, a trail builder responsible for 400+ miles of trails in Crested Butte, explains it: “The Marin groups had the technology, Crested Butte had the terrain, had they not come to Crested Butte to test their wares, would it have become a national sport in the '80s and a worldwide sport in late '80s, early '90s? No.”

The idea of building new trail specifically for mountain biking had never come up before, so Crested Butte’s crew faced uncharted territory. They set off boldly.

Luckily for Cook, the trails he started building followed existing USFS code, so when it came time for approval, they were absorbed into the larger trail system and opened for mountain bike use. As the sport progressed, and riders started wanting gnarlier trails, the goal immediately became clear: to build trails that are sustainable and will last for more than a season or two. This meant using new techniques for moving dirt and reinforcing trail, building berms for corners, and constructing creek crossings and permanent drainage solutions. These skills have been passed down to a new generation of trailbuilders, like Ochs and the trail crew in Baxter Gulch.

The sustainability has paid off. Today, Crested Butte has manifested itself as the destination for mountain biking in Colorado, home to premiere races like the Big Mountain Enduro, festivals like CB Bike Week, Outerbike and the Fat Bike World Championships, and sees miles of new singletrack built every year. Of course, it’s up to groups like CBMBA to strive to adhere to these decades-old standards and push the future of the sport through their ongoing projects. 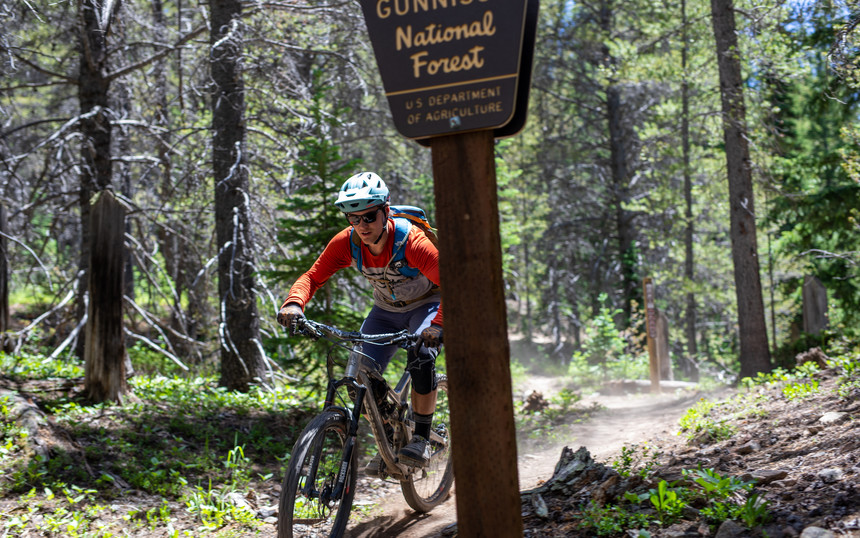 The author finds some flow deep in the woods of the freshly finished Baxter Gulch Trail. | Jake Fojtik photo.

Those ongoing project? Creativity, connectivity and creating the world’s biggest singletrack network. With the Riders off the Road Program, Ochs and the CBMBA aim to put mountain bikers where they want to be: riding dirt in the big mountains, not choking on truck fumes on their way to and from their favorite rides. What if the way there and back was as good as the loop you want to ride? Its all possible.

Bradford, Maddux and Sullivan finished up putting the last touches on the berm high up in Baxter’s Gulch. Final steps included packing down all the fresh dirt, making sure each rock in the retaining wall is solid, and the hardest part: waiting for some rain to roll through and act like glue. The trail would not be “open” to the public for another few weeks, pending final approval from the USFS. However, as we quickly learned, word travels fast in this part of the world: a mountain biker came pedaling up from the Carbon Creek trail, looking to connect to Baxter Gulch.

Instead of telling the rider off, Maddux chatted with him for a few minutes, asking for any feedback on the trail. The rider said he loved the concept and couldn’t wait for its official completion. The fact that he could now ride a nearly 15-mile loop connecting some of his favorite trails right from his front door blew his mind. Watching that interaction deep in the backcountry go so smoothly blew mine. Of course, the trailbuilders and the rider were cut from the same cloth, and it was much more than an interaction between builder and client, but rather one between like-minded friends who wanted nothing more than enjoy their time in the mountains. 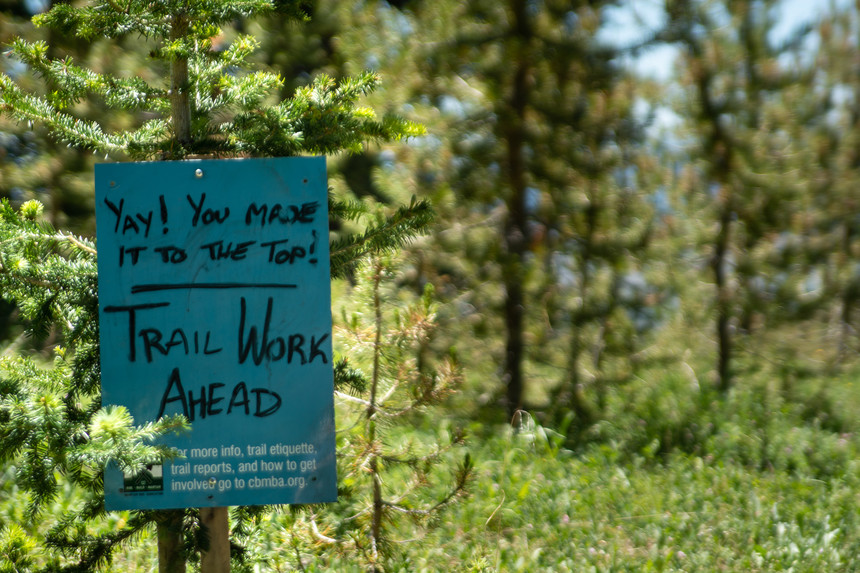 The sign says it all. Working on trails is an ongoing process, and feedback from riders in the field is something the crew cherishes. | Max Ritter photo.

With the heat of the day behind us, it was time to head back to town. After all, we had over five miles and 2,500 feet of fresh singletrack to descend. The builders stashed their tools, wrapping them up in tarps away from the trail, and gave the berm one last look. “Hope it rains,” said Sullivan clicking into his pedals. It would have been an understatement to say this team earned their beers that night.

Baxter Gulch is now fully connected, and CBMBA is proud to invite anyone to ride the challenging loop it now connects to.