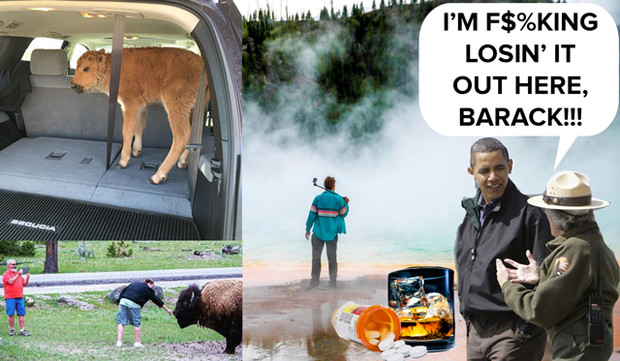 JACKSON, Wyo. — Yellowstone National Park officials have thrown in the towel and walked off the job barely a month into the opening of the nation’s first national park during its centenary season. Park officials claim to have “seen too much stupid” already, and say that their federal health plan, while generous in benefits, does not cover the prescription of opioids strong enough to dull the pain of witnessing tourists putting bison calfs in their vehicles — which forced park officials to euthanize the innocent animal — and clambering around the edges of delicate hot springs.

Officials have resorted to wrapping the park’s most famous natural features, such as Old Faithful, in steel rebar cages to keep selfish and willfully ignorant tourists at bay, and were last seen marching north with all of the park’s wildlife, trying to get far enough away that even the most eager tours could only get as close as the legal 25-yard limit.

“I’ve been witnessing stupidity at Yellowstone for years,” said YNP’s Head Ranger, Lindsey “Smokey” Robinson. “Back in the days when visitors were getting mauled while attempting to place their children on the back of a live bison for a photo, all it’d take to get on an even keel was a few whiskeys and a bottle of Xanax.”

“Now, even the gate attendants need a straight IV drip of horse tranquilizers just to make it to lunch without having a panic attack. For rangers working within the park, trying to keep tourists from taking selfies while hugging bears, there simply isn’t anything strong enough,” Robinson said.

A record number of park employees have been diagnosed with hypertension and severe anxiety disorders already this spring. 25-year-old junior ranger Forrest McFilson became one of the youngest people in the U.S. to suffer a heart attack after a group of Canadian bro travelers stepped off the boardwalk at Grand Prismatic Hot Springs and attempted to host a butterfly swimming race across the standing thermal pool.

While tending to their third-degree burns, McFilson was interrupted and forced to respond to a situation involving a foreign family who had tied a number of balloons to a bald eagle. They reportedly witnessed the bird sitting calmly on a fence post and were greatly concerned that it had lost the ability to fly, and sought to assist it.

McFilson’s heart nearly exploded, but, after recovering, he was grateful for the temporary lack of blood flow to the brain during the heart attack. “My brain just couldn’t handle the volume of ignorance and ineptitude overwhelming it,” McFilson told TGR. “That spot of calm, of complacency that washed over me as the blood stopped flowing … it was magical.”

At YNP headquarters at the north end of the park, ranger stress has become a veritable epidemic among those no longer strong enough to assist in the wildlife salvation march. The head of the DEA even placed a temporary moratorium on the federal ban on weed so that park employees could be treated with medicinal marijuana.

President Obama visited park headquarters yesterday afternoon in an emergency trip to boost morale, but was forced to leave early when protesting park employees attempted to hijack the Marine One helicopter and escape the tourons permanently.

Is this the first installment of TetOnion?
I like it.

The Bumion: It’s actually been running for a while. Check it out! It’s sad this is barely satire… I thought it was real for a minute. You got me. Watch yer back Dunfee

I worked in YNP in the winter of 73. I STARTED to work at the Lodge in the summer of 73. I quit. I am not able to put up with these people. The things I saw, well, lets just say a dumber bunch have never been born.