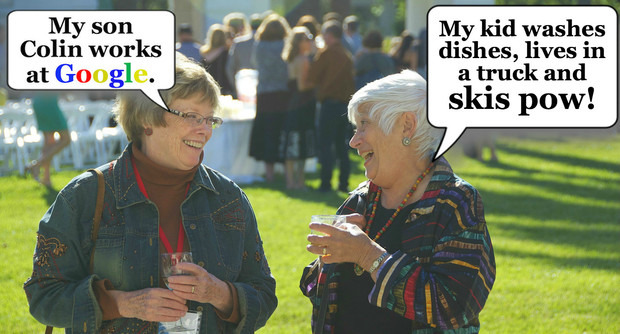 MARTHA'S VINEYARD, Mass. — A wealthy mother suffered a social shaming Wednesday after she was forced to disclose her two 20-something adult children are complete dirtbags.

Using euphemisms such as “living the dream” and “30 is the new 20” to describe her kids’ lack of financial and professional ambition, 57-year-old Connie Williams was cornered by several pretentious moms. The ladies forced Williams involvement in a rhetorical pissing contest to determine whose offspring was best meeting capitalism’s standards of success.

According to eyewitnesses, the Maine-based mother quietly listened to her socialite cohorts compare their children’s social and monetary status for approximately 23 minutes (and two-and-a-half double margs) before letting loose.

“I was sick of hearing about their kids’ banking and tech jobs,” Williams told TGR in an exclusive interview, “so I just told those bitches the truth — and it felt good!”

I told them that my kids wash dishes, live in trucks, and ski pow, and then, it got real quiet.

When finally forced to divulge what her children had done with their 20’s, the tipsy mother allegedly pulled no punches.

“I told them that my kids ‘wash dishes, live in trucks and ski pow,’ and then, it got real quiet,” Williams recounted. “They seemed very uncomfortable, and one of them tried to clarify, asking: ‘Yes, but, what do they do…?’

Williams then reportedly launched into a 20-minute expose of her children’s dirtbag lifestyles, detailing global travel, mountains climbed, breaks surfed, rivers run, dogs loved, and arrests made. Sources confirmed that during the tirade, each mother crept away until the only person left listening was a dutiful — but equally as wasted — bartender, who was in fact stuck in his stationary location.

Attempts to reach Williams’ kids, Tom and Ali, were unsuccessful. But during her interview with TGR, a proud Williams indicated Tom is somewhere in southwest British Columbia trying to find the Canadian love of his life while riding brown pow, and Ali is in Bali “finding herself” while studying to be a yoga instructor.