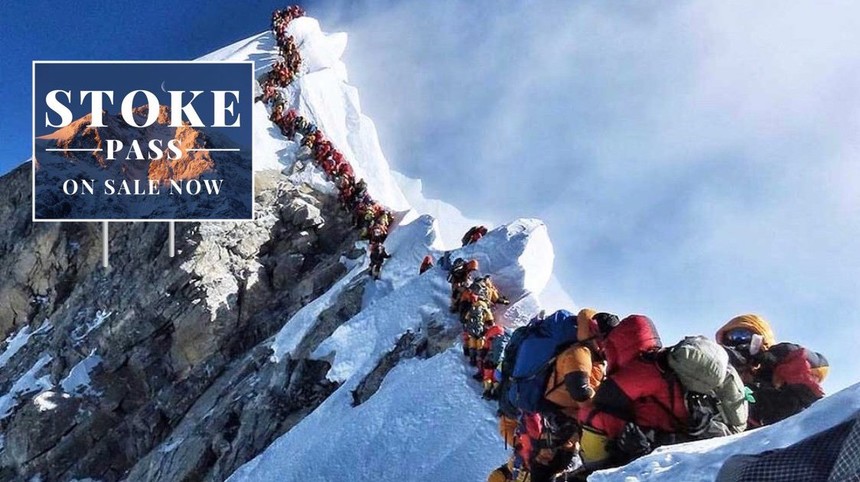 A line of mountaineers consider getting a Stoke Pass while en-route to the Everest summit. Nirmal Purja photo/mashup.

KATHMANDU, Nepal — The ski industry was further shaken up Friday when Broomfield-based Epic Resorts announced they’ll be adding Mt Everest to their portfolio of ski areas for the 2019/2020 ski and snowboard season.

According to an Epic Resorts press release, unlimited ski and snowboard access to the world-topping Himalayan peak will be included on the company’s Stoke Pass, with “several price-points to suit any budget, from dirtbag to investment bankers.”

Stoke Pass holders will be required to pay an extra $199 for the Everest add-on, but the addition will reportedly include oxygen masks, climbing equipment, basecamp tent space as well as Sherpa support.

Starting in Winter 2019, Epic Resorts will be proud to offer skiers and riders access to one of the most famous alpine environments in the world—however, it’s gonna be fucking dangerous.

The release also says that the development of lift infrastructure is well underway. “A new six-seater gondola to Camp 4 is currently in development and promises to whisk skiers and riders to well over 26,000 feet, where they can enjoy icy, windy, generally terrifying conditions under the shadow of Lhotse and the Everest summit,” the release states.

However, in a marketing statement posted to social media, Epic Resorts CEO Rhonda McSally makes clear that the company will hold no liability for accidents that may occur on the mountain. “Starting in Winter 2019, Epic Resorts will be proud to offer skiers and riders access to one of the most famous alpine environments in the world—however, it’s gonna be fucking dangerous. You’ll be oxygen deprived, the conditions will be horrendous (icy chunder to crevasse sessions) and the likelihood of disorientation and injury is high. Even though I’m CEO, I for one, will never go.

“But one thing’s for sure,” the statement continues, “your death-zone selfies will be totally epic.” IF this were true, it would just add to the joke that Everest is. May as well just keep trashing this earth, since we’ve done a good job of that over the past century.
EPIC is an epic joke