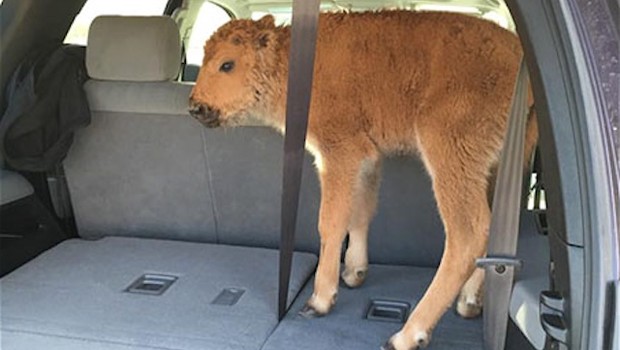 A pair of Yellowstone tourists grabbed a bison calf and put it in their rental car, thinking it was at risk of dying from the cold. Karen Richardson photo.

Updated 5/16/16 11:28 AM MST: The East Idaho News has reported that Yellowstone National Park officials have euthanized a bison calf after tourists had put in their car, thinking it was cold. This happened after repeated attempts to reunite the calf with its herd, where it was rejected by its mother the park stated in a press release Monday morning.

After the failed efforts, the calf started to approach both people and cars along the road, forcing the park service to euthanize the animal. Human interference can cause mothers to reject their offspring.

“Disregarding these regulations can result in fines, injury and even death, The safety of these animals, as well as human safety, depends on everyone using good judgment and following these simple rules.” Officials stated in the press release.

According to the East Idaho News, a father-and-son pair of foreign tourists on a trip to Yellowstone National Park over the weekend put a wild bison calf in the back of their SUV, and drove it to a park ranger station thinking it was cold. No, this is not a Bumion piece, but real news about real inept tourists.

Yellowstone's been off to a great start this year, as it only took a few hours following the park's centenary opening for a tourist to attempt to pet a live buffalo. Apparently though, this pair of tourists legitimately were concerned for the calf's well-being, tossing it into the back of their GMC Sequoia rental and driving it to a ranger station. A group of Victor, Idaho parents chaperoning a fifth-grade field trip warned them that they'd actually get in trouble for hosting a live animal in their vehicle.

Rangers ticketed the pair–it's illegal to approach wildlife in the park and you must stay at least 25 yards away from all large mammals there–and followed them back to the spot of the bison's capture, releasing it back into its god-given wilderness. I gotta ask though, where was the mom and how did these guys not get mauled?

Til next time on "What tourists attack..."