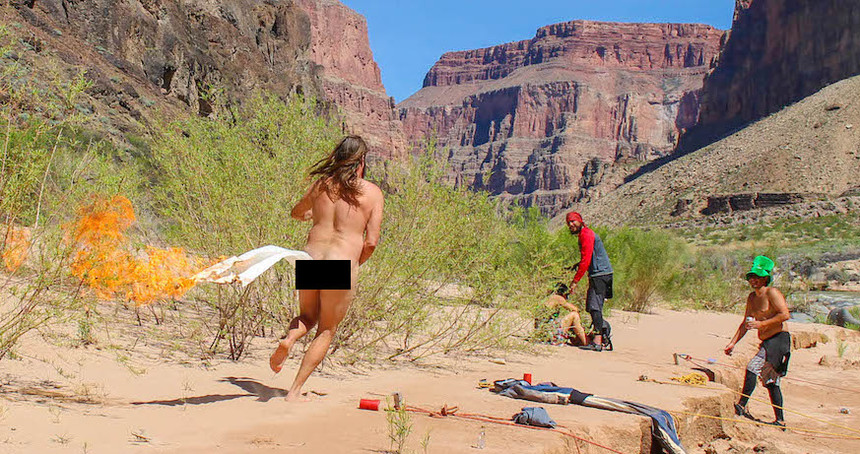 The rare species (Ignis Terra Pistris) emerges out of hiding to greet a rafting party in the upper reaches of the Grand Canyon. Nate Ross photo.

Grand Canyon National Park — Biologists were shocked, and a little disturbed, Thursday after a rafting party in the Grand Canyon reported the first-ever confirmed sighting of the elusive, often-rumored, Flaming Land Shark.

Up until Thursday's discovery, numerous rafting parties had reported sightings of the rare species, but none had captured photographic evidence documenting the elusive, drunken animal (Ignis Terra Pistris) in its native habitat.

National park researcher and Smithsonian biologist Greg Windsor was flown into the canyon once the sighting had been reported, but according to eyewitnesses, the specimen allegedly "sobered up" and retreated back to its tent habitat, where it "quickly passed out."

"Until this day, I always thought the Flaming Land Shark was a legend," Windsor told TGR in an interview held shortly after his research helicopter returned to the South Rim. "I grew up hearing my 'Pa talk about the Land Shark he'd seen in the 1960's, but I always thought he was just telling me tall-tales to frighten me before bed."

According to eyewitnesses, the specimen allegedly 'sobered up' and retreated back to its tent habitat, where it 'quickly passed out.'

According to NPS archives, the first recorded sighting of a Flaming Land Shark was made during John Wesley Powell's famous expedition down the Green and Colorado Rivers in 1869. Legend says that upon reaching the end of what is now known as Crystal Rapid, the party's entire stock of whiskey was depleted, prompting a multitude of Flaming Land Shark sightings — all in quick succession.

In an unrelated event, the same river party that captured the photographic proof requested medical evac Friday morning due to "glutial singing" and several cases of bacterial poisoning from suspected "shoot-the-boot" activities.

Experienced Adult entertainers Delhi Escorts Our Delhi Escorts advantage always has a need to serve better help of our customers, we never bargain on the possibility of association. We hardly oblige on client loyalties to any detriment.  Escort Service in Delhi

Escort in Delhi  I have dependably been a staggeringly remarkable in all points of view where My Everything relatives have been astoundingly bashful and sensible individuals.

Beware: I heard those things will shit on your campsite.

After changing the elements of the web content , it is very risky to come into once again on the previous position, how to retrieve the result for this we try to make the efforts of applying a new elements on this aspect.
Rohini Escorts

After changing the elements of the web content , it is very risky to come into once again on the previous position, how to retrieve the result for this we try to make the efforts of applying a new elements on this aspect.
Rohini Escorts They’ve constantly had a lovely acknowledgment in giving them what they require. In this way, do never again safeguard up and reach them appropriate at this point.  Independent Escort in Delhi |
Independent Escorts in Delhi