Editor's Note: Got your own tips to overcome Peter Pan Syndrome? Tell us about your struggle and share your personal wisdom in the comments. 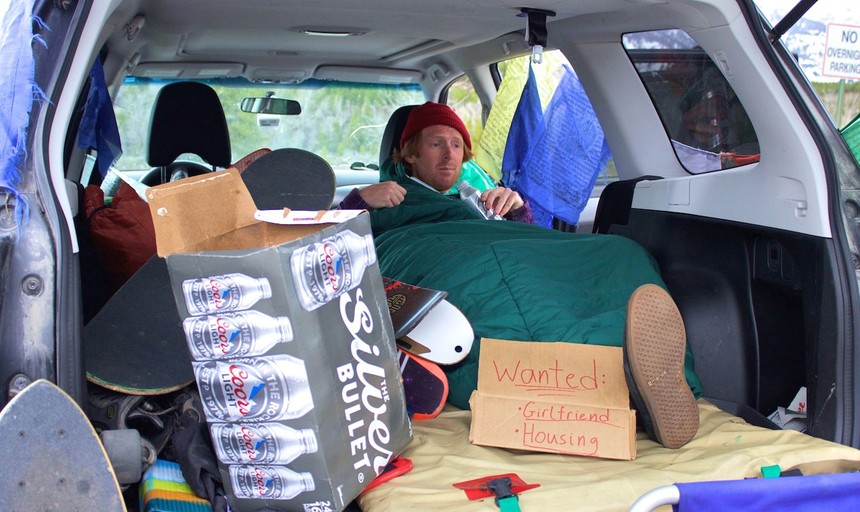 A young ginger ski bum quietly suffers from PPS in the back of his home/automobile. Sam Morse photo.

Dear TGR, I’d like to get something off my chest.

Five years ago, after graduating from my undergrad business program, I ignored everyone’s advice and, instead of getting a “real” job, I decided to chase my dreams.

My career prospects were good and I had several job offers on the table. My peers, parents and professors all encouraged me to jump headfirst into “adulthood”.

But deep down, I knew I wasn’t ready. It had been a grueling four (and a half) years of studying, and I needed a change. I was tired of staring at screens, answering emails and writing papers, so instead of listening to all of the advice, I decided to listen to my heart—and FOMO.

Following years of scrolling social feeds (while I was supposed to be studying) that displayed other 20-somethings having fun, I sold most of my stuff, broke up with my stable partner, traded in my sedan (for a van), and moved to a mountain town. To my parents dismay, I’d begun to show early stage symptoms of Peter Pan Syndrome (PPS).

What is Peter Pan Syndrome? The Urban Dictionary defines it as the “yearning to stay forever young at heart. ... The disinterest toward more responsibilities [having children/family] but more so, an interest in playing, having good times, exploring, traveling, learning and getting lost.”

The onset of PPS starts out innocently enough. After moving to a mountain/beach town, maybe you get a job (more likely 3-5 seasonal ones), find housing and even a new temp romantic partner to share it all with.

By now, you’ve definitely gotten a dog that you regularly offload on Mom and Dad while traveling for weeks and/or months at a time to places you can’t afford financed with credit cards that you can’t—and won’t—pay back.

Working three to five seasonal gigs, you make only so much money that you can afford the things you do (barely), but “saving” gradually becomes a distant concept.

Your parents beg you to stop. “But your career—and future…?” they plead.

You tell them it’s okay, that you’re just “taking a year off,” but deep down, you know the truth: There’s no going back. For a while, Mom and Dad send job openings and ideas for gainful employment, but eventually, they give up. Your BA in business slowly stagnates into an MA in dirtbagging.

With each passing year, you find yourself in the exact same situation you were in the year before. You wake up one crisp October morning at a trim farm somewhere in Trinity County. All of a sudden, you’re 27. And you wonder what the fuck happened to the last 365 days—or five years—for that matter.

You know it was fun, but only in a blurred, “that was sick” type of way. But it’s OK, because you’re still river-guide rich ($2-4k) from the Kern/American/Snake/Rogue, and your lift foreman from (fill in a ski resort here) left you a voicemail the other day asking if you’re coming back next season. Who are you kidding? Of course you are.

The seasonal life cycle begins to fit like a comfy neoprene wetsuit that seems to keep you warm and cozy, but in actuality, slowly saps your body heat until you’re shivering from too many face shots, festivals, trips, trails, shows, pizzas, bong rips and beers. You get the idea.

Eventually, it has to end. Otherwise, you wake up one day and you’re 47, and even though your instincts told you to go back to the “real world” and “get a job” in your late 20s and early 30s, you stayed because “it was sick,” and “the dream.”

In my case, friends from childhood constantly tell me they wish they were doing what I am. “You’re living your best life,” they say. Sure, it all looks great on social media, but meanwhile, I cook Thai food Wednesday through Sunday, work as a liftie during the winter, teach yoga at odd hours and, between river guiding and landscaping, spend most of the warmer months doing semi-hard labor. But the powder turns are great.

And that’s the thing with PPS, and the forever-young mentality: it works just fine, until it doesn’t.

The good news? If you or a loved one are caught in the grip of PPS, there are ways to alleviate symptoms and even reverse course (unless you’re over 35, then you’re pretty much fucked). There is hope, but acknowledgment of the problem is always the first step on the road to recovery—and adulthood.

So, if you or a loved one are in the throes of Peter Pan Syndrome, here are some ways to combat the affliction:

1.) Avoid Smoking Cannabis Every Day, Especially When You Wake Up

2.) Avoid Drinking Alcohol as a Means to Escape Boredom and Depression

4.) Make Goals—and Stick to Them

5.) Be Punctual. Show Up When and Where You Say You Will

8.) Be Honest, Even When Nobody's Looking

Have you or has someone close to you struggled with PPS? Tell us about your struggle and share your personal wisdom in the comments. We're in this together.

Has anyone been able to find out which is the best product among those listed here?
https://buyelectricscooternow.com/best-razor-electric-scooter-charger/

Has anyone been able to find out which is the best product among those listed here?
https://buyelectricscooternow.com/best-razor-electric-scooter-charger/

For some, this may be helpful, but I have found the level of happiness with one’s life is the most important thing to living a full and fruitful one.  It doesn’t matter how you get there or what you do to achieve it.  No one should tell you otherwise.  If you want to try and stay forever young, do it.  If you want to work five days a week plus overtime with two weeks paid vacation, do it.  What works for one may not for another.

People call me Peter Pan as an insult, but I wear it like a badge!