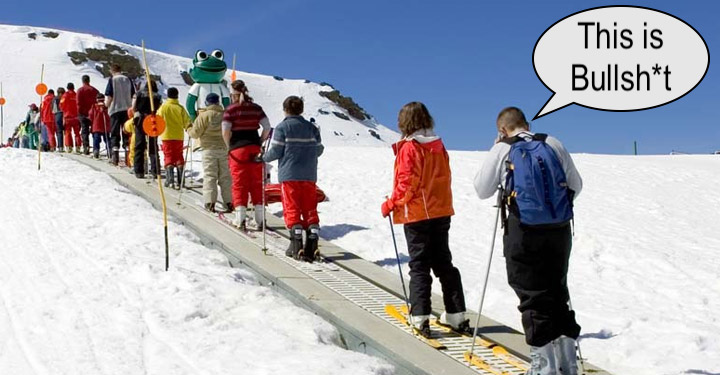 MOUNTAIN TOWN, USA — Epic Mountain Resort’s newly opened Base-to-Peak® Epic Magic Carpet® suffered a severe backlash in its opening week with a large plurality of locals condemning the lift system as “total bullshit” and “a complete waste of money, time and hours on the hill.”

The magic carpet takes the place of the ski area’s 57-year-old beloved tram, Trammy McTramface, which was recently decommissioned and repurposed for scrap metal to be used in building out Epic Mountain Resort’s booming condo real estate investments.

In a carefully worded marketing statement, Epic Mountain Resort spokesperson Abby Matthews redirected all responsibility for the new uphill infrastructure, spinning the news as as a “win-win” for snow-sports enthusiasts and the ski industry at large.

“Epic Resorts is proud to be pioneering new, innovative ways to provide Epic on-hill experiences for our guests,” the statement reads. “We acknowledge that Trammy McTramface was a beloved icon, but we’re sure that the Epic Mountain community will grow to love the Epic Magic Carpet®, just as much—despite the Epic wait time.”

Many locals—frustrated by the slow conveyor-belt tram—vented their anger via social media, swearing to never buy an Epic Mountain Resort pass again.

“The only thing ‘magic’ about that magic carpet is that I can take magical mushrooms at the bottom and be fully peaking by the time I’m at the top,” Epic Mountain local, Robert “Scuzzy” Johnson told TGR. “At least the visuals would be epic.”