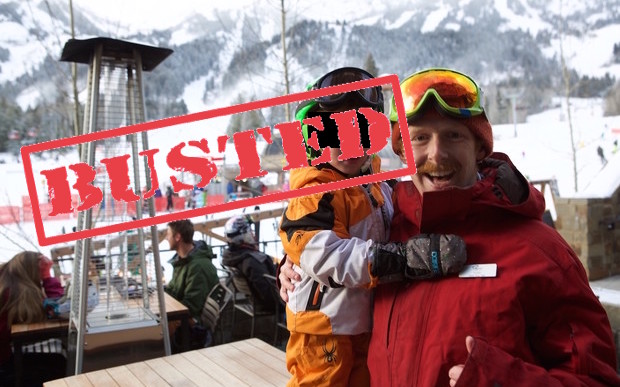 The plot, dubbed “diabolical” by authorities, aimed to defraud elite ski schools around the country in a pay-to-play scheme that purportedly netted ginger mastermind and infamous ski town cougar hunter, Tony K, 25, with “hundreds of dollars and several 12 packs of microbrew,” according to redacted police reports.

One of the suspects, now in lockup, 26-year-old Shredder Morris told TGR upon being apprehended that he had no remorse and would do it all over again in a second.

“Yo, those early-ups trammies were f**king siiiiiiick,” Morris whispered excitedly from his Teton County jail cell. “When that crazy daywalker, TK, said he had the ins on first tracks, I thought he was full of shit.”

According to Morris, the only downside was that he was often stuck in ski school groups with tweens who, while competent, often couldn’t keep up, so there was occasionally some waiting between laps.

The scam was finally busted when attending tram lifties noted that Morris, who is 6’1, was “much taller than the other 10, 11 and 12-year-olds in his ski school group, who, on average, were merely four to five feet tall. “I’m just big for my age—don’t shame me,” he cried as local sherriffs handcuffed him in front of a large parent group.

We brought that sicko down,” he said with venom in his voice. “If I have my way, Tony K will never shred another pow lap again.

In a written statement, ginger mastermind Tony K told TGR that he was planning to appeal the indictment, saying that he was merely trying to create a more equitable powder-skiing/riding atmosphere for ski resorts around the country.

A local sheriff, who spoke on condition of anonymity, said that the suspected mastermind “was a real piece of work,” and would have “the book thrown at him for his despicable ski town crimes.”

“We brought that sicko down,” he said with venom in his voice. “If I have my way, Tony K will never shred another pow lap again.” Shocking that this individual came up with this plan in today’s sharing and caring environment. Thank god the authorities were able to put a stop to this crime!