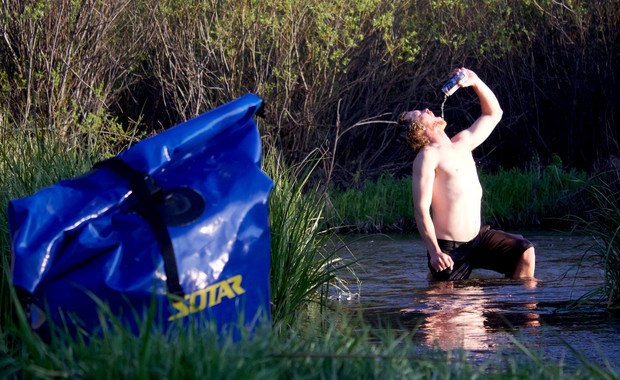 JACKSON, Wyo. (TGR) — Wildlife biologists were shocked and females were aroused Wednesday when pictures surfaced on social media that seemed to show an endangered River Rat bathing in a creek in Jackson, Wyoming. Field biologists have been dispatched to the area to locate the elusive creature.

“River Rats only come this far north when we have over a 500 inch winter,” Pound told TGR. “The snowpack didn’t get anywhere near that big. I mean, Colorado got hit pretty hard, so I bet we’ll be hearing of River Rat sightings down there, but probably not Wyoming.”

But despite the local naysaying, many experts were convinced that the sighting was genuine and warranted further investigation. Yellowstone National Park biologist and River Rat expert Linda McDaniel asserted that after seeing the pictures, she was sure of their authenticity.

“That picture clearly shows a classic River Rat mating display,” McDaniel explained to TGR during a Skype interview. “The flexed pectorals, the PBR bathing — everything about it hinted at the larger struggle to reproduce and find a mate. He’s [the River Rat] clearly trying to get laid by exhibiting his well-defined masculinity in a public setting.”

After the pictures caused a media firestorm, the photographer, local cougar hunter and housing entrepreneur Toby Koekkoek, 24, reached out to TGR to tell his side of the story.

Park biologists are encouraging the public to feed them alcohol, cannabis — and to liberally procreate with them whenever possible.

“No shit — there I was — just taking a jog next to the creek when I looked up to behold the most majestic fucking display of animalistic dominance I’ve ever seen,” Koekkoek recounted. “The way the beer and Dr. Bronner’s was poring down his chest — it was hypnotizing! During the few minutes I was taking pictures, no less than three yoga panted females stumbled into the creek to introduce themselves and give him their number. Before leaving the water, he shotgunned his third PBR and drunkenly yelled “I CRUSH!!!” to the the heavens — it was incredible!”

Despite the photographic evidence, the NPS is still asking anyone with further knowledge of the River Rat’s whereabouts to report to them as soon as possible. River Rats are notoriously friendly, and park biologists are encouraging the public to feed them alcohol and cannabis — and to liberally procreate with them whenever possible.