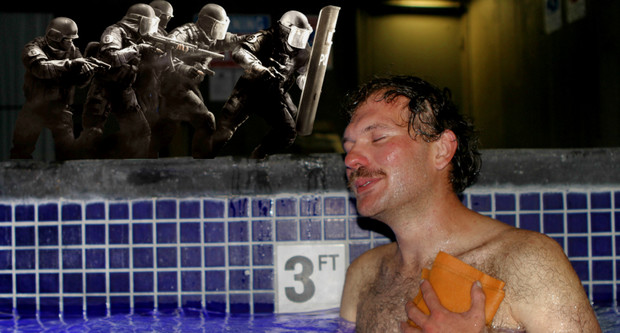 TRUCKEE, Calif. — Local, state and federal authorities tightened the noose Wednesday and brought an end to what many crime watchers have dubbed the most daring hot tub poaching spree in modern history.

Notorious dirtbag and Peter Pan Syndrome survivor Yale Brown, 31, was apprehended in Truckee, California, this week after his desire to soak in yet another unpaid-for hot tub caught up with him, leading to ruin, regret — and unwashed cuticles.

Sources familiar with the suspect told TGR that Brown was “kayaking, biking, camping and climbing” his way through the West. Possible links between the alleged action-sport activities and Brown's need for a hot, sanitizing dip have been frequently eyed as a motive for the crimes, but forensic experts aren’t taking anything off the table.

Regional agencies insist there is no official tally yet, but many are speculating that Brown defiled what could end up being “tons of fucking hot tubs.”

“This guy really had no morals,” Western Interagency task force chief Walt LaFors told TGR in a written statement. “I’ve seen a lot of terrible shit during my time in law enforcement, but this … this was something else. He’d steal towels, he’d hit on young women, he’d even — pee in the water.”

Brown’s trail was picked up mid-summer when his calling card began showing up all over the Rocky Mountains: a soggy 12-pack of PBR/Rainier, discarded empties strewn throughout the lounge areas and residual suds of Dr. Bronner’s copiously lathered in the tub.

Witnesses who encountered the suspect during his illicit intrusions recounted being scared, inebriated, and sometimes — oddly aroused.

“He wasn’t my type,” Truckee resident Chanel Williams said. “But my sister was definitely into him. When we saw him jumping the fence, we were pretty creeped out, but once he got in and started drinking with us, we realized he was just a traveling kayaker looking for a bath and a warm bed.”

Brown is currently languishing in a Washoe County jail, where he is awaiting arraignment. As of press time, a pro hot-tub poaching Kickstarter campaign called “#Tublife Is Not A Crime” had raised over $567,000 to free the tub-rights activist. Brown says that once out of jail, he’ll use the crowdsourced funds to replace his back Subaru bumper and buy both an Epic and Mountain Collective pass for the coming winter.

If someone doing wrong things and you do report that’s fine. But don’t do this kind of things because it hurts a lot. The texascollegesu.com will help you.

John Collinson has made this kind of turn in the Wasatch over and over again - but are we coming to a point where the future of skiing in Utah is at risk? | Jeff Cricco/TGR photo. Imagine this: you sit in immovable traffic, waiting to go skiing. You sip your cooling coffee, take a bite of your local on-the-way coffee shop burrito, and curse both the snow and the traffic gods for not blessing you with either plentiful snow or clear passage. Your car idles as you turn up the radio and

, a documentary by Jordyn Romero that's out now, follows the story of Sanu Sandeepani, one of the first local, female surfers from Sri Lanka. On the south coast of Sri Lanka, surfing is everywhere, yet local girls are discouraged from participating in the sport. Instead, they’re expected to stay home and concentrate on housework, getting married and caring for children. Sanu is challenging the strict gender roles of her village and dreams of becoming the first woman surf instructor in her