Editor's Note: The last few summers, Yellowstone National Park has been getting a lot of exposure. In what have developed into near-weekly incidents, the park has become synonymous with people not respecting the natural world — sometimes to dangerous effect. In The Bumion, we like to make light of things, but all jokes aside, Yellowstone is dangerous and should be respected! If you're unclear on the rules and regulations of this pristine natural wonder, please visit www.nps.gov/yell to give them a review. 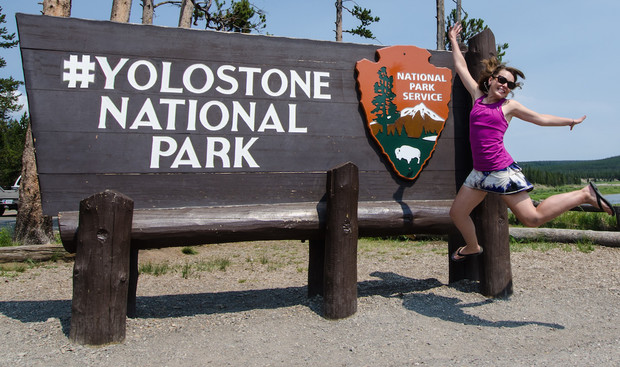 Visitors were ecstatic with the new park ethos and relaxed regulations! Just after taking this photo, this tourist fed a bear cub some leftover McDonalds in a nearby meadow. Flickr Creative Commons photo. Sam Morse photoshop.

#YOLOSTONE NATIONAL PARK, Wyo. — Succumbing to public pressure and overall behavioral trends, the National Park Service relented today and officially changed the name of the world’s first national park to #Yolostone. Partly due to tourists continuing to do “extremely dumb shit,” the Park Service made the switch in order to better reflect the “do-anything” attitude widely held by a plurality of visiting park-goers.

#Yolostone National Park superintendent Shelly Williams confirmed the switch in a press release that also included a list of revised rules and regulations for the newly dubbed #Yolostone.

“In this park’s 146 year history,” the statement reads, “we’ve never had more occurrences of people acting stupidly and putting themselves at risk, so in response, we at the NPS have decided to just say ‘Fuck it.’ We’re rechristening this national treasure and naming it #Yolostone. After all, you do only live once, so you might as well get some bison selfies along the way.”

The release continues to describe new rules that are aimed to bring regulations closer in alignment with current park use. All visitors to #Yolostone will now be required to sign a legal waiver at park entrances acknowledging legal liability for their safety and behavior. Examples of the waiver released today include the classic icon of a stick man being gored by a bison, but also include a similar image — with an X through it — of a figure riding one of the large mammals while waving a selfie stick heroically. A misnomer at the top of the revised waiver says in large-set bold letters: “THIS PLACE CAN FUCKING KILL YOU!!”

We’re not encouraging people to be stupid,” Superintendent Williams told TGR in an interview. "But we know they will be.

One of the new programs being implemented at #Yolostone will be a wildlife adoption program where permitted tourists will be able to fulfill their deep-seated fantasies of scooping up young, doe-eyed mammals from their natural environment. Visitors are also now encouraged to hold up traffic whenever possible by stopping in the middle of the road to observe wildlife.

The changes follow a 2018 Summer that saw an inordinate amount of unforced errors committed by visitors, including several instances of tourists straying from designated paths, run-ins with wildlife and at least one misguided bison calf rescue.

“We’re not encouraging people to be stupid,” Superintendent Williams told TGR in an interview. “But we know they will be. In modern society, stupid just happens. So #Yolostone’s new policy is simply to preempt the stupid — to tai chi the stupid — and hopefully harness it in a positive, proactive manner.”