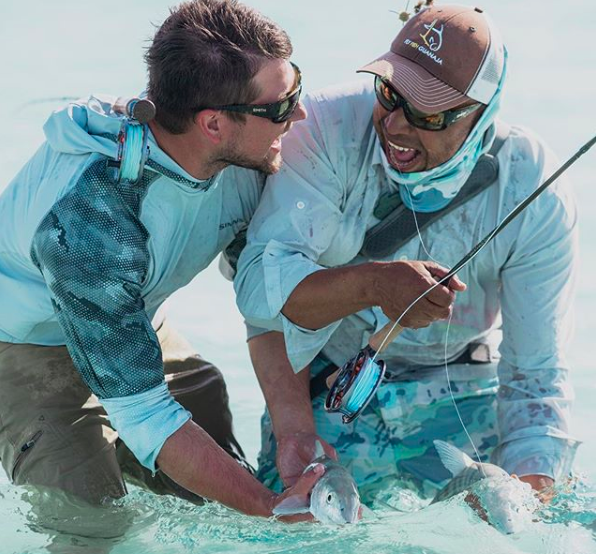 BAJA, Calif. — A bromance blossomed Thursday in the heat of a tropical fishing trip after newly met acquaintances — introduced by mutual bros — hit it off while angling for trophy fish.

Brian Samuels, 31, and his guide, 29-year-old Connor "Trout-Slayer" High had known each other for only a few hours when, at approximately 2:37 p.m., they caught their first fish together.

"It was exhilarating," a still-glowing Samuels told TGR. "Connor was extremely experienced — yet patient — and he was a really great communicator — everything you could want in a guide. I know we just met ... but I hope we get to hang out again."

Friends reported that after a few cervezas, Samuels and High settled in like old buds, telling jokes, shit-talking, and rhetorically sandbagging each other at ever turn.

"They really hit it off!" Samuels' friend from Jackson Hole, Dougy Douglas, told TGR. "He's so sarcastic, most people think Brian's a total dick, so it was awesome to see him connect with someone."

We just clicked. Hanging out was so natural and easy. I haven't felt that way about a bro in a long time — he liked me for me.

Asked for comment on the budding bromance, the "Trout-Slayer" admitted that, while he meets many cool guys guiding trips, this one was special.

"We just clicked," the Trout-Slayer confessed, blushing. "Hanging out was so natural and easy. I haven't felt that way about a bro in a long time! Brian invited me up to visit him in Jackson Hole so we can take out his drift boat and see all of his favorite angling spots — and I said yes!"

When asked about the upcoming fishing expedition in Wyoming, Samuels bubbled with optimism.

"I mean, I know it seems like things might be moving fast, but I really think he could be it," said Samuels. "He could be my new fishing buddy."

*This is a work of satire, obviously.