Editor's Note: This is a work of satire—anyone living (and playing) in a mountain town is likely in a good situation. That said, poverty is no laughing matter—especially in this day and age—but making more with less and living the dirtbag lifestyle goes hand in hand with being a young ski bum. So if you've ever camped in the back of your car for a powder day, refilled your coffee at a Trader Joe's, or worked a bunch of crappy jobs just to get some turns, this one's for you ; )

MOUNTAIN TOWN, USA — In response to growing ski town inequality and the impoverished conditions in which many of its employees live, Broomfield-based Epic Resorts unveiled Sunday its groundbreaking Adopt A Dirtbag® campaign, which aims to alleviate poverty and further enable privilege throughout the American West.

The campaign is the result of a collaboration between Epic Resorts CEO Rhonda McSally and Protect Our Dirtbags (POD) President Mark Willis, who both spent time as poor ski bums (subsidized by wealthy families) during their twenties.

According to an Epic Resorts press release, the “Adopt A Dirtbag® campaign will seek to pair ski bums, river guides and seasonal mountain town workers with caring benefactors who’d like to make a difference in a young person’s life—and help them ‘live the dream.’ ”

Adopting families can choose to make a one-time monetary donation, a monthly contribution, or buy a dirtbag of their choosing anything from a 30-pack, to new skis, even a season pass. 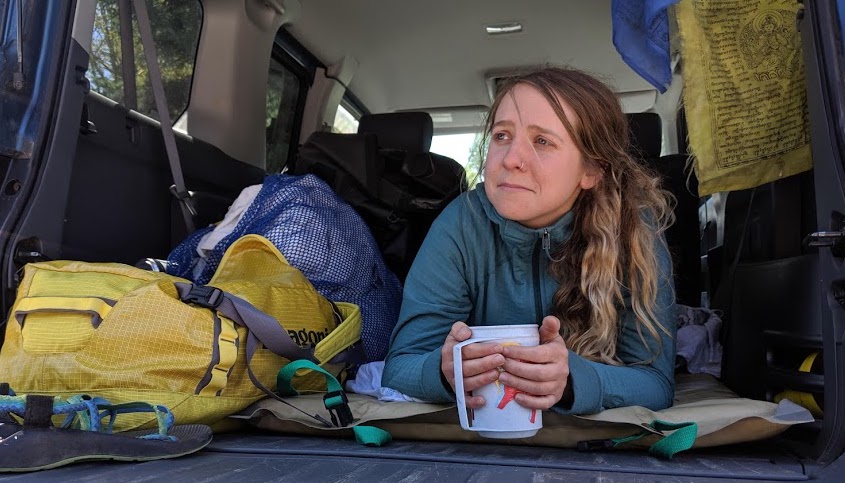 Katie ZoLo drinks a cup of coffee in the back of her #vanlife rig as she wistfully dreams of finding happiness one day. Sam Morse photo.

Along with the statement, Epic Resorts released a short video showing some of the 20-somethings who will be up for adoption, including Katie ZoLo, 24, who says she is incredibly lucky to be involved with the Adopt A Dirtbag® campaign and has already been texting with a few families that are interested in helping her out.

“I’ve got some great leads!” ZoLo told TGR. “One family wants to me to house-sit their 3rd home in Jackson during the winter and 4th home in Maui during the summer. Another one wants to buy me a Rover and a ski pass! What should I do?!”

As head of Epic Resorts, McSally says she feels a special responsibility to the young people who work for her ski conglomerate every winter and summer. “Except the J1s—they’re on their own,” she admitted dryly.

You’re are only hope. With Powder Mag announcing their change to now quarterly publication resources for great skiing journalism and satire shrink at glacial rates. Bless you and bless us all, the artists, musicians, the dirt bags of all generations. You, TGR are our guiding light; the proverbial beacon in the growing darkness.