The ZeroG line is Blizzard's new touring line, meant to marry light weight and torsional stiffness into a package that can go uphill and downhill with minimal compromises. We tested the ZeroG 108, the lineup's widest ski at 108 underfoot (the dimensions of the 185 cm length ski are 136-108-122), weighing in at 1742 grams per ski, has a paulownia wood core, and a relatively long 27 meter turning radius. It's basically the more touring-oriented cousin of the popular Blizzard Cochise.

"Carbon Drive" technology used in the ZeroG lineup is "a 3D unidirectional carbon fiber frame," the intent of which is to maintain a high level of torsional rigidity in a ski; lighter weight is a byproduct, but not the focus, of the carbon construction. If you want to chime in on the details of carbon engineering with some hardcore tech wizards, you might want to check in on this thread on the TGR forums.

Tunnelling through the jargon, "3D" refers to the carbon construction method of wrapping the tips and tails of the ski in the carbon weave and giving the carbon weave a 3D shape.  This is in contrast to a unidirectional carbon sheet sometimes laid in one direction on something like the ski's topsheet. The "frame" refers to the method of running the 3D carbon weave along the entire running length of the ski to bridge the tip and tail area in order to attempt to control the skis' longitudinal flex, thus framing the ski.

Throughout the ZeroG line, the construction and flex on each size changes, presumably by tuning the wood core and the carbon layups. Longer lengths are the stiffest, with the ski getting slightly softer from there on down. Blizzard's intent in doing so was to to attempt to optimize the flex and rocker profiles for each target skier at their weight and hence aggression requirements. 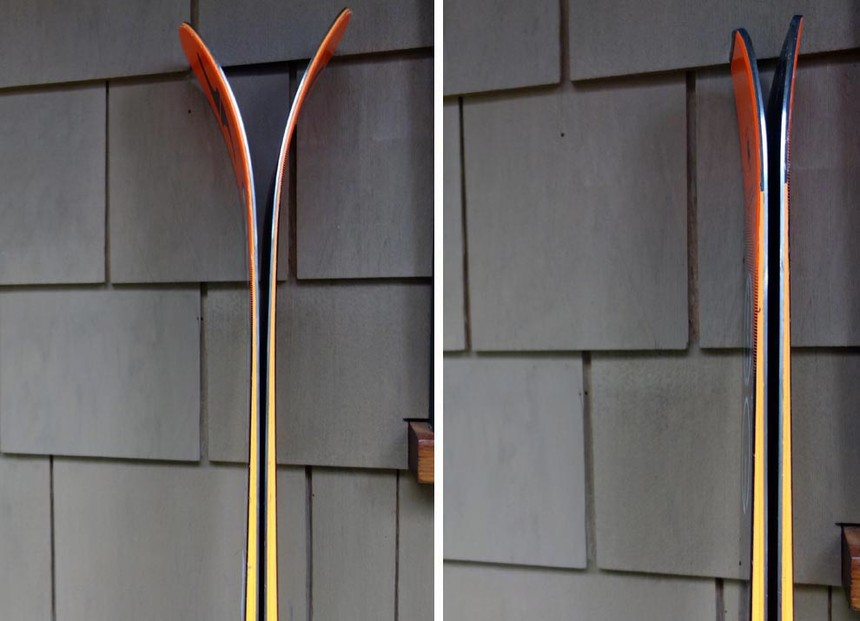 This ski was mounted with the  Fritschi Vipec binding (Teton tested review here) and has been used in a mix of conditions including inbounds (4 days) and touring (15 days) with almost all of the days spent in backcountry of Whistler, the Duffey and ion the BC Interior. Bindings were mounted on the recommended line. I’m not huge at 160 lbs, but do spend 100+ days a season skiing, with most of the days in the backcountry. My skiing is usually in high moisture-content snow. Accordingly, my preference is for bigger skis and relatively stiff boots. 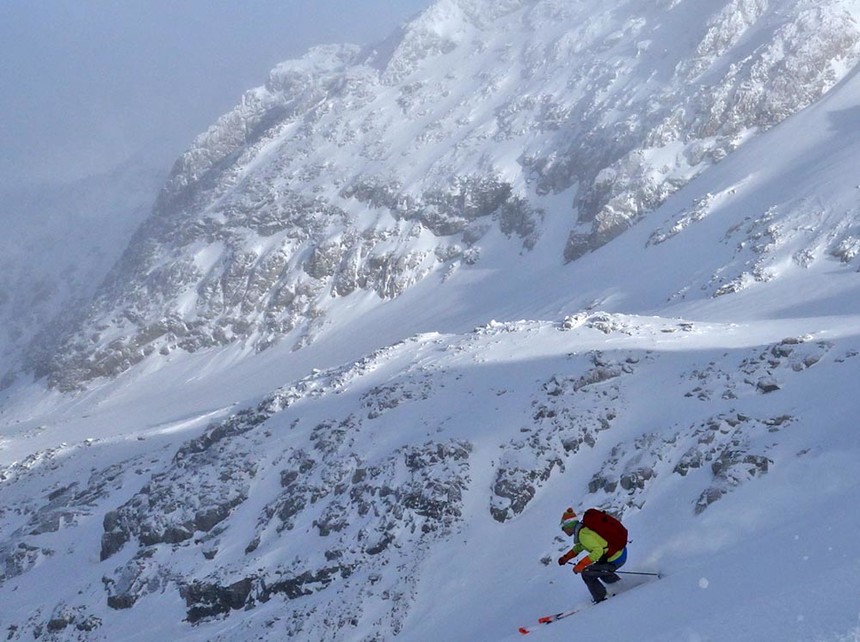 Lee Lau giving the ZeroG's the Whistler version of the Teton Test on Blackcomb Glacier. Photo courtesy of Lee Lau.

Inevitable comparisons will be drawn between the ZeroG 108 and its on-piste cousin, the revered Cochise (one look at the dimensions speaks to the similarities).  One could think of the ZeroG108 as a lighter weight Cochise, tuned for powder.

Powder skiing-wise, the ZeroG 108 is very good. Blizzard's tweaks included incorporating a more upturned tip design with an early rise that rises faster, as well as a tad of softness on the tip. The effect is that the ZeroG 108 planes faster in soft snow, making it capable in the triple overhead blower we've been experiencing lately in British Columbia.

The ZeroG 108 Outside of the Pow 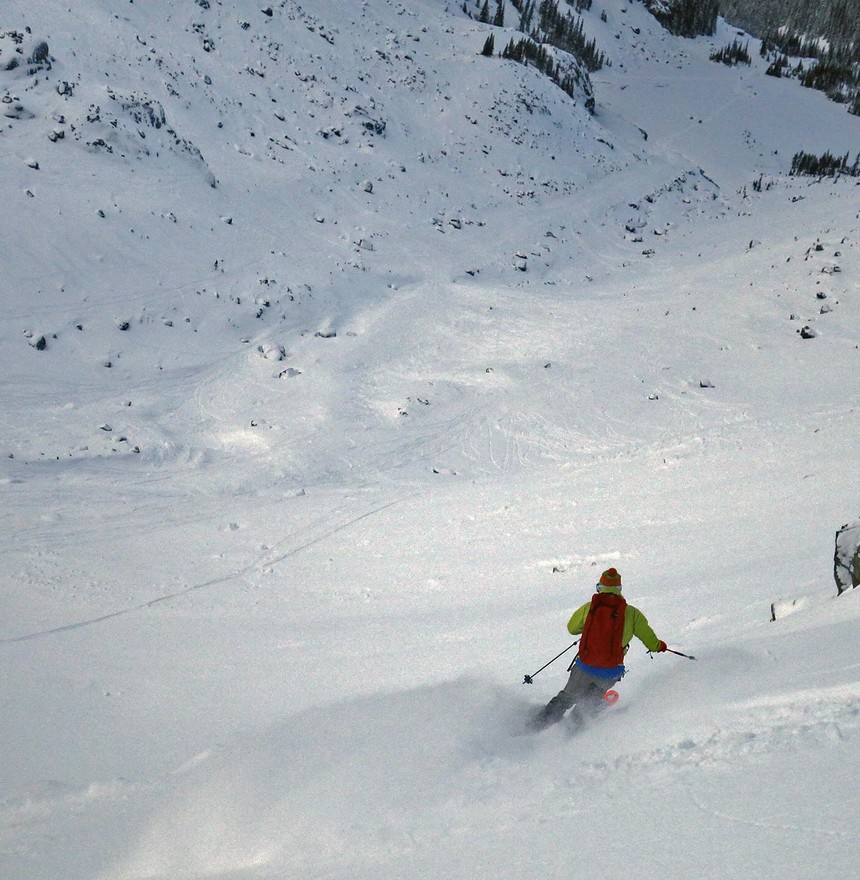 "The long radius, stiffness, performance-orientation of the higher end Blizzard on-piste line is readily apparent in how the ZeroG 108 performs." Photo courtesy of Lee Lau.

Head over to chopped up snow, and the ZeroG also performs. It seems to me that this ski gets minimally deflected, perhaps due to its stiffness underfoot and at the tail, or perhaps some shock absorption property of the paulownia wood core. Change your balance fore-aft and you can accelerate the ZeroG 108. Lay them over at speed, and they don't fold.

I haven't had these skis out on steep skiing touring missions yet, but I expect them to shine. Edge hold and flat tails, which are good for sawing back and forth in skinny couloirs or using as pickets or snow anchors make for a high-performing spring ski, albeit one on the fatter side.

One observation I did have about the ZeroG 108 is that it is sensitive to tuning. I'd suspect that the carbon makes the tips and tails stiff enough torsionally that they engage. The factory tune on the skis was very aggressive and good; it comes stock with a factory 1º base  and 2º side edge bevels. The bases were soaked with wax. The ski initially was hooky until I hit it with a slight bevel at tips and tails. Even then, the ZeroG 108 isn't your average touring ski.

CHECK OUT: The entire lineup of 15/16 ski and snowboard Teton Tested gear tests

Another observation I had is that this ski wants to be used aggressively. The long radius, stiffness, performance-orientation of the higher end Blizzard on-piste line is readily apparent in how the ZeroG 108 performs. Simply put: it isn't a laid back meadow-skipping tool. You can make it go places in tight trees at slow speeds, but if that's 90% of your skiing, perhaps you might want to pick something up that's a bit more detuned and with more languid manners. The ZeroG isn't for relaxed lazy skiers.

Included with the ZeroG skis are ZeroG skins. These are cut to fit to the ZeroG 108 and are made for Blizzard by Pomoca from a mohair/synthetic plush. They have a stitched wire tip and adjustable tail strap which conveniently doesn't slip off the notched ZeroG tail. The skins glide exceptionally well and pack nicely because they're so light. The glue is on the light side and I found that touching up the tail with some additional skin glue was necessary on those yo-yo days with many transitions (the webbing on the tail.lifts the skin off the ski base). Because the skins are so light they're a tad fragile so be warned if you have the bad habit of skinning over rocks. 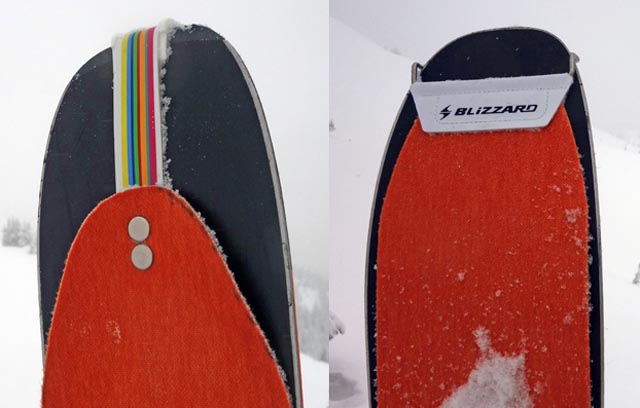 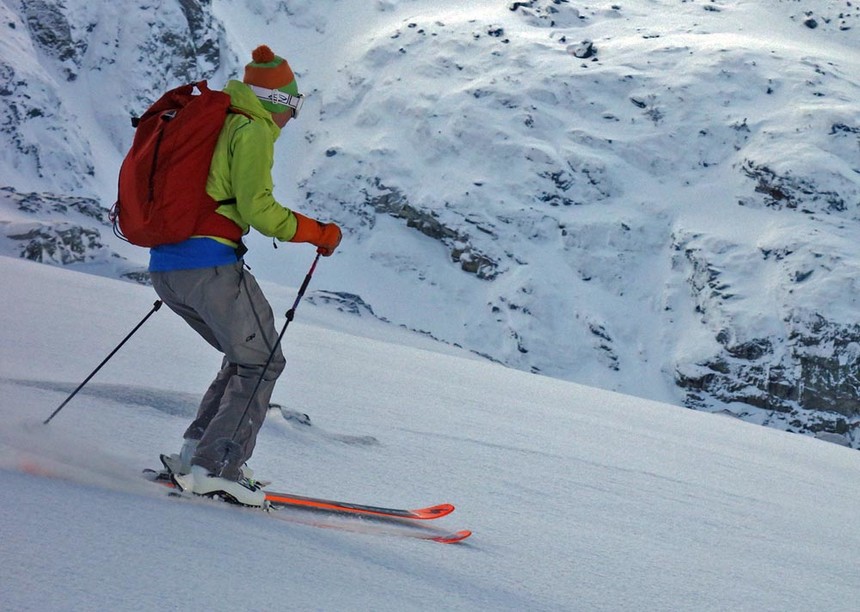 "This is the first light ski I've had the privilege of using that didn't get deflected all over the place in chop, crud or variable snow." Photo courtesy of Lee Lau.

This is the first light ski I've had the privilege of using that didn't get deflected all over the place in chop, crud or variable snow. Of course, the ZeroG 108 performed fine in soft snow but then, as a touring ski, it's supposed to work well in powder. What was remarkable was how well the ZeroG 108 felt on hardpack. Its remarkable edge hold and torsional stability had me looking down at my feet wondering if someone swapped some narrower carving metal topsheeted boards without my noticing.

The ZeroG 108 retails for $799.95, and comes highly recommended for those who go ski touring in order to ski lines aggressively, down the fall line, at speed while leaving their hippy-turning friends on soft skis in the dust.