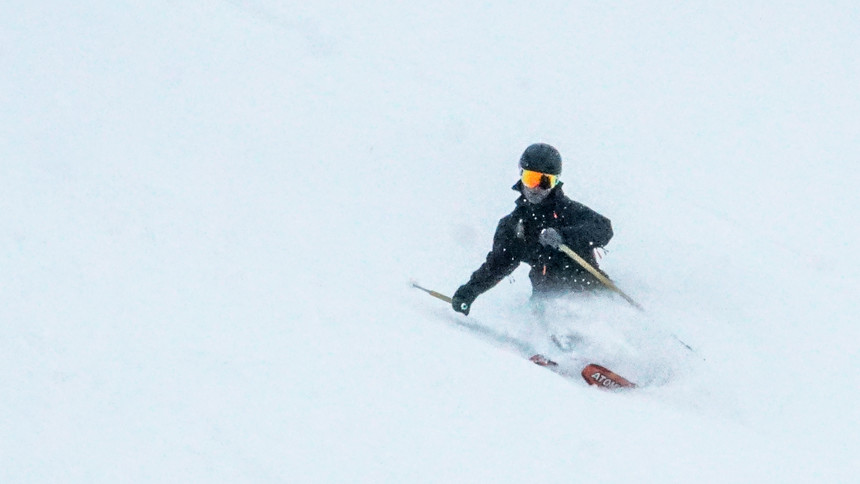 Atomic's Bent 110 will have you seeking out every pow stash you can find. | Andrey Shprengel photo.

Atomic’s Bent Chetler has got to be one of the most recognizable powder skis around. It’s dual-rocker design, colorful graphics, and freestyle-inspired shape have put smiles on the faces of skiers for the last 14 years. Designed and developed with legendary freeskier and artist Chris Benchetler, and skied by all manner of Atomic athletes like Amie Engerbretson, Nick McNutt, and Kai Jones, the line of skis (now just called the Bent) has evolved yet again. New is the 110mm-underfoot version, the perfect every day ski for playful freeriding both in and out of bounds. Light enough for touring, but powerful enough to charge inbounds, the Bent 110 might be the ultimate one-ski-quiver for those who like to slash, butter, and jump off everything in sight when the snow is soft. I put the new Bent 110 to the long-term test as my daily driver ski for riding Jackson Hole for the last few months, and am still blown away simply by how fun it is to ride. The Bent 110 will also be available in a new smaller size at 164cm this year to make the ski more inclusive and appeal to a larger audience of riders.

The new Bent 110 isn’t a radical departure from the existing Bent Chetler designs. In fact, it’s really just a narrower-waisted version of the original 120mm version with some slight changes to shape and construction to make it more appropriate for everyday riding. After years of skiing the big version, Atomic team athletes were delighted by the introduction of the Bent Chetler 100 a few years ago as a ski that could rip when conditions weren’t stellar. However, the 100 didn’t excel in deep snow and the 120 was a tool purely for the backcountry - there was a gap in the lineup for athletes looking for an everyday ski for those "in-between" days that make up the majority of our seasons out West. 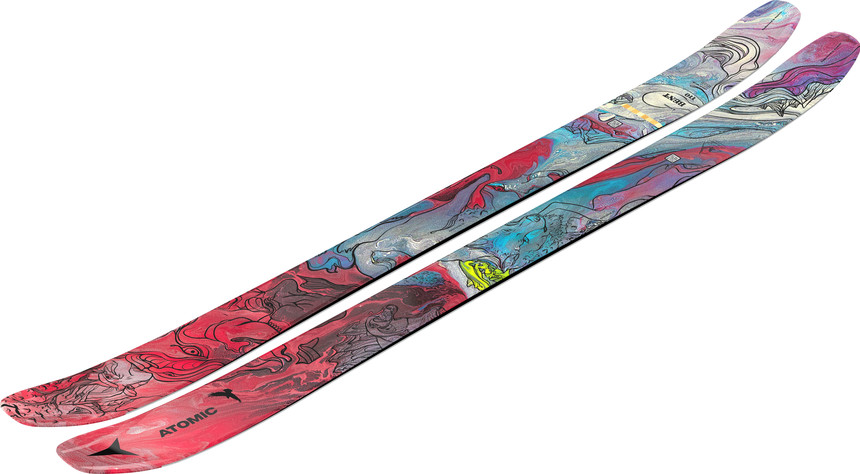 With a 19-meter turning radius (in the 188cm), a very pronounced and nearly symmetrical tip and tail rocker and a little bit of camber underfoot, the Bent 110 screams “playful deep-snow ski.” The freestyle-oriented shape is further enhanced by the flex pattern: soft tips and tails with a very stiff section directly underfoot. Inside is a poplar wood core designed to optimize weight without sacrificing shock absorption or stability. There is no metal in the core. The skis weigh in around 1870 grams, very light for a ski of this size, further adding to the playful nature of the ski. Finally, the HRZN Tech tips and tails allow the ski to plane and float more freely through the three-dimensional medium that is deep powder.

On snow, the Bent 110 is like an oversized and over-energetically puppy that just wants to play all day long. It can go as fast as you want it to, carrying you at speed from one air to the next, all over the mountain. Dropping into the steep terrain with lots of opportunities for airtime, like JHMR’s Alta Chutes zone, the ability to make quick turns and slarve through chalky snow is a feeling that really never gets old. The skis are able to make quick direction changes the way a reverse-camber powder ski can, but the camber underfoot actually bites when you lay it over on edge, giving you much more control - crucial for billy goating through chalky snow in technical terrain, hauling ass through trees, or when lining up your next sidehit air on the cat track back the lift. Speaking of those sidehit airs, it's phenomenally fun to load up the tails on the Bent 110, pop, and go huge, no matter the speed.

I wasn’t convinced that the soft (and light) tips combined with the tip rocker and taper profile would actually work to plow through crud and cut-up post-storm snow. Somehow, it works incredibly well, and the ski tracks predictably and powerfully through less-than-perfect pow. Perhaps it’s the stiff underfoot platform and the light-yet-damp Poplar wood core construction. Despite their playful nature, the skis provide a solid platform for making fast wide-open turns down classic runs like No Name Face or through the never-ending couloirs of Granite Canyon.

In untracked blower, the ski floats and slashes exceptionally well - nearly as well as the Bent 120. 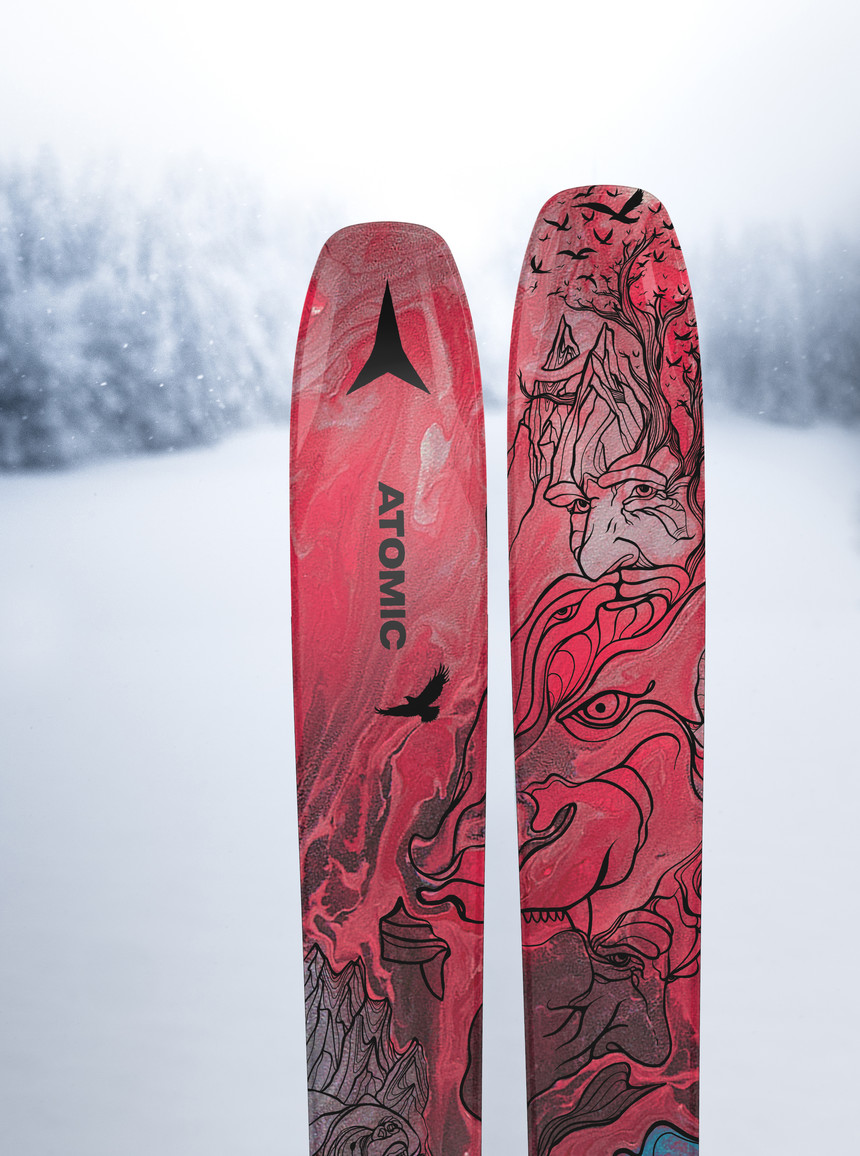 For a 110mm-underfoot powder tool, the Bent 110 can survive on hardpack. It wouldn’t be my first choice on days where I know it will be firm (I’d pull out something like Atomic’s Maverick 95Ti in that case), but it can still carve turns on corduroy on the way back to the chairlift. On hard snow, the huge amount of tip and tail rocker leads to the ski feeling very short, so straightlining on groomers can get a bit scary.

I tested the ski with alpine bindings, but wouldn’t hesitate to throw a pair of Shifts or even a pin binding to take them deep into the backcountry. The light weight and shape would make an excellent backcountry freestyle ski - or an everyday powder touring setup to bop around in deep snow on mellower terrain when avalanche danger is a concern.

Atomic hit the nail on the head with the introduction of an in-between waist width of their famed powder ski. For freestyle-oriented riders who also like to ski fast, the Bent 110 is the perfect combination of shape, weight, and flex, creating one of the most solid options for a one-ski-quiver we've seen in long time.

Wow, I can’t wait to try out the Atomic Bent 110! It sounds like the perfect powder ski for me. | www.pasadenaconcretepros.com

Stashing skis on your roof has never been easier with the Kuat Grip 6. | Kuat photo. Driving a small car in a mountain town is pretty sweet - the better gas mileage and the ability to actually fit into any parking spot are some bonuses - but it does come with a compromise. When you like to carpool to the ski resort, or even bring more than one pair of skis to the mountain, space can quickly become an issue. That’s where Kuat’s new Grip 6 roof rack comes in - the super-wide platform has