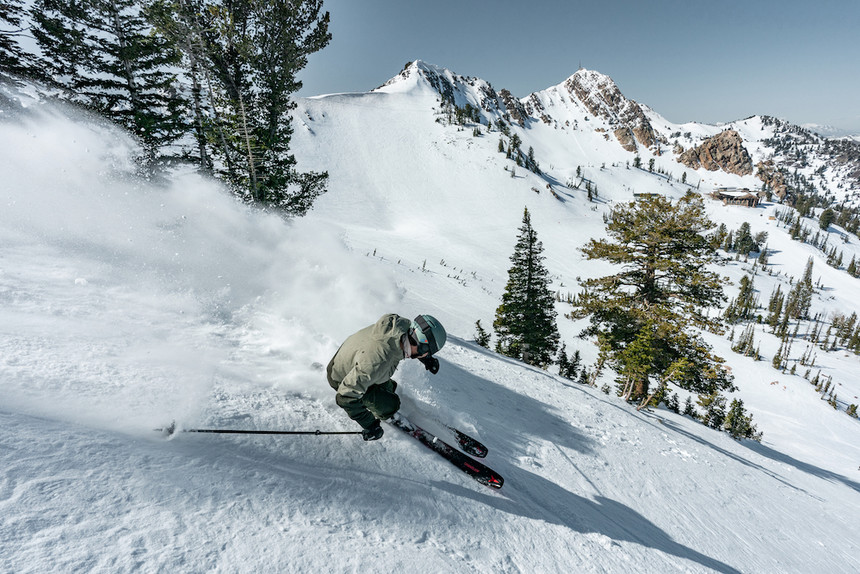 Charging inbounds through variable snow and on steep groomers is the Maverick 95ti's diet of choice. | Atomic photo.

As much as we might want to, we can’t always ride in perfect conditions. Take a season like the winter of ‘21-’22, where many western resorts struggled to keep terrain open due to a severe lack of snowfall - there weren’t really very many days when riding inbounds warranted a powder ski. Let’s face it: powder skis are super fun, but aren’t the best tool when it’s firm. Your knees and back will thank you later. I’ll also wager a bet and say that most of us don’t actually spend as much time skiing powder as we might think, and that’s totally fine. There are better tools for the job, something you’ll quickly learn if you’re ripping around on a ski like Atomic’s new Maverick 95Ti. Last year, we tested the Maverick 100Ti, which was a blast off-piste and on cut-up groomers. This year, we hopped aboard the slightly narrower and more aggressive Maverick 95Ti, a rocketship of a ski for charging on-piste. It’s the ski to grab for those bluebird mornings a few days after the last storm system trickled out and your local resort laid fresh cord down your favorite groomers.

Atomic’s Maverick 95Ti is billed as a narrow-waisted all-mountain ski, and all the measurements point in that direction. At 95mm underfoot, it’s definitely on the narrower side of things for an all-mountain ski, but with a healthy amount of tip rocker and bit of tail rocker, the shape toes the line between on-piste carver and directional freeride ski, promising hard-snow performance with versatility off-trail in soft snow. Unlike their Bent series of freeride skis, Atomic adds a layer of Titanal metal inside the Maverick, with the aim of adding dampness, stiffness, torsional rigidity, and shock absorption. That metal makes a big difference when skiing fast, leading to better edge hold, responsiveness, and stability. The tips feature Atomic’s 3D HRZN tech shape, adding 10 percent more surface area for deep-snow float and a less hooky feeling when initiating turns.

The Maverick 95Ti’s shape is very directional, with a 20/70/10 rocker profile: a long and low shovel shape, pronounced camber underfoot, and a bit of kick in the tail. Compared to the older Atomic Vantage skis, there’s much more tip and tail rocker, but that strong camber profile is still there - these are meant for skiing hard inbounds, after all. The ski’s tip is pretty soft, but stiffness ramps up quickly as you get closer to the binding, and finishes with a powerfully stiff tail.

The recommended mount point is fairly far back on the ski, roughly around 9cm back from center. There is a little room for experimentation here - I mounted my 188cm test pair at 2cm forward from recommended with the intention of making the ski a little more playful.

After an abysmal snow year last season, Jackson Hole’s ‘22-’23 season has been off to one of the best starts we’ve ever seen in a while, ironically not the conditions that beg for a narrow-waisted on-piste ski. However, the frequent snowfall made for phenomenal groomer skiing, and hot laps under JHMR’s Teton and Casper lifts never get old.

At 188cm, the Maverick feels like a lot of ski and requires a dynamic and powerful skiing style, but it’s the kind of ski that gives back what you put in, and more. In other words, it’s an energetic charger with a need for speed that will respond instantly to direction changes and other rider inputs. However, with the subtle tip and tail rocker profile, it doesn’t have that locked-in, “on-rails” feeling that more traditional carving skis have. The edge hold is there, but it’s easy to release and toss around. Want to throw them sideways mid-run and kick up a bunch of snow, slash over a roller, or even ski switch for a few turns? Go right ahead - the Maverick 95Ti will happily play along. 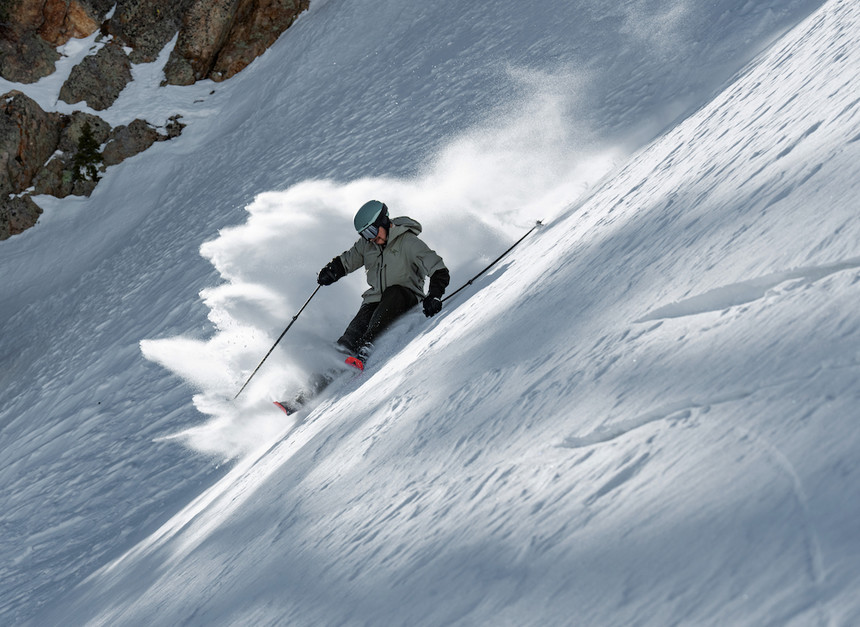 While it's not a deep-snow tool, the Maverick 95ti makes easy work of chalky steeps. | Max Ritter photo.

Off-piste, the soft tips allow for easy turn initiation in three-dimensional snow, but the stiff and energetic nature of the ski keeps you honest in bumps and trees. Stay forward and really pressure the front of the ski, and it will come around the fall line very quickly and pop you right into your next turn. That also holds true in smooth, chalky steeps: stay on the ski and will do exactly what you want it to, but it can take a little work to get used to.

For those days mid-high pressure cycle when it’s time to dig deep for stashes or when you just want to tempt fate with the speed wranglers on smooth groomers, the Maverick 95Ti is like a finely tuned race car. While much more accessible than the Vantage series it replaced in Atomic’s lineup, it rewards aggressive skiing in all manner of terrain. Looking for a narrow ski to add to the quiver for resort riding around the West, or want a do-it-all hard snow ski to relive your ski racing glory days? The Maverick 95Ti is for you.

Get the Maverick 95Ti here.

Stashing skis on your roof has never been easier with the Kuat Grip 6. | Kuat photo. Driving a small car in a mountain town is pretty sweet - the better gas mileage and the ability to actually fit into any parking spot are some bonuses - but it does come with a compromise. When you like to carpool to the ski resort, or even bring more than one pair of skis to the mountain, space can quickly become an issue. That’s where Kuat’s new Grip 6 roof rack comes in - the super-wide platform has

The Suunto 9 Peak Pro is a powerful little watch for mountain sports. | Max Ritter photo. Sports watches aren’t all made the same. Just like any other electronic device, manufacturing these things isn’t exactly great for mother earth - but Finland’s Suunto is trying to combat that by creating the new Suunto 9 Peak Pro with 100% renewable energy and have its carbon footprint calculated and then fully compensated with Verified Carbon Units through Tree-Nation. According to the brand, during