Editor's Note: This is part of TGR's ongoing column Base Camp, which will explore the places different people in our industry call home. Whether van, house, or shack, this series will not only focus on the dwelling but how this place is a direct representation of the characters who live there. 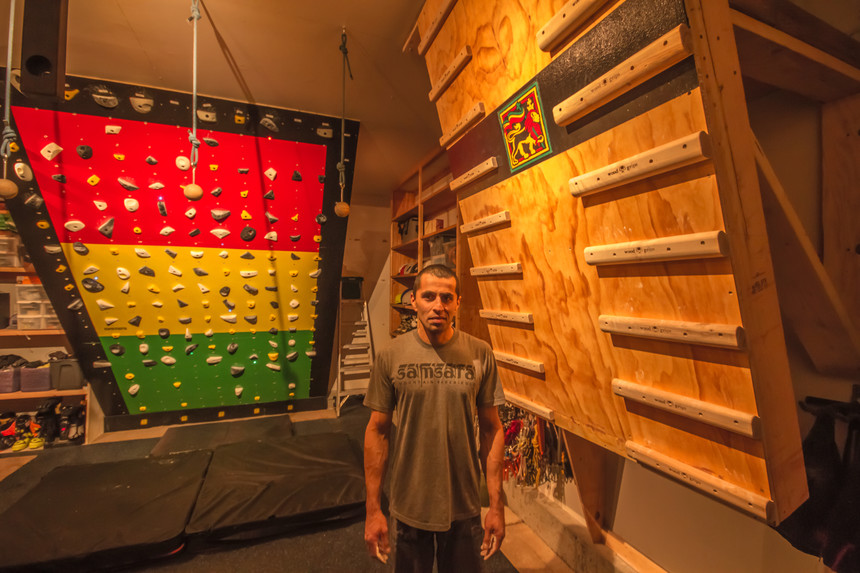 Zahan Billimoria's livelihood requires him to be at the top of his game, so he turned his garage into his "dojo." Quinn Banks photo.

As you may recall, we here at TGR are quite fond of mountain guide/coach/mountaineer/all-around badass Zahan Billimoria of Exum Mountain Guides. Billimoria has been working for over a decade keeping athletes, filmers and vacationers alike safe in the Tetons, while ticking off a hefty list of impressive accomplishments on his own, including a 12-hour round trip ascent of the North Face of the Grand Teton.

As a former member of the U.S. National Ski Mountaineering team, Zahan understands the importance of training for a life in the mountains. And that's why the man known as "Z" went above and beyond to transform the garage of his house in Jackson, Wyoming into a mountaineering training mecca, replete with a moon board, climbing power balls and more mountaineering gear then your local ski shop.

We caught up with Zahan to talk about what it was like to turning his garage into a climbing and training oasis. 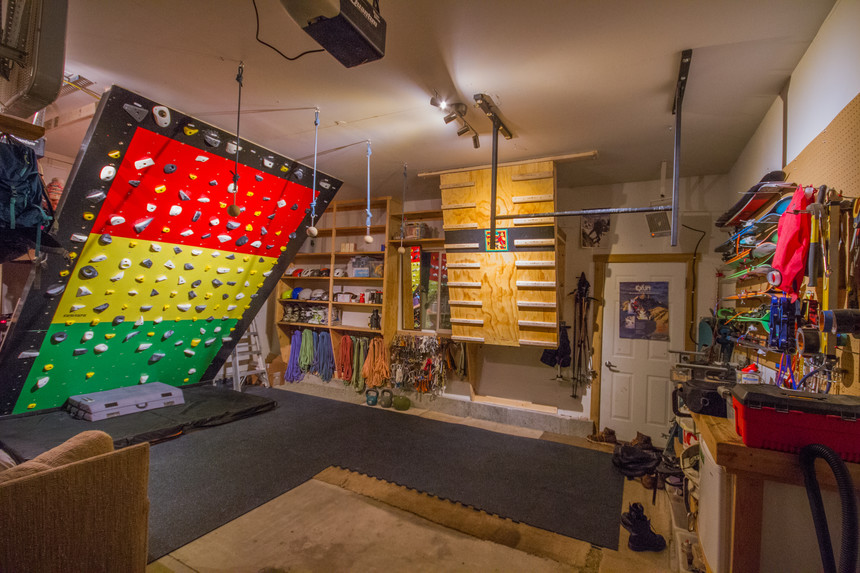 TGR: To start, how long have you been guiding for?

ZB: I’ve been guiding for just over 12 years. I started right before my son was born. I grew up in the Alps in Switzerland, surrounded by mountain culture and guides, so I was always drawn to climbing even though my parents weren't into it.

When I was 18, as a graduation gift, my parents hired a guide for a day and told me to go enjoy a day in the mountains. I ended up going out with this legendary French climber named Christophe Profit, and pretty much as soon as I had that experience I was like, "This is what I want to do with my life."

So let's talk about the gym. Why did you decide to turn your garage into a climbing gym?

ZB: Jackson, ironically is a hard town to be a climber in. There's not a lot of hard rock climbing–there's a lot of alpine climbing, but not much rock climbing–and five years ago we lost the climbing gym in town.

That made things much more difficult for me, and training has always been a part of my life. I like feeling fit and strong in the mountains. I coach, you know, it's what I do for a living now, so I'm really passionate about being able to do whatever it takes to help me accomplish those goals. Changing my garage up was one of those things.

How do you even start on a project like this? How long did it take?

ZB: Well, I used to train in my basement where I had a few basic training tools, but I had tapped out all the space down there. And I only knew I wanted a few things. I knew I really wanted a moon board–that's what I wanted to build around. So figuring out where the moon board would go–it's 12 feet by 8 feet–that was what came first. And then once you know where that is going, you need to realize when you come off the moon board you come screaming off it and can cover a fair amount of ground, so you need an open area to fall. Once I figured that out, I just kinda drew up the plans on a napkin and went at it. 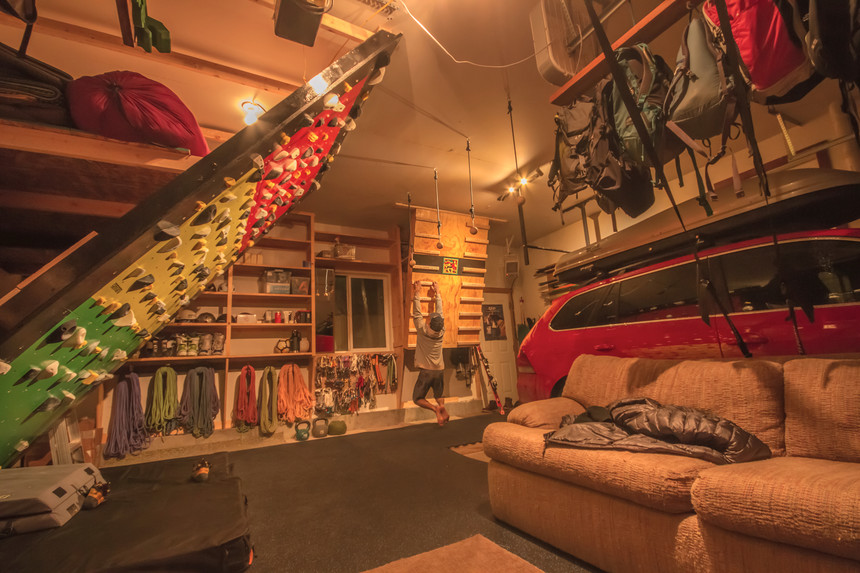 It might not be overly spacious, but it gets the job done. Quinn Banks photo.

So, over Thanksgiving I just did it. It took just under three weeks, with a solid 14 days of working everyday, and then there are some things that took longer cause I was waiting for parts to come in. But a good carpenter could have done it in half the time though.

What was the biggest challenge in construction? How much did the entire project cost?

The campus board was pretty tricky because you can't attach it to the wall–the bottom has to be three feet removed from the wall, and it has to have a 15 degrees from vertical and really strong. So I have it supported by a kickboard. The moon board is big but it's actually pretty easy to install as it's just one consistent angle all the way from the floor to the ceiling.

Do you have friends who are constantly bugging you to come over now?

ZB:  [Laughs] Yeah I have friends that come over and that’s super fun, and we have a good crew that will stop by in the evening and crush it on the moon board. I kinda call it my dojo. 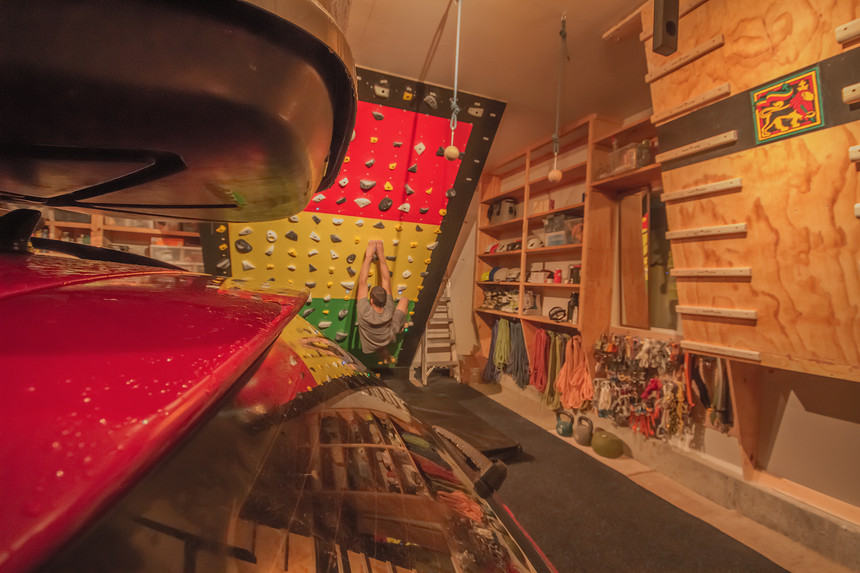 It's not often you have to share real estate with a station wagon at a climbing gym, but where's the fun in that? Robert Pursell photo.

But honestly, my kids hang out and play here more than I do. They love coming in here and crawling all over the place, doing gymnastics and what not.

This place kinda looks like a gear locker. If you had to guess, how many pairs of climbing shoes do you own?

ZB:  I don’t know, a lot. Maybe a couple dozen? I have friends who always forget their stuff here, and some of that eventually adds to all the stuff you see on the shelves in here.

Outside of that I have four or five pairs of touring boots and all my ropes. As you can see, everything is arranged in a specific fashion–I am from Switzerland, after all. I have the skinny ski mountaineering ropes on the right, then the short and half ropes and then the full-length climbing ropes on the left.

Do you feel any itch to add to the gym?

ZB:No, not at all. I have no passion for building, I'm just competent enough to do rough work like this. I don’t love the process of building and I'm not great at it. This won't be some constantly growing project. 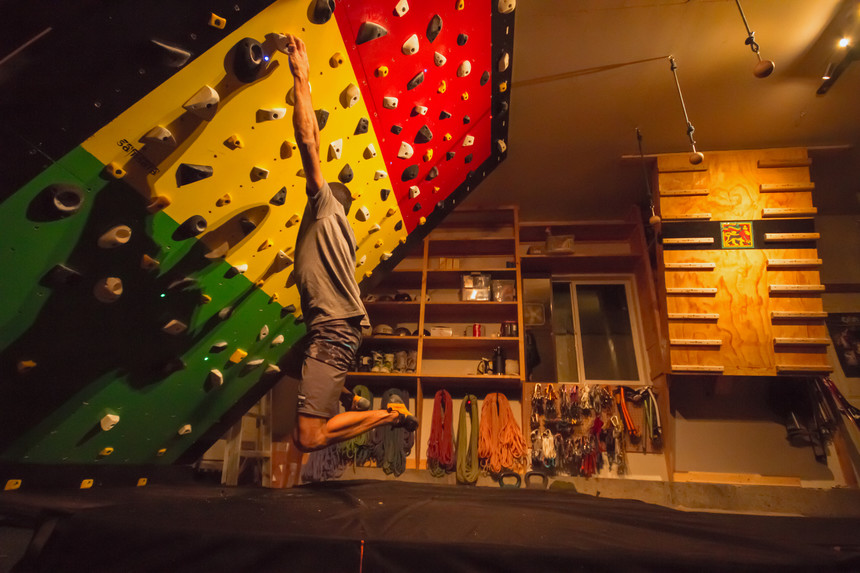 Finally, any advice for someone thinking about trying to build their own climbing gym?

So, I would say, if you've never built something hire a fried who knows how a house is built–how walls are layered and where studs are–and have them give you some advice and leadership.

And, in the end, my best advice is don't be afraid to give it a whirl.

You might be hacked, someone you know, someone you are close to, maybe your spouse has all your devices bugged, or that workmate that seems to be one step ahead of you might be using that spyware trojan on you. its possible you don’t even know this because there a spyware that would just sync with your phone even though you might be losing battery, files, speed and data on your device. Be sure today by contacting rootgatehacks dot com. Mail is contactATrootgatehacksDOTcom

Picture this: Nancy Pelosi and Newt Gingrich sitting side by side and asking you to care about climate change. Sounds like an SNL skit right? Except it’s not, you can watch the real advertisement here. Climate change didn’t use to be a divisive issue in America, in fact, many members of the Republican Party used to support climate change action. So what changed? The podcast How to Save a Planet set out to discover why, and in this episode, they explore how conservative ideals became