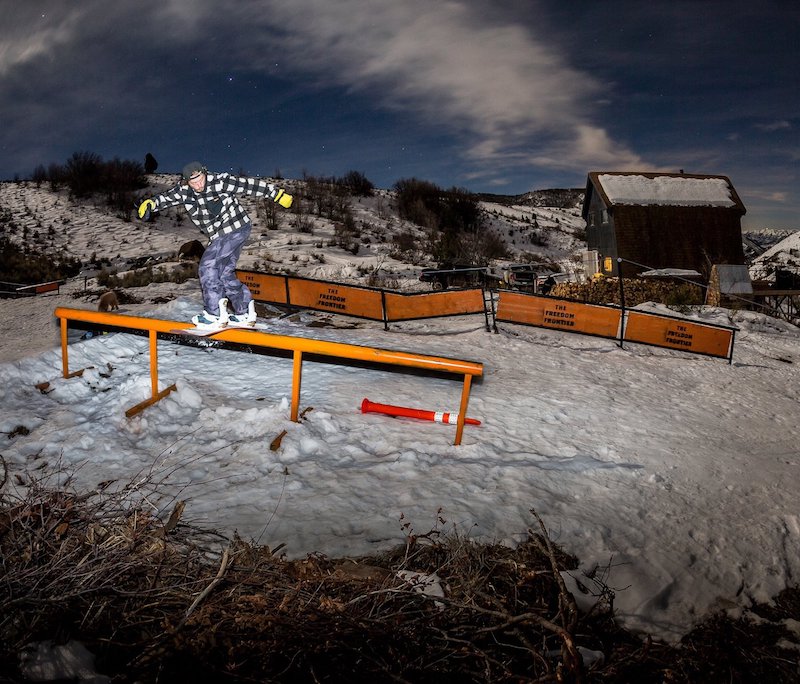 Many outdoor enthusiasts have at one time or another fantasized about having an outdoor Shangri-La, a place to dream up, build, and enjoy whatever the heart desires. From private skate parks to off-the-grid cabins, for those willing to invest the time and finances, building a shred oasis can be accessible to a multitude of budgets.

While the most well-known snowboard wonderland might be the DC Mountain Lab, Ken Block’s high-budget and defunct haven, over the last several years a more minimalist approach has been taken by those wishing to build their own interpretation of the dream property. From Tim and Hannah Eddy’s Childerness to Mike Basich’s Area 241, snowboarders are taking an approach that depends more on ingenuity and less on massive budgets.

When Salt Lake City-based pro Chris Grenier and Burton Ambassador of Stoke Alex Andrews decided to team up and buy some land deep in the Wasatch, it was inevitable that the duo would eventually build some rideable features. However, what has transpired since the two friends and supremely talented snowboarders procured what has been dubbed “The Freedom Frontier” is truly remarkable. 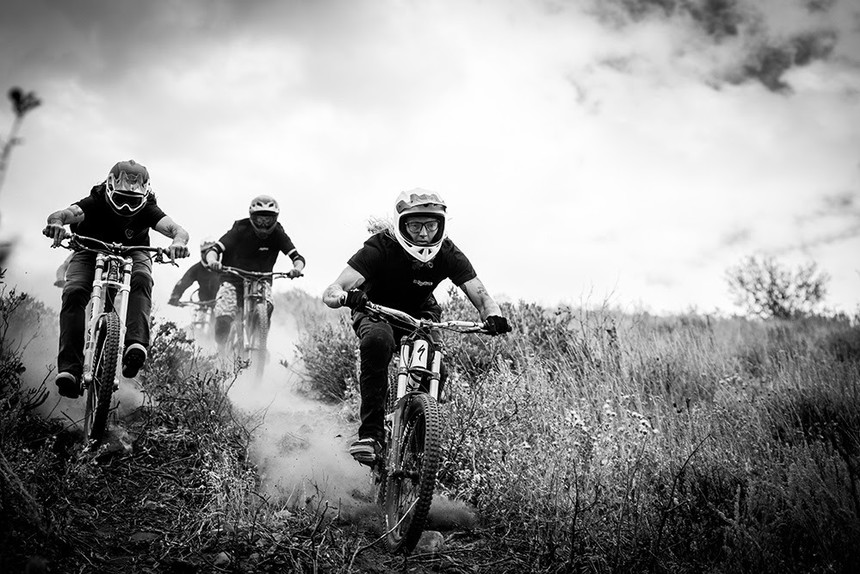 “At first I was just looking for land with plans to park or build a tiny home or something of that nature,” explains Andrews. “The stars aligned and I was able to find this small cabin in northern Utah, it’s one hour from Salt Lake City with five acres on a perfect pitch.”

Knowing it might not be financially viable on his own he reached out to longtime friend and Salt Lake City local Chris Grenier. Grenier is one of snowboarding’s most colorful characters with an impeccably smooth snowboard style, an infectiously positive attitude, and plenty of rambunctious energy, and was Andrews’ first call when it came to splitting the property.

“After that first time scoping the property I knew I had to have it,” enthuses Andrews. “Long story short, I didn’t qualify for a loan. Chris has been a longtime friend of mine, and we were chatting about the spot, and I mentioned we should check it out together. The next day we went up to check it out. It was rad because we had the same vision of what we both wanted from the cabin.

“Having him as a partner on the whole thing has been radical and looking back I’m not sure it would have been as fun without him by my side,” Andrews says. “It’s been a lot of work, but as a team it’s made it feasible to accomplish the things we have up there! I couldn’t have a better friend to share the place with.”

After securing the cabin, Andrews and Grenier started brainstorming about what was possible on the property and immediately got to work building their first features. They initially made some upgrades to the cabin and as fall transitioned into winter they set about building the initial snowboard line, which included a lawn mower powered rope-tow that Andrews made. 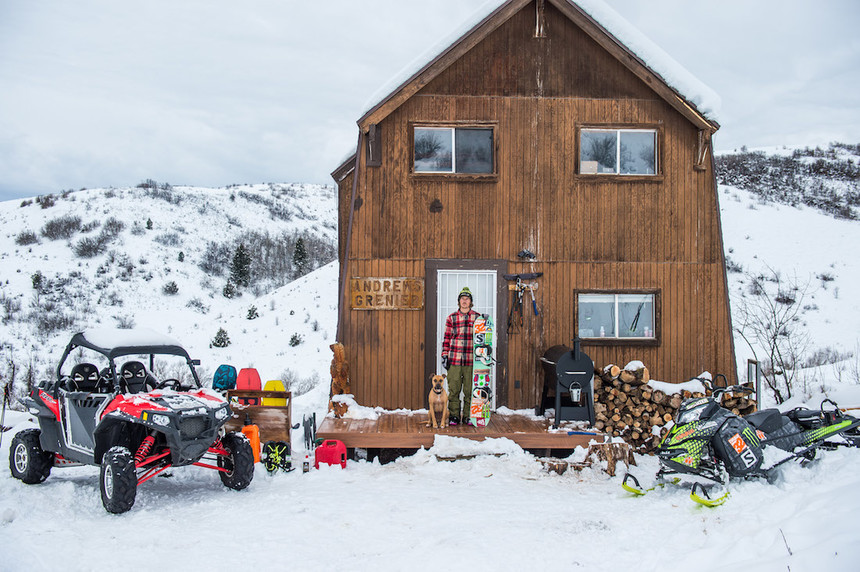 Grenier brought all of his favorite toys to the cabin. Tom "T. Bird" Monterosso photo.

“The first thing we built was the deck, it had a small weathered deck that we wanted to expand so everyone could be outside comfortably enjoying the view,” states Andrews. “While we were building the deck I started to envision how a skate park could fit into the mix. I really wanted it to feed off the deck, so I started moving Earth to shape quarter pipes and get a general layout. That summer we let it sit as dirt and winter moved in fast, that’s when I built the rope-tow lawn mower and we put the skate park on hold till the following summer.”

While the skate park got put on hold, The Freedom Frontier saw a heavy cast of shredders that first winter as a number of Salt Lake City’s biggest pros sessioned the park. It became a retreat from the often hectic terrain parks that surround SLC. Friends of Andrews and Greiner began flocking to The Freedom Frontier, with world-class mountains at their disposal it wasn’t necessarily the relatively rudimentary private terrain that was a draw to the Frontier–the lack of connectivity at The Freedom Frontier offered a setting for digital detoxing, a benefit that quickly outweighed the private terrain.

“Being able to disconnect was something we were stoked on initially, but didn’t realize how much we both needed it until we experienced it,” Andrews tells TGR. “I’d say out of all the activities and rad stuff we got going on at TFF, being disconnected and living in the moment is by far my favorite. Spending quality time with friends and family, having genuine conversations, playing cards, talking shit, making food, and just relaxing is what makes the whole thing worth it.”

After the inaugural winter the real work began. Andrews, Grenier, and a large crew of friends began pouring concrete, clearing trials, and fabricating new snowboard features. The results has been one of the most amazing transformations in snowboard fantasy house history. The crew built a full cement skate park with a perfect blend of transition and street features, mountain bike trails with plenty of air sections, and an upgraded rope-tow made out of an old Ford F-150 that Andrews and Grenier winched up a precarious hill on the property. 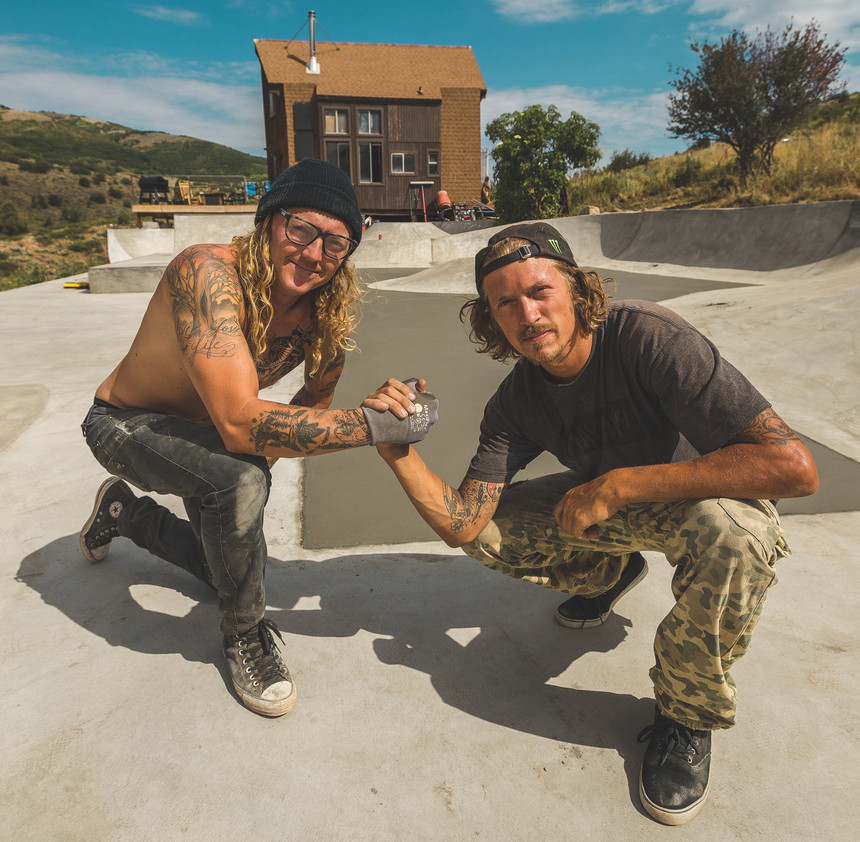 Grenier and Andrews are down for life. Scotty Arnold photo.

And while The Freedom Frontier is pretty spectacular as is, Grenier and Andrews say they are just getting started.

“We have some plans to build some sort of hot tub, most likely wood fired, and I also want to build a garden, and expand the mountain bike trail extensively,” explains Andrews. “We also need to figure out our water situation. That’s probably my biggest project I’m taking on this summer, we have a well and water, but it needs to be freeze proof for winter, and needs to be re done from the cabin to the tanks. It’s all a learning process, but part of the fun.”

The cabin has caught the attention of ESPN and the sports network has worked with the Andrew and Greiner to document the process of building The Freedom Frontier in a series called The Cabin Report. Greiner who has competed in and won gold the X Games Real Street series worked with the crew at X Games to produce the new series, a portion of which premiered on ABC’s World of X Games in February.

“Chris really lead the charge on all of that, I’m really proud of him and what he accomplished,” states Andrews. “I was obviously a big part of that, but Chris handled so much backend getting our show on their platform. Loren Brinton who filmed, edited, and produced the show was our saving grace. We had the idea and wanted to document it, but having his eye and talent behind the lens really pulled the whole thing together. We have been super stoked on the turn out and hope people enjoyed it.” 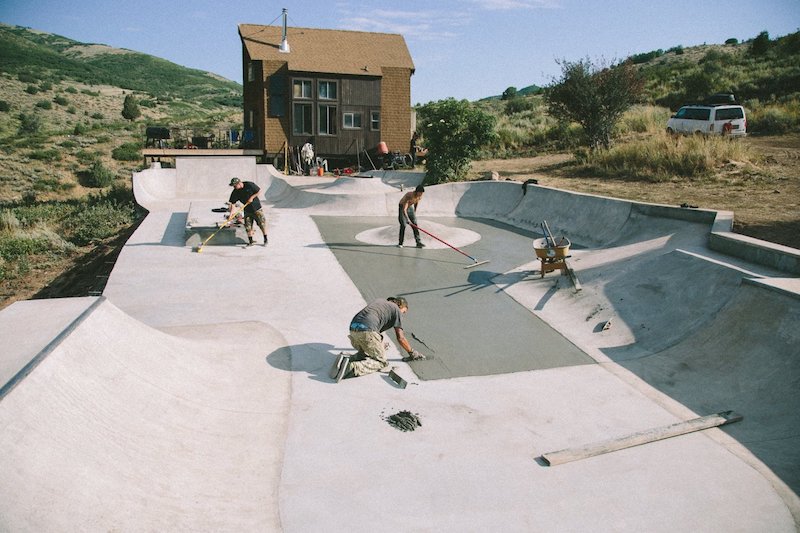 Andrews and Grenier get by with a little help from their friends. Jeremy Jones photo.

With Andrews and Greiner's unrelenting enthusiasm and ingenuity, the possibilities are endless. Andrews positivity is infectious and watching he and Grenier’s creativity come to life is a special treat for snowboard fans everywhere. 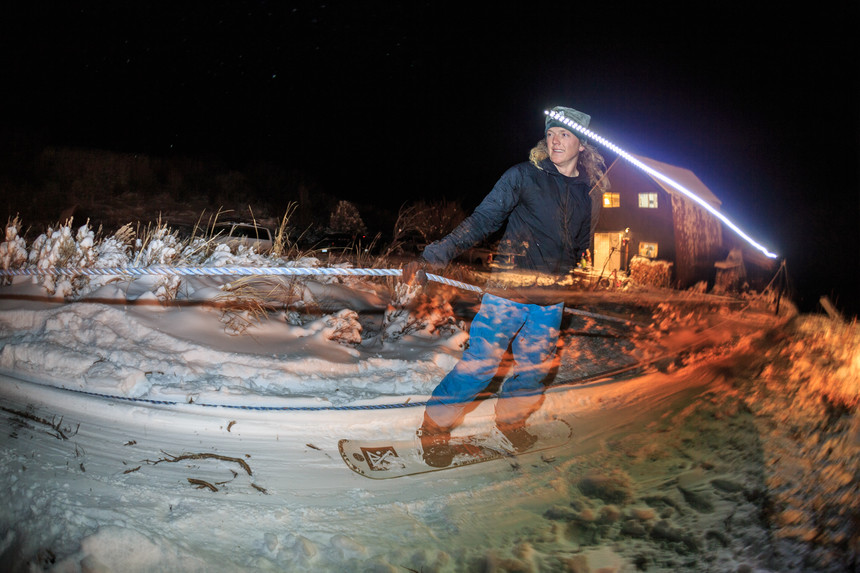 Andrews enjoying the fruits of his labor. Scotty Arnold photo.

“Our ideas are endless, and making a full film would be awesome,” enthuses Andrews. “The future for The Freedom Frontier is to enjoy it! The whole reason we got the place was to escape, and just shred with our friends. Hopefully we will have a better snow season next year and can take full advantage of the rope tow and terrain nearby.”

There are some fascinating deadlines in this article but I don’t know if I see all of them center to heart. There is some validity $1 hosting godaddy but I will take hold opinion till I look into it further. Good article , thanks and we would like more!

I love how Chris and Andrew made such a beautiful act. I’m such a fan of how they enjoy doing snowboarding. Hope to see them soon and have my skateboard signed. concrete contractors charleston sc

This is a great story!  I love how they followed their passion.  orlando pool fence