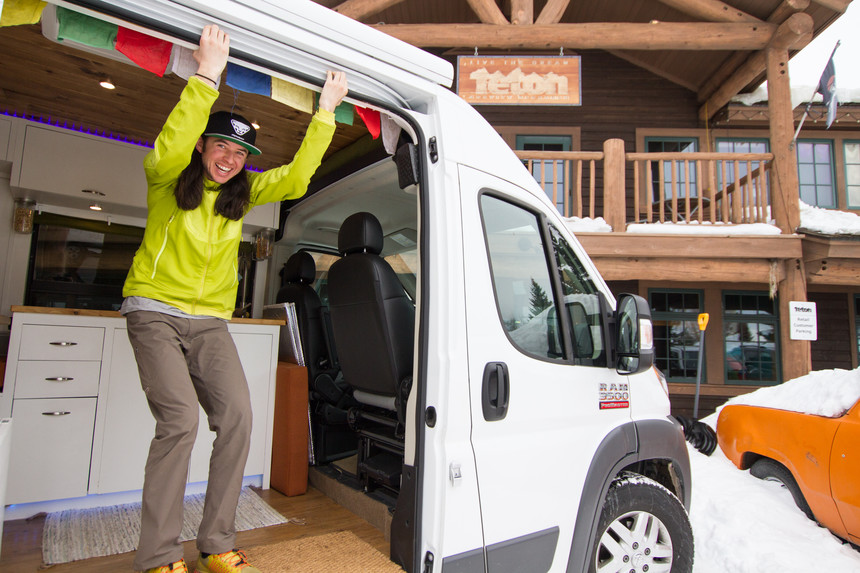 I met Thomas Woodson in a parking lot after he invited me into his big white van. Ok, not THAT type of van. And, for Thomas, business meetings in parking lots are the norm, and it's not because he’s a drug dealer. He just lives and works out if his van. I don’t know if you’ve heard of it? It’s called vanlife and Woodson is doing it right.

Woodson’s 2016 diesel Dodge Promaster is built out to the nines. If you don’t believe me, check out all the photos because I’m incapable of describing its perfection. It has everything you’d want in a van you’re going to live in — insulation, a safe heating system, refrigerator, pump sink, stove, and curtains (#privacy) — but it’s just better than most camper vans out there.

In Woodson’s van, there are no bins overflowing with dirty socks, shoes, ski pants, and other miscellaneous items. Everything has a cabinet. The kitchen is immaculate and the stovetop is clean. It has things like birch countertops, a booth-style seating area that seats six, a shelf decorated with succulents, a reading nook, and a projector so he can screen movies on his seamless white walls.

The look, feel, and efficiency of Woodson's home on wheels aligns with his eye for composition and design. 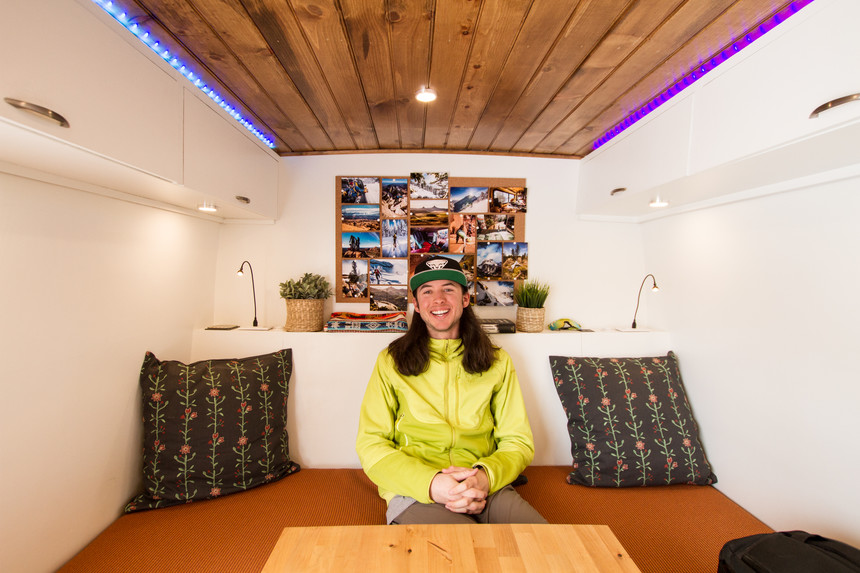 Oh, the symmetry. The seat cushions are waterproof but still somehow soft, and the LED lights shine in just about every color, and there is a wall between his "living room and "garage". Leslie Hittmeier photo.

When I stepped into his van for the interview the first thing I noticed was that it was warmer than my office. The floors were also cleaner and the seating area was 10 times more comfy than my desk chair (sorry TGR). Woodson put on some Toots & the Maytals, un-dimmed the lights, and grabbed his coffee.

The minute he closed the sliding door, I forgot we were in a van.

Woodson is a 25-year-old adventure photographer and videographer. He consistently shoots for outdoor brands like Outdoor Research, Dynafit, and Yeti Cycles. As far as his career goes, he is doing exactly what he wants to do — and his methodically crafted vanlife just might be the reason why. 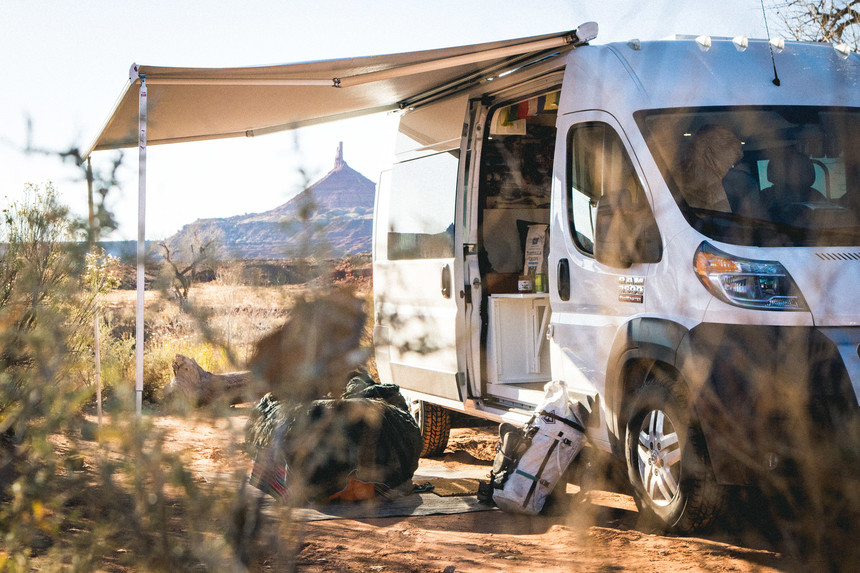 Woodson and his van in Indian Creek. Thomas Woodson photo.

Woodson spent the first 21 years of his life in South Carolina. Growing up, his dad would take him out West to go skiing every winter. So it was no surprise to his southern family when he packed his bags for Boulder, Colorado four years ago with the goal to become an adventure photographer. Upon arrival, he landed a nine-to-five at a graphic design studio. “I knew that I couldn’t just graduate from college and be like, ‘I’m a photographer now, hire me’ so I used graphic design as an avenue,” Woodson told me.

Woodson is a quick learner and a master of shortcuts (he graduated college a year early) and he jumped right into the Boulder scene. He made friends right away and honed above-average skills in rock climbing, mountain biking, and backcountry skiing in record time. Within his first year of being in the mountain-obsessed town, he was on his way to Peru to carry pro mountain biker and filmmaker Joey Schusler’s tripod on an expedition.

When Woodson got back from the trip, his life was completely changed. He signed up for projects with multiple outdoor brands and his office job was overshadowed by shooting bike edits for Smith Optics and photos for Yeti Cycles. He started pitching more and more projects and creating work for himself — the definition of self-made. And pretty soon, Woodson had enough work to justify quitting his office job. 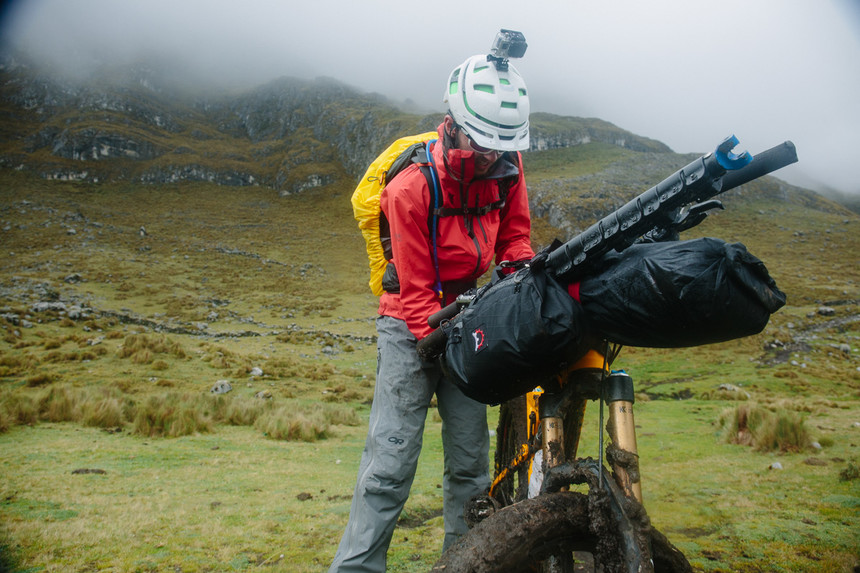 That's when the van came in. “There was one summer before I bought the van where I was in and out every week, paying rent but living out of a duffel bag, and I was like screw this I should just live in a van,” he said.

Woodson purchased and built out his first van in 2014. It was a Ram Promaster 1500—basically just a smaller version of the van he has now.

Fully committed to vanlife, but being a forward thinker, Woodson also planned for a way out. A year after buying the van, he sold it for more than he bought it for. He could do it because a lot of people out there want a nice camper van but don’t want to have to build it out, so they’ll pay more for one that’s already done. And they’ll pay even more for one that’s built out as nice as Woodson’s. 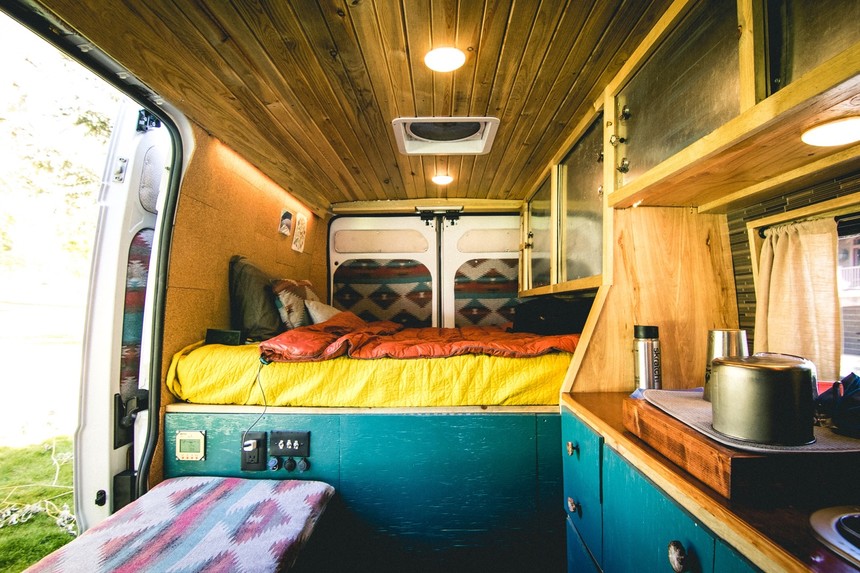 “I’m just flipping one van a year, living off nothing, and whenever I get sick of it all and want to settle down I can cash out of the whole thing and put a down payment on a house,” Woodson told me. “Or if I can do another van or two and I can skim the profits enough to get a first-time homebuyers type of loan and I’ll buy a place that I could rent out while still living in the van. Then I’m building equity in two things.”

The coolest part about it all is that, for Woodson, vanlife isn’t just about investing in his future — he also just really freaking loves the lifestyle. 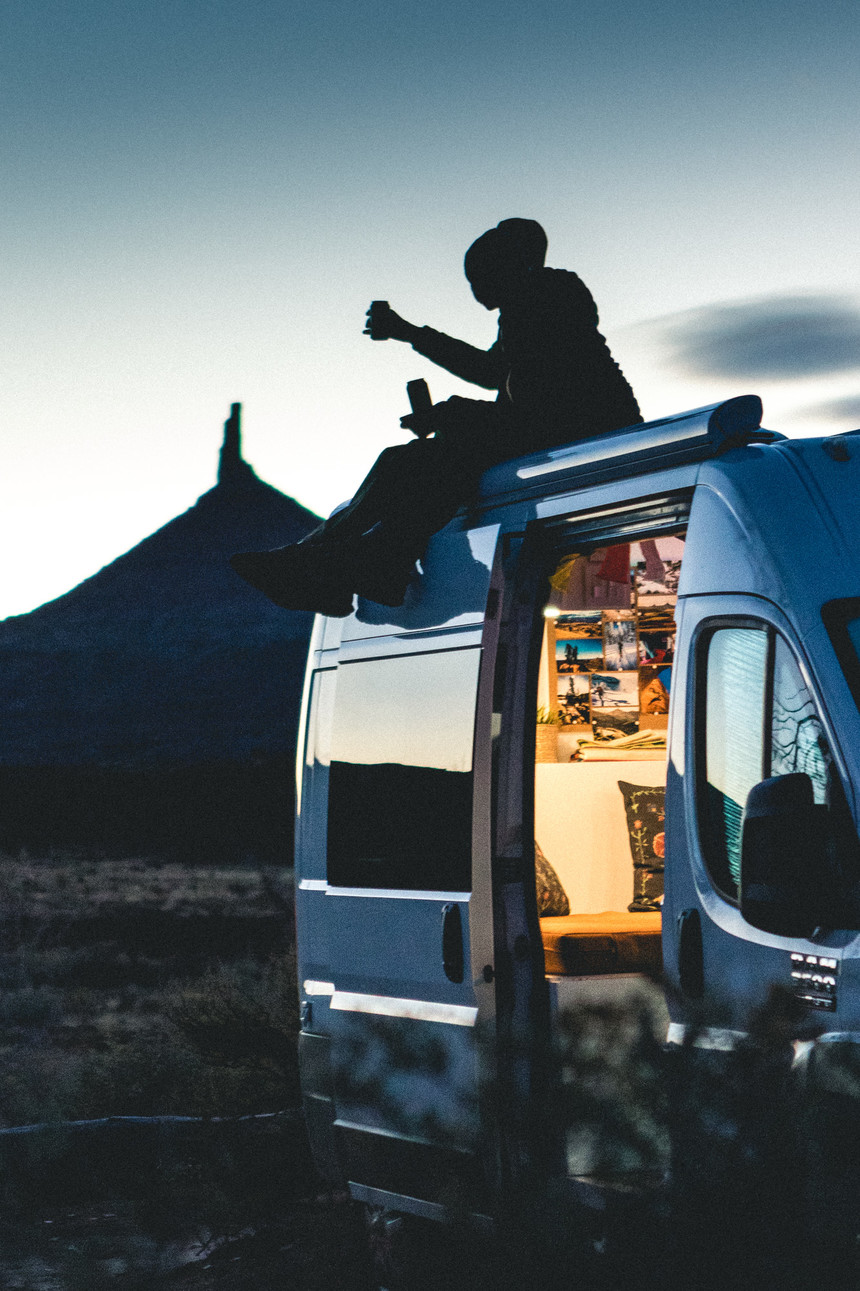 Woodson can risk being a freelancer in a competitive industry with inconsistent paychecks because his living expenses are almost nothing. And he loves the simplicity of his life. He owns three pairs of pants and four pairs of shoes (ski boots not included). He enjoys the challenge of the van, and the fact that it forces him to come out of his introverted shell and meet new people — he pretty much can’t drive away from a trailhead without some stranger asking for a tour. Also, he is forced to reach out and meet new people when he's in a new place because if he doesn’t, he might not get to go skiing or climbing that day. And lastly, the van is a career investment. “If I wasn’t living in this van I would have never met you to do this story,” he pointed out.

But his absolute favorite part of living in a van is that there are no bad seasons.“I chase the weather so I literally have good day every day. I’m here in Jackson for the middle part of winter when the skiing is phenomenal, except it’s been a little cold so I’m going to go back to Boulder in a few days. It’s 50 degrees and sunny and I’ll be able to mountain bike. Then, this spring I’m going to the desert to rock climb. I have total control over my environment. And it’s kind of ridiculous.” 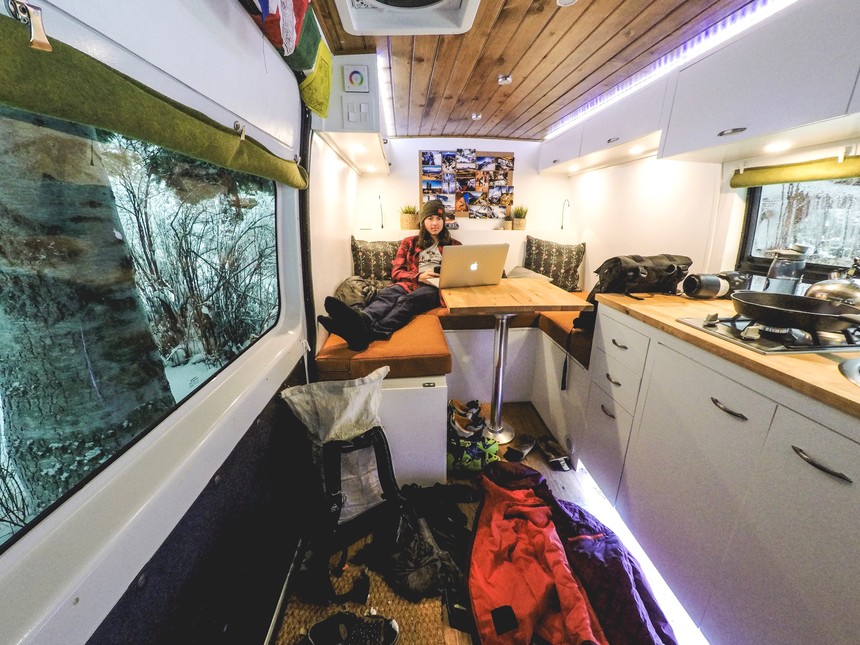 Woodson just got back from a trip to British Columbia. He was there shooting a short film with pro skier Rachel Burks and mountain guide extraordinaire, Jess Baker. He’s going to spend the next couple months editing the video. Then, who knows? That’s the life of a freelancer and he loves it. He has goals of creating work that showcases why public lands are so great, but he mostly just wants to inspire people to try stuff.

“Because if you try stuff," Woodson said, "you might just end up skiing all over the world, living in a van, and taking pictures for a living.” Why, I bet he’s got his own kumbuchi maker installed!

there are currently thousands upon thousands of solid, unassuming good people who, thank god, will never see this.

i will vomit for all of them,

Picture this: Nancy Pelosi and Newt Gingrich sitting side by side and asking you to care about climate change. Sounds like an SNL skit right? Except it’s not, you can watch the real advertisement here. Climate change didn’t use to be a divisive issue in America, in fact, many members of the Republican Party used to support climate change action. So what changed? The podcast How to Save a Planet set out to discover why, and in this episode, they explore how conservative ideals became