Editor's Note: In this early Winter installment of Ski Town Caricatures, we turn the TGR lens on the fabled Dirtbag. While some people are forced into a lifestyle of homelessness, the Dirtbag chooses to live without a permanent abode for all sorts of reasons, like saving money, ease of travel and of course the raw sex-appeal that goes with inviting someone back to your station wagon. Maybe you’ve done a Dirtbag tour of duty, or perhaps you’ve had one of these vagrants occupy your residential neighborhood. Either way, the Dirtbag lifestyle is worthy of everyone’s admiration and respect. After all, these folks have mastered the art of discomfort.

The Dirtbag—coming to a neighborhood near you. Ryan Dee illustration.

As fall fades and snow paints the landscape, countless mountain folk begin to feel the existential tug of winter. But there’s one type of outdoor enthusiast who’s commitment trumps all the rest. Masters of the art of discomfort, these individuals are known by many names: vagrant, gypsy, transient, bohemian, but most of the time, these restless wanderers prefer their given moniker: The Dirtbag.

Styling out destitution like a badge of honor, poverty hasn’t looked this good since the Buddha hunkered down under his Bodhi tree.

Adaptable in the extreme, the Dirtbag reacts to seasonal changes, dressing and recreating accordingly. Yesterday, it might have been a peak-bagging mission, but today, conditions on the ground dictate other priorities—the only constant is the unwavering dedication to the pursuit of fun.

Homeless, tireless, and never willing to pay for a hotel room, these scrappy life-hackers create a whole lifestyle out of improvisation and not playing by the rules. Experts in life’s little shortcuts, these innovators are at once everywhere and nowhere, established and unsettled. After all, when is on wheels, can you ever truly be lost?

After an intense biological study, we’ve put together a list of tell-tale signs that will help you—the TGR readership—identify the Dirtbag during the coming onset of winter. 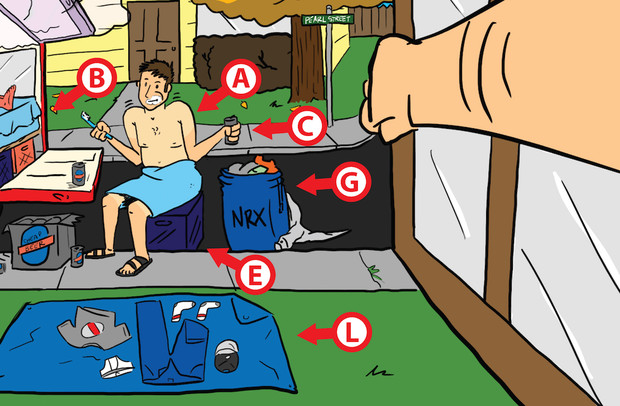 The Dirtbag getting borderline-creepy while brushing his teeth and drinking beer on your front lawn. Ryan Dee illustration.

Dependent on atmospheric conditions, the Dirtbag is famous for a willingness to deck change just about anywhere. One of the byproducts of living out of an automobile is that the Dirtbag has very little privacy getting into and out of wetsuits, ski gear, Snuggies, costumes, etc....Whether it’s at the trailhead or in front of your suburban residence, the Dirtbag isn’t afraid of baring it all.

B) Back Seat Mattress 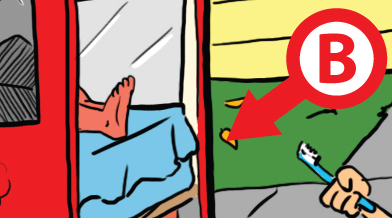 A Dirtbag classic in every regard, the practice of converting one’s back seat into a bedroom/storage unit is often the first domino to fall on the path to Dirtbaggery. An assortment of Paco Pads, crash pads, soiled mattresses from the thrift store, and god knows what else comprise the Dirtbag’s cozy nest. Some of these migrants go to great lengths customizing shelves to cull the chaos, but don’t be fooled! There is no such thing as an ‘orderly’ camper, only one that is on way to becoming filthy. 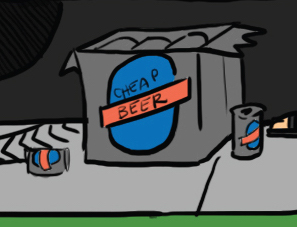 Commonly referred to as the liquid pork chop, a morning is often just what the Dirtbag ordered! In addition to supplying much-needed calories without a high price tag, the breakfast beer serves the dual purpose of vanquishing the hangover acquired during previous night of slapping wine bags, bottles and shotgunning racks of "Boston Shitty."

As if that wasn’t enough, many Dirtbags turn to the breakfast beer as a pseudo-mouthwash, cleansing the remnant of cheap pizza and Ramen from the night before. 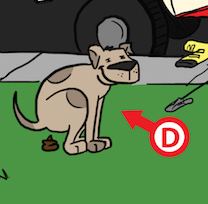 Everybody loves little buddy—until he/she’s shitting on your lawn! Typically without companionship for long periods of time (except for last fall’s trim camp in Humbolt County), the Dirtbag regularly turns to four-legged friends for love, affection and even intellectual stimulation. Plucky pooches are a mainstay of the Dirtbag lifestyle for very simple reasons: dogs are more loyal than humans (mostly), they never complain about the smell of dirty laundry, and in some parts of the country, they merit a higher payout in social checks. Anchor pup!

Look for: Complete lack of doggie , a genuine love between man and pup. 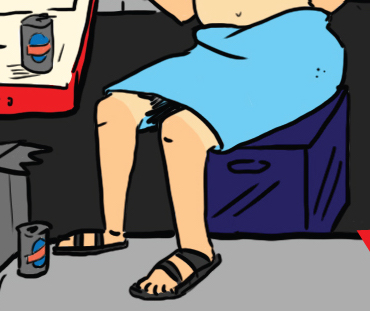 When is everywhere, that means a Dirtbag’s living room can be anywhere, too. Not prone to wasting space or utilizing single-use items, the Dirtbag tends to repurpose their possessions so as to have a comfy chair wherever the road leads. In a real-world sense, this means that milk crates, coolers and any other possessions usually relegated to the garage become part of the Dirtbag’s lap of luxury. 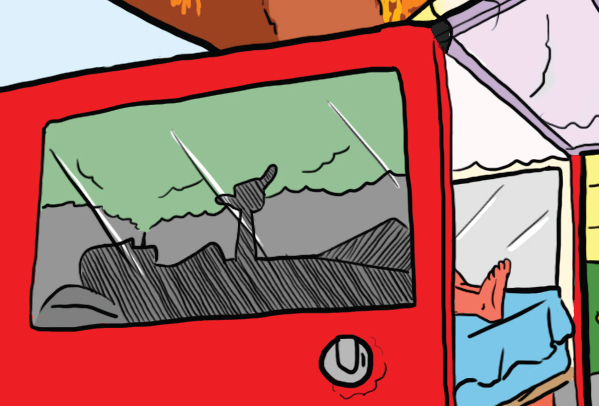 Some Dirtbags don’t smoke herb because it may negatively impact their summit attempt’s 3 a.m. start time, but many others before, after, and during their daily exploits. Some of the first ‘functional potheads,’ you’ve likely had a stoned Dirtbag tech your skis, serve you drinks, or take you on a guided tour, and you may not have even realized they had just a giant bowl only minutes before taking responsibility for your gear, dinner, or safety in the wilderness. 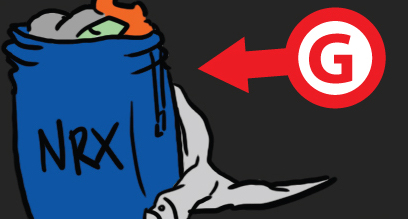 There’s something about spending years of your life on the road that is conducive to never folding your clothes or putting them away neatly. The answer for many Dirtbags is simply not doing those things, instead stuffing every clean load of laundry into an oversized stuff sack or dry bag. After all, who cares about wrinkles when the alternative means you can compress your wardrobe into the size of a basketball and lash it to the roof of your truck in a snowstorm. Dirtbag fresh! 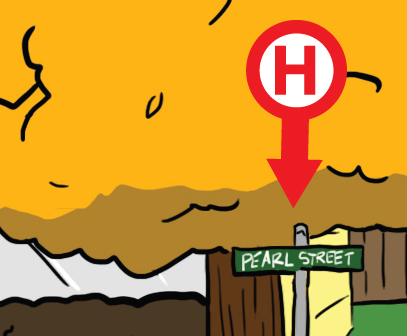 Dirtbags are nocturnal ninjas! If the chosen campsite is a residential neighborhood, they’re unlikely to vacate in a hurry. But, if there’s one thing that all Dirtbags hate, it’s paying for a campsite. If it’s a pay-for site, chances are you’ll never know anyone had been there. There’s no better way to rouse a Dirtbag from slumber than to mention an ensuing fee.

Look for: Vans with blacked-out windows parked overnight at the library, out of state plates that disappear from in front of your home before dawn. 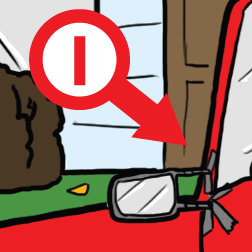 The classic! Dirtbags, exhibiting behaviors akin to their long-lost evolutionary cousins, the River Rats, have an affinity for customizing, repairing and even decorating their vehicles with duct tape. In the mind of a Dirtbag, the $3.99 roll is a much better investment than going to the mechanic to spend several hundred for a proper fix; that money could go toward a new kit, kayak paddle, or bag of ganja. Busted muffler? Just patch it with duct tape. Windshield shattered? duct tape can fix that. A broken heart? Strap on the duct tape. 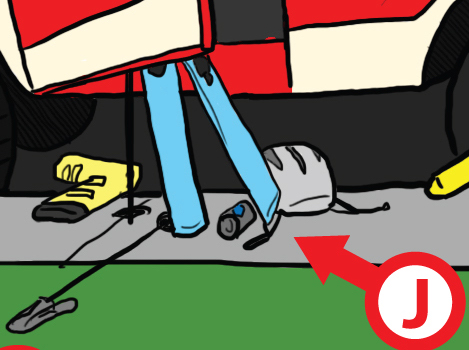 Dirtbags, having encamped in their rigs for weeks, months, maybe even almost always collect and maintain an arsenal of gear on the way. For the uninitiated, hanging out with a Dirtbag before a mission can be a bit like watching a magician pull shit out of a hat. Accounting for a full four seasons' worth of gear, Dirtbags have to be ready for any and all contingencies—they’ll be damned if they get caught without their AT setup after a freak early fall storm!

Look for: A ridiculous amount of toys, out-of-season holdouts, hyper hoarding of gear that will only be useful once the seasons change months from now. 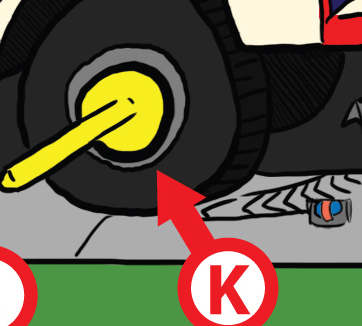 One byproduct of public vehicular living can take the form of unwanted attention from law enforcement. Unfortunately, old expired parking tickets do in fact make great fire kindling, yielding a large disconnect between what the state thinks is owed and what the Dirtbag can distantly recollect. However, the use of a boot to keep a Dirtbag accountable often backfires, as it further locks down the vehicle in question, in the process creating the ever-elusive Booted ’Bag. Municipal parking enforcers beware: your attempts at punishment may further enable this rogue behavior.

The Dirtbag's been up since 3 am preparing to rent you skis. Ryan Dee Illustration.

Well-versed in preparing for big outdoor missions, sometimes the Dirtbag has a hard time separating their missions from the mundane requirements of everyday life. Wanting to be organized and efficient lest something forgotten, the Dirtbag is habituated in over-preparing, even for a normal day at work. If you see someone laying out their underwear and socks like they would cams and ropes before a climb, you might have a Dirtbag on your hands.

Look for: Intense preparation, counting of clean-ish socks and boxers, day's outfit laid out on tarp or car hood.