Editor's Note: Here at TGR, we’re of the opinion that gaping is a four season activity. As experience shows, Gaping is a state of mind not bound to one culture or country. The questions change, as does the cause of the gaper’s confusion, but the blank looks, and the clueless demeanor universally stay the same. In this edition of Ski Town Caricatures, we turn our lens toward the gaper with the aim of identifying some tell-tale signs that can help you, our faithful readership, better understand and empathize with this largely misunderstood invasive. Just remember — always carry gaper spray! 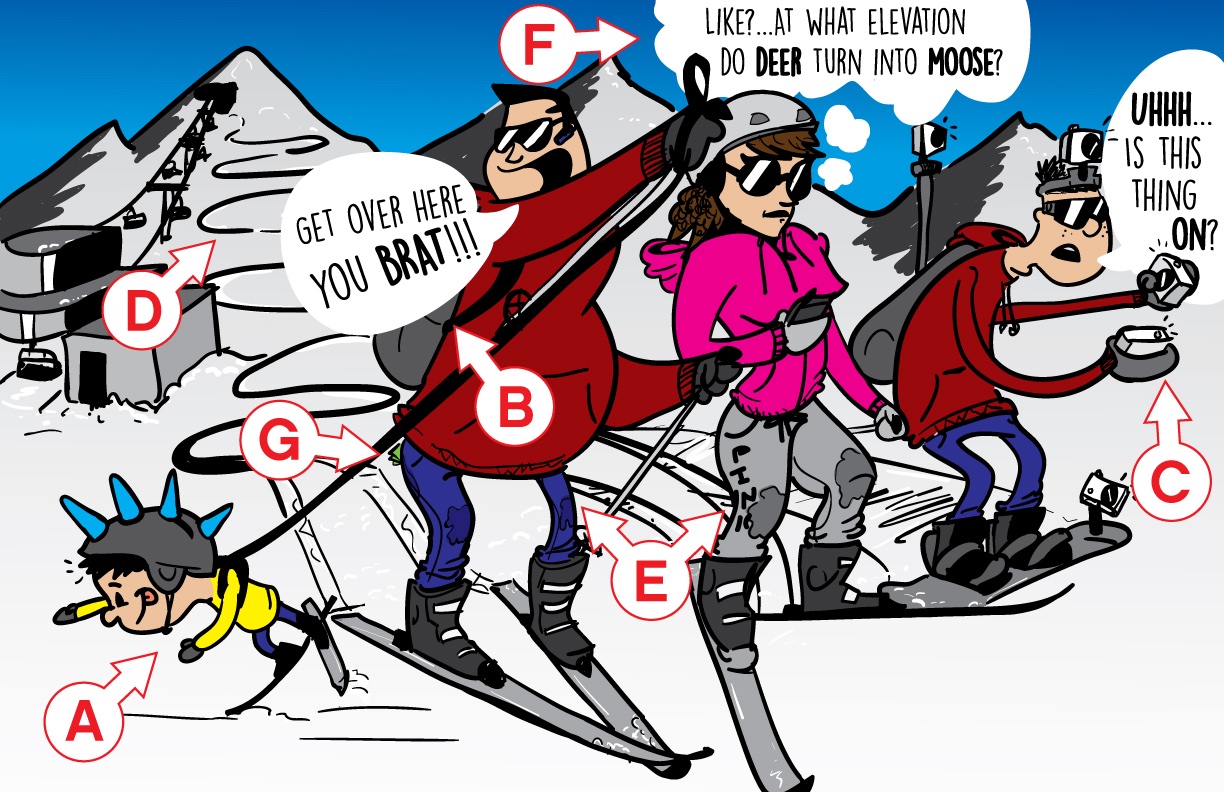 The Gaper—a mythical and beguiling breed. An invasive species, many mountain town locals in recent years have been raising the alarm in response to the influx of gapers overrunning their towns, parks, and ski areas.

Once thought of as an outlier, gapers of all shapes and sizes, often empowered by hefty bank accounts and the corporatization of the ski experience, have begun to overrun the Intermountain West. Just like Canadian Geese, gapers occupy and defecate on all the best real estate.

As tomorrow is April 1st, and many a Gaper Day will be celebrated throughout North America, we thought we’d undertake a rigorous analysis of the gaper's dominant characteristics:

Exhibit A: The Kid On a Leash

For some reason, gaper parents trend towards micromanagement and control. They spent thousands of dollars getting their kids to the mountain, and now that the dream is a reality, Mom and Dad just can’t let go. And of course, everyone knows the best way to keep tabs on the kids is to put them in a collar and/or body harness.

These are the same children who grow up over-achieving, never causing any trouble. Until one day, they’ve taken a few too many AP exams and tried out for their last varsity squad. Six months later, the same kid is found in a Portland heroine den strung out, 50 pounds lighter, and well on their way to an invigorating sense of individuality.

Exhibit B: Yelling at Your Kid In Public 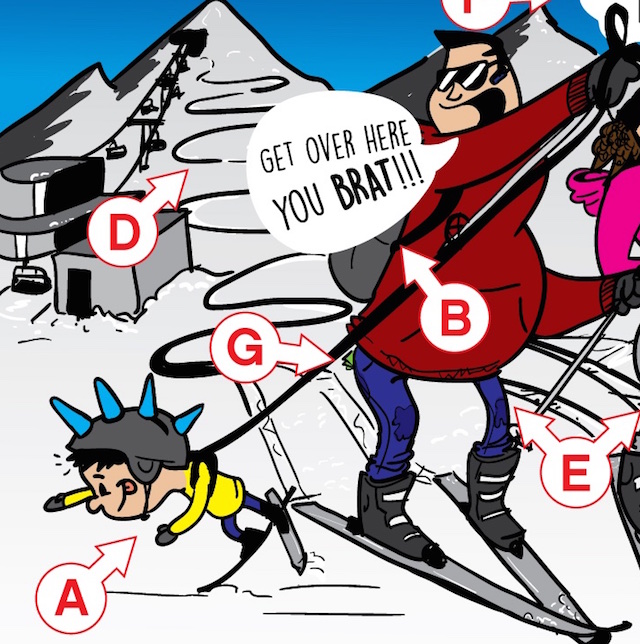 Nothing says "gaper" like taking out emotions on the ones you love. Maybe mom sucks at skiing—she’s mad that her lil’ kid can rip, or maybe she lost her ‘real’ job. Whatever is going on in mom and dad’s life, they have chosen the ski resort, or another public venue to humiliate their child in front of countless strangers.

This might be the worst of all gaper offenses, because it can permanently ruin a person’s perception of what a day on the hill should be like. Additionally, this one is a double edged sword—not only does it scar the kid, but it’s also super awkward for everyone within earshot. On the one hand, it’s not your business. But on the other, Mom and Dad have made it everyone’s business.

Sometimes a local bro or brodette might step up to aid the poor kid, calling out Mom/Dad for being such a shitty parent. Having a public meltdown is never a good thing, but if a parent wants to assure their child’s eternal resentment, there is no better way. 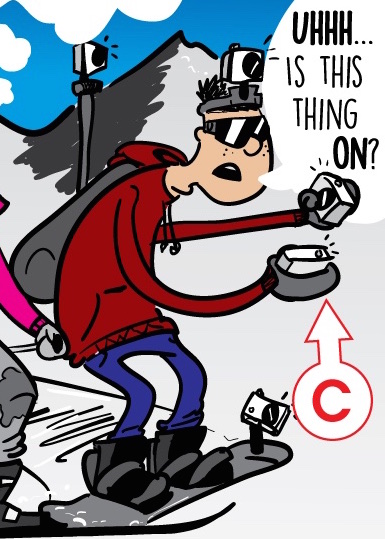 Let’s face it, narcissism lies at the nexus of social media and action sports. The technological equipment available to just about everybody these days has opened up a Pandora’s Box of bad footage. Because these cameras are not hard to get, and relatively inexpensive, HD “hero” cams are the Air Jordan sneakers of today.

Every suburban kid dreams that to “be like Mike” or “be a hero” just has to slap down the requisite cash, mount a box that looks like a tiny microwave to their head and voila…you’re now a badass.

Are you sure you're not a Trustafarian, either? Check out Sam's other piece in the Ski Town Caricatures series, The Trustafarian, just to be sure...

Unfortunately, this not the reality. You might be a gaper if you are wearing multiple POV cams with a diverse array of body mounts. One on your arm, two on your head, one helmet-boom mount for front-to-back third-person angles. And of course, one of those ridiculous selfie poles (narcisticks).

You just made it to the top of Teewinot lift; now it’s time to self-produce footie of you and your crew slaying some low-angle terrain. It took five minutes to make sure all of the cams were recording because you had to ask a stranger for help, but you can’t wait to edit this shit and post it to tetongravity.com once you get back to your room at the Four Seasons. Sick!

A hallmark of all Gapers is the penchant for making beginner turns, most often on the heavily-congested lower mountain. Often this looks like you’re making giant Z’s across wide swaths of a run. But the turns aren’t consistent, putting those more experienced people around you on edge, because you’re literally a yard-sale waiting to happen.

The classic. Perhaps the most well known of gaper traits, you ski or ride in denim, with PRIDE, damn it! You turn your ignorance, a net negative, into rugged individuality, a net positive. You’re straight off the plane from Dallas, and jeans are all you ever wear—anything else would be for pussies.

Beyond the jeans, you’ve ignored expert advice to outfit your family in synthetics like Polypro, Capilene, or polyester. Now, all finished with his first lesson, your little buddy has sweated through his underlayers, and is uncontrollably shivering and is almost on the verge of tears. You’re cold and wet too; the cotton socks that you’re wearing are soggy and don’t feel good.

Your wife retired to the bar after only two runs to drink cocktails by the fire and flirt with the young bucks. Her day-lift pass was $120, but the pneumonia that your kid is about to contract in the coming days will be costing a lot more than that. 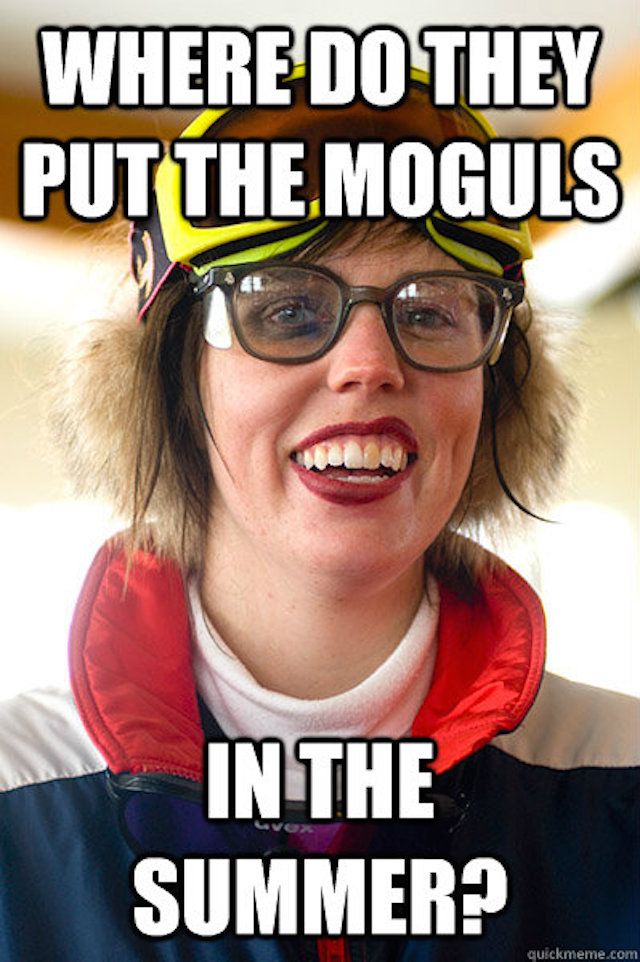 Oh my god, my brain hurts! Ask any local who’s been in the trenches and they’ll tell you the horror stories. If a question can’t be answered without sounding like a dick, sometimes it’s better to not say anything. During their travels, gapers ask a whole litany of mind-numbing questions. Some examples include:

“Which way is down?”

“What elevation do the deer turn into elk?”

“Where do you put the moguls in the summertime?”

“What trails are they grooming today?”

Whether we’re talking about the valet, the server, the bartender, or the ski instructor, you stiff every one of ‘em. A Goldman-Sachs executive, you never worked a service industry job, and you have no compassion for the notion of compensating for good service. Besides you’ve already spent $20K to experience the “greatest skiing or riding in North America,” so paying an actual human, as opposed to a corporate entity, is just unpalatable.

But unbeknownst to you, the same ‘help’ that you so often refrain from tipping might just have the last laugh. After all, the tune you got at the repair shop wasn’t all that thorough, your double espresso this morning was actually a single, and your eldest daughter snuck out last night to have a clandestine rendezvous with the Australian instructor. Son-of-a-bitch!

Was working in a shop at the ‘Bird a ways back. Big pow day—a number of people came into the shop having lost skis—submarined in the snow. We ran out of the long nylon beater cords and a guy who wanted a pair was livid. Yelling at me about how we cant charge him for a lost ski if we cant provide him with a pair of “ski finder cords”. So I came up with the plan to sell yellow caution tape I had in my truck for $5 a strand that people could tie onto their brakes. Sold it to at least 50 people. 2+ rolls. All of us working in the shop had it tied around our heads like a headband. So there were 50+ beaters clucking around the bird with 10 feet of yellow caution tape streaming from each ski.  Gaper identification system. And I had a few hundred bucks in my pocket.  A couple people told me it saved their skis. Win - win. Wish I had a picture. This was pre POV days, otherwise there would be some epic footage.

Radioface, That is AMAZING. Next time you’re in a situation like that, take some pictures and write it up. Great imagery in your story!

Not to take what was intended to be a lightweight silly article too seriously, but you’re off-base on the kids harnesses. My kid’s 7 and he rips: steeps, bumps, trees, crud, whatever you put him on. Starting him out early, using a ski harness was great for him, and put him at ease on slopes that we wouldn’t have otherwise put him on. Harnesses are also nice for chairlift assistance and safety. Skiing isn’t just about rad bros, it’s fun for 4- and 5-year-olds too; get over yourself.

Bobz, I do agree that the caricature narrative tone is intentionally a bit cynical. In my brainstorming for this piece I had envisioned more of the ‘leash while walking’ scenario with the parent, but I definitely understand and agree with you that the child harness has great merits in the context of instruction. Hope you got at least a couple smiles. -Sam

Anyone who writes “Canadian Geese” must surely be a gaper. Canada Geese is the plural.