According to legend, hidden away somewhere on our planet, lies an elusive but wondrous mountain range with fields of snow just waiting to be carved. So far it has only existed in our imagination, but that hasn’t stopped snowboarder Nick Russell from trying to pinpoint its location. His only clue was that these mountains were massive and required complicated foot-powered travel.

His recent film, Range of Mystery follows this quest, which starts in California's Sierra Nevada and continues to India and Bolivia. Filmmakers Nick Russell and Gray Thompson bring the audience on a unique adventure as they search for this fabled range, resulting in a film that’s playfully different. While the narrative is partially fictitious, the snowboard mountaineering is as raw as it gets. The three amigos—Russell, Thompson, and Danny Davis—experience everything from herds of alpacas at basecamp to getting caught in a lightning storm while trying to summit a mountain. Despite the hiccups, the trio remained relentless in their goal to lay down first tracks in some of the most remote and untouched terrain imaginable. We caught up with Nick Russell to learn more about the project and whether or not he found the mysterious range.

The film is available on iTunes now, but if you’re around the Tahoe area on December 7th be sure to catch the world premiere of the film. Tickets are available here.

Does the Range of Mystery refer to a particular range?

NR: The film is based on this idea of a fabled mountain range that seems to elude people. No one really knows the exact location of it. At the beginning of the film I receive a map and the film follows us around the world as we search for this range.

So there’s actually an element of fiction to the narrative?

NR: Yeah, there are some scenes we crafted. It’s honestly the most intricate storyline that Gray and I have ever tried to create, and we wanted to give the viewer an experience of the worldwide journey. 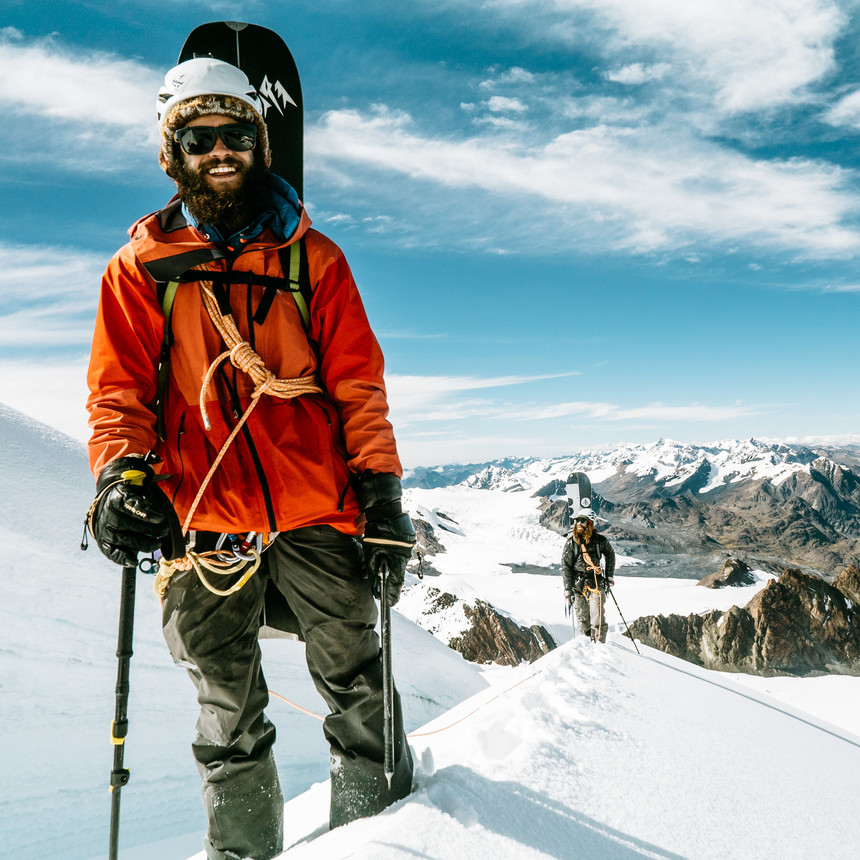 If you're around the Lake Tahoe or Salt Lake City Area come watch the film on the big screen. Gray Thompson Photo.

Where does the film take us?

NR: This part isn't fiction. I heard about this range in Northern Bolivia from Jim Zellers, who is a guru in our sport, and he went on an expedition to this place twenty years ago in 1989. He told me it was the best place in South America that he had ever ridden and no one has been back to zone ever since. There’s little information online except for a handful of old blogs from the early 2000s, but aside from that, there was this huge element of mystery.

I was intrigued hearing about a place close to the equator that’s glaciated, especially since there wasn’t any way to know if climate change deteriorated these glaciers over the years. The northern part of the range is on the border of Peru, and this mountain, Chaupi Orco, that we were going for is actually in both Bolivia and Peru. I really like the Andes and just got obsessed with going to this zone. We also explore our home mountains in the Sierra Nevada and travel to the Himalayas as well.

Did you decide on this narrative before heading to these destinations or did it come together during post? 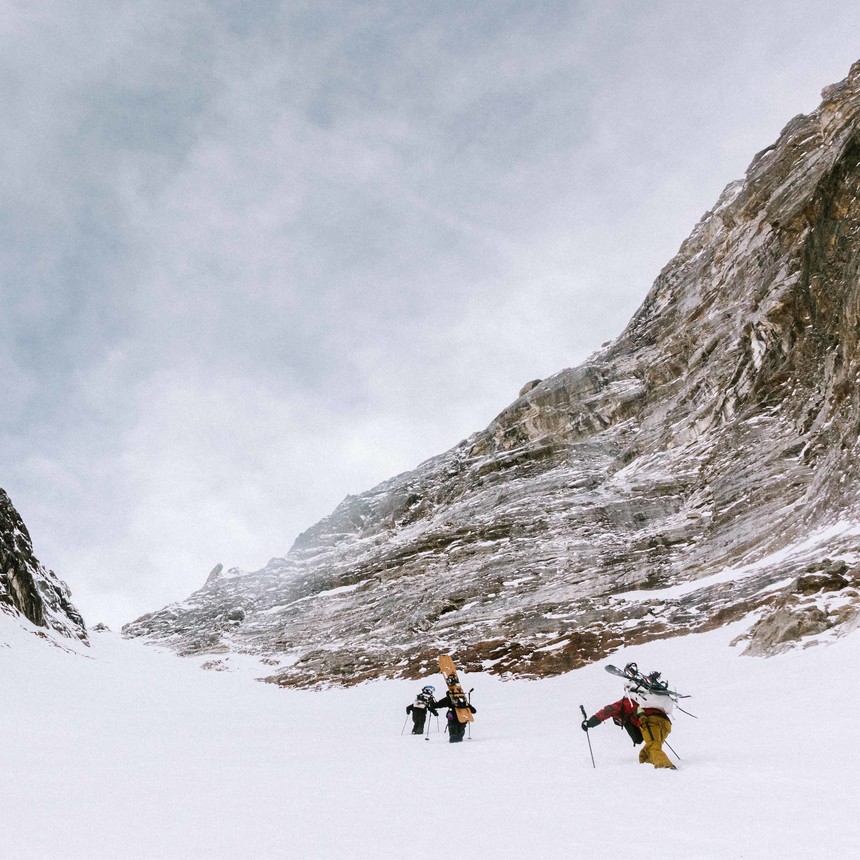 Much of the experience was type two fun at its finest. Gray Thompson Photo.

Tell me about “the Three Amigos”, aka the crew?

NR: So it was me, Gray Thompson, and Danny Davis. In Bolivia, Nathaniel Murphy joined us and Neil Provo in India.

Danny is a halfpipe superstar and we actually grew up together back in Vermont. I live with Danny now in Tahoe and over the last few seasons, he’s been coming out splitboarding with us more and more between contests. He’s a world-class athlete so I knew he’d be able to adapt to this kind of snowboarding.

Gray and I have been riding and working together since I moved to Tahoe. He’s become one of my closest riding partners so it seemed like a logical choice. Plus, he said yes instantly. A group dynamic in any trip is super important. I like to surround myself with optimistic people and low-stress vibes, which is what we had throughout the film.

Any fond moments with the crew?

NR: The entire thing was wild. We were so far out there once we got to the mountains. From having our basecamp next to a herd of a 100 alpacas to getting caught in a lightning storm at 19,000 feet to riding off of the tallest peak any of us have ever ridden. Being so self-sustained out there for an extended period of time was new for all of us. The fact we were able to snowboard, find good snow, and do it all safely was a huge success.

How did you go about planning for this?

NR: The planning process took a really long time and was super complicated. For example, when you think of South America you’re thinking about the Southern hemisphere and winter would be July, August, and September. But since it’s closer to the equator and this range is so close to the Amazon jungle it actually creates its own weather. It took a lot of research to determine the right times to go. Overall it was one big mystery which was really fun to try to figure it out.

What was the wildest experience of the trip?

NR: Definitely getting caught in that lightning storm, it was super intense. Basically, the weather out there moves in so quickly from the jungle. It will be sunny one second and then you’ll be in complete whiteout conditions the next. We were going for the summit on our second attempt and it was clear, but there was some mist coming in and out. We were overly optimistic I suppose and we continued to climb. When it wasn’t clearing we started descending and that’s when the lighting began.

We were up on the ridge covered in glacier gear and holding axes—basically just lighting rods out there.

It was full retreat mode. When we got to the glacier valley we stripped all our gear and squatted on ropes in lightning position. It was nothing but holding our breath in between the lightning strikes. When the storm was gone we got back on our splitboards and just bolted off of that mountain. It was a humbling experience, but a few days later we went for it again.

And this was on top of everything else you had to mitigate during the trip?

NR: Definitely. Food rations got low. To the point, morning breakfast was one or two spoonfuls of oatmeals with butter. Our cups of pasta would consecutively get smaller and smaller. It was a great learning experience for sure.

If it wasn’t difficult to achieve then what’s the point of doing it? It just made [reaching the summit] that much more gratifying. 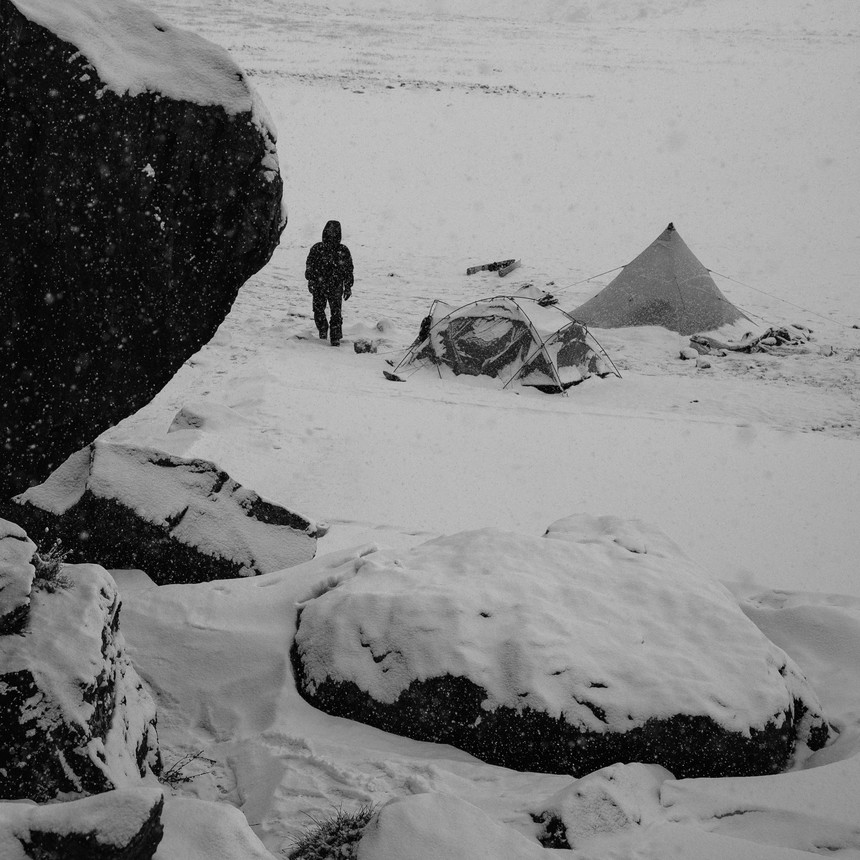 There was no room for error since the crew was completely self sustained. Gray Thompson Photo.

How did the whole film push your snowboarding?

NR: It’s what we’ve dreamt about. Going and riding these peaks that have never been touched and doing it on our own terms. Using all our collective skills that you’ve learned over the years and really applying them to some serious technical terrain.

There really wasn’t any room for error, the safety net was nil—it was just us out there. It’s sparked the fire for the future and made me realize the potential, not only around the world but also in our local mountain ranges like the Sierra Nevada. The mountains I live next to are so vast, and there are a lot of unnamed peaks out there.

Sounds a bit reminiscent of Ode to Muir.

NR: Totally. I went on a seven to eight-week traverse with Jeremy Jones and Danny about two years ago and the experience helped train me for bigger missions like what we did in the film.

Must Watch: Cam FitzPatrick’s This is Us In: Coalesence

Must Watch: Cam FitzPatrick’s This is Us In: Coalesence

If you watch enough snowboard films, you know just how much it can take to get a good shot, let alone enough to produce a whole movie. Cam FitzPatrick's latest project, celebrates those stars aligning in one of the best places for it: Jackson, Wyoming. While we're biased towards our home mountains, this film will give you a look at why. Featuring riders like Aaron Hallenbeck, Cooper Branham, Hans Mindich, Chase Josey, Benji Farrow, Taylor Gold, Asher Humphries, and Travis Rice, there's no

Trevor Kennison Returns to the Backcountry

Trevor Kennison Returns to the Backcountry

If there was one phrase to describe Trevor Kennison, it would be ‘doesn’t give up.’ Paralyzed from the waist down in a snowboard accident while riding Vail Pass, Kennsion didn’t think he’d get to experience snowsports again. After rehabbing at Craig Hospital, his sister convinced him to give sit-skiing a try. Since then, Kennison has made waves in the ski community as not only an incredible athlete, but a true bright spot in the sport. Kennison’s unbeatable style and attitude caught the eye

The Spotheads Boys Throw Down in Latest Film

The Spotheads Boys Throw Down in Latest Film

We’ve found the thing you didn’t know you were looking for: twenty whole minutes of good old fashioned urban snowboarding. The boys at Spotheads have provided us with the goods and boy, do they provide. Top notch street riding mixed in with a healthy dose of carnage all cooked together with friendship make this film everything a snowboard film should be. Big kudos to these boys for throwing down and holding nothing back for our entertainment even if it meant a couple face-to-concrete impacts