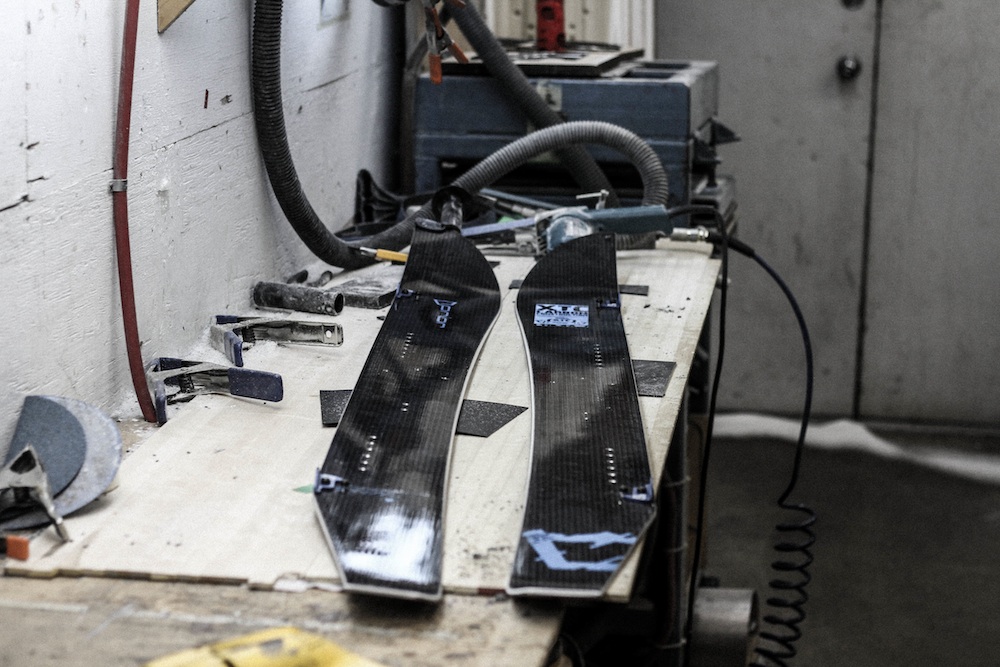 A Prior Swallowtail Split in the shop. Prior photo.

Looking for something new and unusual to ride in the backcountry? Skip the mainstream companies, and go boutique.

Smaller splitboard-focused companies have a core following of backcountry snowboarders who provide valuable feedback about how their splitboards ride, and how they should ride. As a result, most of these companies tend to experiment with split designs that the product engineers at corporate snowboard manufacturers only dream about. These companies aren’t pressing splitboards for everyone. They’re pressing unique products for people who actually ride hard.

We explore seven of this winter’s most exciting splitboard design shapes. Every board on this list was designed and manufactured in North America. Some are new-and-improved versions of classic models. Others are limited editions for 2015. No matter what, they rip. Let your discovery begin.

A powder splitboard that can hold an edge on hardpack? Yes, please! The G-Pow has rocker between the bindings and two small flat sections just outside them so that when you pressure an edge, the tail’s sidecut engages.

“The ultimate pow board will have a full reverse sidecut, but we know that is not ideal in Colorado's variable backcountry conditions, so we combined a reverse sidecut in the nose where the control in the powder is needed and put a regular sidecut in the rear for hard pack conditions," Oz owner Adam Browning said. We tapered the sidecut for smooth powder turns. The nose has a huge early rise rockered shape. The stance and sidecut are set way back (100mm). We also incorporated a whale tail to help make this a true powder board.”

The original powder board shape, now available for your splitboarding pleasure. Prior photo.

Maybe this is a cheater's choice. Swallowtails aren't new, but split swallowtails are. Whistler-based Prior Snowboards makes the Swallowtail Split to float through British Columbia's maritime snowpack.

Like most powder-focused boards, this split features a rocker nose and camber tail. What's interesting about the swallowtail shape is that it maximizes the board's effective edge (good for chunder and runouts). This split doesn't have a lot of taper--the nose isn't much wider than the tail--but the swallowtail shape lets each 'tail' flexes independently, making it a more manageable ride in deep snow.

What about skinning with a swallowtail shape? Will Westwood, Prior's Product Engineer and Materials Manager, explains that "Skinning with the Swallowtail Split, or any of our boards with powder rocker, is exceptionally efficient due to the large amount of camber through to the tail, providing superior grip over rockered boards in the skin track. Rockered boards, by their very nature, tend to lift out of the snow, whereas camber is inclined to press into the ground, providing extra grip. 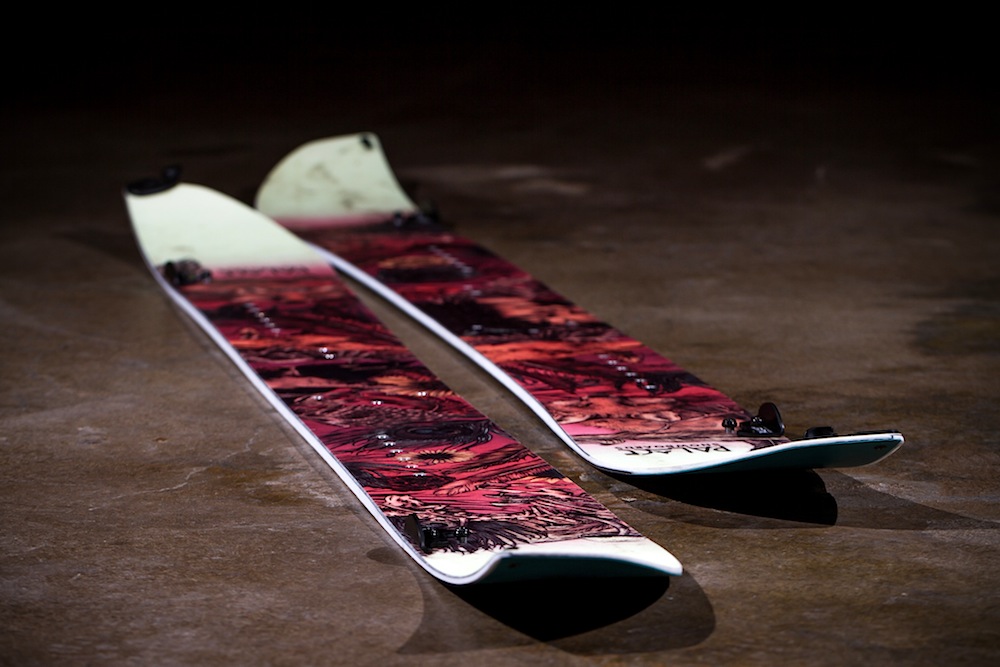 This one's for the ladies. Most splitboard companies have one or two female boards in their line-up. Some have none. Based in Salt Lake City, Palace Snowboards is the only entirely women's-specific splitboard company in the world.

The Zeitgeist is an ultralight directional split with a big, spoon-shaped, rockered nose and pintail. This shape and camber profile were specifically designed to help smaller female riders maintain their center of gravity and prevent fatigue in deep powder. It utilizes durable plastic sidewalls and edges and ditches steel to save weight for long tours. 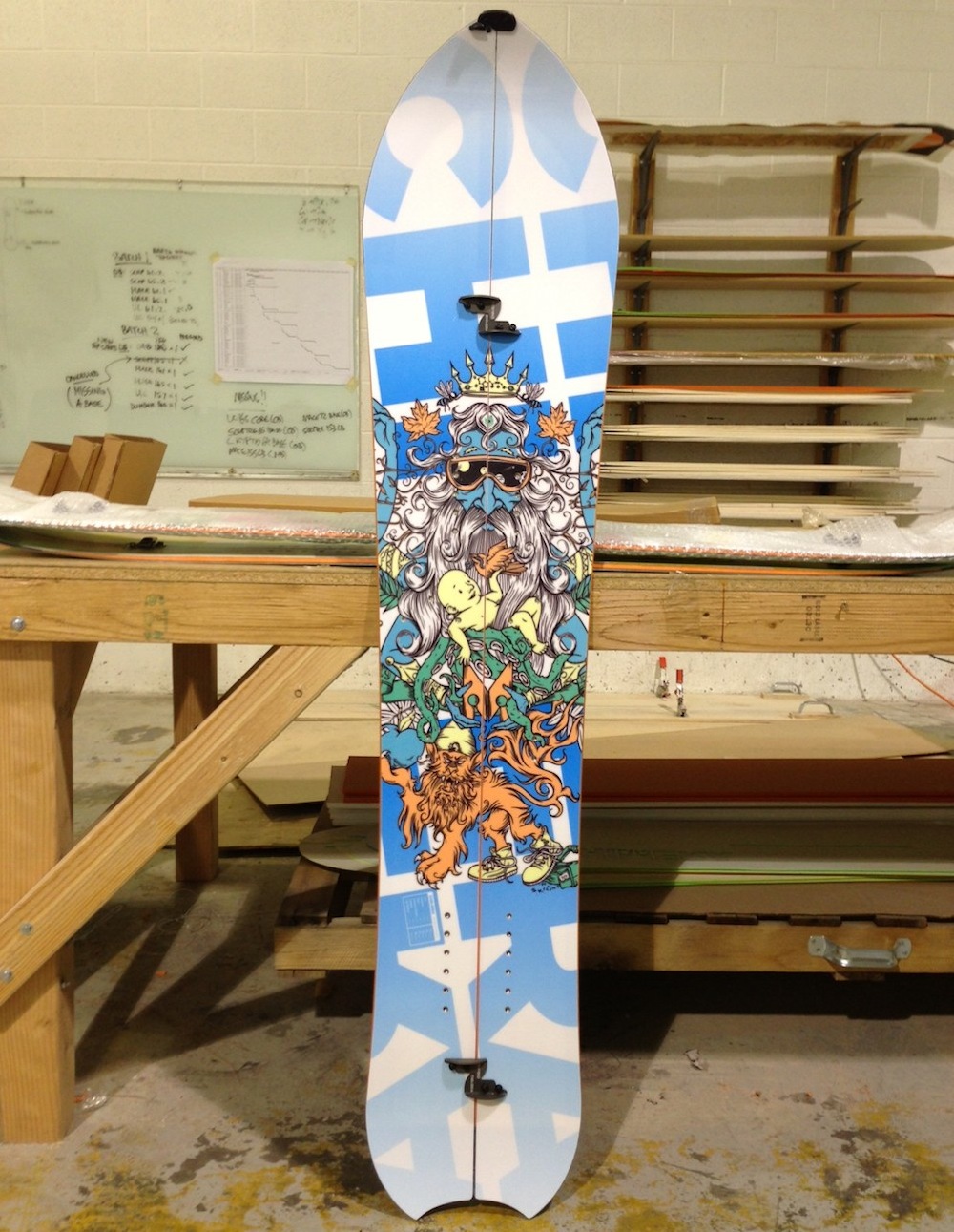 Inside the Chimera shop. Chimera photo.

Palace's brother company, Chimera, released a limited edition board this season, the Chubby Chaser. This take on one of Chimera's most sought-after models, the Unicorn Chaser, features a ton of taper (55mm) and a very unusual tail shape to facilitate quicker turns.

Owner Allister Horn explains that he designed the Chubby Chaser for Wasatch-based guide and local backcountry snowboarder Ash Christensen, who wanted a larger, more tapered version of the Unicorn Chaser. The result is this one-size-fit-all 163cm powder splitboard that's rockered in the nose, flat under foot, and camber in the tail.

Like Palace, Chimera also uses a plastic sidewall flushed with the board's base, a technology Horn designed called BUHMPERs.

Once upon a time, Venture Snowboards was a small operation like some of the companies on this list. Now Klem and Lisa Branner's Silverton splitboard operation is world-renowned.

This year, Venture redesigned the Zelix with a softer flex and a locally-sourced aspen blend core. In other words, it's almost a half pound lighter than the previous model.

Weight and flex aside, what's exciting about the Zelix is its tapered twin shape. Both the nose and the tail can plane equally well through pow, allowing you the rare chance to ride switch on your split.

The first American splitboard company with its lightest design yet. Voile photo

In a time where most decks are bigger, rockered, heavier, and more tapered, the original splitboard company is going lighter and adding camber. Voile's Revelator weighs between 6lbs 6oz and 6lbs 14oz, depending on size. Its extended camber profile makes skinning more efficient and increases edge hold.

He says, "It's based on a 5’6” twin-fin fish surfboard. With lots of planing surface, it holds in speed and provides a fun, surfy feel. It surprises in mixed conditions, blasting over chop. Its moderate sidecut and flex even makes it fun on hardback and groomers. The flat tail provides another element of control, acting as a brake in powder when things get a little tight and dicey. Unlike many “undersized” pow boards, the Trout Trap has only minimal setback and a wide tail that does not sink."

From The Column: Split Personality

Throwback: 8 Lessons Learned From A Year…

Is Meditation the Key to Enhancing Splitboard…

How To Become A Splitboard Guide with Joey Vosburgh

The Complete Guide to Improving Your Splitboard…

Split Life Films: Getting Up to Get Down and Not…

10 Tips To Improve Your Splitboard Skinning with…

7 Boutique Splitboard Designs To Look At In 2015…

This list misses the most interesting of all: http://www.furbergsnowboards.com/www/?page_id=510 the only splitboard made with a sensible sidecut radius.

Snowboarder Clings to Cliff in Harrowing Situation at Blackcomb

Snowboarder Clings to Cliff in Harrowing Situation at Blackcomb

Of course we’ve all been in uncomfortable situations, but this one takes the cake. At Blackcomb earlier this week, a snowboarder took a bit of a misstep and ended up having to bear-hug a cliff and balance on a narrow part of the face with his board to avoid a steep, life-threatening fall. We don't know how long he was up there, but thankfully, patrollers eventually came and roped down to save him (the rescue reportedly took 1-2 hours). RELATED: Travis Rice and Craig McMorris Snowboard

Little Cottonwood Canyon and Alta Ski Resort in Utah have been having quite the week. A natural avalanche inundated Alta's parking lot last week and the ski resort just surpassed 400 inches of snow this season, with eight new inches to top it off. These additional few inches kicked off a massive avalanche that came barreling over a cliffside across the street from Alta yesterday. RELATED: Natural Avalanche Sweeps Through Alta Parking Lot No one was injured in the slide, but the Utah

It’s these kind of moments that show how valuable proper avalanche rescue training can be. On January 30th, during a spell of heavy snow and resulting High avalanche danger, several avalanches caught and buried riders on a face near Verbier, Switzerland. Luckily, other riders were able to extricate the victims successfully. Snowboarder Victor Liebenguth shared this POV from one of the rescues, as well as chilling caption reminding us how important this training is. RELATED: Watch A Skier