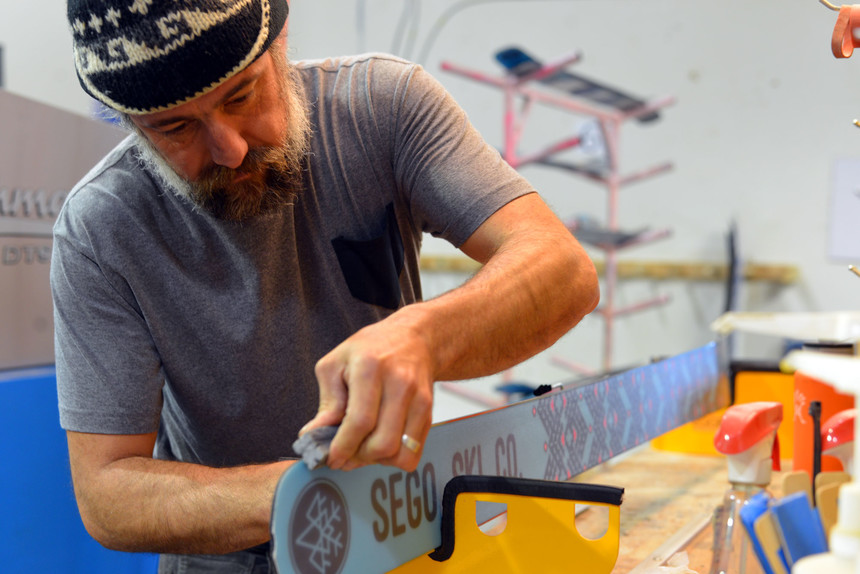 During Sego Ski Co.'s relatively short history, Ron Murray has become sort of a local legend. His 20-plus years of ski repair experience, combined with his time working in manufacturing and his wholesome philosophy on skiing (and snowboarding) has made Ron an integral part of the Sego team and brand.

Ron is pretty much everything you look for in a ski tech. His gentle demeanor breathes wisdom and humility, and it shows in his craft. After all, aren't our skis just an extension of our feet? When Ron was putting the finishing touches on my Big Horn's (which I’m in love with) he made sure to ask what kind of skier I am, what will I be using these skis for, how much do I ski backwards. He made me feel like I was coming away with a little piece of his wisdom built into my skis.

I recently checked into the Sego Ski Co. headquarters just on the other side of Teton Pass in Victor, Idaho, to catch up with Ron. He took a break from mounting a funky-looking telemark setup, poured me a beer, and sat down to chat about everything from snowboarding to new projects — and the Sego Ski Co. mindset. So, Ron, how long have you been with Sego and how did you first meet Tim and Peter?

Well, lets see, going on now just over two years, so basically since the beginning. And I first met Tim and Pete I guess through "team poorly planned" and just friends of the shop. They were looking for experienced ski techs so they could sort of focus more on the business side of things.

Had you been working in repair shops or building skis previously?

Well, this is actually the first real "ski factory" that produces its own skis that I've worked in, but I've been working in ski repair and tune shops from Vermont, to Utah, to now Teton Valley for over 20 years. I'm originally from Lawrence, Massachusetts, but spent most of my formative years in Vermont. Mt Snow was probably my first "home mountain" where I started working in a tune shop, and then spent years in Stowe where I co-owned Iride mountain bike shop.

But you do have experience working in manufacturing and heavy machinery? How has that helped translate to building skis and how much have you had to learn?

My manufacturing and machinery background has been huge in the transition into the ski repair world. It definitely made me wonder why I didn't get into ski repair and building sooner in my life. It’s great working in a factory where the creative process is so visible, but that being said, it is still a factory and the attention to detail is essential, and we still need to churn out quality products using the highest grade materials. Can you take us through an average day of "work" at the Sego warehouse?

An average day? [Laughs] Well we'll start in the morning, depending on the snow, and the cycle of work is put into play. There's always a list of skis we need to build that day, or in my case, tunes, mounts, repairs, etc., and we get to work! Everyone serves an integral part, much like an assembly line, yet we all "float" and work together so we can keep a more holistic process throughout. Most people keep a pretty artistic vision throughout the production process and are able to offer input and help each other out.

What do you like most about the ski building and repair process and what are you looking forward to?

Oh that's right you do snowboard!

[Sego ski builder Matt Furney walks by... "Yeah he gets it all!"]

So, as a snowboarder, how much have you learned about ski technology, shapes, rocker profile etc. in relation to different types of skiers and ski conditions?

Oh, I've learned a ton. But it all really goes back to the way I see things, I feel I'm able to understand people’s equipment needs based on their body's performance. I do have somewhat of an analytical mind in that sense. I pretty much skateboarded daily for 20 years, and I'd say the principles and the ideas are pretty similar to skiing and more so snowboarding. Have you seen a lot of change in ski and snowboard technology and shape over the past couple decades? Thinking of how big the resurgence of swallow tail snowboards and now skis has become.

Honestly, not a whole lot has changed. I don't have to use screws anymore, which is great because we have some of the strongest epoxy in the world.

But nothing is really new about these swallow tail shapes. I have a term for them. I call it "Nuevo-Retro." Kind of like how Chuck Taylors became so big again, there's no new technology!

What has changed is what people are looking for; their perception of the skis, and how they are being used. Skis have moved into more of an experience-based product.

Right, like most people have a touring ski, a resort ski, and a deep powder ski.

Exactly, and with that being said, as a business we have to keep selling more skis to the same person. I think the industry in that way has shown a sign of maturity. The one ski quiver is great, but it always compromises in one way or another. I really believe that understanding the skier's experience can be enhanced by a change in design. And that's what I and all of us share with Peter's sort of meta philosophy at Sego: the experience-driven product.

With that being said, how much of an influence does having Teton Pass as your backyard play in ski design and production?

Oh man, it’s huge, and we are so fortunate to be located where we are. Consistently getting to ride some of the best snow and terrain in the world allows us to build a superior product. Not only are we consistently getting fresh snow, (as we're in the middle of a 500-600??-inch season in the Tetons), but we get such a variety of powder skiing. From last week’s surfable cream, to this week’s "poof" blower pow, we get it all. We’re pretty much able to go out and test a prototype on the Pass, and come back to the shop and tinker, and have a new ski built within 48 hours. It’s amazing! If you're ever in Victor, Idaho, be sure to swing by Sego Ski Co. Headquarters, tour the factory, and have a beer with Ron yourself!

This guy is amazing. You can see how passionate he is in his eyes!