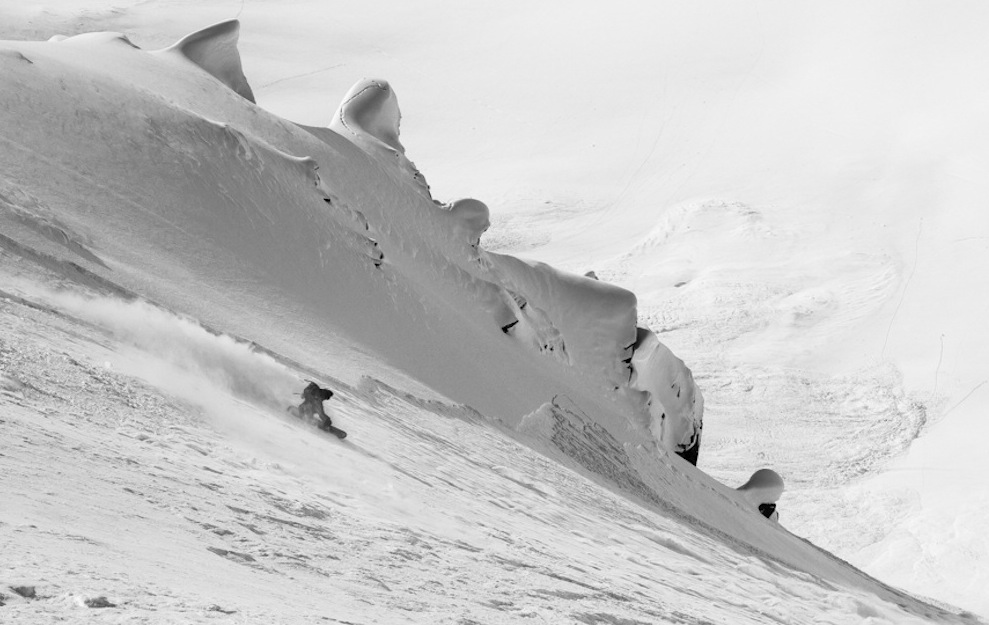 Voile splitboarder Cindi Lou Grant grew up at the base of Little Cottonwood Canyon with five older brothers. Grant’s rise to professional snowboarder didn’t include private coaches, childhood sponsorships, or a wealthy family to back her dreams. She started working at 13, and saved money every year throughout high school to get a pass to Brighton, where she met her future husband.

Zach Grant, also a Voile athlete, became her snowboarding partner-in-crime almost immediately. Together they built a cabin on Guardsman Pass at the top of Big Cottonwood Canyon so that they can splitboard the Wasatch as much as possible. Each spring, they travel to Alaska to hike for turns and capture footage of their human-powered adventures. After being featured this season’s Powderwhore Productions movie, "Elevation," the Grants will head deep into the Alaska backcountry to camp and ride spines.

Check out Cindi & Zach's handbuilt cabin in the Wasatch backcountry.

We caught up with Cindi Lou Grant to ask her about how she picks outs new, challenging terrain, what it means to be a full-time backcountry athlete, and what it's like to have her husband as her backcountry partner.

You’re in a unique situation in that your professional backcountry partner is also your husband. How that does intimacy play out in your snowboarding life? 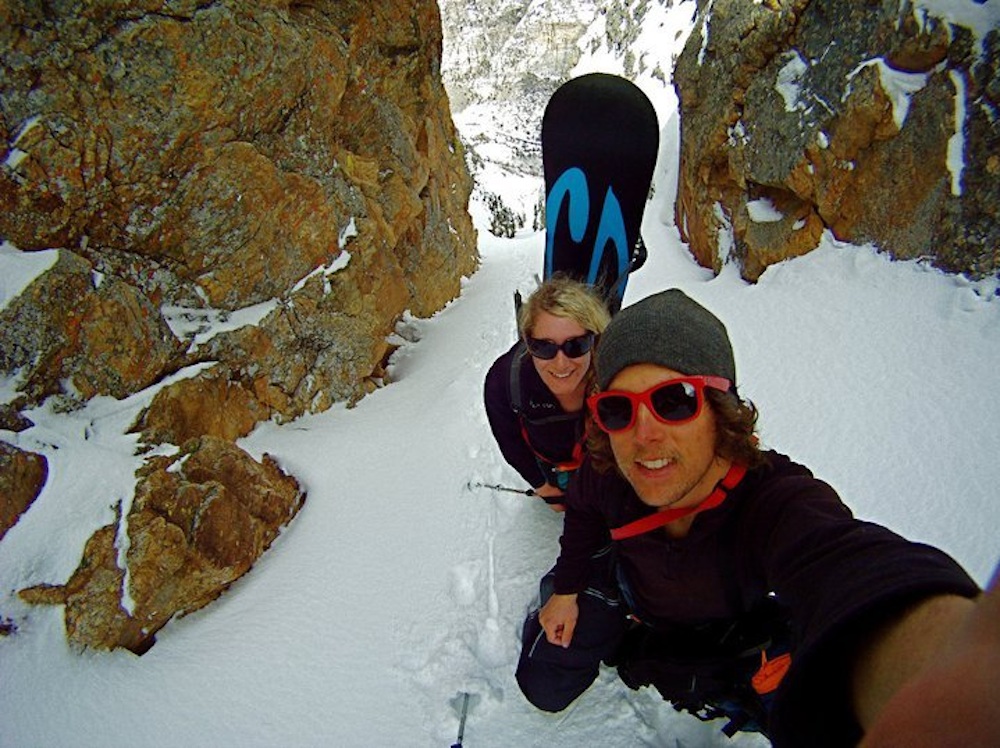 A lot of people have relationships on one side of their life, and snowboarding on the other. With Zach and I, it’s intertwined. We’re both super passionate about it.

When we’re out together, we’re hyper-focused on our surroundings and pushing each other to be better snowboarders. We’ve been best friends for such a long time. More than anything, that’s led to our success. We’ve always been about friends first. We’re both so hyper-focused on snowboarding, and we’ve made this life around snowboarding. I think that has also led to our success.

Zach has a lot of natural leadership skills but, at that same time, knows how to be really conservative. I sometimes have visions of grandeur. I like to push the envelope a lot. I have lofty goals. I’m driven that way. It’s good to have that balance.

Is there a creative spark that comes about when you think about where and what you want to ride? 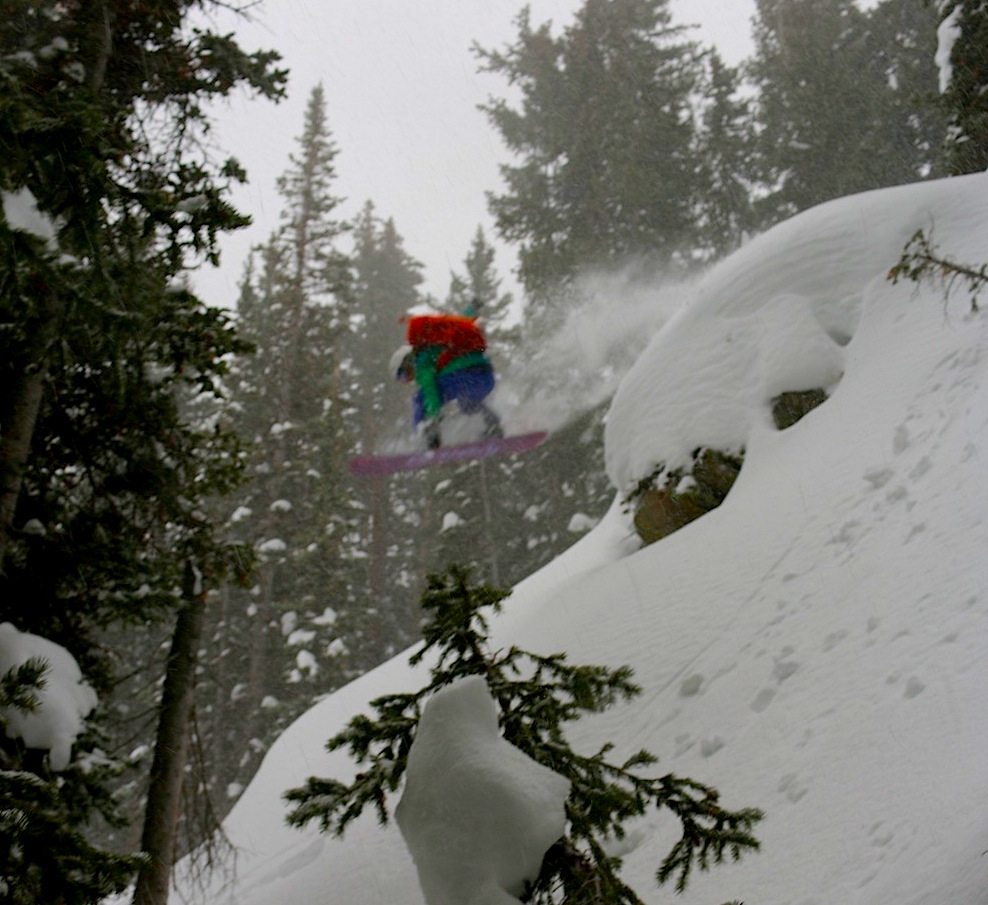 Airing over pillows (with a pack). Kordell Black photo.

Alaska is top priority. We center our season around knowing we are going to Alaska. We save all of our budget having that understanding. There’s not necessarily a creative spark. We know we are going to go there.

As far as where we are going in Alaska, we try to think out of the box. This year we’re trying to find spines in areas with a maritime snowpack, so that happens in a relatively small area. We’re going with Alaska locals who have a lot of say as far as what we’re doing. Trips are a collaborative effort. They’re never one person’s brainchild. We all sit down and collaborate on the trip planning, usually at the pilot's hanger. 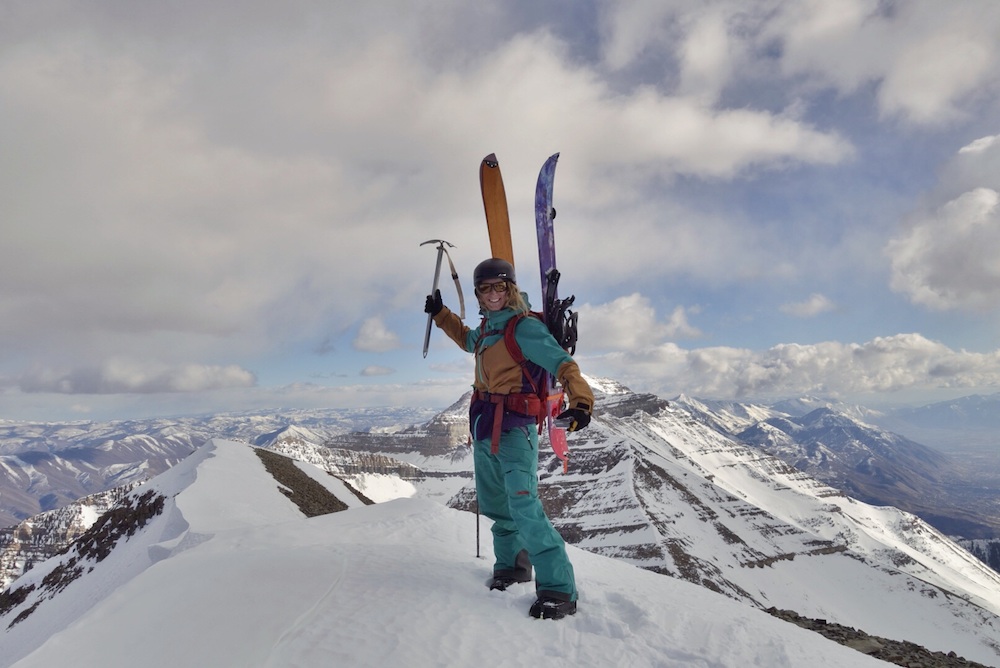 On the North Summit of Timpanogos in the Wasatch. Zach Grant photo.

Backcountry freeriding, in general, has a huge amount of creativity. I really like being able to leave my signature on stuff. What I look for as far as things on a line? Clean runouts really draw my attention to a line.

I like pushing myself. I get kind of stir crazy when things get stagnant. I am looking to step it up. The most important thing is coming home–I keep that in the forefront of my mind. It’s kind of balancing act. I want to push it but still come home at the end of the day.

That’s one thing about Voile that’s super-valuable. They are never like, "Cindi, you need to kill this or we drop you." For example, I was talking to [Voile Sales & Marketing Manager] Dave Grissom and telling him about my goals, and he said "Okay, well, don’t go out and kill yourself."

When I’m going out and getting footage and pictures, I want to be authentic without pressure. In this industry, there’s a lot of pressure, and it’s already high-adrenaline. It’s nice to not have that extra pressure in that situation.

A lot of filming features athletes who spend most of their time inbounds, or who train primarily in terrain parks. As a full-time backcountry athlete, what do you think about this? 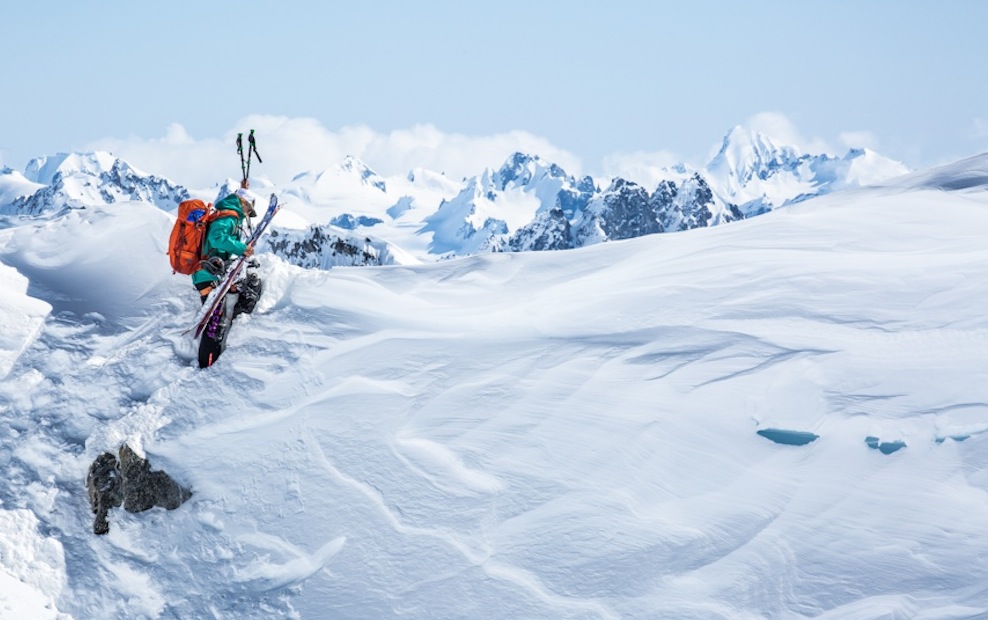 The resort is a great place to learn fundamentals. Even in the park, you learn to get super-comfortable on your board. When you bring those skills into the backcountry, that’s where it really makes a difference. You can’t let yourself get fucked up. Especially on a glacier. It’s not like ski patrol is going to come and take you away. You’re up shit’s creek.

To take your riding from the park or inbounds to a situation like that–I don’t think that skillset sees enough attention from the media. I think there’s definitely this common misconception that you can take someone out of the park and put them right into the backcountry and have them shred.

It makes it seem more attainable to just hire a guide service. When you take you an athlete out of the terrain park and put them into the backcountry, that individual is 100% dependent on guides and filmers. That athlete isn’t making any decisions. Does that make a really good backcountry athlete? Or is that an athlete on a super luxurious vacation?

Some people don’t take the time to perfect it, and unfortunately, we lose a lot of friends because of that. The media makes it seem so easy to get because they rely on guides and heli operations during filming. But I think what we’re doing is a lot different, because we’re kind of just putting ourselves in those situations. There’s nobody out there. It’s the middle of nowhere. 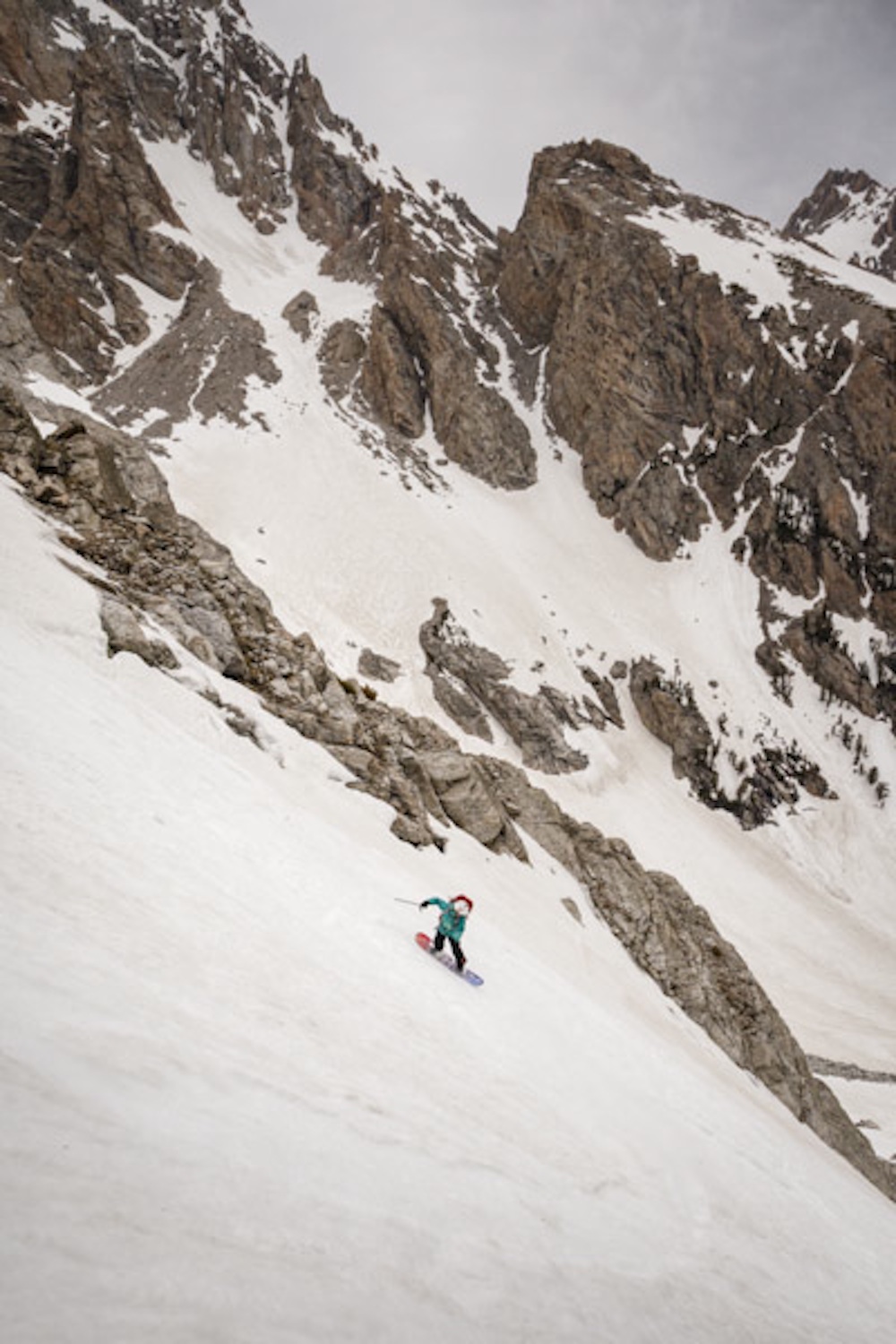 On the West Hourglass on Nez Peirce in the Tetons. Louis Arevalo photo.

You ride a lot of big, high-consequence lines in the backcountry. Most athletes have a mental process they like to work through as they prepare for riding gnarly terrain. Can you talk about your mental process, the fears and anxieties you work through before dropping in?

Most of the time that sort of mental process starts on the skin track. I work out a lot of the mental stuff through physical work. It helps me clear my mind and pick lines and set routes. I get a chance on the approach to filter my thoughts. It’s kind of like walking meditation. It’s like standing on the side of the road, watching your thoughts pass by.

I work out a lot of the stuff through physically working. It helps me clear my mind and pick lines and set routes. I get a chance on the approach to filter my thoughts. It’s kind of like walking meditation. It’s like standing on the side of the road, watching your thoughts pass by

I don’t have a lot of anxieties out there because I avoid them. If I start feeling uneasy about things, I turn around. I don’t have something that makes me want it bad enough that I won’t come back. If snowpack is stable, and everything is good, I continue on. We can always stop and have a discussion about what’s going on.

Check out all of TGR's splitboard videos, stories, and photos by clicking here.

The cool thing about splitboarding is that you get time to have that, to step inside yourself, to see how you’re really feeling, because you have to be with yourself for such a long time on the skintrack. I don’t know how I’d handle being dropped at the top of something in a helicopter.

I still get a rush from it. That’s what keeps me coming back. I’m addicted. I’m an adrenaline junkie, for sure. But I also like to stay calculated. If I feel that I’m starting to get emotional, that scares me. I take the time to get centered, and do deep breathing. I have this place I like to be at before I step into big terrain.