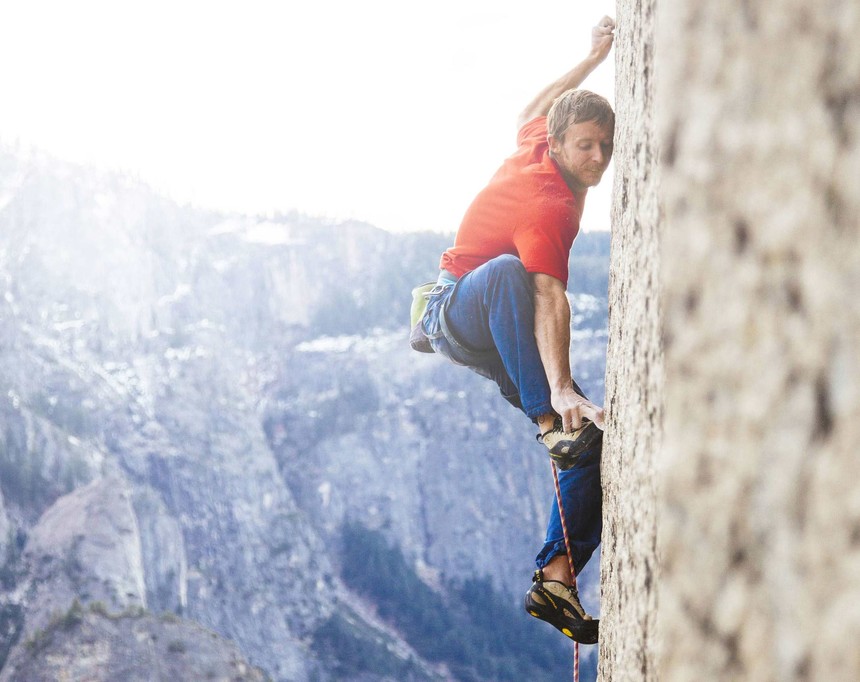 October and November are typically primo conditions for climbing. For someone like Tommy Caldwell, it means heading to Yosemite and having a month to work on ambitious projects. But 2020 isn’t a normal year. This November there’s a major election and it's frankly a pivotal one when it comes to climate change. In 2017, the United States withdrew from the Paris Climate Agreement, making the U.S. the only nation outside an accord aimed at reducing greenhouse gases. Meanwhile, things are rapidly changing throughout the nation from a warming climate. The West has witnessed unprecedented wildfires and droughts, hurricanes are becoming deadlier, and sea levels are rising. Time is of the essence for addressing these pertinent issues.

RELATED: Join Protect Our Winter’s Outdoor State for the 2020 Election

So, this fall will look a little different for Caldwell. Instead of getting after it on big walls, the climber is working alongside Protect Our Winters to advocate for climate-friendly policies and candidates. As the first climber to summit Yosemite’s 3,000-foot Dawn Wall, Caldwell is no stranger to tough odds. For him, protecting the places he loves is worth this arduous fight, even if it means putting on a suit and heading to Capitol Hill to meet with our lawmakers first hand. Recently he joined Protect Our Winter's "Outdoor State of Mind" initiative to help amplify the outdoor industry's voice in the coming election. By joining the Outdoor State, POW ensures that you'll have the inspiration and tools you need to make your voices heard. And the best part? Every week you'll get access to discussions led by POW ambassadors like Caldwell, Michelle Parker, Danny Davis, and more. Be sure to mark your calendars tomorrow for a chat with artist Zaria Forman and Dr. McKenzie Skiles of the University of Utah on communicating climate change through different mediums.

We caught up with Caldwell to learn more about his passion for advocacy and the ways we can get involved.

What prompted you to get involved with climate change advocacy?

Tommy Caldwell: I think I’ve always been a bit of an environmentalist but initially wasn’t too interested in dealing with policy. The world of politics seemed pretty slimy to me originally. But then I got invited to go on these lobby events to D.C. with this non-profit called The Access Fund. That experience taught me how these things worked, like how laws really impact the outdoors and can lead to real change or harm to the places we love. When you talk to the lawmakers, it’s easy to understand that their decisions matter. One classic example is our right to access public lands. I used to think that going climbing was a God-given right. Once you start to realize that public lands are dictated by public policy and the people writing laws, it makes you pay attention.

But even before that, I think being out in nature makes you motivated to protect it.

As someone who spends a lot of time outside, what kind of changes are you seeing as a result of climate change?

TC: Climbers tend to pinpoint the spots we love the most and then go back year after year after year. That consistency gives you a good understanding of how things are changing.

The place I go the most is Yosemite. I’ve been going down there since I was three years old. I would say in the last five or seven years things have changed pretty drastically. There have been these massive fires west of the Valley and in Yosemite National Park that have burned hundreds of thousands of acres. Drought-exacerbated beetle kill hit the Valley really hard, and it’s causing huge swaths of forest to be cut down. Yosemite Valley is changing from a dense pine forest to more of an oak tree savannah.

Even the climbing season has shifted by a month. Historically, October was the month to climb because it was a bit cooler. Now it’s too hot for the most part. November/December/January was always too wet, but now we’re seeing more and more prolonged dry spells. The season is shifting into the winter almost.

That’s interesting because most people think the biggest changes from climate change are shortened winters or melting glaciers. In reality, it’s affecting ecosystems in all kinds of ways.

TC: Changes with winter is a good one to start with because it’s easy to see the before and after pictures. It’s very easy to quantify those changes. But it’s happening everywhere.

Also what people don’t realize about the big mountain environments—where I also do a lot of climbing—is that the mountains are melting out in ways we’ve never seen before. As a result, there’s a ton of deadly rockfall. A lot of people have been killed by rockfall because it’s becoming way worse than it used to be. Big chunks of the mountain, especially in the Alps, are just falling. There are whole big walls that are just too dangerous to climb on now.

Sometimes you've got put on your best suit and head to Capitol Hill to advocate for the places you love. That's at least what Caldwell, Alex Honnold, and Sasha Digiulian have done in the past.

Protect Our Winters now has a POW Climb chapter. How did you become involved with that?

TC: I got involved with POW just before they launched POW Climb. I wasn’t completely on board with the group until I got invited to one of their training sessions, mostly because I just thought they focused on problems within the ski industry. Just from that training, I could see how hardworking and badass the team was, and how effective they were at amplifying their message. Plus, at the session, they brought in a climate scientist which made it an incredible learning experience to understand more about climate change.

POW’s reach has mostly been in the snowsport community, so the hope with POW climb was to branch that into the climbing community.

You’ve been in D.C. a few times with either the Access Fund or POW. What’s it like meeting with lawmakers firsthand?

TC: The weird thing is that as an organization POW represents climbers, skiers, runners, and outdoor recreationalists who are both Republicans and Democrats. We’re actually pretty bipartisan, whereas a lot of our elected officials think we’re going to be full tree huggers—so we’re trying to change that perception. There’s no reason why these issues can’t be bipartisan. There are more issues than you think that we can all find common ground on.

I did a bunch of lobbying for the Land and Water Conservation Fund, and that was super bipartisan. Everyone was on board. That basically gives you a window to the offices of people who were supporting something like that but not other climate change initiatives. You can find common ground and both sides of the aisle have to realize that something needs to change. I’ll say that from the past five years of going to D.C., the conversations are starting to change. There’s growing pressure to do something about what’s happening.

TC: The Outdoor State of Mind is POW’s creative way to quantify the power of the outdoor community and its voice. I think so many people who are on the fence about voting just don’t vote because they think it doesn’t make a difference. But when you realize that the outdoor industry makes up 50 million people, that’s actually more people than the most populous state in the country. It puts things into perspective and emphasizes the importance of getting out there and voting.

It’s a way to rally people and get them to the polls. When you go to D.C. and say that our community encompasses 50 million people, it gets the lawmakers’ attention. They respond to big numbers.

What are some good ways for our readers to get involved with POW?

TC: The easiest one is POW’s text for action. All you have to do is text OUTDOOR STATE to 65351 and they’ll blast you with the information on how to get involved.

The main thing is to go and vote. If you want to get educated on candidates and policies, POW has great voter guides through the POW action fund.

Personally, I’m into local advocacy and finding local non-profits with an environmental focus. If you can get involved with a community it can help perpetuate the good work they’re doing. A great tool for finding these organizations is Patagonia’s Action Works tool.