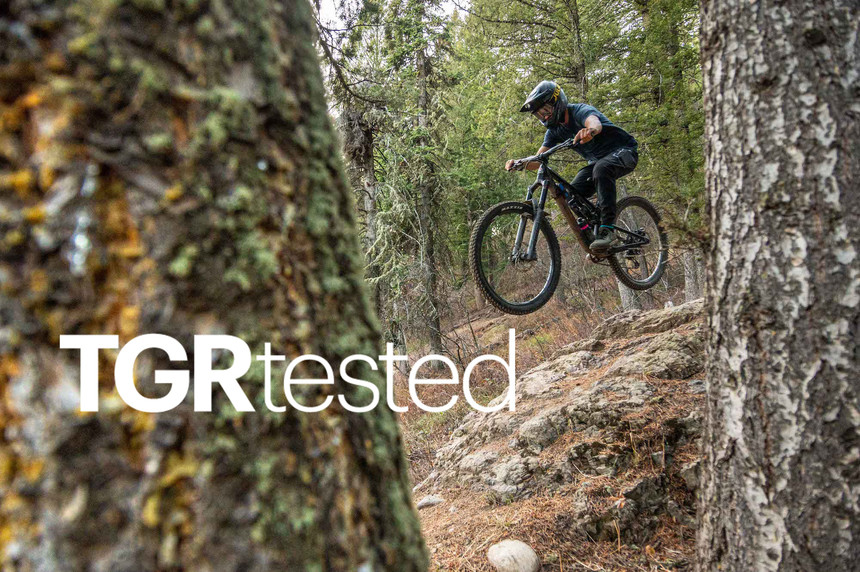 Enduro bikes are truly marvels of engineering. A certain someone this year claimed that we’ve reached the “golden age” of mountain biking, and I’m not going to fight that sentiment. These days, it’s tough to find a bike that’s bad, but it’s still rare to find a bike so balanced and capable that it truly could be a one-bike-fits-all kind of machine. That’s exactly where the 2021 Rocky Mountain Altitude comes in. Sure, it’s designed as enduro racing bike, so it loves speed and technical trails, but that design philosophy really comes down to a bike being a jack of all trades, because that’s what high-level enduro racing is. Earlier this summer, TGR reviewed the Rocky Mountain Slayer 29, which was the kind of the bike that shined when pushed hard, but felt like too much bike in mellow terrain. But after riding the 160mm travel 29”-wheeled Altitude, it became very clear why these similar looking bikes exist side-by-side in the Rocky Mountain lineup. Over the course of a few months, I was able to test the Altitude on a multitude of trails, including everything from Teton Pass DH laps (yum), dry desert epics, and soaking-wet PNW loam stashes. To me, what stood out the most was how the bike immediately felt like second nature to ride. It’s precise, it’s fast, and it’s trustworthy when it matters the most.

If it means anything, the fact that Jesse Melamed and the Rocky Mountain pro team raced the bike to resounding victory on the abbreviated EWS season this year shows its prowess at the highest levels of competition. Shockingly, I’m nowhere near as good a rider as any of those speed demons, but the Altitude made me feel more confident, helped me take some seconds off my Strava times, and got my absolutely psyched to dive headfirst into new-to-me trails whose gnarly reputation preceded them.

On the surface, there’s truly nothing remarkable about the Rocky Mountain Altitude. The bike used to a 27.5” enduro bike, and its intentions haven’t changed. With race times getting faster and faster, it made sense to give the bike a competitive edge by adding 29” wheels to the size L and XL. Size M has the option of either 27.5” or 29” wheels, while the S is a 27.5” only affair. Previously, one of my favorite bikes from Rocky Mountain was the Instinct BC, a long-travel 29er that we got to ride in Bentonville a few years back. The new Altitude is a much-refined version of that shred sled. 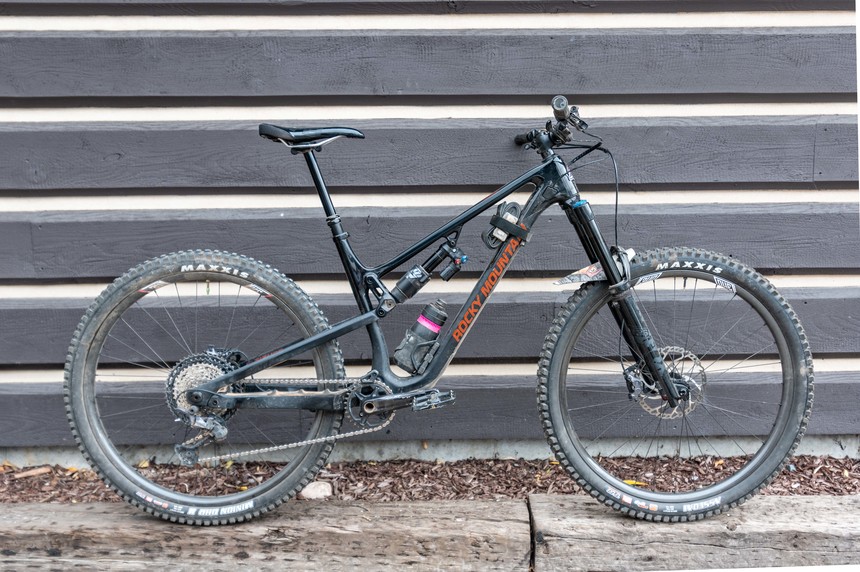 With clean lines and adjustable geometry, the frame is a marvel of engineering. At the C70 level, the spec leaves little to be desired, save the price tag. Max Ritter photo.

We tested a size large Carbon 70 version, specced with a solid kit of aluminum cockpit components and wheels, a Shimano XT drivetrain and brakes, and a combo of a 170mm Fox Performance Elite 36 fork and X2 shock. There’s no flashy Kashima coating here, but the fork does come with GRIP2 damper, which is about as good as it gets for store-bought suspension. The tire combo was also a plus, with a durable and grippy Maxxis Assegai Exo+ out front and a Maxxis DHRII Exo+ in the read. The spec at the Carbon 70 level is actually quite smart, but the $7000 price tag will raise an eyebrow or two, considering you can get bikes factory built with carbon wheels for about the same amount.

Price and build kit aside, looking deeper into the frame and kinematics is where the bike starts to stand out. First off, the frame is a piece of art. It’s clean lines, incredibly refined finish, light weight and clever details like a mudguard covering the gap between the rear wheel and the seat tube, guided internal cable routing, and a ribbed chainstay protector make it stand out. However, despite all the other details, my inner mechanic cringed a little bit that Rocky Mountain designed it with a press-ft BB92 bottom bracket. Still not a fan of press-fit BBs since they tend to creak and are a pain to service. 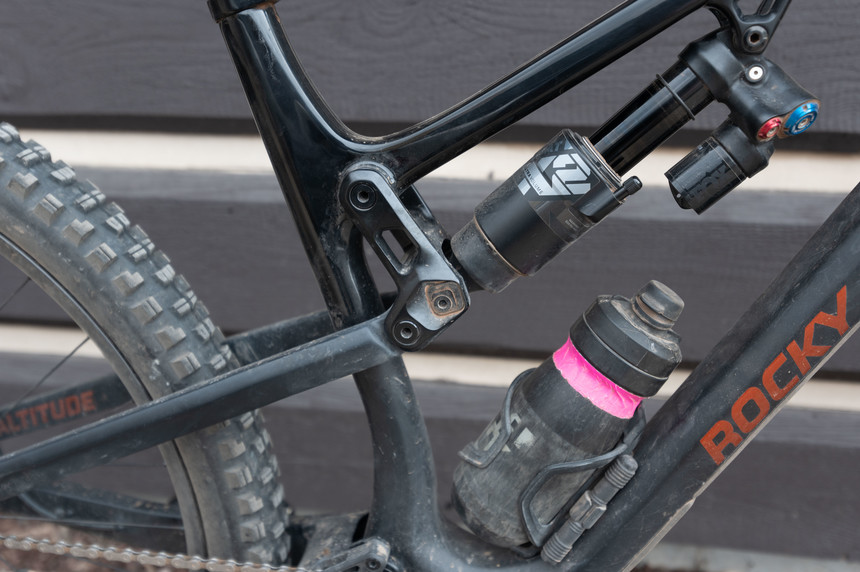 The Ride-9 geometry adjust system is found across the board on Rocky's bikes, and it serves to let the rider set up the bike to their liking. Max Ritter photo.

It’s clear the bike isn’t built with freeriding in mind like the Slayer, but rather for predictable handling at hair-raising speeds. It’s a race bike after all. Like many other bikes in the Rocky Mountain lineup, the Altitude’s frame features adjustable geometry in the form of the RIDE-9 shock mount hardware. By slightly adjusting the position of the rear shock mount, the head angle, seat tube angle, and bottom bracket height can change significantly with nine different settings. The new Altitude also features chainstays that can be adjusted by 10mm. In the slackest and shortest setting, which I ultimately ended up liking the most, a 64.4-degree HTA, 1249mm wheelbase, and 438mm rear center made the bike planted but not stuck to the ground, stable at speed, but able to jump and change direction exceptionally well. I’ll go more into that below.

When I get to review bikes, first impressions go a long way. With the Altitude, that first impression involved a shuttle lap on Teton Pass on a trail that I had spent most of the summer lapping on a downhill bike. Before I knew it, the lap was over – and that’s what stuck with me. There was absolutely no learning curve in figuring out how this thing wanted to be ridden, other than the fact that it begged to be ridden faster and faster as the trail got steeper and more twisty. In a nutshell, the bike wants to go really really fast, and it will do most of the work to help you hit those speeds. 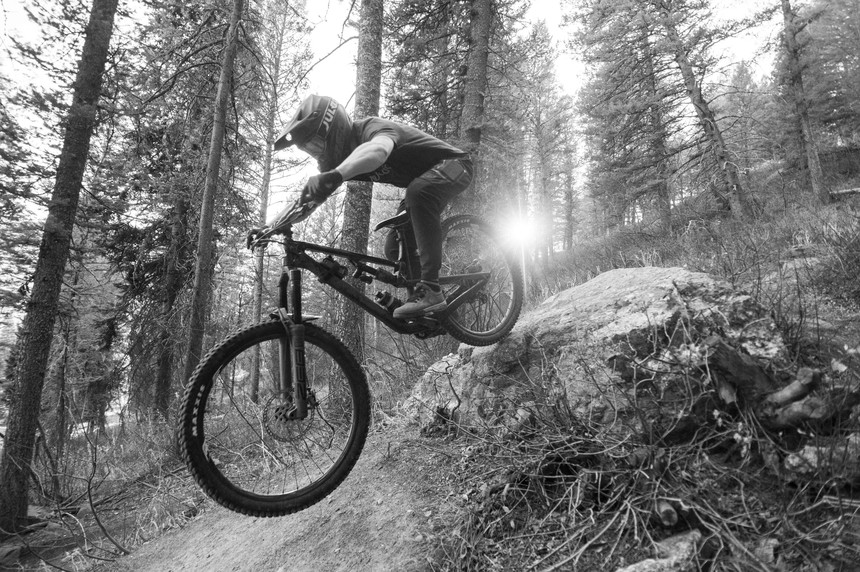 At high speeds in technical terrain, the bike truly comes alive, but it's quite approachable for any mid- to high-level rider. In other words, you don't need to be a pro to harness its capabilities. Lily Krass photo.

As the summer progressed into fall, I got the chance to put the bike through its paces on more varied terrain, including lots of long pedal-access descents. I’m talking about the kind of riding you find in the PNW like in Bellingham and the I-90 corridor near Seattle: Long fire roads or easy singletrack climbs to gnarly and sustained descents. On the uphill, the bike feels light and poppy, doesn’t get hung up on technical steps and roots like many other long-travel bikes, and is light enough to leave some gas in the tank for later. With a moderately long reach, the climbing position is comfortably upright, so I didn’t have a problem with 3000+ feet of climbing in one go. Grinding up fire roads warrants the use of the shock’s climb switch, but hey that’s what those are there for, so why not?

Lots of bikes crave speed, especially any modern enduro bike. But once a rider hits those speeds, a great bike stands out from a good bike in how it handles when it comes time to do anything but go in a straight line. This is where the Altitude surprised me the most. Even at speeds that made me feel like Jesse Melamed (though I know I wasn’t even close), it still felt responsive and alive. That meant I could easily pick up the front wheel to manual through sections, pop and bunny hop over obstacles, and it would just lock into corners and shoot me out the other side facing the right direction no matter how fast or slow I entered. Throwing in a couple of pedal strokes had it rocketing away from features that had me hung up and forced me to slow down. The frame’s kinematics keep it supple in the initial stroke but plenty supportive when it comes time to put down watts, translating pedal input into direct forward motion with little to no energy loss. That quick acceleration really helps if you need an extra ounce of speed to clear a double or re-gain speed after a turn.

Tying all those characteristics together, it’s clear the bike is designed to win races. It carries speed, re-gains speed, and the massive amounts of traction it offers make it forgiving enough to give the rider the confidence to blast down a trail with a decent margin for error. Again, we’re not all looking for the fastest time down the hill, but it translates to this bike being REALLY easy to ride, and in my book, that’s a huge win no matter what your intentions are. 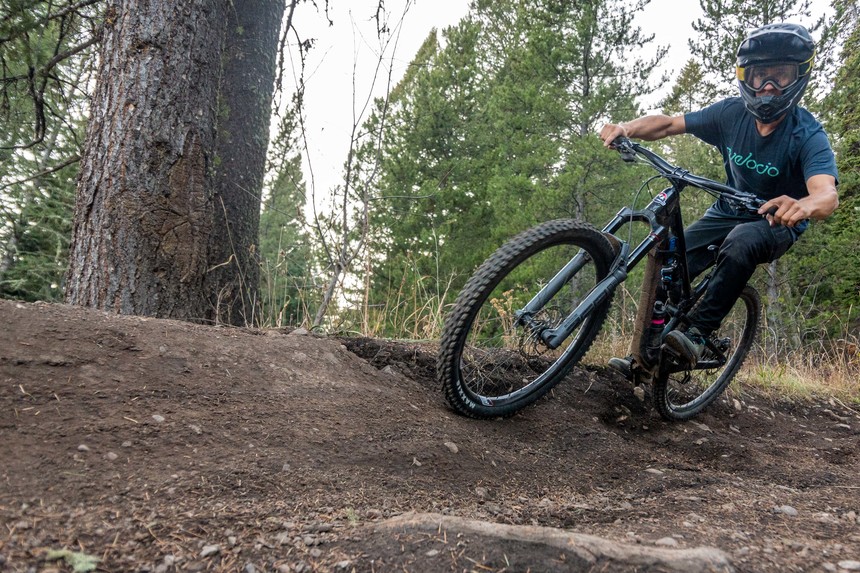 Corners, berms, oh my. The Altitude has an uncanny ability to not only hold speed, but also re-gain in really really quickly after corners or other obstacles. Matt DiTullio photo.

So, what could possibly be wrong with this bike? It’s expensive. Like REALLY expensive. I know component choice is more of a personal preference, but at $6,999, I’d like to see some truly high-end components on the bike. How about a carbon handlebar or wheels? Or some Factory-level suspension? No complaints about any of the components, they are what I’d probably choose were it up to me, but for that price tag? Might be a tough choice, but with eight models of the bike to choose from, there are plenty of options for everyone's budget.

Out of all the bikes I rode in 2020, I decided to save the best for last. In a nutshell the Rocky Mountain Altitude might be single best do-it-all bike I’ve ridden to date. It excels at high speed in both scary technical terrain as well as your afternoon romp around the local XC trails. Hop aboard, and it welcomes with you with open arms and asks, “hey friend, wanna go fast today?” And my answer was yes. Every time. I’ll let you decide your own thoughts on the price tag, but after riding it for just a few months, that sensation of pure thrill at speed sure seemed worth it. 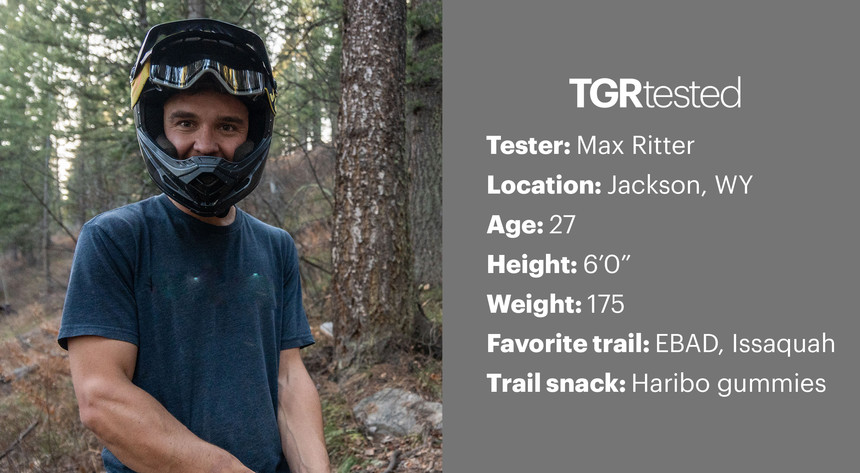