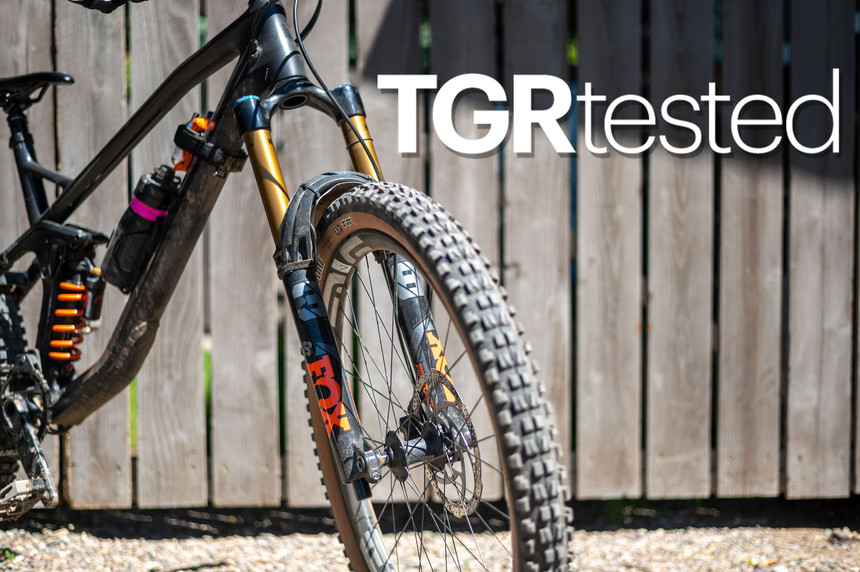 Check out what we thought of the all-new Fox Float 38 below. Max Ritter photo.

Fox released the Float 38 right in the middle of a worldwide pandemic that stretched healthcare resources thinner than most in our lifetime had ever seen. Riding bikes aggressively was a bad idea, so we took it easy at first. Call it somewhat unlucky timing on Fox’s part, but after some weeks of waiting, we finally got the fork out for its intended purpose. Buy the fork here.

The 38 is a decidedly gravity-oriented fork, with its intended use including things like going faster than you ever have before, hitting big jumps, and making your enduro bike feel like a DH rig. In all reality, it does all those things extremely well, and keeps your bike feeling lighter and more composed than ever. I tested the 170mm travel 27.5” version of the Factory Float 38, complete with Fox’s updated GRIP2 damper. I bolted it to the front of a size large Canyon Strive CF, running a Marzocchi Bomber CR Coil shock in the rear. The previous fork on the bike was the already awesome Marzocchi Bomber Z1 (more or less a Fox 36 in disguise) so I was skeptical on what could improve over one of the best forks I had ever ridden. Turns out, a good deal. From the first ride, the new 38 begged me to push it harder and faster, giving me more support through corners and rough terrain, and never felt harsh even after thousands of feet of descending through steep and chewed up trails. 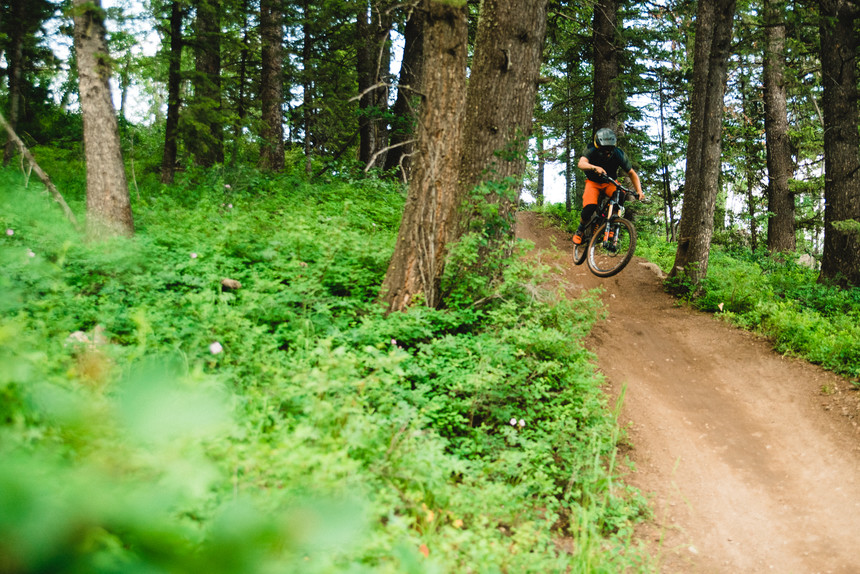 The 38 is at home anywhere from the bike park to your favorite tech trails. Katie Lozancich photo.

The Float 38 begs to ask, “What am I?” Is it an enduro racing fork? A single-crown freeride fork? At up to 180mm travel with beefy 38mm stanchions, this thing really does cross disciplines. Formerly the Float 36 was considered the pinnacle of “enduro” forks, but now the 38 firmly occupies that space in the Fox lineup.

The 38mm stanchions house Fox’s tried and true EVOL air spring on the left, and a slightly tweaked version of their existing GRIP 2 damper on the right. The EVOL spring is adapted to the 38mm legs and requires slightly higher pressure than in the 36 as well as 38mm-specific volume spacers. The GRIP 2 damper has been updated with Fox’s Variable Valve Control (VVC) tech for its high-speed compression circuit giving the user more ability to fine-tune the fork’s setup. With the damper, you get complete control over high- and low-speed compression as well as high- and low-speed rebound. 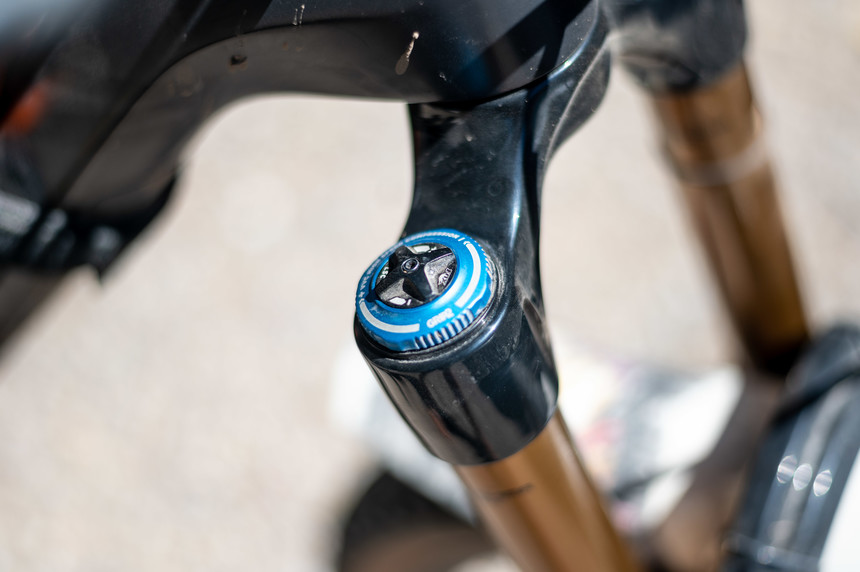 Fox's tried-and-true GRIP2 damper gives you all the adjustability you could need. Max Ritter photo.

The back of each fork leg also gets air bleed buttons and air channels on the lowers. This should help prevent any unwanted pressure buildup in the fork’s lower legs by slightly increasing air volume and adding a relief valve. The dual crown 40s have had this feature for a few years, so it’s great to see it on the 38 and 36 as well. The bleed buttons do the same thing as inserting a zip tie behind your dust seals would do.

Finally, the re-designed fork crown and a new elliptically profiled steerer tube promise to stiffen up the fork chassis for riding hard and fast. The new lowers add a few mm of axle-to-crown height to the front end of your bike, over the 36 and the Z1 so expect your bike to be slightly slacker and taller.

With so many adjustments, it admittedly takes a little while to get the GRIP 2 and the air spring set up feeling the way you might like. Everyone seems to ask, “what settings do you use?” My response is usually: “find out yourself!” And I truly mean it. Everyone’s riding style is different, so finding what settings suit you best will take a few runs.

Just like any Fox fork, I suggest starting with the pressure and rebound settings corresponding to your weight that are printed on the fork leg, and with high/low compression damping set somewhere in the middle. Take a run on some variable terrain and see how it feels before adjusting compression and rebound. Having independent control over all four compression and rebound circuits is a lot, but you can really dial stuff in to your liking. I prefer settings that allow the fork to feel lively and poppy for small trail features while still keeping traction through roots and rocks. 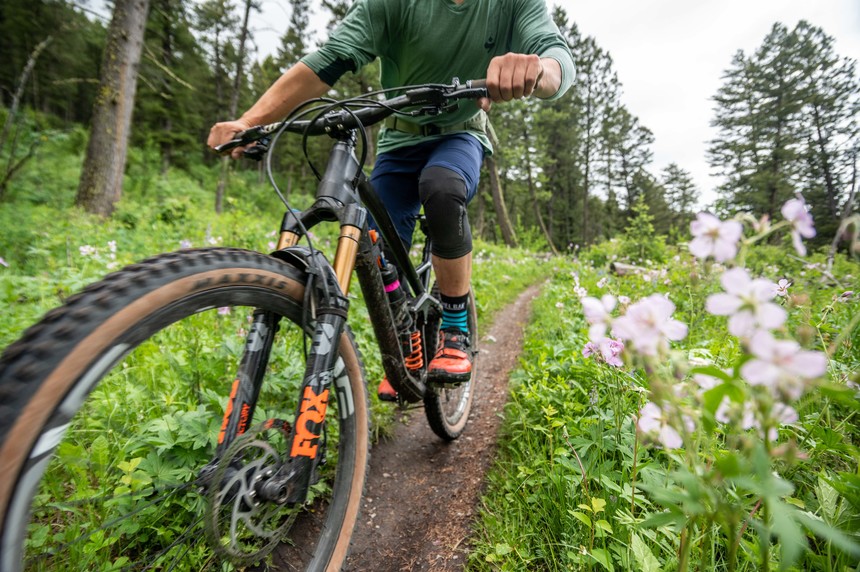 While the 38 is certainly designed for gnarly terrain, it doesn't feel dead on the trail when things are bit mellower. Lily Krass photo.

Living at altitude, the air bleed buttons on the lowers are actually incredibly useful and allow me to equalize the pressure of the internals to the atmospheric pressure. This ensures the fork feels the same no matter the altitude, a bonus for traveling or riding in places with huge elevation change.

I’m six feet tall and weigh 180 pounds in gear, and for the rough trails we have around the Tetons, I ended up being happiest on the following settings:

The Fox Float 38 is a beast of a fork that inspires confidence and hard riding no matter what’s ahead of you on the trail. It’s a muscle car of mountain bike forks that just begs you to let go of the brakes and let gravity take over for much longer than it probably should. On my first few rides I noticed myself going significantly faster through sections of trail I would have normally braked though, keeping up with my (much) faster friends, pushing harder while maintaining traction into corners, and easily clearing doubles and small gaps on the trail that I had previously overlooked. The fork is incredibly responsive and poppy but has enough squish and plushness to take the edge off nearly any kind of impact. Really, it all comes down to mid-stroke support. 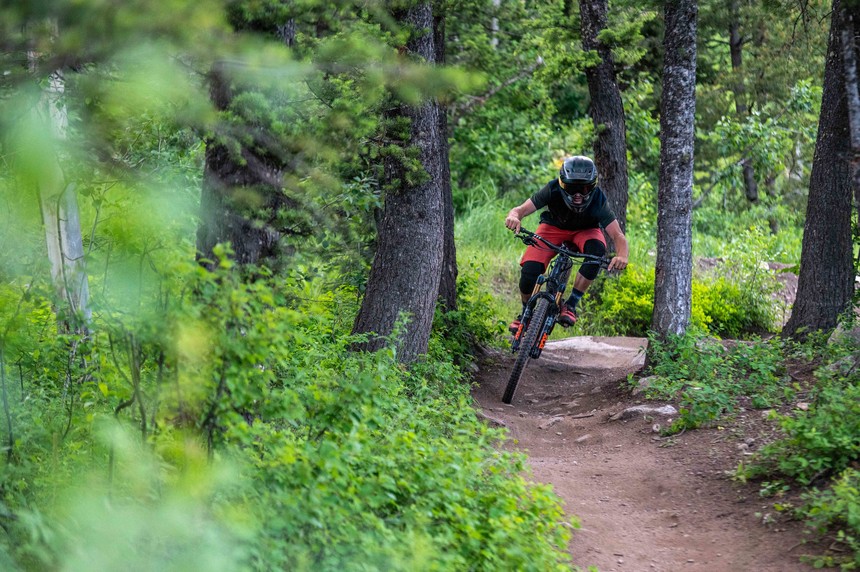 Mid-stroke support is one of those things you don’t know you’re missing until you experience it. Having a fork ride higher in its travel preserves your bike’s geometry, allowing you take advantage of that slack head angle when you need it most – going fast through chewed up gnar. Compared to the Z1, Rock Shox’s Lyrik, and older versions of the Fox 36, The Float 38 offers much better mid-stroke support, staying higher in its travel without compromising any small-bump sensitivity. On the trail, this provides more traction, ultimately giving more control over the front of your bike, especially on really steep scary stuff.

Gibberish to you? Small-bump sensitivity is how plush the fork feels going over something with lots of small irregularities in the trail, like rough gravel or brake bumps. Lots of forks start to feel harsh on these surfaces, but the 38 smooths that out like butter, preventing arm and hand fatigue and letting you stay loose on your bike while providing loads of traction. Once it comes time for bigger impacts, like landing jumps and drops, the fork smooths those out too without giving up any support against rider input like pumping or pushing through corners or rollers. Upon reaching the bottom of your travel off a huge drop, the fork ramps up quickly, smoothing out those harsh bottom-outs. Of course, if you don't like these attributes in your fork, you can effectively tune it any which way using the adjustments on the GRIP2 damper. 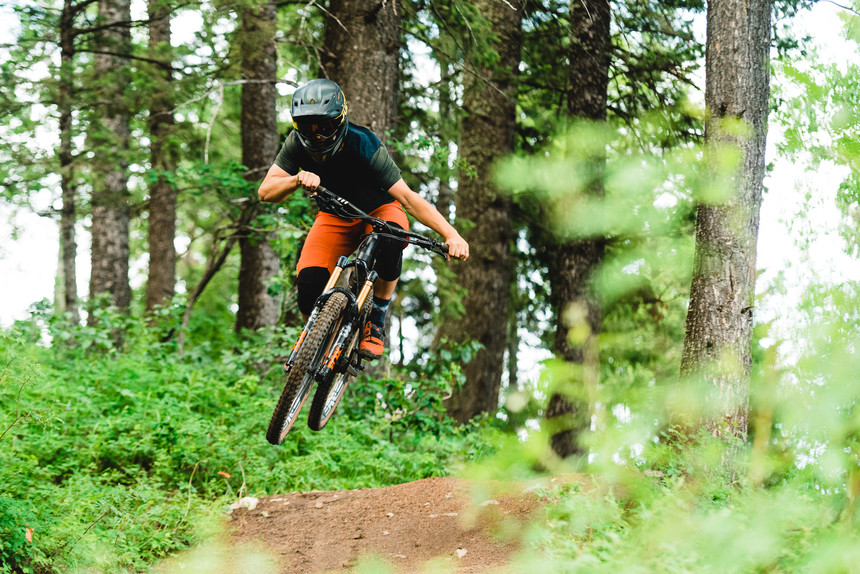 The tuneability of the GRIP 2 damper and support of the EVOL air spring lets you set up the fork to feel both lively and playful, and also ultra-damp for rough sections. Katie Lozancich photo.

So far, I’ve ridden the 38 on everything from all-day epic backcountry rides in Idaho’s Big Hole mountains, to freeride shuttle laps on Teton Pass, to quick lunch rides up Snow King. It’s stood up to everything and given me confidence to push harder than I ever have on this bike. Let’s put it this way – I’ve pushed my own limits on the bike since starting to ride it, and I don’t seem to be anywhere near the limits of the fork. I’m looking forward to putting it to the test against the clock in some enduro races later this summer.

Even though this fork is designed for descending hard and fast, it also seemed to make technical climbing easier. Maybe it was the reduced weight over the Z1 I was used to, or the raised stack height, but I found myself cleaning more uphill tech sections than I had before. 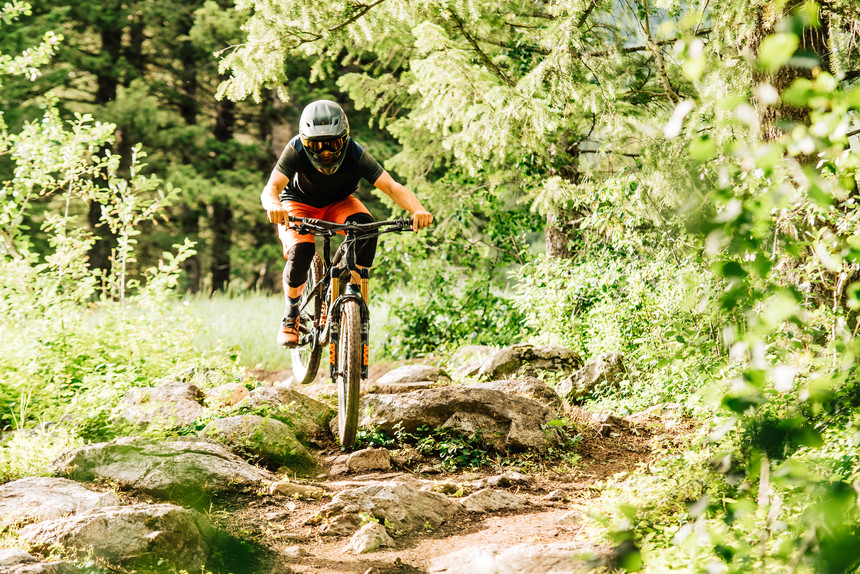 The fork stays glued to the ground when it needs to. Katie Lozancich photo.

A fork like this certainly isn’t for everyone, but for aggressive riders that are looking for a fork that can handle abuse from racing, bike park laps, or big-mountain riding, the Fox Float 38 is an excellent choice. At 2180 grams, it’s only 200 grams heavier than the new Float 36 (and much lighter than the existing Z1) and provides a more capable platform for gnarly riding. If you are a heavy (160+ lbs) rider and own an enduro bike that takes a 160-180mm fork, the 38 is the way to go. This one is for the Nomads, the Slayers, the Slashes, and the Megatowers of the world. If not, it might be a bit overkill, so the Fox 36 would seem to make more sense.

Now that we don’t have to hold back on our bikes anymore, it’s time to keep riding and see how well the 38 holds up over time. I’m excited to get faster.

Dynafit's brand-new Radical Pro boot is a ski touring boot built for skiers. | Max Ritter photo. Ski touring boots are arguably the most hotly-contested niche sector of the industry, with consumers demanding all manner of things from what they put on their feet for big days in the mountains. We want them to be as light as a skimo boot. We want them to be as stiff as an alpine race boot. We want more range of motion than our ankles even allow. We want space-age materials that can be molded

TGR staff writer Katie Lozancich out for a spring walk in Grand Teton National Park. Charlotte Percle photo. Ah, spring. The sun is shining, the birds are chirping, and it’s now the season for 5 AM wake-ups to go corn hunting in the alpine. While the temptation to head south for some desert adventures might seem alluring, it’s worth putting them off a little longer to squeeze those last spring turns from the mountains. Plus, not having to worry about frostbite or wearing a gazillion