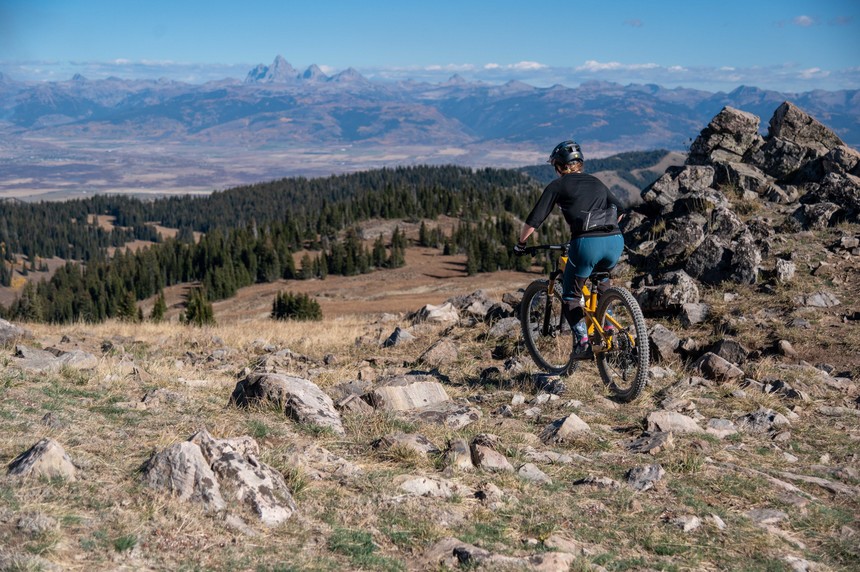 Trek's new Fuel Ex is one of the best all-rounders we've ever tested. | Max Ritter photo.

I love to spend hours in the saddle, but the goal is always the same: flipping it around and hooting and hollering on the way back down. For all but the most masochistic, climbing is a means to an end, so it’s been fun to see lots of trail bikes getting a little longer, slacker, and squishier, one of the most exciting being the totally overhauled sixth generation Trek Fuel Ex.

The redesigned Fuel Ex is a confident adventure-ready trail bike, in it for the long haul on burly pedals and beefed up enough to handle steep rough descents. I really don’t think one-quiver bikes exist, but if they did, this might be the one.

My everyday bike is a Trek Slash, which I love for all-out speed and its composure in sustained tech. Long, slack bikes are what I’m drawn to, especially if the clock is running, but I was excited to switch things up with the new Fuel Ex, decidedly more versatile, nimble, and a killer on long climbs. This fall, I tested the new sixth gen bike on long adventure rides in the Rockies, shuttle laps on Teton Pass, and quick evening cross-country spins. Whether I was settling in for a few hours in the saddle, or throwing my leg over it for a fast descent, I was blown away by just how much this bike could handle.

The 2023 Fuel Ex features a fully re-designed frame, with a slightly longer reach, steeper seat tube angle, and slacker head tube; all geared towards upping the descending chops on this already well-rounded trail bike. To put some quick numbers to it compared to the previous version: reach increased by 20mm, head angle goes from 66 to 64.5 (in the low setting), and the seat angle is about two degrees steeper. 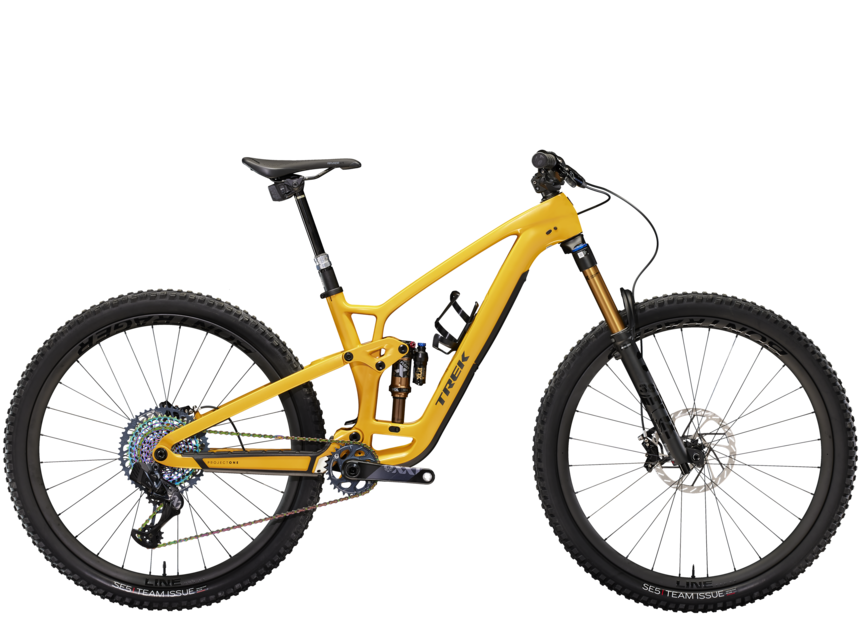 The Fuel Ex features 150mm of travel in the front and 140mm in the back, a step up from the 140/130 in the fifth-gen bikes. Guided internal routing combined with wireless shifting and dropper on our tester bike (the 9.9 XX1 AXS), made for a clean look and quiet ride feel - no junk criss crossing or bouncing around inside the frame.

The new Fuel Ex comes in seven build kits (the Fuel Ex 5 is a carryover), with three aluminum frame options and five carbon frames. We tested the 9.9 XX1 AXS, which was spec’d with a Fox Factory 36 fork and Fox Factory Float X rear shock, and a lightweight Bontrager Line Pro carbon wheelset. Top of the line SRAM Code RSC brakes and an XX1 Eagle AXS drivetrain are, well, about as good as it gets: quiet, responsive, and so far very reliable. This version will set you back a staggering $10,750, but build kits start at $3700 - so there is something for most people here. 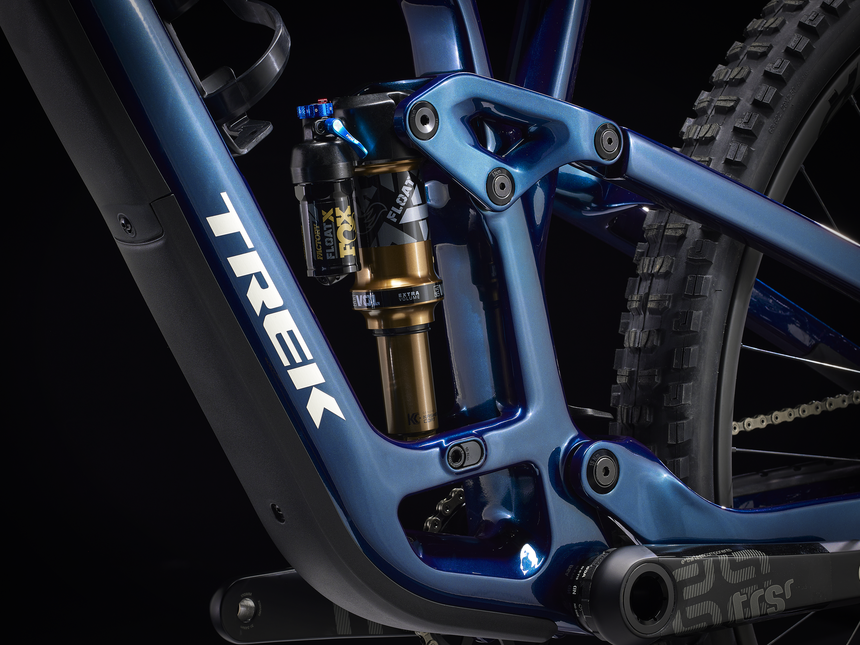 A look at some of the adjustment points including a shock flip chip to change progression and the Mino Link in the seat stay to change geometry. | Trek photo.

The sixth-gen Fuel Ex also has a whole host of adjustment options that allow you to dial it in to your own references. As always, there’s a high and low Mino Link setting (I rode mostly in low), as well as three different settings for headset adjustments. You can also mullet this thing by adding a 160mm fork and the Mino High setting, which is pretty cool if you’re looking for something a little more playful (all but the size XS comes with 29-inch wheels). We didn't set it up with a mixed wheel platform but I might consider that in the future since it felt a bit sluggish through tight corners. There's also the option to change the shock progression - particularly useful if you'd like to run a coil shock. Nitpicky riders who love to mess with settings will dig the possibilities, and those (like me) who stay far away from wrenching on my own bike (sorry not sorry) will be forever happy riding in the low and slack set up. 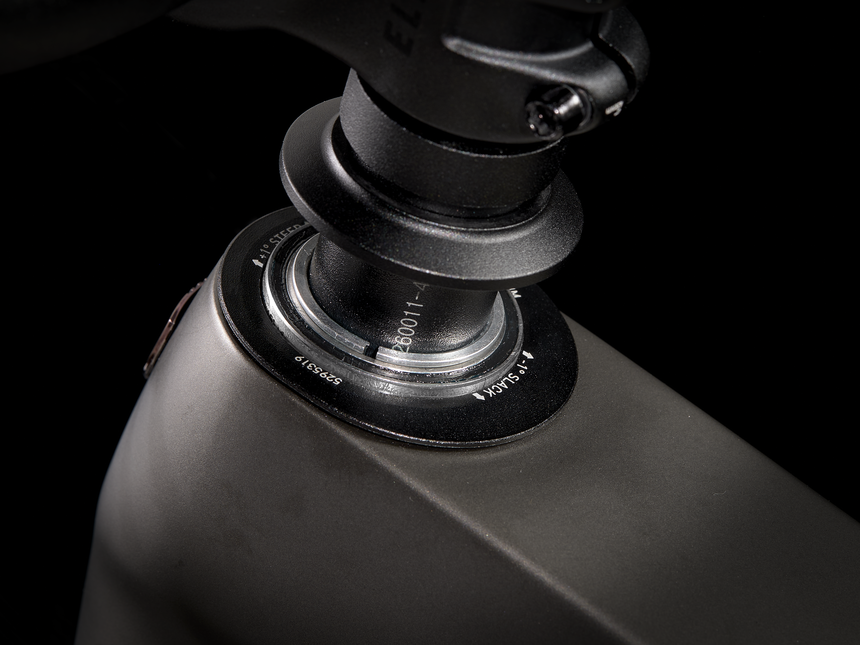 The bike comes included with a a geo-adjust headset . | Trek photo.

The stock 820mm bar is colossal, crucial to cut down for all but the tallest and widest humans - it’s worthy to note that on the 9.9, it’s Bontrager’s own integrated RSL bar/stem that, while pretty futuristic looking, doesn’t allow for any adjustment other than stack height. I found the bar position to be comfortable, but I’d say the jury is still out on whether integrated cockpits actually make sense. The sixth gen Fuel Ex also features internal storage in both the alloy and carbon frames, a nice touch for stashing a flat kit or a few snacks if you prefer to throw caution to the wind and lean on your friends for tools.

On trail, I felt like I could point the Fuel Ex down pretty much anything. It’s quiet and composed while navigating rock gardens and steep roots, and it carries speed well on smoother XC trails. It feels light enough that I anticipated a bit of deflection and wandering while trying to maintain a fast pace in tech, but that wasn’t the case at all. It maintained stability when I gave in to gravity, something I really noticed while blasting down chewed up moto trails littered with loose rocks in Idaho’s Big Hole mountains.

For fun’s sake, I definitely wouldn't prefer it to a full-on enduro bike on steep tech like Lithium on Teton Pass, but it can definitely handle the heat in “real” terrain, something that speaks volumes about the downhill-oriented geo updates. But compared to slacker and more planted bikes, the nimble Fuel Ex is a lot easier to correct a mistake on the fly. 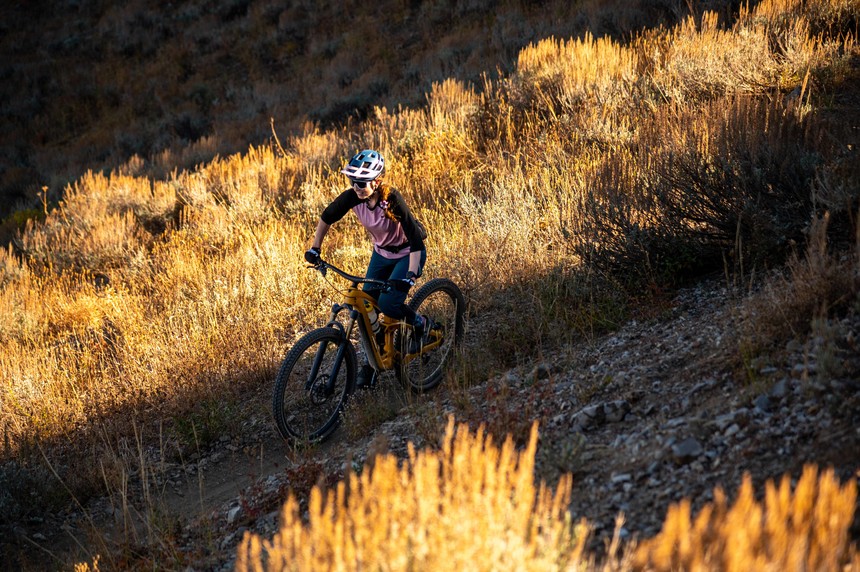 Since I haven’t spent much time on the previous generation Fuel Ex, I can’t truly say if there’s a huge hit in climbing efficiency. Honestly, I felt like a hero on the uphill (no doubt compared to my clunky Slash), and for the average non spandex-clad rider, the Fuel Ex will feel like a serious climbing machine.

While I wouldn’t dub this bike as a total fun hog, it is quite energetic, easy to get in the air and far away from boring. I feel like mid-travel trail bikes can sometimes feel like they’re just okay at everything, a compromise all around, but the Fuel Ex is genuinely an exciting bike to hop aboard. 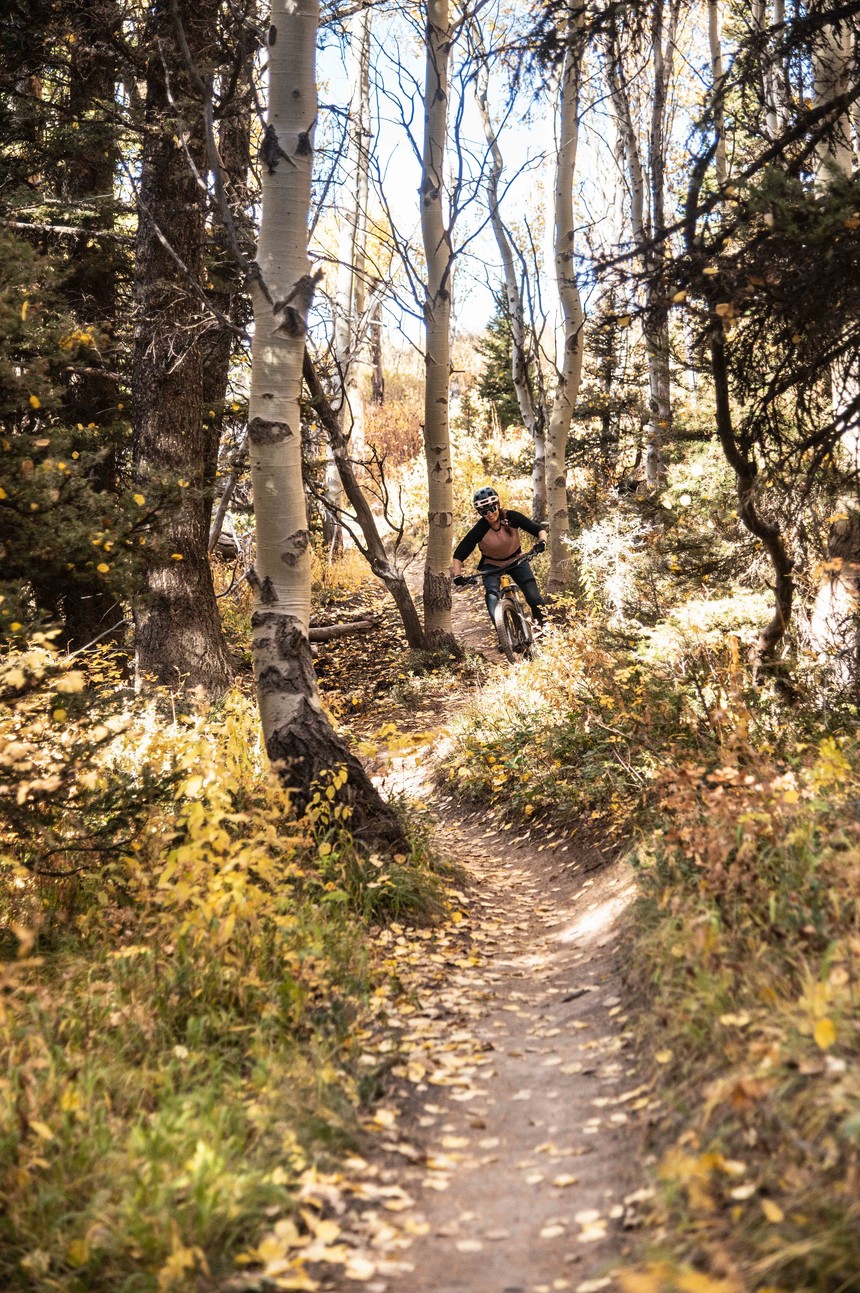 For a one-bike quiver, the Trek Fuel Ex would be a phenomenal choice. | Max Ritter photo.

While playful and energetic, I wouldn’t say cornering is this bike’s strong suit, noticing that it felt a little sluggish in tight turns. I think the extra-wide cockpit and slacker head tube force more straightline stability, and I was hoping for a bit more response when things got windy. Tossing a 27.5-inch rear wheel on the back would likely help here.

I really, really love this bike. As a rider who’s become accustomed to a beefier slacked out enduro ride, I was floored at how capable the Fuel Ex felt. Except for a few of the extra loose and chundery descents, the Fuel Ex felt calm and composed while blasting downhill - in most cases truly feels like a mini-Slash. I’d feel confident taking this bike onto pretty much any terrain, save for truly steep and technical bike park trails. If I had to choose one bike to ride for 85 percent of the season (not counting bike park days and enduro races), this would be the ticket for sure.

Get the Fuel Ex here.

Love my new Fuel EX!  Have ridden some pretty gnarly stuff with no problem and it climbs great! Tuckpointing St. Louis