There’s never been a proper career ladder for women to progress in freeride mountain biking. This matters because a sport can’t grow unless the athletes are given the tools to succeed. When you look at the industry, the accessibility for female freeriders has notoriously been dismal. At the Crankworx mountain biking festival, the opportunities to compete in style events were few and far between. Women’s slopestyle events have usually been nonexistent, small, or completely grassroots. And, of course, there's Red Bull Rampage, you know, the biggest freeride event in history that’s never had a female competitor since its inception in 2001. When you don’t have a system for a group of people to succeed it creates outliers. Imagine if these people didn’t have to fight to be acknowledged. What if, instead, they had a community to grow and progress with?

Thankfully, 2019 opened the door to a powerful women’s mountain biking movement. We saw major breakthroughs in freeride mountain biking for women.  Speed and Style now has a women's division at all stops of the Crankworx World Tour. Red Bull launched Formation, a Rampage-style progression session, to create the athlete pool that could someday host a women’s version of Rampage. Lastly, the first-ever Women’s Slopestyle Tour (WST) was launched with three successful stops. We caught up WST co-founder and organizer Cortney Knudson to learn more about how the tour went for its debut run: 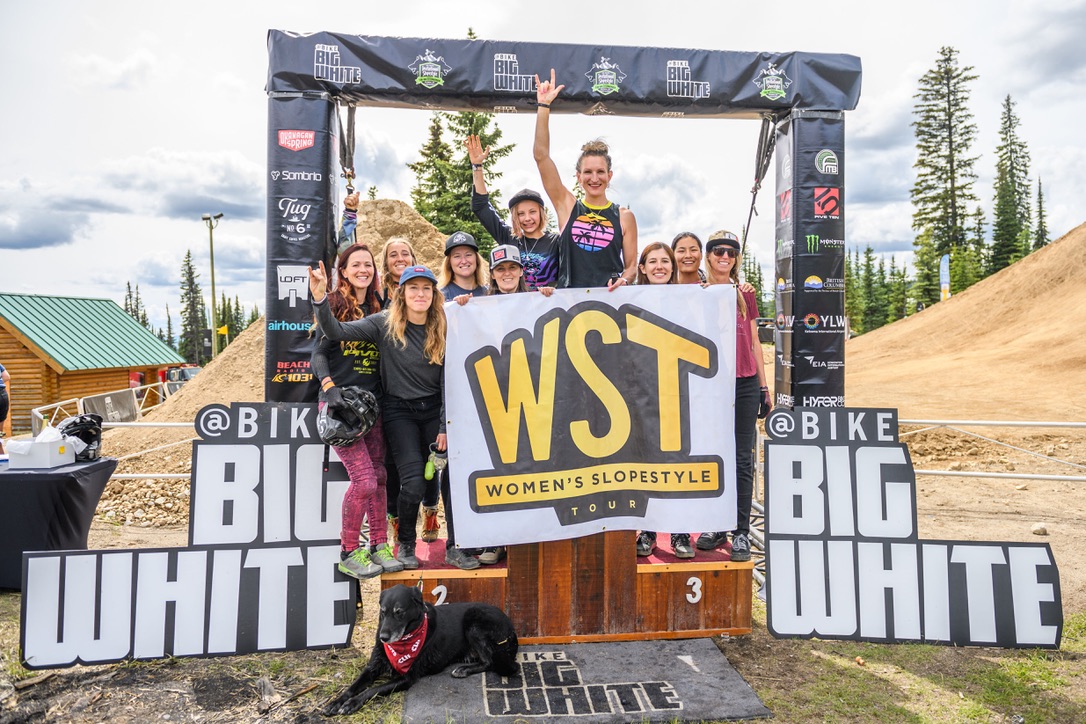 The athletes celebrate after an exciting day of competition at Big White. Bob Plump photo

Congratulations on launching your first ever tour last year! About how many girls competed?

Cortney Knudson: We had three stops. Seattle, WA for the Sugar Showdown, Kelowna, British Columbia, for Big White, and Truckee, CA for The Little Big. The total number of competitors in the 18 and above category was probably about 30. There were three in the 11-17 category. It was a start for what’s to come for 2020.

What kind of tricks were the girls throwing?

CK: I think the most common tricks were no hander, no footer and tables. Some really great tables! Everyone says that is the hardest trick. There were a few backflips, tuck no handers, no foot to no foot cans!

Were there any new faces that surprised you?

CK: Kaylee Gibbs, Chelsea Kimball, Casey Brown, Jordy Scott. From the 11-17 division, new faces were Teagan Heap and Taylor Betonte. We’ve been hosting jump jams and competitions for the last 10 years and it was exciting to see new faces competing!

What needs to be improved for next year?

CK: There is always room for improvement. I think the most important is nailing dates for 2020 so people can come join our tour given that MTB season has a lot going on. The packed season makes it challenging to compete in different events.

Marketing and Media needs to be improved. Sponsorship needs to happen to help grow what we are doing. We are changing the world for women that like to jump! Consistency with rules and following the model of how the men’s events have been run. Even though this tour is new, we need the rules to be consistent so we can grow the sport. The men started this and have been doing it for years, so modeling what they’ve done seems to be a good starting point for us.

Our course features may be smaller but having consistent age groups and proper judging will help us grow. I think it is also important to have courses to suit our riding level with a bit of difficulty to be pushed—but not so difficult people are getting broken off. 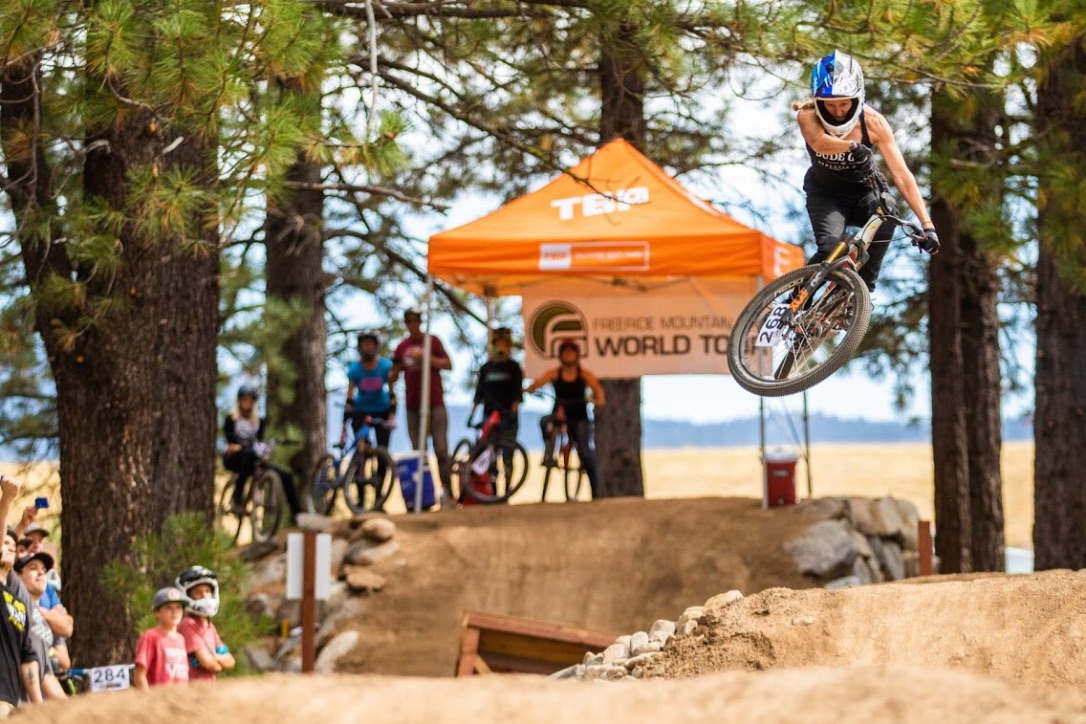 Knudson getting after it during Truckee's Little Big event. Josh Woodward photo.

Can you describe a favorite moment from the tour?

CK: Honestly I can’t say just one. One was that Louise Hatton—who ran the Big White competition—had asked the bike patrollers on course to stay later so that the girls could practice. It rained a few days before, and the course was too wet to ride. Everyone wanted more time to practice. Patrollers agreed and so we had one hour to learn the course after the AM boys finished their competition. I have never been under such a tight time constraint to learn a new course or line. It was exciting and terrifying! But all the girls competing were super supportive and willing to give advice about all the features. I could have never done it without them. Stephanie Nychka towing me in and everyone cheering me on. It ended up being a perfect environment to progress in. The bronze course was also right next to the gold course so we were meshed in with the pro men while they were practicing on the bigger course. The whole time we were sharing the stoke on the smaller features. Thank you, Big White!

Another favorite moment of mine was at Little Big. Teagan Heap arrived and was looking at the course and I asked if she was stoked to be here and be competing. Her face lit up with a huge smile. She was excited to ride. I asked her if she was comfortable with the course and she exclaimed, “Sure, I will try!”

How did the women progress over the course of these three events?

CK: I think everyone grew and pushed their riding. All three courses were completely different.

Sugar Showdown had two big air jumps. Big White was a slopestyle course with seven-foot lips, a step up to drop, and a jump with the option of a boner log. In total there were five features. Little Big was also a slopestyle course with four-foot lips, a satellite wall ride with the option to jump in and out, boner log, whales tails, and up box. All in all, 11 features. The women all got to ride and learn new features that most had never hit before. New things on courses are always humbling—but so fun to learn and add to the repertoire of tricks.

What did the younger girls think of the new competition?

CK: They were so stoked! The tour gave them the chance to ride the same course with the older women and be pushed by these older mentors. I think they all enjoyed the experiences and making new riding friends that love to jump. They are all amazing and I guarantee in a year or two they will surpass us! I cannot wait for this category to grow.

Opening and closing day were always special dates to mark on the calendar for the ski industry, but now with COVID-19, we’ve got a new one to celebrate: reopening day. A lucky few ski resorts in the United States have been able to resume resort operations due to flattening transmission curves and loosening health restrictions. Mt. Bachelor Ski Resort in Bend, Oregon was one of them, and they were eager to reopen this past weekend after Deschutes county was given the go-ahead by Oregon

Oaxaca, Mexico Should Be On Your MTB Bucket List

Oaxaca, Mexico Should Be On Your MTB Bucket List

If steep, raw, and never-ending trails sound like your cup of tea when it comes to mountain biking, Oaxaca, Mexico is the place to be. Combine said trail riding with some of the most vibrant culture, amazing food and unique travel experiences you can get, and a trip to southern Mexico turns into a trip of a lifetime. Home to the Sierra Norte, a rugged mountain range with a unique network of shuttle-able mountain bike trails, and local guide Alvaro Gutierrez, Oaxaca is paradise for mountain

Virgin, Utah is renowned as the home of some of North America's gnarliest mountain biking, surrounded by loose and steep lines down the countless nearby mesas. A bike that can hold together even in the face of Rampage-caliber abuse is good to go just about anywhere, which likely explains why athlete Graham Agassiz, joined by Kyle Norbraten and Mike Giese, headed down to Virgin to put their Evil Bike Co. steeds to the test. RELATED: Graham Agassiz- A Life Forged in MTB The region's loose red